You know how sometimes you don’t get to pick where you eat, because you have to pretend to be accommodating and nice?

So that’s how I ended up at Dos Caminos in midtown.

It wasn’t even a real date. (Thus my complete comfort in whipping out my camera and announcing I was going to blog the meal.) 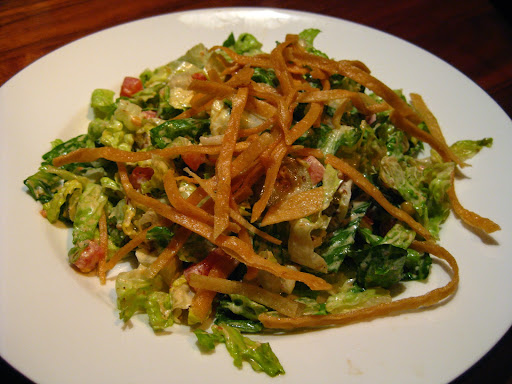 Because I like salad and I like to try what places offer in the way of salad, we started with the chopped salad. Someone in the kitchen must’ve been pushed while making this, because it tasted like someone dropped the entire jar of cumin in it. Overwhelmingly smoky, though the produce was fresh and I enjoyed the grilled corn in it… I wish there’d been avocado in there. And less cumin. Definitely less cumin.

Chorizo fundido, which suffered from two things: the skimpy bits of chorizo on top, but even worse? they gave us warm tortillas with this. Not chips. This led to each bite being overwhelmingly soft, lacking any texture unless you had a bit of chorizo in there as well – and was just kind of sad. 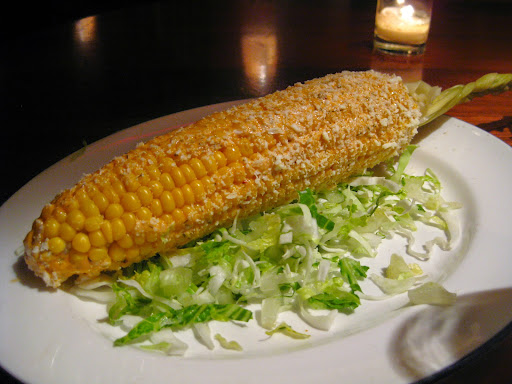 Because I like vegetables – yes, I still consider corn a vegetable even though it’s pretty much pure sugar – I also ordered the Mexico City Street Corn. So much promise; but when it came, well, let’s just say corn on the cob isn’t a good date food.

(Though I remarked this, and my “date” countered that he disagreed because then you can figure out how much you like your date when you see their face covered in corn and think how cute she looks. Or something. I responded by asking how much that meant he liked me, and he declined to comment. Weirdo.)

Not only was it hard to eat in polite company, though, the corn wasn’t grilled; it was markedly overcooked, making it mushy and soggy, and just a bit sad. There wasn’t nearly enough lime or chili on it, either; overall, a huge fail. 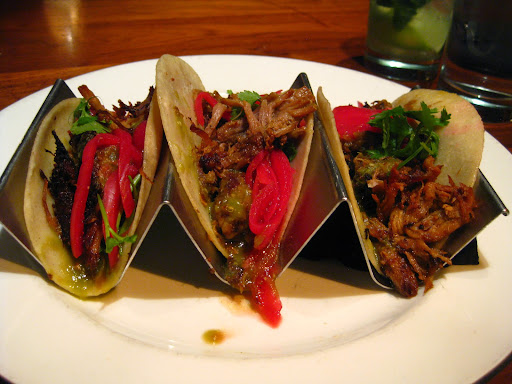 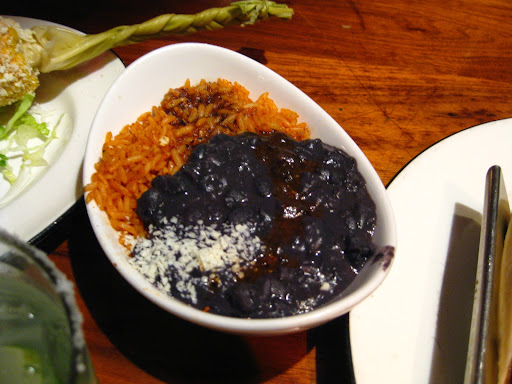 We also ordered a platter of carnitas tacos to share. The menu states that it comes with a trio of salsas, but no salsa was forthcoming. I didn’t fuss. My “date” said that these were better than he expected – a statement with which I agree. The carnitas was juicy and flavorful, and the pickled onions were surprisingly spicy – I enjoyed my taco, though would I return for more? Not really likely; the wait was a bit ridiculous for a Monday evening, and the drink prices are outrageous. The meal itself wasn’t too ridiculously priced, but mostly because we shared everything and didn’t overorder (this was actually enough food, though normally I’d probably have ordered more stuff to try).

Overall, the service was pleasant enough and the atmosphere was fitting for such a place – loud, good for groups, and a bit of a scene at the bar. It suits its purpose and fills that need just fine. Just not likely that I personally will return.

*I don’t actually pretend to be nice and accommodating on dates. That defeats the purpose of dates; better someone knows how demanding I am about food upfront than find out later and be like, you tricked me! So I was half kidding. I just didn’t feel like making a fuss when we were trying to find a place to eat on the fly.