With the backlog of places I’ve yet to review, it may seem strange that so soon after I ate at Betony I’m writing about it. I so thoroughly enjoyed my meal, however, that I felt it important to share with y’all the experience sooner than later. 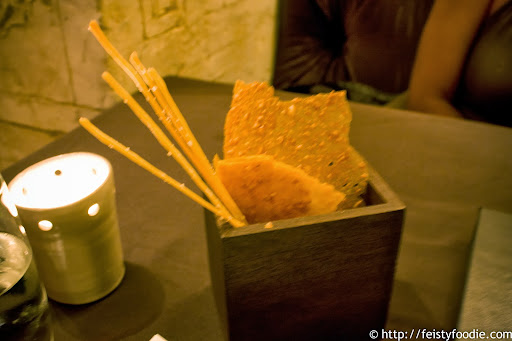 ST planned a visit and smartly snagged reservations ahead of time. Though I find the location a bit odd – in the middle of what I call retail heaven (or hell, depending on who you are) on 57th Street – once you enter the gorgeous, plush space, you forget that you’re in midtown. We were given crisps and the most delicate, delicious little salty breadsticks to nibble on while we browsed the menu. 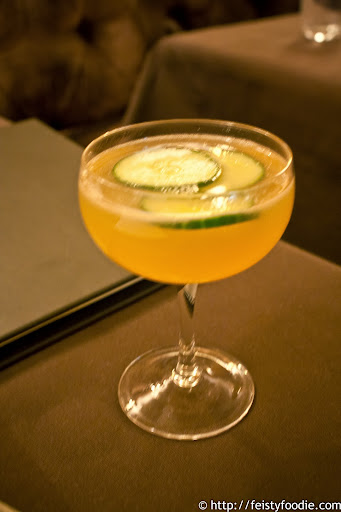 I chose the Ellison – gin, mint, cucumber, lime, Angostura bitters (and chose Bombay Sapphire when the server informed me they use Hendricks) – which was a fabulously well-balanced cocktail. Not sweet and not too tart, just right – and a little too easy to drink… let’s just say more than one of these found its way into my tummy that night!

*sorry for the blurry photos, I haven’t been using my dSLR so I seem to have forgotten how to hold a camera steady… 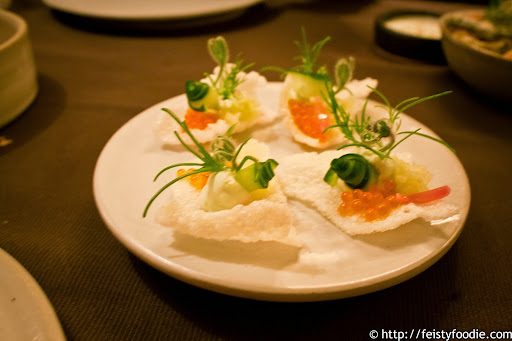 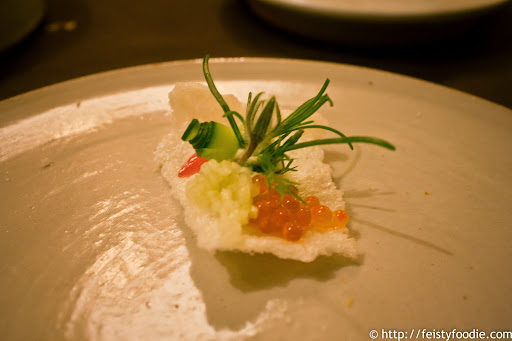 So pretty – and light. The little salty balls popped happily in my mouth and worked nicely against the crunch of the rice crackers. 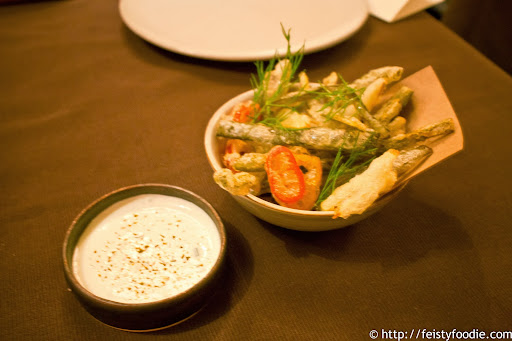 Because I can’t see “fried pickles” on a menu and not order it, I had to order the fried pickles. I was pleasantly surprised – I honestly thought this could be a disaster – but the pickled peppers that arrived had been fried nicely in a tempura-style batter. Were they phenomenal? No. The fried pickles I dream of and long for? Nah, not by a long shot. But they were tasty, slightly tart, a very slight kick, with the yogurt dipping sauce alongside cooling it down nicely. Just not something I’d order again. 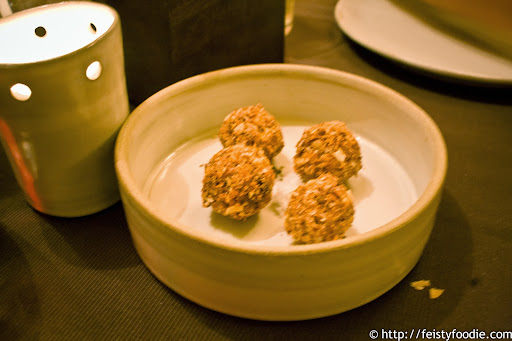 The last of our bites – but certainly not the least, not by a long shot – were the foie gras bon bons with cashew and black pepper. How do I describe these without sounding like I’m in love? Rich, creamy, fatty, savory… They were perfect little bites of heaven. I fell immediately for the little balls, melting gently in my mouth; the crunch of the cashew played so nicely with the foie gras, with a slight poke of pepper… just incredible.

And this would make the 3rd of the bites I’ve publicly stated I want at my reception. (First: foie gras macarons from Eleven Madison Park; second: oyster, pork belly, kimchi from Benu; third: these.) 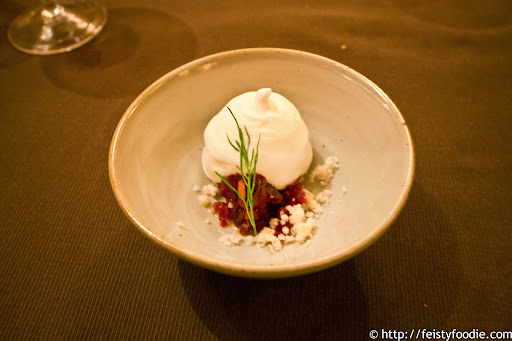 A palate cleanser came next: roasted beets, horseradish, and goat crème fraiche. I wouldn’t have thought horseradish would work so well with roasted beets, but the pungent root offset the sweetness of the beets expertly, creating a very pleasant balance in my mouth. 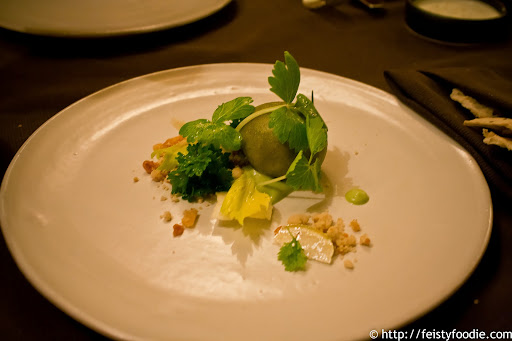 For our middle course or appetizer, we chose the chicken liver with apple and celery. The little green ball was chicken liver, wrapped in what I felt was slightly chewy, almost savory taffy like. I was surprised again here: I tend to dislike chicken liver, as it can be very metallic and a bit too offaly for me. But this was perfectly smooth, clean tasting and just right. 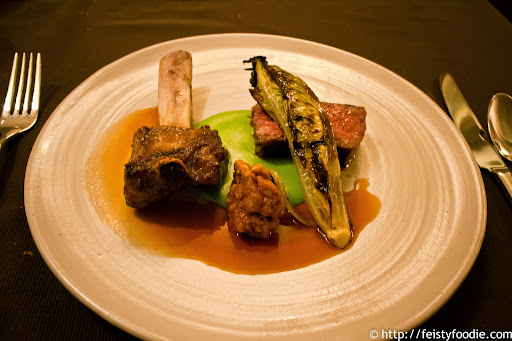 For our final savory course, we chose from the entrée section: grilled short rib with romaine and sweetbreads. We’d intended to split it between us, but two separate plates arrived and our server informed us that it was “compliments of the kitchen” – thank you! I’m not sure what we did to deserve that, but it was a good thing, too, as the piece of short rib on the right side of the plate, peeking out from underneath that romaine? holy wow, that was the most tender piece of meat I’ve eaten in a long time. So soft, so succulent, so perfectly cooked and seasoned that my mouth is watering right now just thinking about it. AMAZING. I was supremely glad I didn’t have to share it with ST – I think she was thinking the same thing.

I have a special fondness for sweetbreads, and these were excellent – not a trace of chalkiness, perfectly cooked, but honestly were just overshadowed by the meat items on the plate. The piece of meat on the bone – and this is where one of my very few complaints of the night come in – was also perfectly cooked, grilled to perfection in such a way that the highlight of the flavor was “meat” itself – the maillard reaction, if you will – just this heady taste of MEAT. As for my complaint: why were we not given sharper knives with which to cut the meat from the bone? I struggled with my piece, and a teeny part of me wanted to pick it up and gnaw straight on the bone, but my princess self laughed at the thought. As it was, I just struggled to cut what little off the bone that I could using the rounded knife I’d been given, and enjoyed what I could eat. For shame, the amount of meat I left behind… for shame! 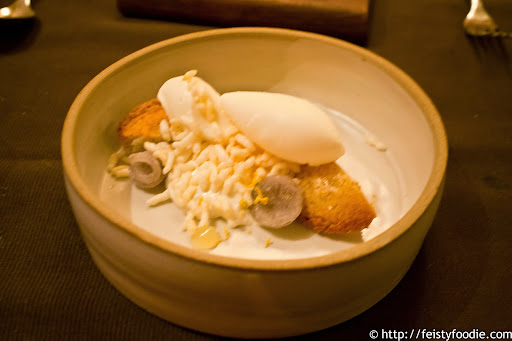 Not being much of a dessert person, I opted to simply have a little of ST’s dessert – rice pudding with lavender and meyer lemon. I’d actually never had rice pudding – and this was no ordinary rice pudding. A pudding of sorts topped with puffed rice, the textures were all there… with bits of lavender mochi on the side that were lovely (I LOVE MOCHI). I thought it was an interesting dessert, well-executed, and ST certainly seemed to enjoy it. 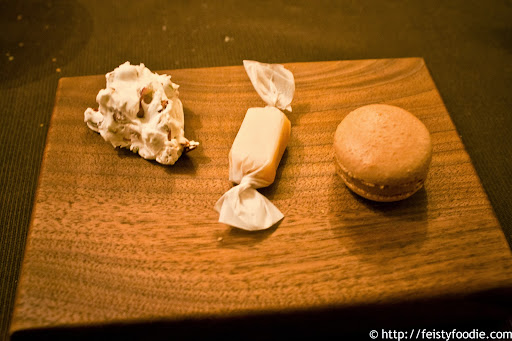 I did, however, opt for their “last bites” choice on the dessert menu, which is composed of three small bites. Frozen chocolate stout macaron; pink peppercorn caramel chew; dried cherry and pistachio divinity.

The macaron was interesting – a lot of the bitterness of the beer coming through; the caramel tasted much like a very unsweetened taffy, almost; but the surprise for me was the divinity. Very slightly sweet, chewy with all the right notes and a bit of crunch, just perfect – I would like a whole box of these to go, please.

Overall, the entire evening was incredibly tasty, with phenomenal service. I definitely felt a rock star – even more so when as we were leaving, our server brought over – unprompted – a copy of the menu that had been signed by Chef Bryce Shuman. I’m still not sure what we did to deserve the kitchen’s attention, but *shrug* the food was good, and that’s what I care about.

I highly recommend making a point to visit Betony as soon as you can for truly delicious food and incredible service.