This is the story of how I wound up at Story Deli in London on a day determined to prove just how finicky English weather can be – storming heavily one minute, the sun blasting through the next.

Months and months ago, I was approached to be NYC’s Chief Chowzter. Silly name aside, after discussing what, exactly, this entailed, I signed up with the start-up and began plotting what dishes in NYC deserve the title of Tastiest Fast Feasts. (If you click over, you can see that my own personal list hasn’t been uploaded yet, as I am agonizing over where to include and what not to… AGONY.) This has been a whirlwind of emails, flurries of communication as Chief Chowzters all over the world were also tasked with nominating local bites to win awards for “BEST IN THE WORLD” – with the winners being announced at the inaugural 2013 Chowzter Awards in London in late April.

Unfortunately, not a single one of my nominations won *sobs* but I’m not to be discouraged! I know it’s just a matter of time before the judges who voted sample my choices again and realize just how infallible my palate is, because we all know that taste is totally objective! (I’m being silly, of course. Taste is completely subjective and variety, difference of opinion is what makes my world spin!)

HOWEVER: Chowzter graciously invited me to join them in London for the awards ceremony, thus my blink-of-an-eye trip across the pond, and… though it wasn’t my nomination… I was asked to accept the award for World’s Best Burger on behalf of Louis’ Lunch in New Haven, CT.

And none other than Pierre Koffman presented the award to me, which I graciously accepted and then cheesed it up for the cameras.  I will soon be making the sojourn to New Haven, CT (stopping for pizza along the way!), to hand over the gorgeous little award to the restaurant – and you can be sure I’ll be blogging about that as well!

But before the awards… almost as soon as I landed, really… I met up with a bunch of the other Chief Chowzters who’d made it over to London for the awards and we nerdily bonded over eating lots and lots and lots of food. The only stop I documented turned out to be the only one that mattered:

Story Deli, where we met the lovely eccentric owner Lee, who described how he came to make “pizzas” using only organic ingredients. Every single item is organic, down to the flour… but here’s where we hit a snag.

He could not find proper organic yeast.

So he did what any normal person would do.

He forewent the yeast, thus producing a pizza whose crust is undeniable in its unique texture: crisp, almost as thin as paper, and somehow still managing to hold its toppings.

I’ll let the photos speak for themselves. 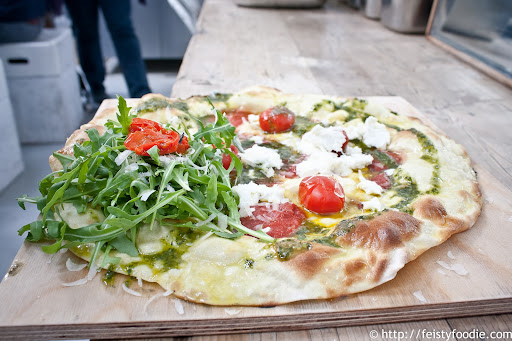 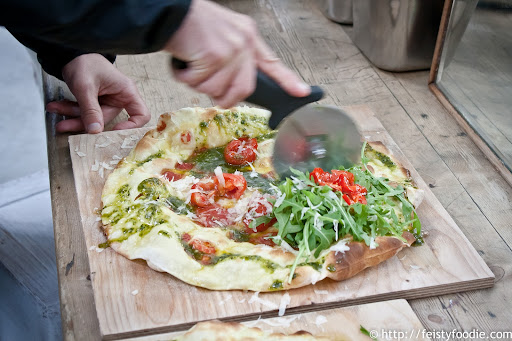 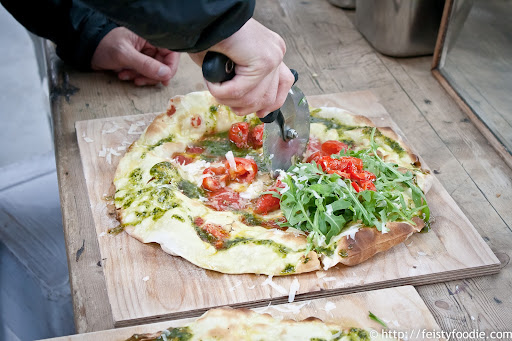 The margherita being cut – I’m not entirely sure who we enlisted to cut the pizzas… it was one of the male bloggers who said something about being Italian so it’s in his blood? Hehehe. 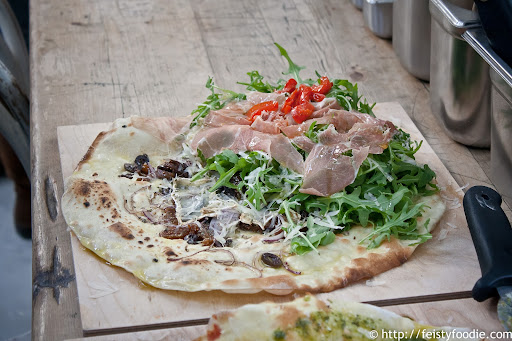 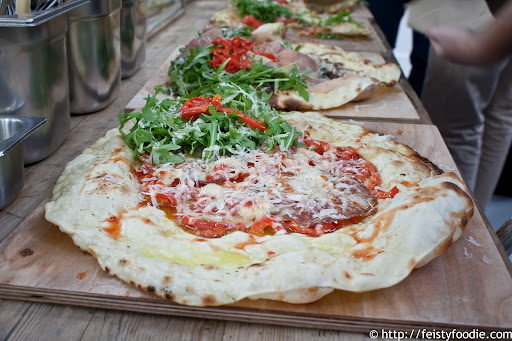 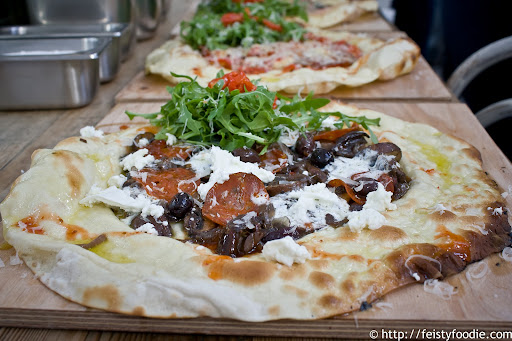 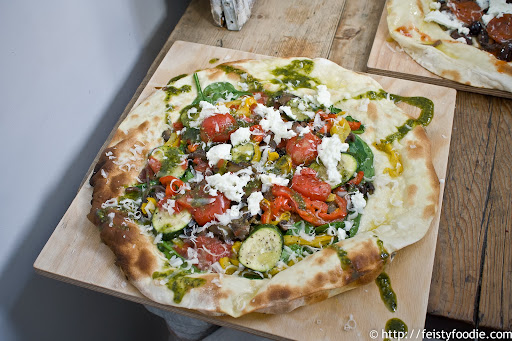 By special request, for the vegetarians among us, a pie topped with various roasted vegetables. 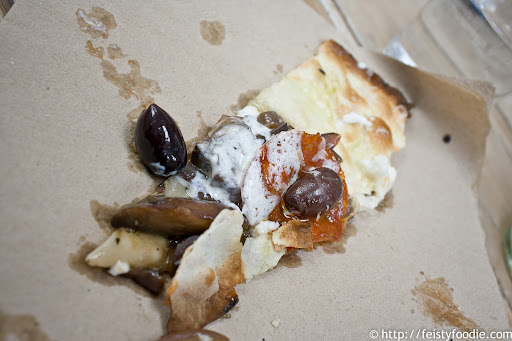 A slice of the chorizo & mushroom pie – the delicately crisp crust held up the toppings surprisingly well, and the toppings together all worked nicely. 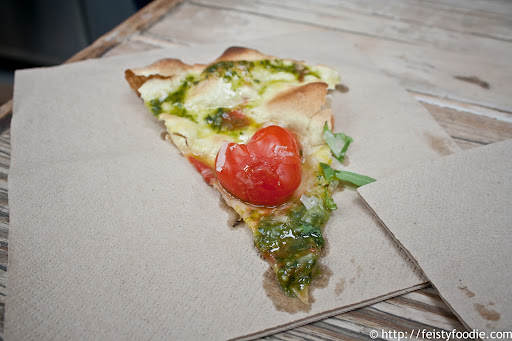 A slice of the margherita… 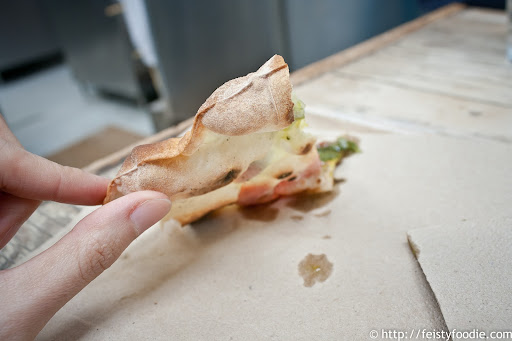 … and the requisite upskirt.  Though that tomato looks relatively raw/fresh, it was thoroughly roasted and bursting with natural sweetness. Honestly, I was a skeptic about the crust – look how thin and airy it is! – but the final word, the only thing that matters, the taste itself? Well, it was fantastic. Delicious, despite – or perhaps because of – its not-really-pizza nature. 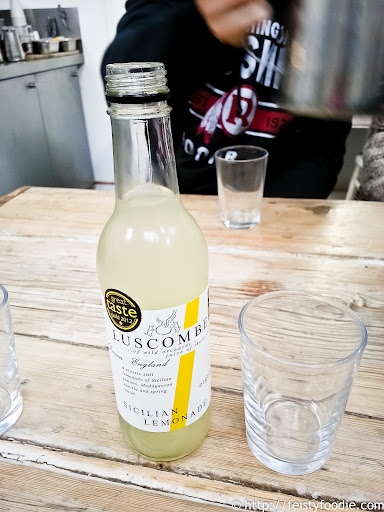 Even the lemonade was organic (and quite lovely – tart and delicious!).

The verdict? I thoroughly enjoyed what I ate; crisp, airy, not too heavy where after a few slices, I felt sick from overeating; delicious and great.

However… as a stickler for certain things… this isn’t pizza. Is it tasty? Yes. Is it good? Yes. Should you eat it? YES!

But it’s still not pizza. There’s thin crust, then there’s simply crackers and flatbread topped with yummy ingredients. This is the latter, I’m afraid to say.

That doesn’t detract from how delicious it was!

Nor did it stop Story Deli from taking home the prize for Tastiest Fast Feast in the World, 2013.

That’s right – they won for best fast feast overall, over all other nominees in every single category.

And this New York pizza snob?

Well, I’m not mad about that at all. I think they truly deserved a prize – innovative, creative, completely different pizza. And variety makes the world go ’round, y’know?

If you’re in London or planning a visit to there, you should definitely give Story Deli a try.

And say hi to Lee while you’re there. If you’re lucky, he’ll tell you the story of how Story Deli got its name.