…sigh. I wrote out this whole post and then pressed “save draft” and WordPress ATE MY POST. So I’m going to try to recreate it… but we shall see. :T

For my first trip to SF in 2013, I did a lot of wandering around and ate many things that don’t really need their own post. I know how much y’all love my “what I’ve been eating posts” so here’s another one – SF-style!

Funny enough – I mentioned in my last such SF post that I went to Dynamo Donuts, but they were out of the sea salt caramel donuts so I got two maple bacon apple donuts instead. Well, I took a walk along the Marina with Dr. PB and we stumbled on this kiosk that said… Dynamo Donuts! I took it as a sign that I had to try the sea salt caramel donut, since I’d no plans to go to the store, and the kiosk had plenty in the display. Verdict? the sea salt caramel itself was lovely – smokey, with the salt balancing the sugar nicely, and gooey, thick, perfect. However, the donut itself was just no good – it wasn’t cakey like a cake donut, but it wasn’t chewy like a yeast donut either. I love chewy donuts so you can say it’s my own personal taste bias here, but the donut was just bleh, a carrier for delicious caramel topping but nothing on its own. I’ll pass – I have found a favorite donut in SF already (you’ll see, in this post!). 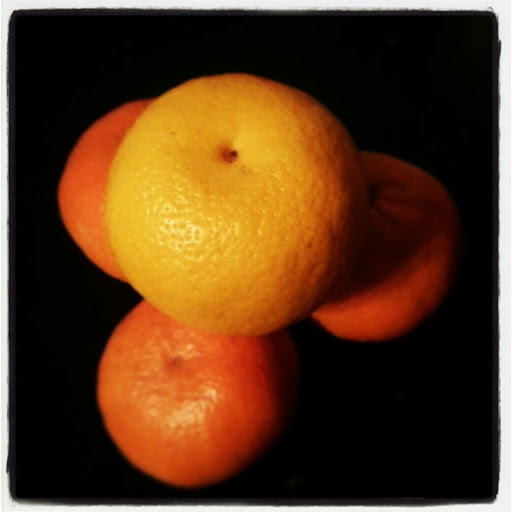 Wednesday morning found me at the Civic Center Farmer’s Market (Heart of the City, I believe it’s called) with SFG. He introduced me to “the good citrus lady” as he calls her, and I bought a couple of Mandarins and a honey tangelo – the yellow fruit on top – which was incredible. Because of perception, you expect it to be sour or bitter like a lemon or grapefruit, but instead it’s just lovely sweetness. I got these for snacking while watching TV or for something to eat before I left in the mornings, lest my blood sugar dip and I turn into angry I DON’T LIKE BEING HUNGRY Yvo.

On Thursday morning – coincidentally, Valentine’s Day – I joined SFG and went to the Marin Farmer’s Market, which was really nice – not crowded (well, it was like 8 or 9am), lots of great produce,… and a real learning experience watching him pick up more produce than I could even imagine buying. While he did that, I wandered around and stumbled on this cute sign – “Pork is for lovers” at Prathers, and then stood near the Roli Roti stand and just inhaled. Unfortunately, the Marin Market Roli Roti stand does not offer sandwiches – just chicken and potatoes – so I just inhaled the glorious scent until we left.

SFG knows the way to my heart though – and needed some more stuff – so we dropped by the Ferry Building Farmer’s Market and picked up sandwiches. I happily gobbled my half and was sated for the rest of the day… ha, no, I still ate other things.

Like THIS. While at the Ferry Building Farmer’s Market, I stopped by this little table set up outside the seafood purveyor that’s inside… this nice woman sells these cannoli donuts that are INCREDIBLE. I like the lemon cream more than the chocolate one, but the exterior is super chewy, while the inside lemon cream is light, delicious, yummy. They’re not cheap – I think it’s $3.50 for one – but they are so, so good. I just love how chewy the outside is… omg so good.

Sorry – I took a bite of the canele before I remembered to snap a photo. Still Valentine’s Day – on my way back from a haircut (yes, I found a new stylist and he’s in SF… but I love him! and I found out on this trip that he’s kind of famous! wuttt), I stopped by Tartine Bakery for some goodies… There’s always a line, even the middle of the day. But it moves fast in the middle of the day… I saw they had caneles, and picked up a whiskey cookie and an almond lemon tea cake. The canele was good but definitely not the best I’ve had by a long shot (I’m pretty picky about canele)… the cookie was chewy deliciousness (I had one last time as well)… but the lemon almond tea cake is just my absolute fave. A crisp crust, moist, dense crumb, and the whole thing infused with the brightness of lemon… I LOVE THIS CAKE. I finally found the recipe online (I had the name wrong the last time I tried looking), so I am going to attempt this at home soon I think. Soon… LOVE. 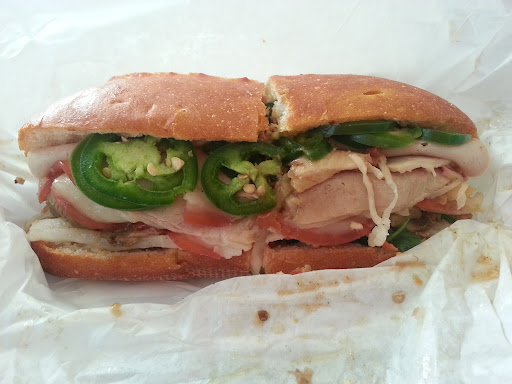 I also finally tried the banh mi from Duc Loi, the Vietnamese supermarket local to where I stayed. While the sandwich was stuffed to the brim with meats and everything, it was only okay. I mean, for $5 and change, it fills you up, but it’s by no means a well-crafted, balanced banh mi the way I like. The bread was OK, the meats were OK, it needed more pickled veggies… overall, it was OK. 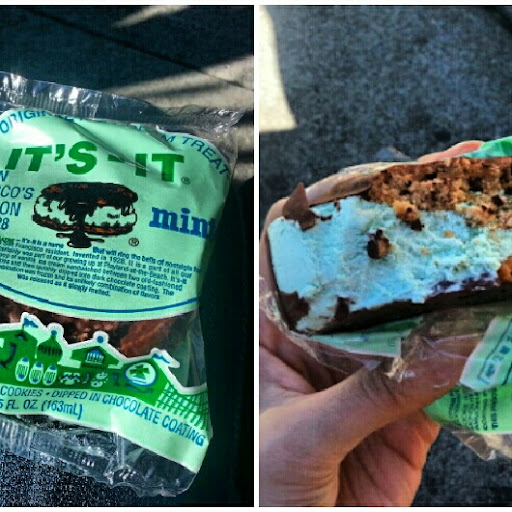 And on Friday, after a meeting I had, I was generously told to help myself when I noted there were IT’S ITS in their fridge. I’ve heard so much about these things! I’ve wanted one for so long! I was… confused. I don’t get it. It’s a melty ice cream sandwich with crumbly oatmeal cookies and mediocre ice cream inside. I mean, it was fine as it is, but it’s not life changing or earth shattering, and I probably wouldn’t get one again (maybe a different flavor?). I didn’t like the crumbly oatmeal cookie mostly… It didn’t work for me. 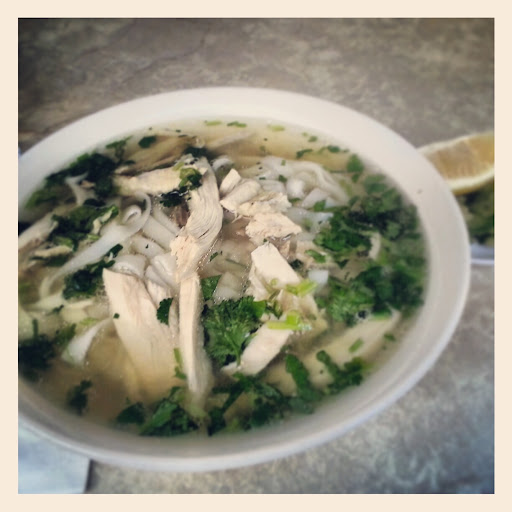 Then, because I could, I wandered by Turtle Tower and had a delicious bowl of chicken pho. My favorite bowl of pho in the world, I think. Delicious as always – sweet, clear broth… delicious noodles… just happiness in a bowl. Sigh. 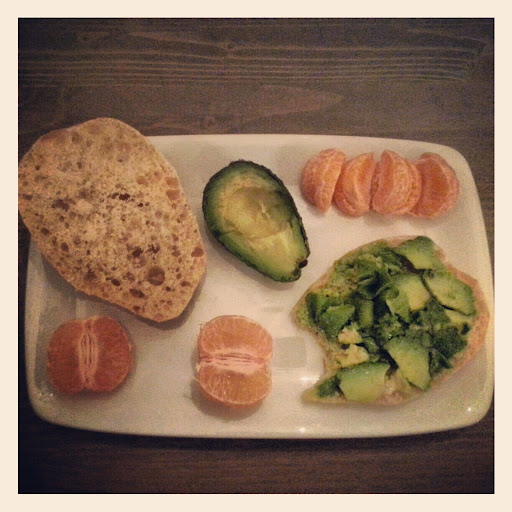 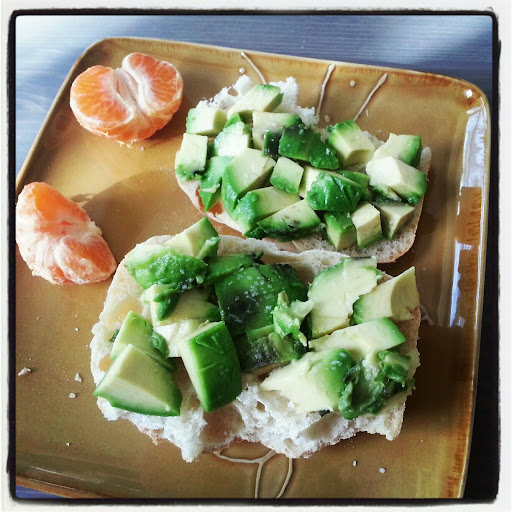 Because I am SUCH a Cali girl – ha! – I made myself avocado ‘toast’ a couple of times, too. At the Marin Farmer’s Market, I’d picked up a couple of avocados and some ciabatta. I didn’t toast the bread because the ciabatta was really tasty as is (I think she’s the only bread purveyor that was there… I forgot the name, sorry!), and I didn’t add anything to the avocado except some salt – no cilantro, no lime or lemon juice, just salt. Creamy avocado goodness on that bread, perfection! And Mandarins or my tangelo on the side. Delicious!

I just really like this picture: McDonald’s, reflected in the window at Saison. 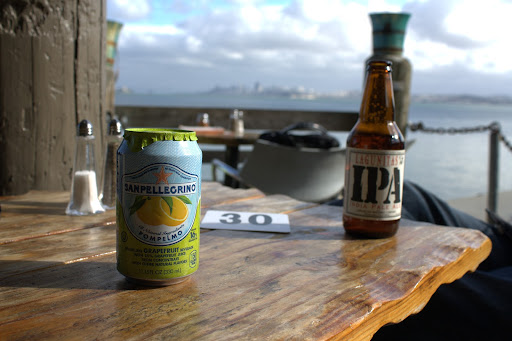 On my last full day there – one of SFG’s days off – we drove up to Sausalito and just walked around, enjoying the gorgeous sunny weather. We stopped for a sandwich (which was forgettable and I won’t be posting about it), and my favorite soda for me (San Pellegrino pompelmo or grapefruit), a beer for him. It was so nice out.

For the plane ride back, I stopped at Boccalone in the morning to pick up some meats and asked the cashier if there was a sandwich that traveled well. She immediately told me this one – I think it’s the first one on the menu – because it doesn’t have anything that spoils, it’s just cured meats and a roasted or sundried tomato spread on it. It was pretty good, too – lots of flavor to it. I wound up not eating it on the plane – you’ll see why – but it was great the next day for lunch at work anyway.

Just some of the yummy things I ate while in SF this first trip of 2013 to the Bay Area… it gets harder to say goodbye every time I leave.