After my Mexican breakfast, I hustled back home to finish packing for a week in SF. Due to some interesting issues with my ID at the time, I headed to JFK early to avoid missing my flight from those complications… but instead wound up with an extra hour to kill before my flight. So I wandered into Tigin for a drink to calm my nerves before the flight – I am not always a good flyer – but an item on the menu caught my eye.

Normally, I wouldn’t really bother writing about airport food – particularly at JFK, as I travel out of there frequently – unless I was traveling internationally. However, I so thoroughly enjoyed what I ate, that I wanted to share.

I started with an Irish coffee, which I’d thought was coffee with Bailey’s, but I was wrong. It was coffee with a lot of whiskey. Good start to get me nice n toasty before a fairly troublesome flight for me.

Homemade shepherd’s pie topped with colcannon (mashed potatoes mixed with veggies)… hello. I’ve been making this for around 10 years, but something of my own making, and have only ever had shepherd’s pie not-mine once, and that was from Boston Market in 1997. So I finally caved and ordered it, despite knowing I had a very long night ahead of me, with a lot more eating to come… and I could not be happier that I decided to pig out. The mixture underneath the awesome colcannon was rich, heady, savory gravy that was thick and redolent with meat essence. The colcannon itself was crisped on top, with a creamy texture, flecked with bits of greens, and just incredible. The entire dish made me so happy that despite being super full halfway in, I powered through and 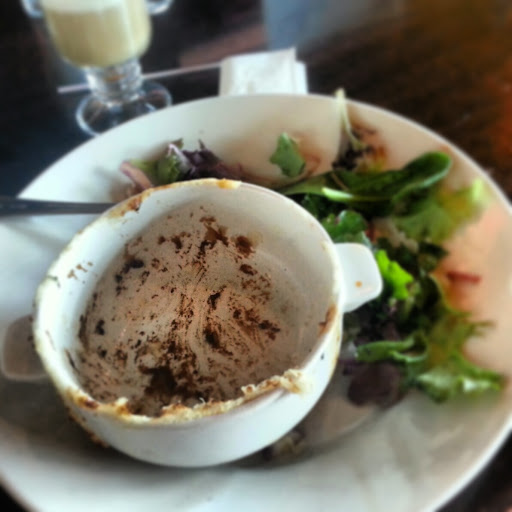 joined the clean plate club because I was so happy with my choice. So good!

Thankfully, though the location I went to is in Terminal 4 of JFK Airport past security, there are other locations mostly in other parts of the country. Check it out – maybe there’s one in your area, and maybe they serve stiff drinks along with delicious food just like this one.