Since the first time we’d gone to Parm I was unable to eat much (or anything at all) – and the menu was abbreviated as it was between lunch and dinner service – TC and I talked about going back. Finally, one Friday afternoon, we managed to get there during regular service and took a seat in the back. Love the cute sign! 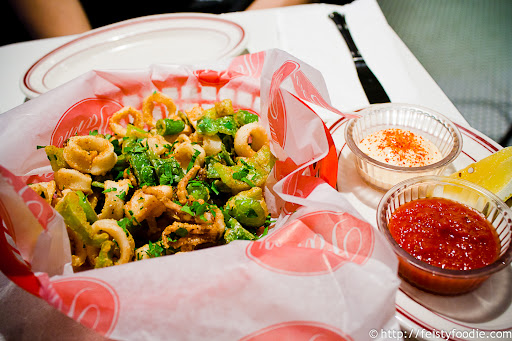 We decided to order the calamari, which arrived with some green bell peppers and some spicy peppers (I luckily managed to not absentmindedly pop a piece in my mouth). This was good but definitely nowhere near the most amazing calamari I’ve ever had. I wouldn’t order it again, for sure, even though I liked the aioli served with it (and the marinara; I alternated). TC and I both commented how few tentacles there are; I don’t prefer them but I do like having a good scattering so I can munch on the slightly chewier pieces sometimes. Plus they hold more sauce.

Never doubt why I eat with TC: it’s because he shares, and he’s all too happy to eat the lion’s share of food at my request (though strangely, on this day, I managed to end up with the bigger half of both sandwiches, darn).  He ordered the chicken parm again – it was so good last time. I admitted I’d never actually had a chicken parm hero previously, and my friends were up in arms… Unfortunately, somehow the parm wasn’t as good as it was last time. Not to say it was bad, but the cutlet was softer, lacking that crisp exterior of a fried chicken cutlet that I love. The sandwich was a messy affair – as I imagine all chicken parm heroes are – but I was most disappointed that the parm wasn’t as outstanding as I remembered. TC agreed, saying that it was definitely better the last time. 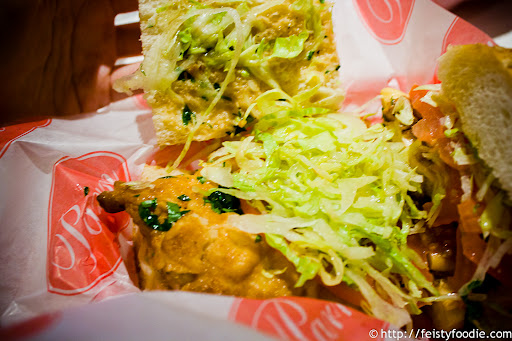 Since we were splitting two sandwiches, I opted for the chicken francese hero (I LOVE chicken francese; if you look for THAT on my site, it’s everywhere; I love that lemony tang!). I was surprised that it came with lettuce and tomato – I would have been fine with just the chicken and extra sauce. Unfortunately, this sauce lacked that lemony tang I love and fell pretty flat. It was made worse by the excess lettuce, which further muted the flavor of the sauce. Meh. 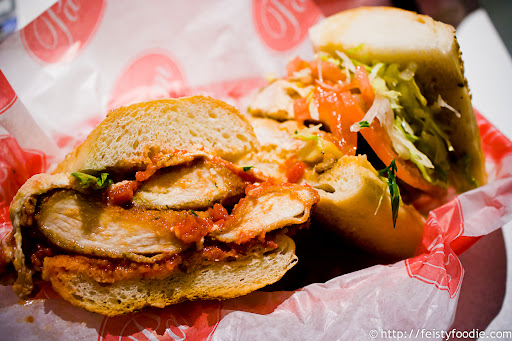 Cross sections shots of each. I still don’t know how I managed to eat all of that! (I think I might have left the tiniest bit of bread at the end… but I ate almost all of it!) 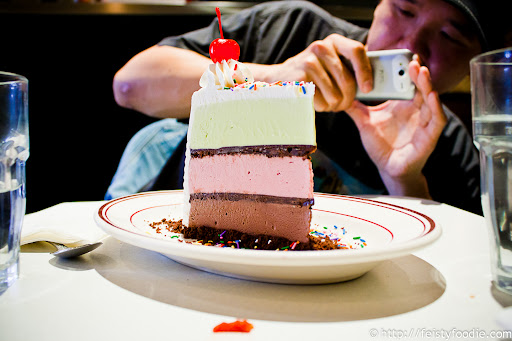 Then it was time for dessert! Even though I’m pretty sure we went to Dominique Ansel afterwards… In any case, TC wanted ice cream cake and ice creak cake he had! Unfortunately, I found the flavors – pistachio, strawberry and chocolate – to be really artificial, particularly the pistachio which tasted chemical-y, and the strawberry was barely better. Chocolate at least was OK but everyone knows not to stand between TC and chocolate. I took a few bites before realizing I really didn’t like it enough to justify continuing eating, egh.

Sadly, it seemed like our return visit was full of disappointment and failure. I don’t know that I’ll go out of my way to revisit – though Hungry wants to go – as this was soundly mediocre, and not exactly cheap to boot.  We’ll see.