The Ides of March means a lot more to my family than the death of Caesar, it means it’s almost my Dad’s birthday. This year was quite the milestone as my Dad turned the big 7-0. With such an important birthday, Aunt B called me and said the two of us should plan something special. Taking a cue from what I planned for CT’s birthday back in January, I checked out if anything was going on at the James Beard House that night. On his actual birthday, the dinner was a Feast of St. Joseph featuring a lot of different seafood. It was perfect. My Dad loves seafood almost as much as CT loves pork. Kind of crazy that James Beard was hosting events right up their respective alley’s on their birthdays. Fortunately, we got pretty much my whole family to go. All seven of us including CT.

The Chef that night was Chance Bear of Francesca’s Cucina in Syracuse, NY.

Since it happened to be the warm week on the calendar, the cocktail hour was held outside in the backyard of the house to take advantage of the weather. The week after it went back to below freezing at night. 2012 has been such a crazy year weather-wise!

There were four different hors d’oeuvres passed around.

Tomato Crostini with Tomato Jam and Roasted Garlic–Onion Spherification. The tomato was the most interesting part of this little bite since it was similar to a fruit roll up. It had a nice, intense tomato flavor. Although the roasted garlic and onion was not very sphere-like, it did pack quite a punch of intense garlic flavor. 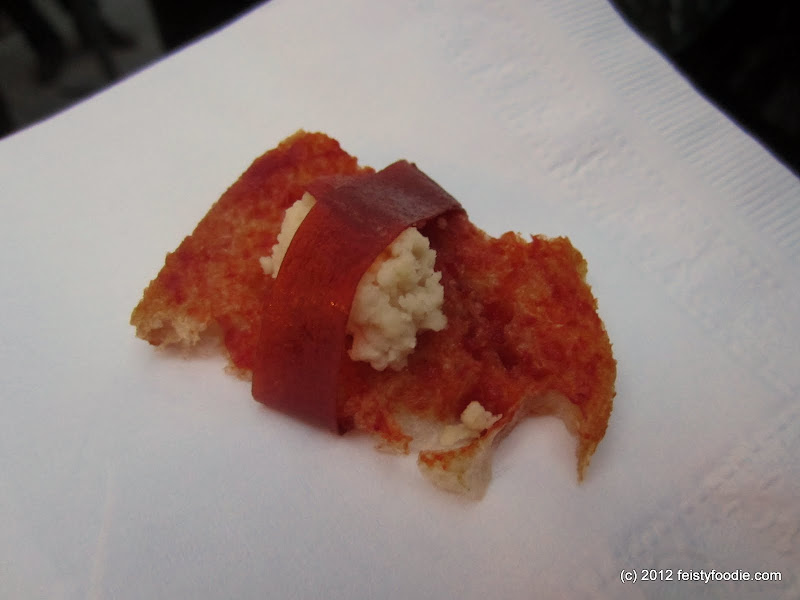 Shrimp and Clam Ceviche with Blood Oranges and Candied Limes on Grilled Toasts. I think the Chef had issue with the toasts because the ceviche ended up being served on top of a plastic cone filled with breadcrumbs. Most people did not think what was in the cone was edible since the spoon sat on top until the servers explained that it was. The ceviche was bright and fresh with plenty of acid from the citrus. I had a little taste of the breadcrumbs. They were not good. Somewhat mushy and bland. Sometimes you have to think on the fly when a dish doesn’t come out as expected and adjust as the Chef did, but it doesn’t always mean it will be successful. 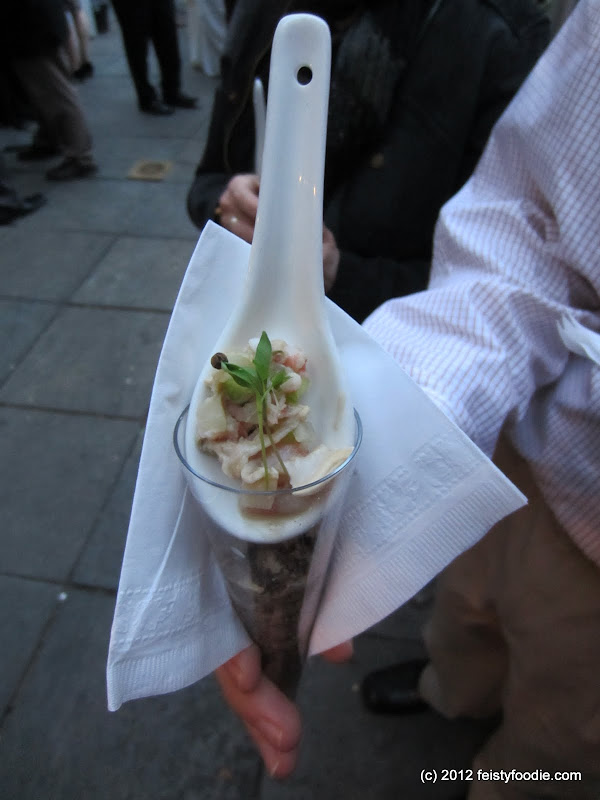 They had two different cocktails for us to enjoy with the little bites. They were each very unique, but I think the wrong kind of drinks for the crowd. A sparkling wine would have been better.

A very green Saffron-Basil Martini. I only had a sip as it was quite strong and very herby. 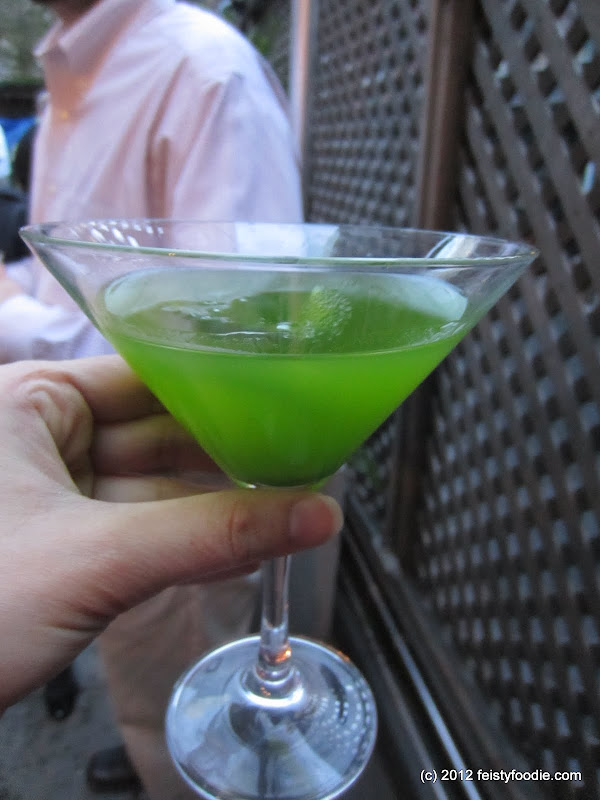 Francesca’s Spumoni Cocktail. I am pretty sure this one was just vanilla vodka on the rocks. 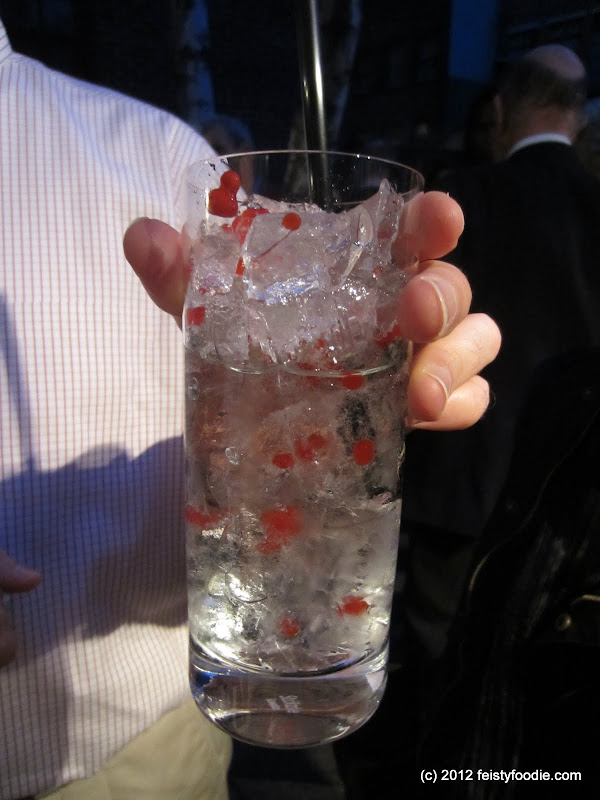 Buffalo Mozzarella Stuffed Ricotta and Fontina Arancini with Braised Grape Tomatoes. I can never say no to some arancini. It was a nice bite; crispy on the outside and creamy on the inside. The braised tomatoes were a nice tangy yet sweet contrast. 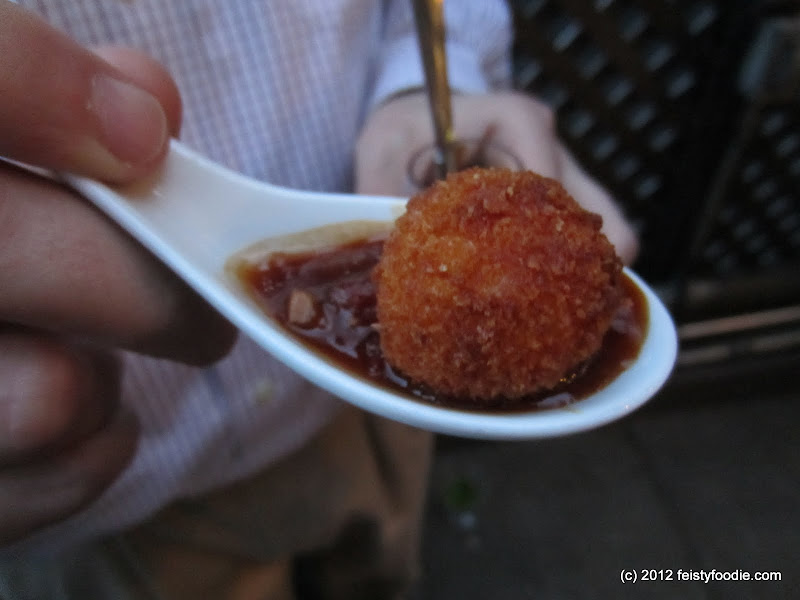 Pan-Seared Old World Gnocchi with Chianti–Leek Marmalade. As mentioned in the past, I find gnocchi to be very difficult to execute whether it is for one person’s order or as a passed hors d’oeuvres. These gnocchi were a little firm, but not too leaden considering the presentation. The marmalade was sweet from the wine and leeks, but not overly so. 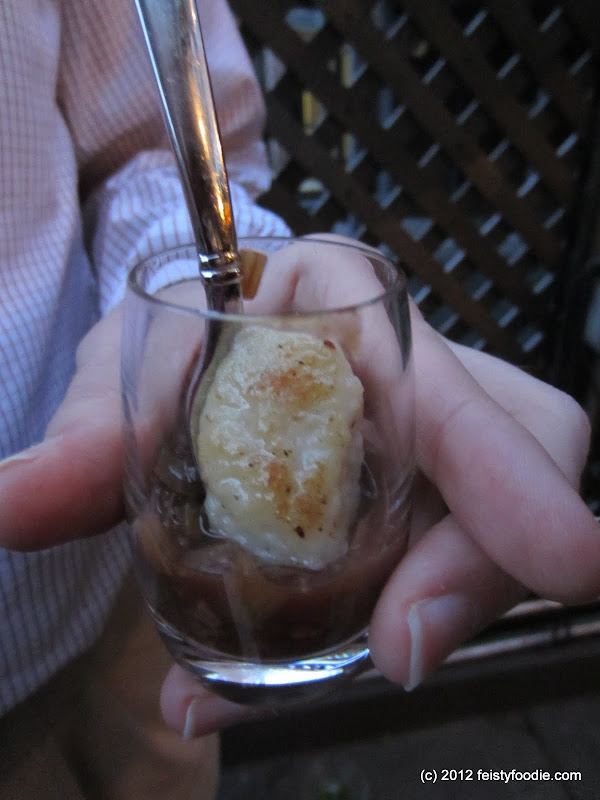 Once we were seated, we found some questionably shaped fresh baked bread. Turns out it was a fish hook to signify our seafood dinner. However, from a different angle it looked highly inappropriately shaped, haha. 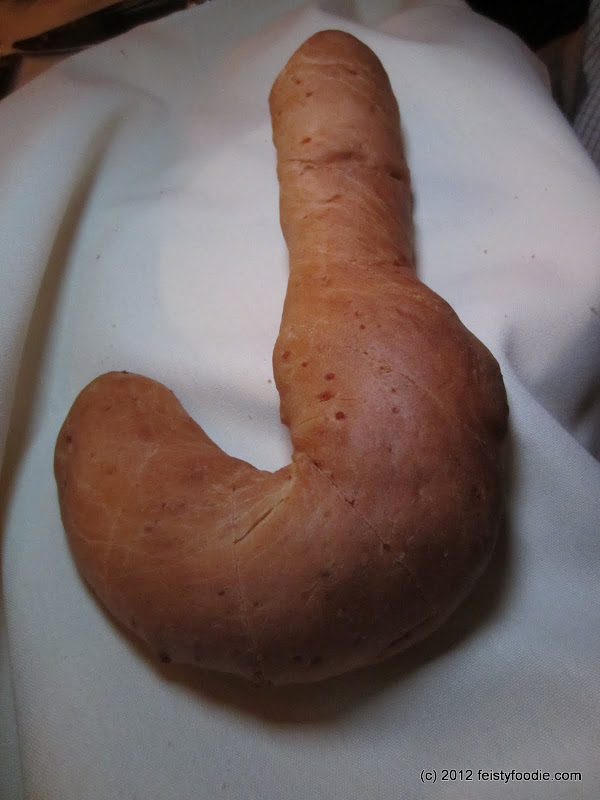 Harvest Minestrone with Local Vegetables and Garlic–Cannellini Bean Broth. This very light soup was an excellent start to the meal. It was given a little more heft once we decided we should put the vegetables on the left into the soup and eat all together. Roasted Garlic Marinated and Hickory-Grilled Swordfish with Lime–Ginger Crème Fraîche, Pickled Micro-Beets, and Bull’s Blood Salad. This was first presented with a little bowl on top because the Chefs actually “injected” some hickory smoke with a hand-held smoker on top of the fish and covered it. I hardly ever eat swordfish as it tends to be heavy and more susceptible to toxins. However, this preparation was light and fresh but unfortunately a little too small as you can see. The sweet chopped beets added some good texture to the dish. 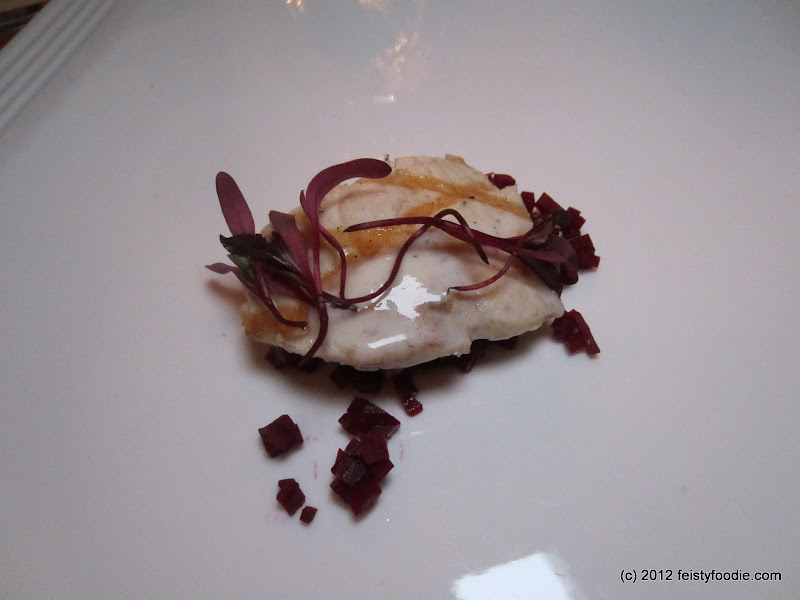 “Pasta Sabbia” Hand-Cut Linguine with Bread Crumbs and Pesto and Basil–Infused Olive Oil. I’m not sure if the Chef was trying to make a play on an Alfredo pasta, but I felt this was pretty meh. The pasta was kind of mushy and sad. 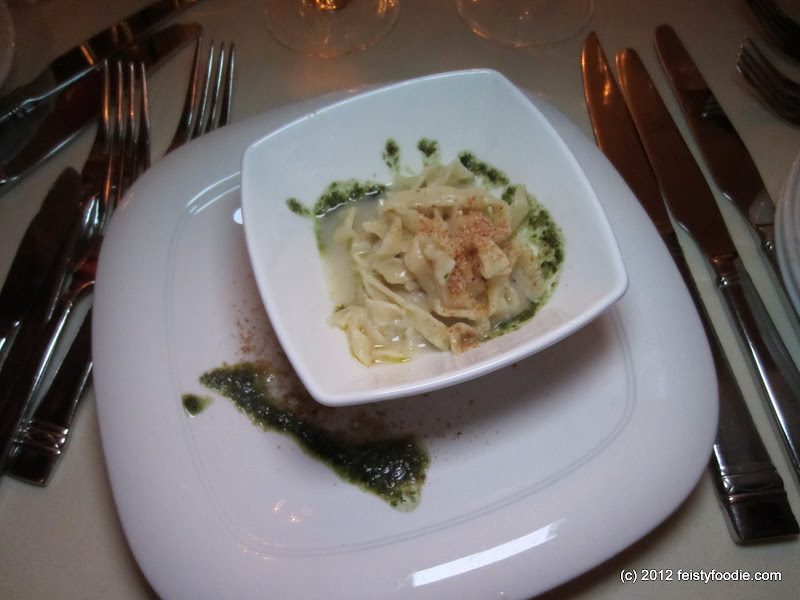 Fava Beans with Charred Calamari and Smoked Heirloom Pomodoro Sauce. When I read this on the menu, I was pretty excited since it was a squid dish. It ended up being one large piece of squid that was pretty chewy(which I didn’t mind), but just ok. The fava beans were pretty al dente though which was not enjoyable. Braised Wild Striped Bass in Parmesan Broth with Soft Polenta, Fried Pecans and Walnuts, and Crispy Fish Chips. This was quite an interesting dish to wrap up our meal. The bass was perfectly cooked. I don’t remember the broth having much of a Parmesan flavor. While pretty standard, the walnuts were good and interesting combination with the fish. The crispy fish chips(you can see one in the bottom left of the picture) were packed full of salty/umami goodness. I could probably eat a whole bag on their own. 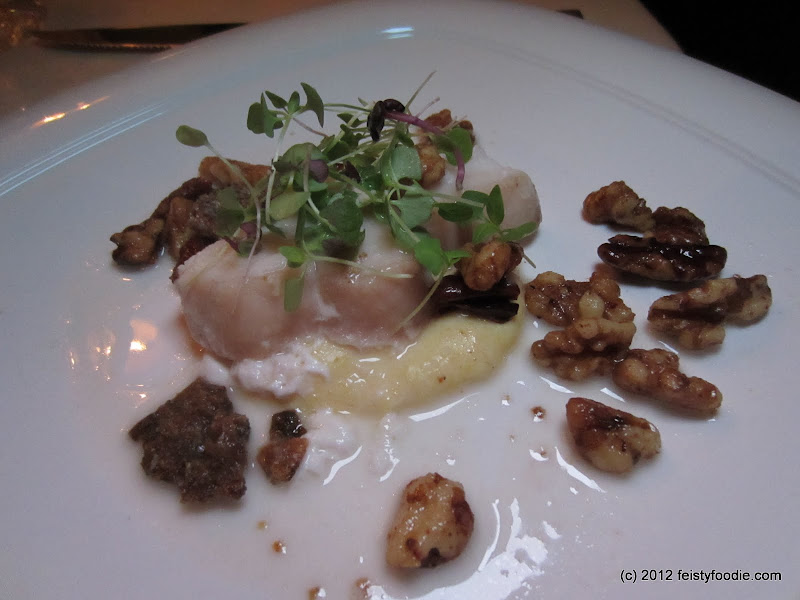 “Zeppole di San Giuseppe” Pistachio and Ricotta Cream–Stuffed Zeppole with Sweet Marsala Sabayon. We ended the evening on a high note with this dessert. After all of the savory dishes, I really appreciated the sweetness of this. I ate the whole zeppole, so that should say a lot since I am not a dessert person. 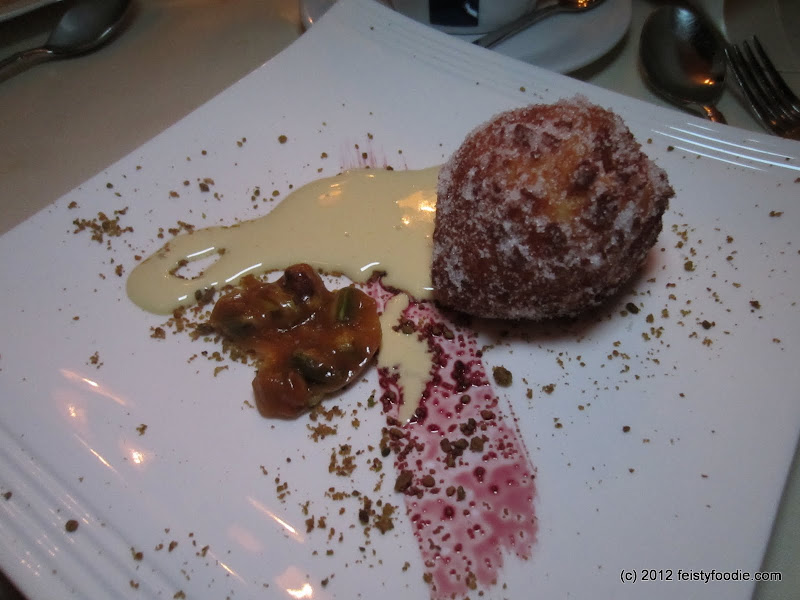 All in all, this time around at James Beard was a little bit of a disappointment especially since the whole family (minus my other sister in Florida) was able to get together to celebrate my Dad’s birthday. It just goes to show that not every dinner that occurs at the James Beard House is a “winner.” Regardless, we all had a good time with the company. Happy Birthday Dad!