I get invitations for all sorts of fun things frequently. It’s part of the benefit of not only maintaining my own blog and having an audience that reads what I write, but also, living in a large city like NYC (okay, the largest in the country, but I’ll stop bragging now). Sometimes I just can’t attend all the events, or they just don’t pertain to the blog in a way that I could feel comfortable attending an event simply for swag… so I decline out of respect for other people who might want to go.

Well, I was recently invited to a Star Wars event, the launch of GUM brand toothbrushes for kids. Though there is hardly a way for me to work this into a post for my site, here I am, doing it. Why? Well, I attended for two reasons: first and foremost, I absolutely adore my nephews, both of whom are HUGE Star Wars fans. Well, they love the video games…as this next anecdote will tell you.

I was watching my nephews in the playroom while my sister made dinner upstairs. I asked my nephews if they’d ever seen Star Wars, and my older nephew, D, responded, “No, not since a long time ago. Mom says they’re too violent so maybe one day when I’m older I can watch it again…” (Apparently, they saw it when they were too young to understand what was on the screen.) “So we haven’t watched it except a long, long time ago.”

I responded – quite wittily I might add! – “In a galaxy far, far away?” and started giggling like mad.

D and B both just looked blankly at me, until I finally stopped giggling and said “Ah well, you guys didn’t get my joke, it’s okay.”

D came over, put a hand on my arm, and said very seriously, “That was a good joke, yeeyee.”  (Yeeyee is what he calls me.)

Back to GUM brand toothbrushes and why I attended: as I said, my nephews love Star Wars, and we were encouraged to bring our children. I immediately RSVP’d and decided to bring both nephews (with the help of my sister, of course), though unfortunately, D had lacrosse.  So I went along with B and we had a blast, taking pictures with light sabers, meeting Darth Vader and a Storm Trooper, and enjoying the Ripley’s Believe It or Not space in Times Square, where the event was held.  I learned about proper brushing techniques for children and watched with amusement as new brushes that light up for 60 seconds – the proper amount of time for brushing the top teeth, and then the bottom teeth – were displayed, and just had a grand time.

Oh, the second reason I attended? Sherri of MomTrends is such a sweetheart, I absolutely adore her. Spending time chatting with her is always such a pleasure. Thanks again for inviting us, Sherri!

For more information about these awesome toothbrushes and full coverage of the event, check out Sherri’s post here. If you have Star Wars fans in your life, definitely check these out – I wish they’d make them in adult size, I was pretty jealous as I handed over our samples to my sister to give to D to use… but it was his birthday the next day, so I can’t complain too much! 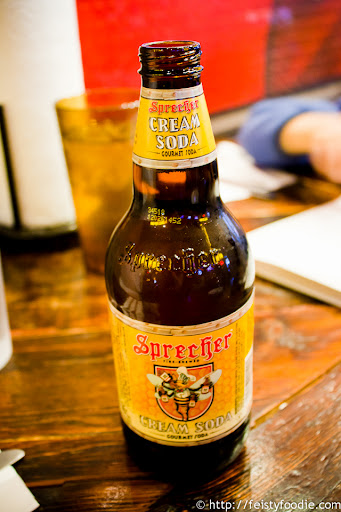 Though my usual beverage of choice with BBQ is root beer, they had Abita, which isn’t my preferred root beer, and then this Sprecher fire brewed cream soda piqued my interest.  Fire brewed? Unfortunately, it wasn’t all that interesting, just… like cream soda, which isn’t one of my favorite things to drink. Not since I was 10 anyway.  I would definitely pass on this next time. 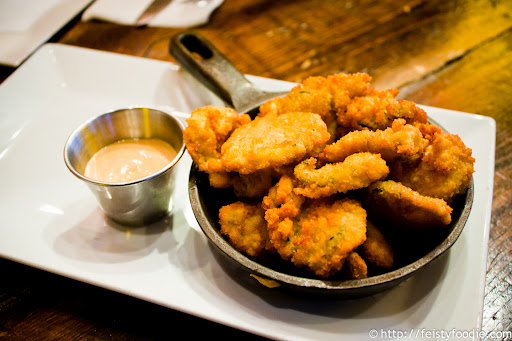 An order of fried pickles to start – since I’d introduced FeistySis to these, she’s been casually looking for them. These were markedly better than the ones I’d had at the Upper East Side location, but still missed something. Easy enough to eat, but just not the best I’ve had. 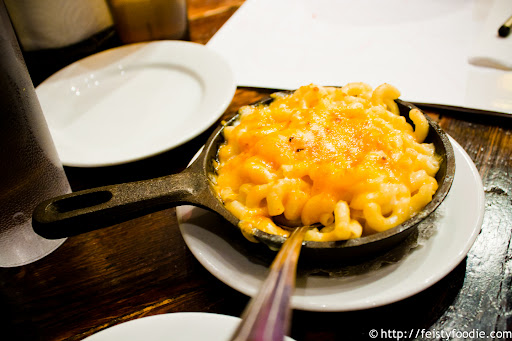 For B, an order of mac&cheese, which I found horrible. Gummy, with bland cheese (!!!), and barely worth touching. Luckily, his palate is less discerning than ours… though FeistySis opted to only give him a bit of this (and made the rest of his meal from her own platter).  I must say, though, I find mac&cheese in most BBQ places to be pretty bleh; unless they’re making it on the spot (which is rarely the case), it tends to turn out gummy and overcooked unless you luck into a fresh batch- which I have yet to do, unfortunately. 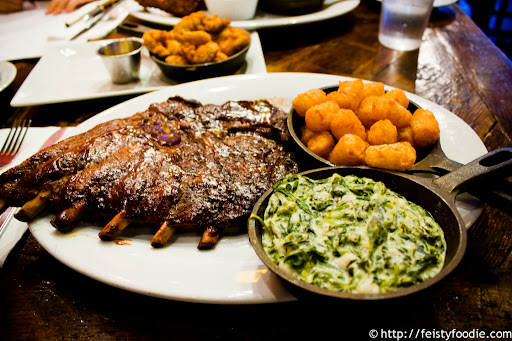 I ordered the sticky ribs with creamed spinach and tater tots.  The server – who was not exactly on top of her game – gave this to me and then said “oh, do you want a steak knife for your ribs?” I quirked an eyebrow at her and declined, then remarked to my sister, “There’s a problem if I need a steak knife for these…” but I should have listened and accepted.  While I do like ribs with a little chew to them – I don’t necessarily want them to always fall right off the bone – these were downright tough. Ummm, what?  Yeah, not good.  I took 3/4 of the ribs home, and eventually took all the meat off the bone and froze it instead of eating it; when I have time to make it into soup or hash, I’ll do so – but as it was, the meat was totally tough and unpleasant to eat the way it was. Tragic, really, because the creamed spinach was, again, some of the best I’ve ever had – garlicky, creamy, delicious – and the tater tots were great, fried crisp and just fantastic. 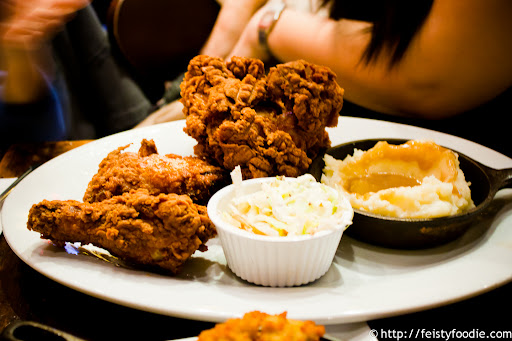 FeistySis ordered fried chicken with mashed potatoes and cole slaw. It pains me to say this – because there’s almost nothing worse in the world than bad fried chicken – but she really, really did not like her meal whatsoever.  She even made sure to impress this upon me the next time I saw her, about a week later, to make sure I wrote this in my review: the chicken was fried nicely, and the meat was not overcooked, with the breast staying juicy even after reheating it several hours later to eat as a late night snack – but there was just no taste to the meat.  While her standards are far stricter than mine – I’ve encountered a lot of fried chicken with this problem, and wouldn’t say they were horrible, though just not what I seek – I must say that her assessment was spot on. I sampled the drumstick, which was fried properly and juicy, with a crisp exterior, but the meat lacked any salt.  It was disappointing to say the least.  She also didn’t like her mashed potatoes, which I didn’t try. Overall, though, she firmly stated that she did not enjoy our meal and thought it was really disappointing and not very tasty. I picked wrong…

Yvo says: While the tater tots and creamed spinach were really great (and why don’t more places offer tater tots? Seriously!), the rest of the food – the main components of our meals – was just too disappointing for me to bother with a return trip. Sadly, as it’s in an area I find myself frequently lately, but there is excellent BBQ just a few avenues away… I will not visit here again.
not recommended

Please note that I attended the GUM Star Wars toothbrush event courtesy of MomTrends, but was under no obligation to post about my experience, positive or negative, and received no monetary compensation to do so. Thank you again to Sherri for her hospitality! Southern Hospitality was not affiliated with the event in any way. FeistySis graciously paid for dinner, but as you may all realize by now, I do not subscribe to the ethos that ‘if it’s free, it’s good’ !