Today, something interesting happens: a restaurant brand with locations all over the country opens in Long Island… before one has opened in NYC.  Gasp.  Long Island has something NYC doesn’t!  Okay, enough with being silly – I’m not sure they have plans to open in NYC just yet, in any case – but today marks the first NY location opening (please don’t tell me about the one in Cherry Hill, NJ; we all know that doesn’t count as NY). As such, I was invited to attend a press luncheon on St. Patrick’s Day to show off the menu a little bit and tour the space – and a gorgeous, two-level space it was, with plenty of rooms for conferences, business meetings, and even larger areas for small wedding receptions and the like. I really liked the space – it was bright on the unseasonably warm ‘winter’ day, and well-appointed. 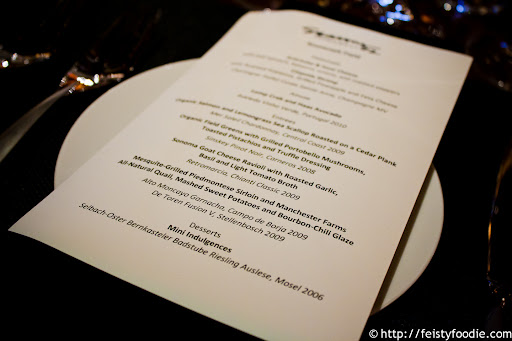 Menus laid at our places made me excited for what was to come. Please note: don’t drive to Seasons 52 and then indulge in their wine pairings. Have a designated driver jealously watch you imbibe, or call a car service. Don’t wind up tipsy to the point where you have to wait it out at the mall lest a concerned sibling scream at you on the phone, or worse, you decide to drive on easily the drunkest day of the year and a trooper pulls you over to give you a ticket and your SBA card does nothing to help you get out of it because YOU COULD HAVE KILLED SOMEONE OR YOURSELF YOU IDIOT.  None of these things happened to me – I drove straight home after lunch without incident – but seriously, don’t drink and drive.  It is one of the stupidest things you can do, and one of the most selfish as well, because you’re not just endangering yourself but all the people on the road around you.

But you’re here for the food, not a lecture on the dangers of drinking&driving, because none of my readers are that stupid, hmm? – not photographed were the flatbreads we were served while being given a tour: artichoke & goat cheese, which I thought was tasty, but I was much more enamored of the chipotle shrimp with roasted poblanos, grilled pineapple and feta cheese. The smokiness of the roasted poblanos was countered nicely with the sweet pineapple, while the feta brought a bit of creaminess to make each bite a delight. I don’t care much for shrimp, but texturally, their presence was felt and appreciated. 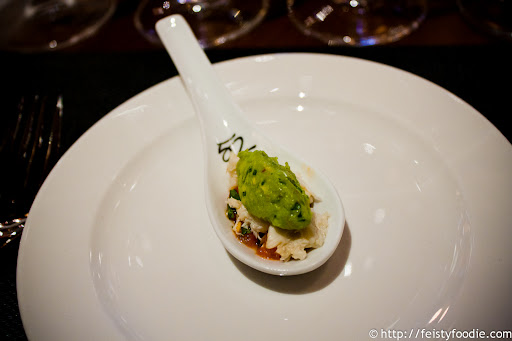 Once we were seated, the parade of food and alcohol began. Our amuse: Lump Crab and Haas Avocado was another lightly refreshing bite, a nice start to the meal. I must admit, at this point I was pretty confused; Seasons 52 is known for their seasonally inspired menu, but I somehow got it in my head that it would also celebrate local harvest.  This obviously is not the case; avocados are not local to NYC, as much as I’d like them to be.  I misunderstood something I read, actually. 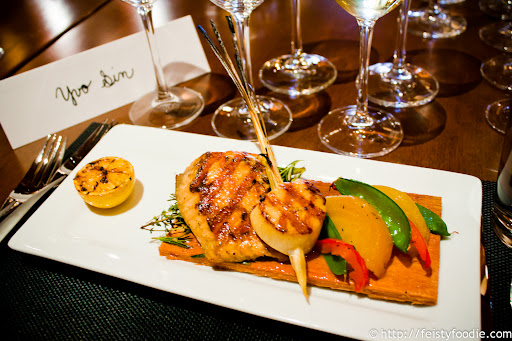 Please note that they smartly gave us smaller portions than one would receive were they to dine at Seasons 52 and order these dishes, as they wanted us to try a wider variety of their featured dishes and didn’t want us clutching our bellies in pain (or wasting a lot of food). Very smart – our first entree was the organic salmon and lemongrass sea scallop roasted on a cedar plank. The salmon was perfectly cooked – that is to say medium rare – and flavored very lightly, allowing the salmon to shine. The scallop, skewered on a piece of lemongrass, was also cooked perfectly, slightly medium rare as well, and the lemongrass scented it as I pulled the scallop off. I enjoyed how light this dish was, while being very flavorful so even though you might think “diet food!” it really left you feeling satisfied.  Even with the smaller tasting portion here. 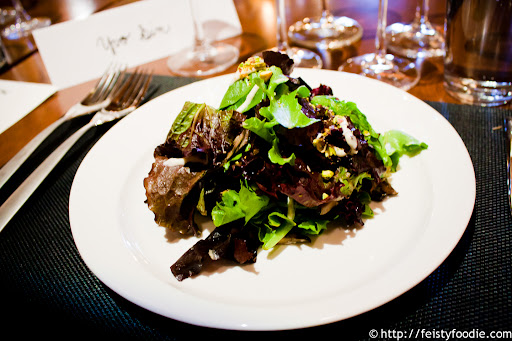 Okay… this was interesting. I didn’t snap a shot, but this was brought to the table on the plate, but inside a glass tube – think of a plain round vase with a very flat bottom, but no bottom – and then servers lifted and swirled the tube in a circular motion as they lifted it, to help disperse the aromas within.  It seemed kind of gimmicky to me, honestly, but there was no denying that the salad was very tasty: organic field greens with grilled portobello mushrooms, toasted pistachios and truffle dressing.  The swirling motion caused the truffle aroma to waft into your face in a rush, but just eating the salad would have been fine for that in my opinion.  I’m always suspicious of these types of fancy/gimmicky experiences though – like serving soup in pipettes or lasering vanilla beans inside wine glasses (I’ve eaten in some ridiculous places in my life). 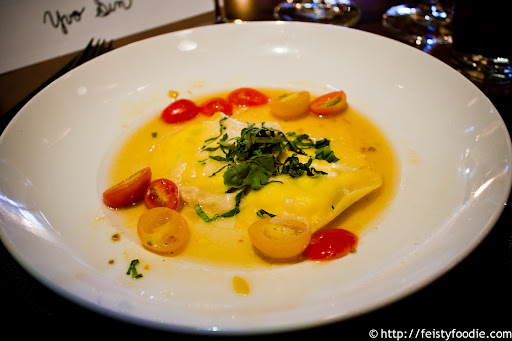 Easily my least favorite dish: Sonoma goat cheese ravioli with roasted garlic, basil and light tomato broth – not for much fault of its own, I just tend to dislike most goat cheeses. The pasta was incredibly thin – think wonton wrappers (which I’ve totally used to fake ravioli at home!), which I didn’t think held up well to the strong cheese – though the light broth was delicately flavored. Overall, I wouldn’t order this dish – not least of all because of my tendency to avoid most goat cheeses, but because I didn’t think everything meshed that well. The tomatoes were nice though – but I LOVE tomatoes. 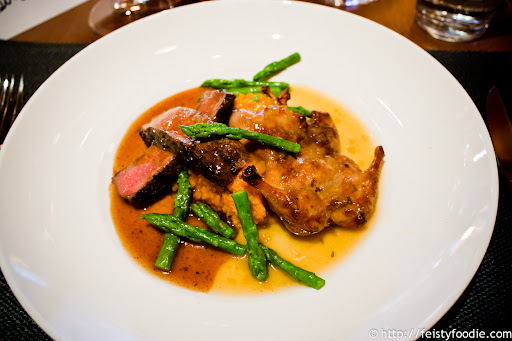 Our fourth and final entree, mesquite-grilled Piedmontese sirloin and Manchester Farms  all-natural quail, mashed sweet potatoes and bourbon-chili glaze, reminded me of yin / yang with the way it was plated. The quail was incredibly tender, not gamey in the least, and perfectly cooked, with a very flavorful jus underneath. The sirloin was also very intensely flavored, and the reduction underneath played off it very well.  Cooked to a perfect medium-rare… good stuff. 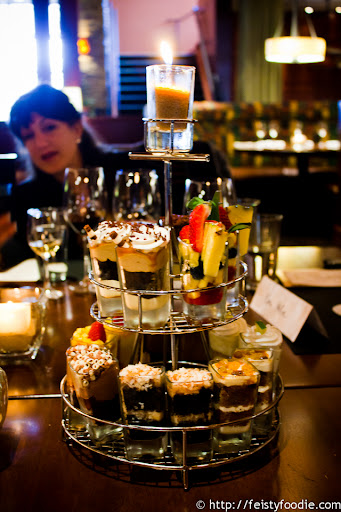 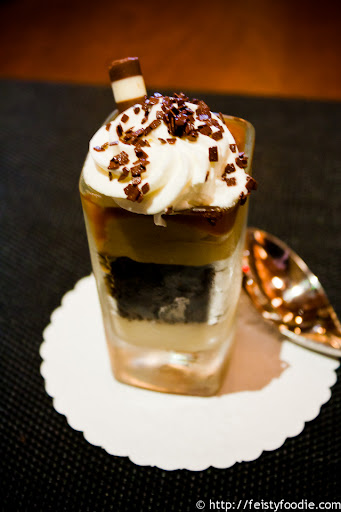 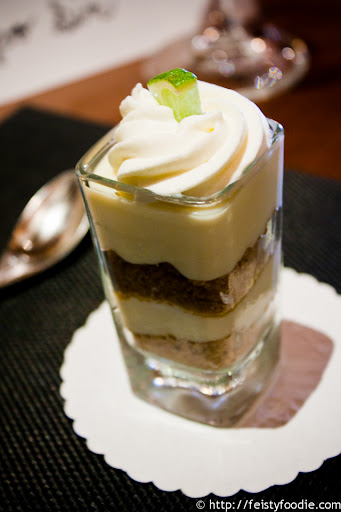 Last, but hardly least, a tower of “mini indulgences” was brought out for us to pick and choose.  I immediately chose the caramel macchiato, because I absolutely adore caramel, and noted how deliciously moist and dense the cake within was. I thought this was so good – and normally, it would have been the perfect sweet bite to end an already very filling meal – but after CS of Eat Big Apple told me how good his Key Lime mini was, I had to try that too. Light, gently tart, with an incredibly chewy  graham cracker layer… okay, yeah, this was good. Another perfectly sized treat to end the meal – I would definitely order this again. (Though I don’t believe Key Limes are in season right now either…)

Yvo says: The food was surprisingly very good – and I say surprising because I tend to expect myself to enjoy any given meal, so any variation (enjoying it a lot, or enjoying it less than I expect) surprises me. I definitely enjoyed this more than an average meal, and feel comfortable telling you that the food is very good… I can’t comment on prices as I didn’t see any, and service was obviously spectacular as I was there for an event. But speaking solely about the food, it’s definitely worth visiting, especially if you’re out that way – it’s right behind Roosevelt Field.
recommended

Please note that I attended this event courtesy of Seasons 52 – thanks for your hospitality! – but was under no obligation to post about my experience, positively or negatively, and received no monetary compensation to do so.