Ah, Valentine’s Day. A time to celebrate with your significant other and help the economy with the purchase of flowers, chocolates and an overpriced meal. CT and I don’t “buy in” to the hype of this Hallmark holiday, but we still celebrate in our own special way. Yes, I did buy her some roses. Last year, I cooked some of my famous BBQ brisket. This year we decided to go out the Sunday before to celebrate (and avoid those notorious Valentine’s prix fixe menus).

We decided to check out Alma 33, an Argentinian restaurant in the West Village that our friend KR had raved about multiple times. It just so happened that a Groupon came out a couple months ago that has been burning a hole in CT’s pocket. Once again, we found ourselves using a Groupon closer to its expiration date than we would have expected. They had a couple buying options but CT chose the “For $26, you get dinner for two Sunday–Wednesday (up to a $76 total value). Dinners for two include Five tapas (up to a $14 value each), One dessert (a $6 value).” Sounded like a good deal…

After arriving, we both remarked how we liked the design of the restaurant. It had a lot of light colored woods on the floors and ceilings. Candles all around made the place very warm and inviting. 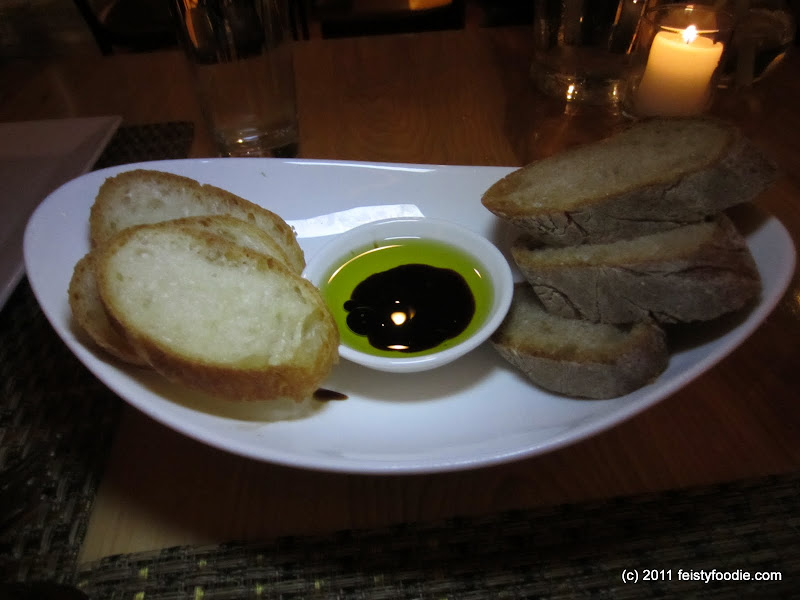 Our waitress was very friendly and didn’t give us any grief about using the Groupon. I think this was due to the fact that most tables seemed to be using the same deal too.

There was a pretty good selection of tapas from which to make our five selections from. Unfortunately, they were sold out of a couple, but we made do. All of the food came out super quickly. We immediately came to realize that most of the food seemed to be prepared ahead of time. I am including the price of the tapas for your reference since we already paid for them with the purchase of the Groupon.

Crostini Chorizo ($9). Chorizo over grilled bread with red chimichurri. Not the prettiest of dishes especially when the chorizo slices didn’t really “fit” on the bread it was plated on. The chorizo was pretty mild, similar to what we had at El Parador Cafe. However, the chimichurri had a more pronounced flavor with a bit of heat. 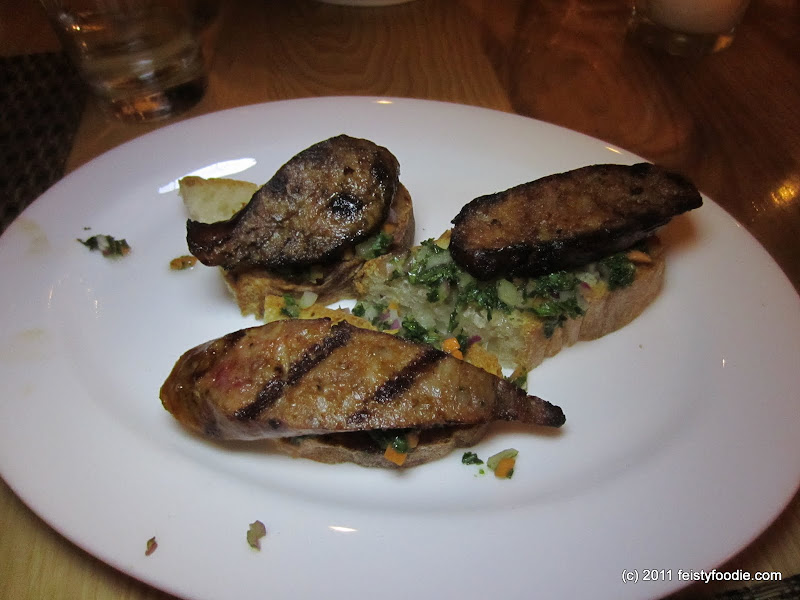 Catalunya ($9). Pan con tomate with Jamon Serrano & Manchego cheese. This dish proved that the food was made ahead of time because the bread was soggy. The thick slice of cheese, similar to Parmesan, was good but overwhelmed the ham. They need some pointers from Boqueria. 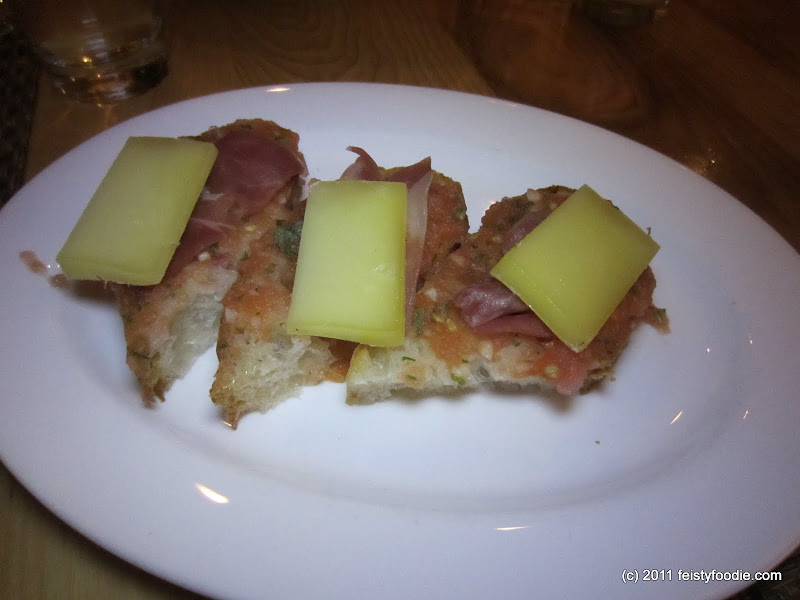 Humita Empanadas ($4.50 each). Corn empanada filled with corn, red pepper and fontina cheese. This was actually a pretty good empanada. It wasn’t too greasy, which is always good. The filling was tasty and full of sweet corn with just a bit of saltiness from the gooey cheese. 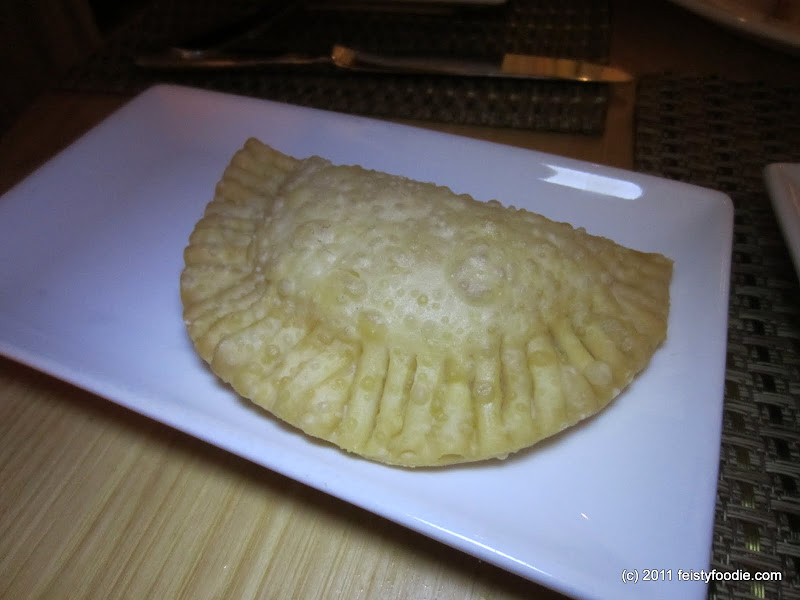 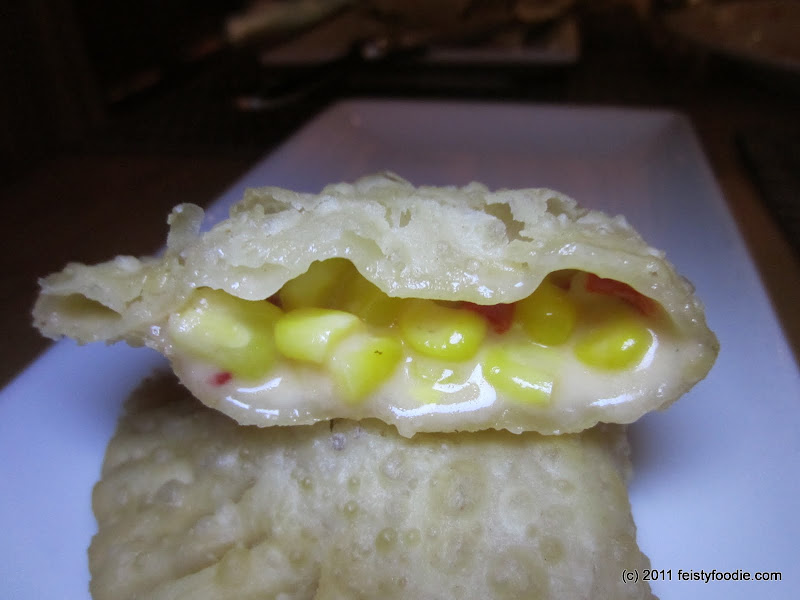 Polenta Frita Con Costillas De Res ($10). Fried polenta with short ribs fried sliced polenta with malbec-braised short ribs. We were really looking forward to this because it sounded great! As you can see the short ribs looked terrible. Meat should not be gray. I wonder when they cooked it? It was also unfortunately pretty flavorless with no seasoning whatsoever. The fried polenta was crispy but also failed due to a complete lack of salt. After asking for asking for some hot sauce to make the food a little more palatable, we were presented with a small bowl of TABASCO! It helped, but we were very disappointed they don’t make their own hot sauce. They seemed to make their own chimichurri, so why not hot sauce too? It isn’t very difficult. 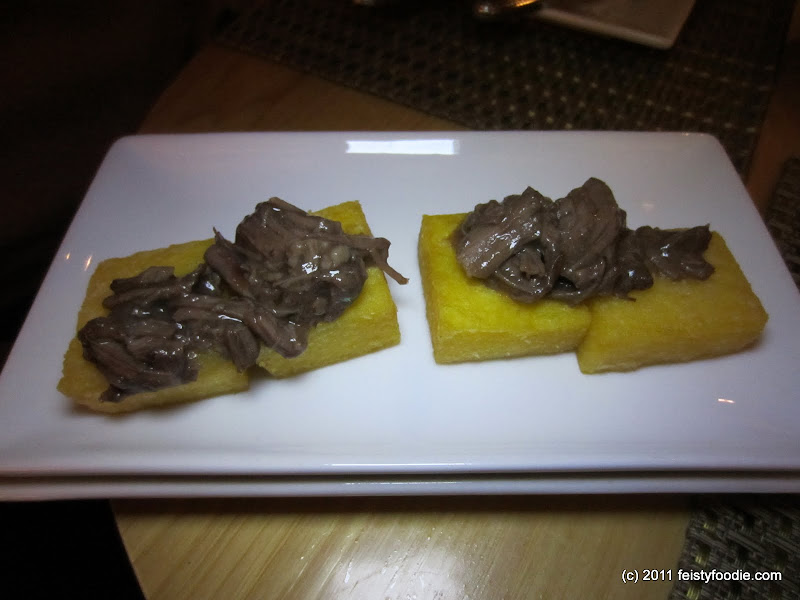 Pintxos De Milanesa ($9). Veal milanesa skewers with pobre sauce. The veal was ok but again the breading lacked seasoning. I’m not sure if they ran out of “pobre” sauce because it was the same chimichurri. At least the sauce helped with the flavor. 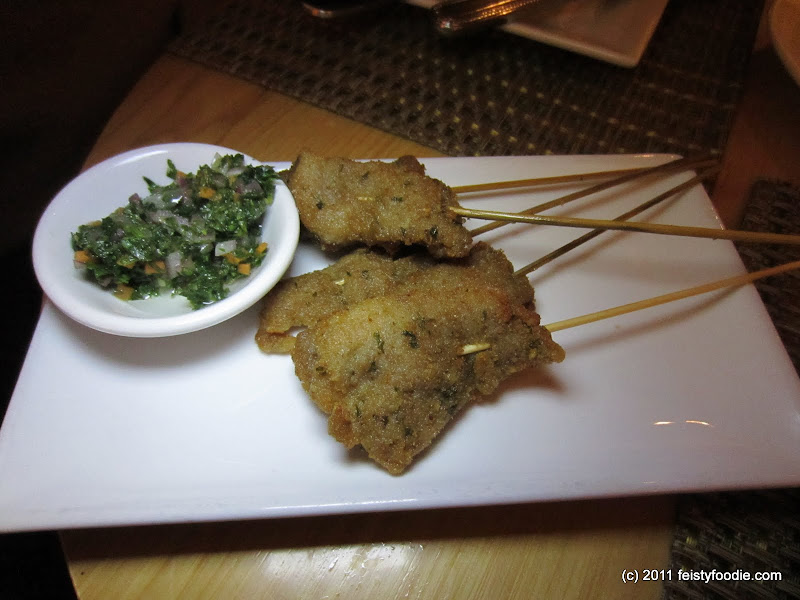 Since we had a feeling that five tapas was not going to be enough food, we added on an entree. KR mentioned that the paella was very good, so we chose that. After ordering, our waitress also remarked that it was a very good choice and one of her favorites on the menu.

Paella Argentina ($22). Saffron rice with green peas, red pepper, oyster mushrooms and braised pork shoulder. It is kind of hard to tell from the picture, but it was a pretty small portion for an entree. I also immediately noticed that the rice looked pretty mushy, which it was. There was a fair amount of pork shoulder, but not only was it also not seasoned there was lots of gristle/cartilage/fat to sort through. Also strewn throughout was a large amount of practically raw garlic slices. Since it was dark in the restaurant, both of us accidentally ate a piece or two which was not pleasant. I hope this wasn’t representative of all Argentinian paellas, if that’s the case I’ll stick to the Spanish version. 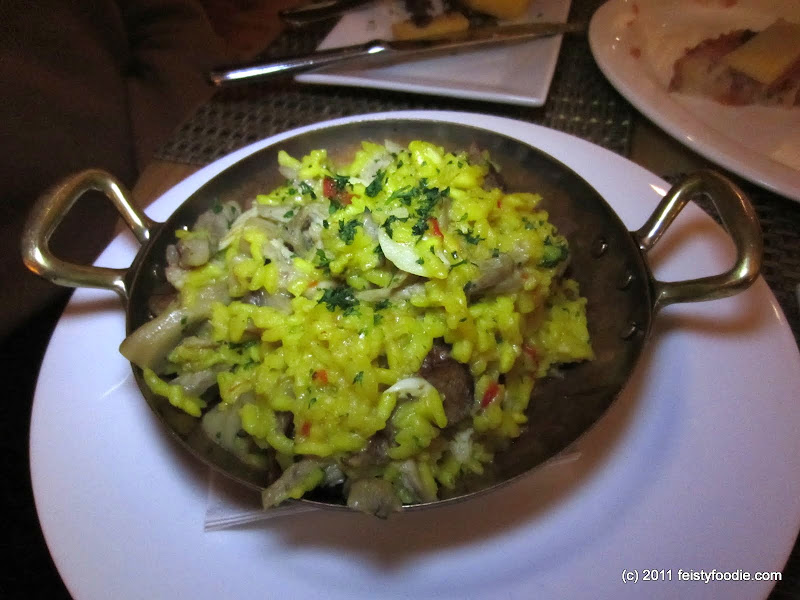 For dessert, we chose the special which was basically a strawberry shortcake. It was quite small and barely took up the corner of the plate. Good thing this was included in the deal otherwise it would be hard to justify the normal price of $6. However, it was tasty and helped counteract some of the garlic from the paella. 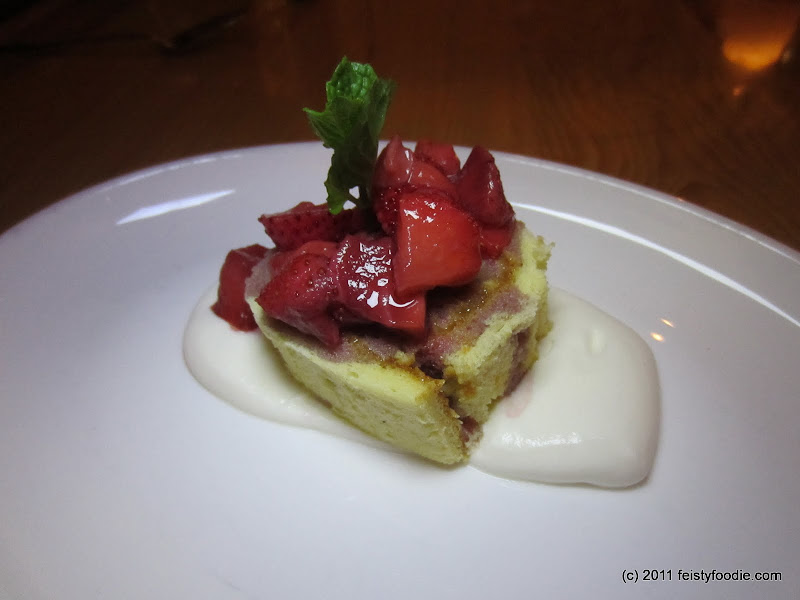 All in all, the food was pretty bad at Alma 33. Hardly any of it was properly seasoned and a lot seemed to be made way ahead of time. I wonder if the Chef is off on Sundays or that is how it usually is? Maybe the crush of Groupon redeemers made them sacrifice quality to get food on the plates? Though the restaurant wasn’t especially busy that night. It was unfortunate because KR really loves this restaurant and we value her opinion. We ended up saving about $20 based on the a la carte prices, not the $50 stated in the deal. In such a highly competitive city like NYC, it is very hard to give any restaurant a second chance since there are so many others to try, so I don’t think I will be returning to Alma 33.