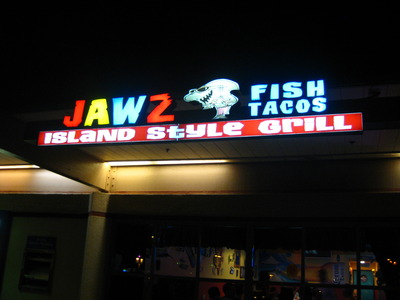 After our hike, we headed back to the resort to clean up and head out to eat again.  I suppose some might call this the rehearsal dinner, but there was no rehearsing… just a lot of eating, hanging out with people, and catching up – for some of us.  Jawz was super casual and awesome; as I took the above photo, a guy was walking in and held the door open for me and told me that he designed the logo himself.  Turned out he was the owner, and we chatted briefly about the food and whatnot.  I had my first experience with POG juice – the owner said he makes his own.  Passion fruit, orange and guava juices – it was cloyingly sweet and syrupy thick, but that’s how it’s supposed to be – just not for me.  Way too sweet for my tastes, but I know a few other people really liked it.  (And I bet it would be really good mixed with alcohol…) 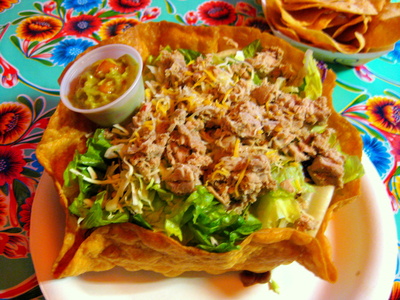 Because neither of us were very hungry, EPS and I decided to split an ahi fish taco salad.  When it arrived, I was kind of like, errr… because it looks like canned tuna.  Eating it proved that it clearly was not canned tuna – the fresh taste dissuaded the notion from my head very quickly – but I was disappointed that the tuna was broken up so much. 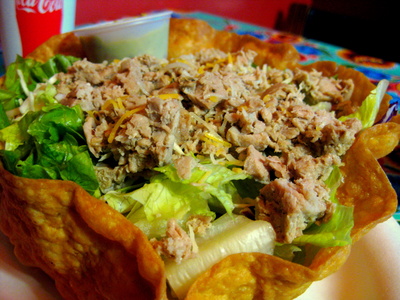 Foolishly, we just picked at the top part without paying much attention so we were REALLY full by the time we realized that hiding underneath the lettuce was all the interesting bits – beans, cilantro rice (which I really liked a lot), cheese… doh!  Luckily, we’d jazzed up the top part with their salsa bar – black olives, various salsas, extra cilantro, and a bunch of other things I’m having trouble remembering… What I DO remember, however, is the existence of a salsa whose name, according to the card in front of it, was “Special Pink Sauce.”  For your fish tacos.  Yeah, we’re immature and had a field day with that…

Yvo says: Universally, everyone raved about the food – the various fish tacos ordered, taco salads, everyone had a great time.  I only wish I’d been hungrier to enjoy the food more – but looking at the pics, this was the third meal of the day, and my body simply wasn’t ready for that much food (and so much of it rich, heavy, fried).  Regardless, everyone around me enjoyed their food very much, and I would definitely go back if I visited Maui again!
recommended