What do any normal people do after going just about stir-crazy while being forced to stay inside by Hurricane Irene for two straight days?  They eat pizza and go bowling, of course, and so that’s what Beer Boor and I did the Monday after Hurricane Irene came, left our two neighborhoods untouched (but messed up plenty of other places, unfortunately), and disappeared. 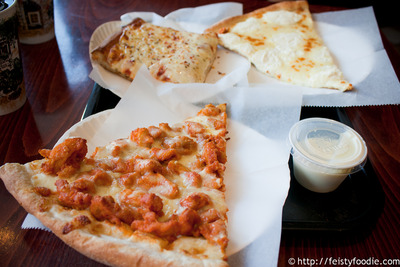 Our first stop was Pizza Classica, sitting snug inside a large shopping center anchored by Stop&Shop.  A reader recommended this place to me a few months back, though I couldn’t remember what was recommended.  I just walked in, noticed and appreciated that along the right-hand side is a pizza-by-the-slice counter for you to look at slices to pick out and order, and the left hand side is a dining area split in two – one part for people to have table service (this part separated with dividers and a sign that says “Please Wait To Be Seated”), and another part for those like us who just wanted to grab a quick slice and have a place to sit for a few minutes while we did so.  I like that.

In any case, I walked straight up to the case and started peering at the slices.  I immediately stopped when I saw what looked like and was confirmed to be Buffalo chicken pizza!  A few months ago, I was making pizza at home every Friday, and every week I tried something new.  One of those weeks, I’d successfully made Buffalo chicken pizza that I really liked, though I’d never ordered it anywhere.  Though my usual MO at a new pizza joint is always to try their plain slice first, I wanted to try this, so I ordered that.  It looked pretty big, so I stuck to that.

Beer Boor ordered the white slice and a Sicilian, in the background.  I’m sure he’ll be by shortly to tell you what he thought of them. 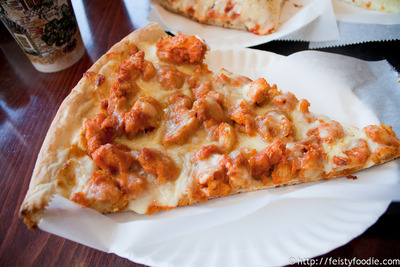 As for my slice… it was packed full of chicken on top that was pretty spicy.  I’d asked for blue cheese on the side, which was happily provided, but unfortunately, whatever kind they’re using was terrible.  (It tasted plasticky and just like bad bottled blue cheese dressing.  There are only a few brands of bottled blue cheese dressing that actually taste good, though, so they just picked wrong.)  The pizza itself was tasty with its toppings, though it grew progressively spicier for me until I couldn’t handle it anymore (I’m a spice-wuss).  I had to trade Beer Boor for his white slice; I’d never had a white slice before but I don’t think I like them (which is why I’ll let him tell you how it was). 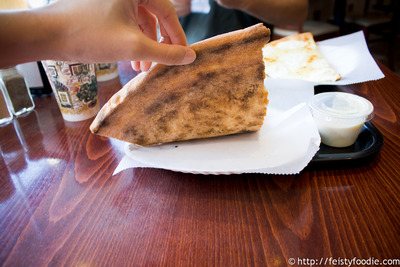 Obligatory upskirt!  I thought the crust was decent.  This is like the kind of pizza I grew up eating (in Queens, NY, yes).  Not super thin or cracker like and definitely not too thick.  I like.

And then we went bowling where I had my butt kicked twice in quick succession, even with handicaps. Beh.

Yvo says: While I was unable to eat more than half my slice, that wasn’t their fault but mine.  I thought the pizza was perfectly good, and I’d have no problem going back if I’m in the area or even getting delivery from them (I’m pretty sure they’d deliver to me, even though we’re not super close).  Next time, definitely trying a plain slice as well!  And maybe eventually even some pastas or the like, they have more than just pizza on the menu.  And if you’re the reader who suggested this place – thanks! What did you recommend again?
great neighborhood pizza place (no need to go out of your way)