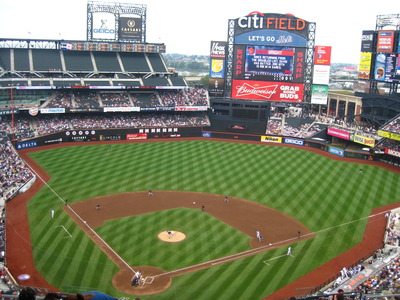 You all should be very familiar with this photo: it is yet one more photo of David Wright’s first at-bat of a game I attended in early August.  Though posting about Citi Field has become less and less frequent, I’ve continued to go to games and either eaten something I’ve posted about ad nauseum already (Mama’s hero, Box Frites…)… or this.

I decided on a whim that Beer Boor and I should meet in Flushing before the game and pick up White Bear – dumplings, of course, and try their dan dan noodles, which I’ve been curious about for a while.  So we did just that.  The above dumplings, I’ve posted about in the past: 12 for $4.50 and I challenge you to find any more delicious Sichuan dumplings in chili oil topped with pickled mustard greens anywhere in NYC.  If you find such a place, tell me, because I can’t imagine anything better than these perfect little nuggets: the skin so soft, yielding to a perfect porky bite of wonder, and the slight kick of chili oil, the pickled crunchiness of the mustard greens… just amazing, delicious, and awesome.  My favorite dumplings, really… yep. 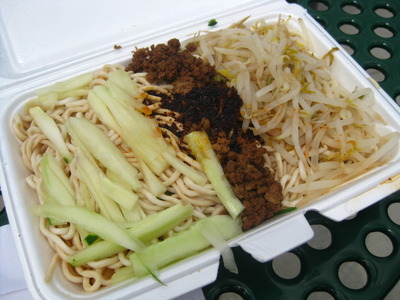 As for the dan dan noodles, this box filled to the brim with noodles, cucumbers, some bean sprouts, and chili spiced pork bits, cost us only $4.25.  How great is that? 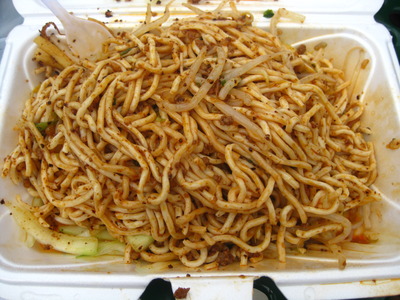 After I tried to toss it all together as evenly as possible… this was the result.  I really enjoyed this, slightly spicy, with the cucumber slices there to cool my mouth if needed (only minorly), the noodles very springy.  I would definitely order this again – it might even become my favorite dan dan noodles (note: I’ve had dan dan at maybe 3 or 4 places in my life, so I am no expert at all… yet… though I can’t always eat it because if it’s super spicy, I have to stop eating). 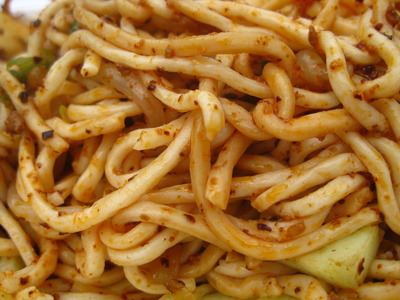 See the little chiles ground up?  So good.  Actually, I went back two days later when I went to another game, with TC this time, and and we repeated the same meal.  The noodles weren’t quite as good as the first time I went, but still very good.

Just so you know, it totally works to go in and ask “dan dan mian?” and look really confused, because the guy will totally take pity on you and tell you what number it is.  It’s #12 and the dumplings (which are wontons, according to their menu) are #6.  I definitely order by number (and one time, I tried to guess, and ordered, and the guy was like, no, you want #6, and I said, yes, please) – they speak Mandarin there, and mine is horrible.  They’re really nice though, but I think they might recognize me because I go there fairly frequently and bring lots of people there. 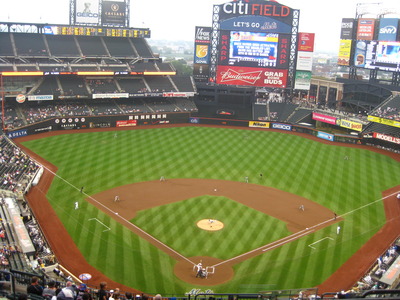 I love White Bear, and I love even more that from the Flushing Main Street 7 train station, it’s on the way to my stadium – I can always stop in, grab something and bring it into the stadium to eat.  And because I’m all about saving money, when you get to the stadium, just go to one of the Budweiser Designated Driver booths, sign up to be a designated driver, and get a coupon for a free small soda!  It’s totally big enough to quench your thirst while you’re there.  (I didn’t say this: if you really want to drink afterwards, just take the wristband off.)