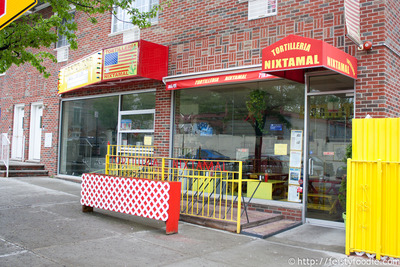 I’ve long heard about Tortilleria Nixtamal and the fantastic tortillas made there, so I took another foray into Corona one day before a Mets game and decided to sample the wares. 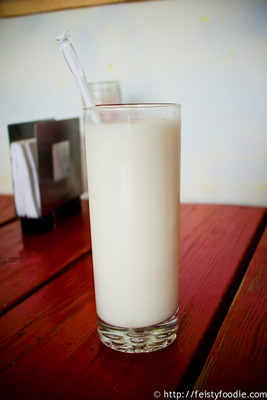 When I saw horchata on the menu, I knew I had to order it.  The rice milk drink is right up my alley – cold, refreshing, and lightly ‘spiced’ with nutmeg.  I order this almost anytime I see it on the menu (exceptions are when I see other things on the menu that are higher up my “love to drink” list than horchata, obviously!). 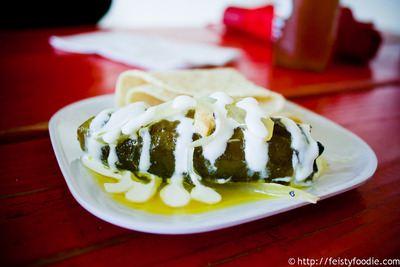 Beer Boor wanted to try the chile rellenos, which was stuffed with tuna.  I didn’t find myself too interested in that, both because of the flavor and because it was spicy, but it was finished quickly without complaint, so I imagine it was enjoyed. 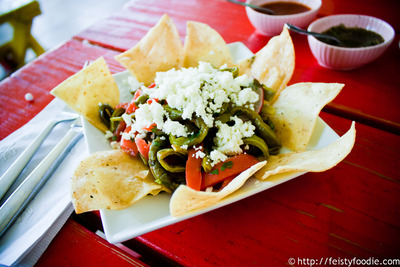 I know I’ve had nopales (cactus) before, but I decided to give it a go here as well.  The cactus was tender, pickly, topped with cheese, and ever so slightly slimy.  It was not appreciated by Beer Boor, though we both agreed that drizzling a bit of the accompanying salsas (here used as the Spanish translation, ‘sauce’, not ‘salsa’ like the stuff you may be used to) really boosted the flavor and pleasure factor. 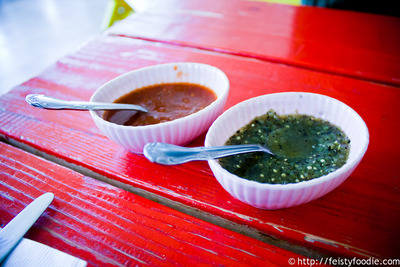 Salsa roja y salsa verde.  The red was ever so slightly spicy, while the green just provided a nice verdant (yes, I just used a word that means green to describe a green sauce) taste to it.  I liked both a lot, but being that I don’t eat much spicy food, I enjoyed the green more. 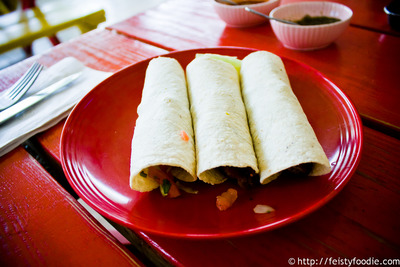 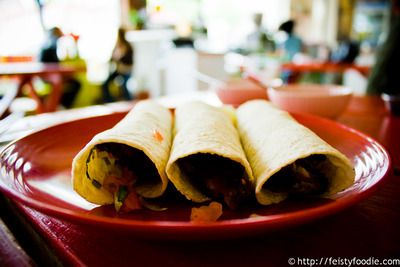 I took my time trying to photograph them though. 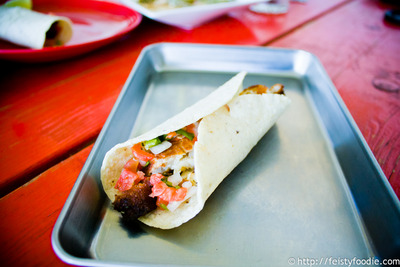 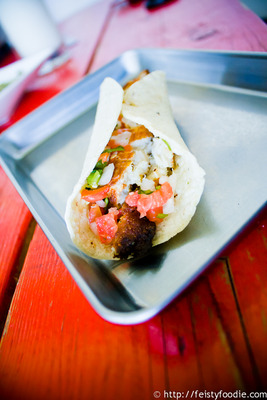 I really enjoyed the crunch of the fish’s exterior, coupled with the softness of the tortilla and the juiciness of everything inside.  Sure, a drizzle of the green sauce was nice, but it really didn’t need it. 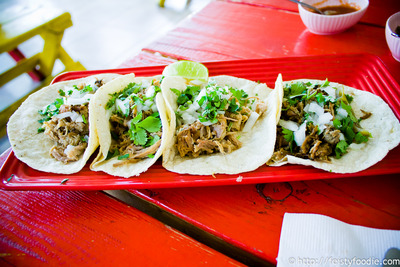 Next up was our platter of pork tacos on the left, and our singular addition of the barbacoa (lamb) on the right. 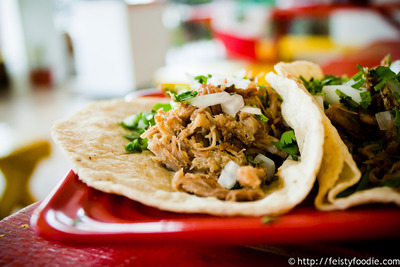 The pork was flavorful, but it bordered on the dry side.  This one definitely needed the drizzle of green sauce I put on it; I wanted more oomph from it than it gave me.  Unfortunate, but as it was easily fixed, I didn’t fret. 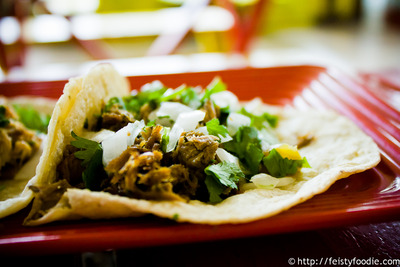 As for the barbacoa – I like lamb, so I was surprised to find this way too gamey for me.  I hardly took two bites before I had to give up.  Luckily, Beer Boor doesn’t seem to mind gaminess, so no food went to waste. 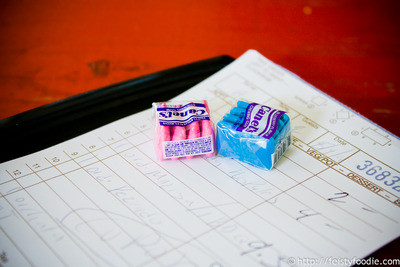 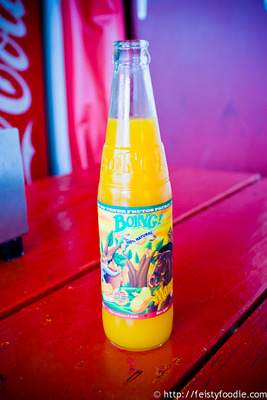 A short week or two later, I attempted to visit another restaurant in the area only to find that place is closed on Mondays (and I’ll be posting about them shortly, as I managed to visit successfully a few times later).  So I returned to Nixtamal, and they were out of horchata… so I ordered mango juice.  This is what I received, which was tasty. 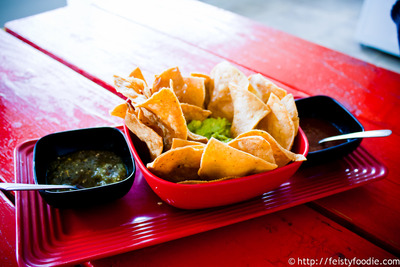 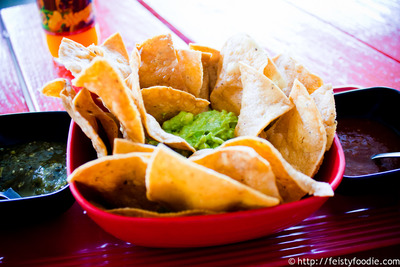 This is what we got, accompanied by the salsa verde again, but this time with a slightly different salsa roja.  This one was sweeter, a bit sour, and more like one of the sauces we’d gotten at Pelea Mexicana than the salsa roja we’d gotten last time.  I like this one… sometimes. 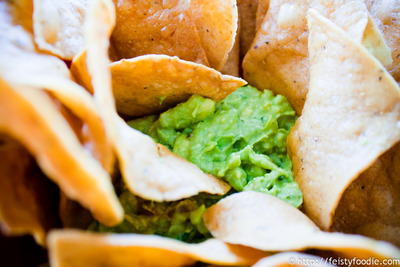 As for the guacamole, though it doesn’t look like an awful lot, we actually had less chips than we ‘needed’ for the guac.  Perhaps that’s because Beer Boor wasn’t eating much guac and instead was just dipping it in the salsas.  I don’t know.  But I happily ate the chunky guac, which was more than good, just short of excellent.  (I like my guac a little more lime-y and a lot more cilantro-y, but that is definitely personal preference!) 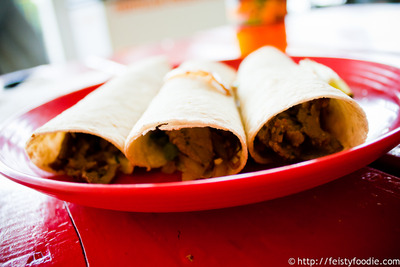 We decided to try the steak tacos, as we’d had the pork, fish and barbacoa last time. 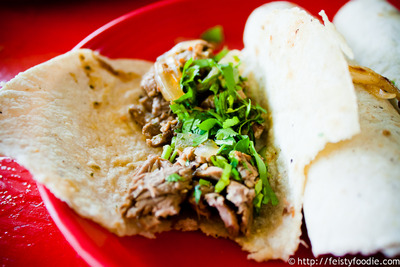 Unfortunately, again, this suffered from a touch of dryness.  Easily fixed by adding one of the salsas on our table, but I wanted to not need that.  Ah well. Beer Boor also ordered the tostada, sort of an open faced quesadilla.  I don’t remember exactly what the topping was – steak, I think. 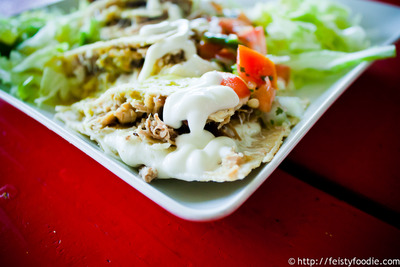 I only tried one piece, because the guac had filled me up, but I found this tasty enough.  Not necessarily to my tastes, but I could see the appeal of eating this every once in a while.  Like most of the other food there, it was good, and jazzed up with salsa easily… though this one didn’t need it.

Yvo says: I really liked Tortilleria Nixtamal, and I will definitely be back to eat my way through the rest of the menu (though I think at this point, I’ve hit most of the highlights).  The prices are very reasonable, and it’s only two stops from Citi Field… I can stop by on my way to the game any time I want!  Yum!
highly recommended