A couple of weeks back, CT & I decided to stay local for “date night.” While Murray Hill isn’t really a foodie neighborhood, there are still plenty of restaurants around that serve up some tasty meals. One such place, Reserve, has treated CT well a couple of times in the past. It is a Thai tapas and wine bar tucked in between the riff-raff of Third Avenue.

They have a large selections of wines with a few on special. I forget which red we picked, but it was under $30 and quite drinkable.

After reviewing the menu, we ordered a bunch of tapas. Although the restaurant calls itself “Thai inspired,” it is simply a Thai restaurant. The tapas are simply smaller versions of traditional Thai dishes. You will not find the least bit of Spain in the place, not even the traditional little round plates.

CT says: I like that they serve mini-portions of everything, include their curry dishes. It provides a nice opportunity for two people to try more items without over-ordering. Perfect for us!

First up, some Pork balls. These were meh-tastic. They were definitely frozen and super chewy. The excessively sweet, sweet & sour sauce on top made the dish even worse. 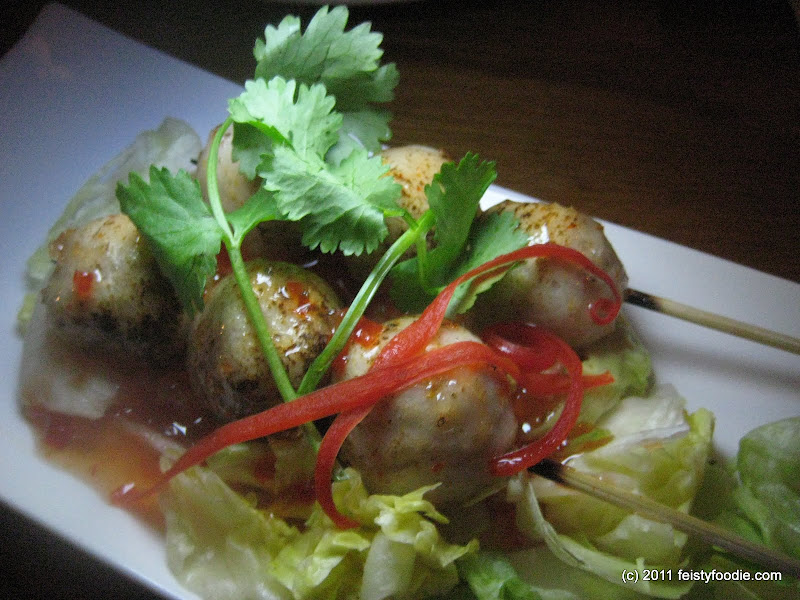 CT says: Agreed. Definitely not something I would order again. Although, I found the sweet & sour sauce helpful in masking the otherwise unappetizing dish. I probably enjoyed the iceberg lettuce the most in order to freshen my mouth after eating the sad pork.

Next were some Summer rolls. At least these were made fresh. Other than that, they were pretty average. The crisp veggies balanced the less healthy items we ate. 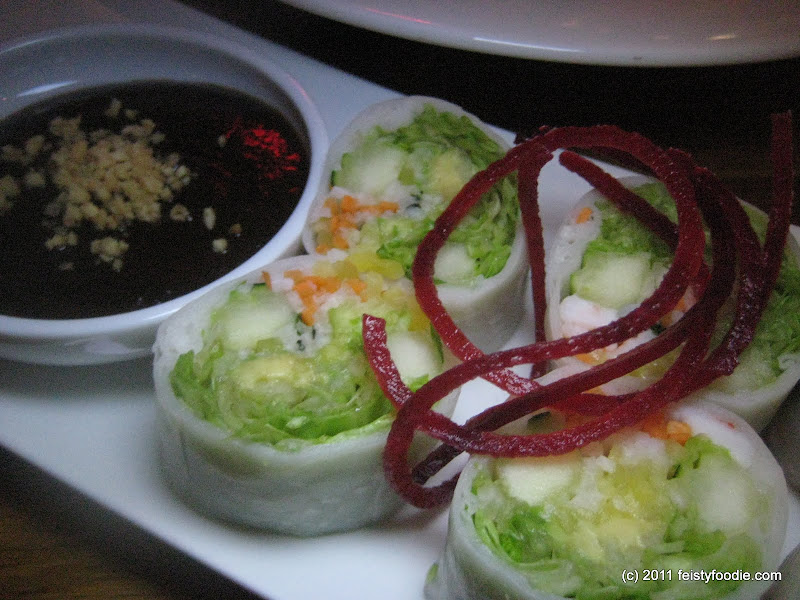 CT says: I really like summer rolls, so they are my staple item in any Thai meal. It’s hard for them to be bad, but easy to be average. These were average, but I was still happy with them. The peanut dipping sauce was nice too; not too thick or too thin.

Chicken Laab. This was actually pretty good. While it wasn’t even in the same universe in term of heat compared to the duck laab at Kin Shop, it had some of that good back of the throat heat. Yes, it was white meat. The seasoning more than made up for that. 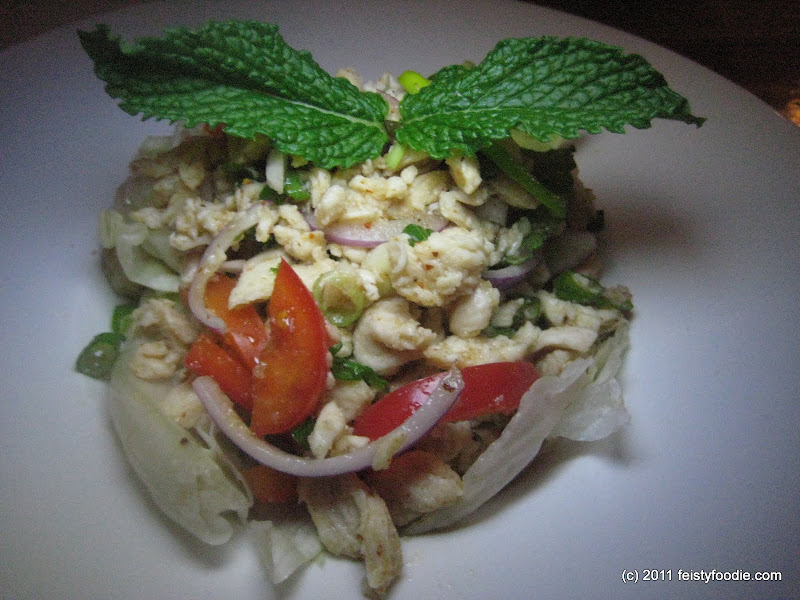 CT says: I really enjoyed this appetizer, very light with a definitely kick in the aftertaste. I would order this again.

Roast Duck over Rice. Unfortunately the duck was cooked poorly. As you can see there was a lot of gristle and the fat wasn’t rendered out as much as it should have been. 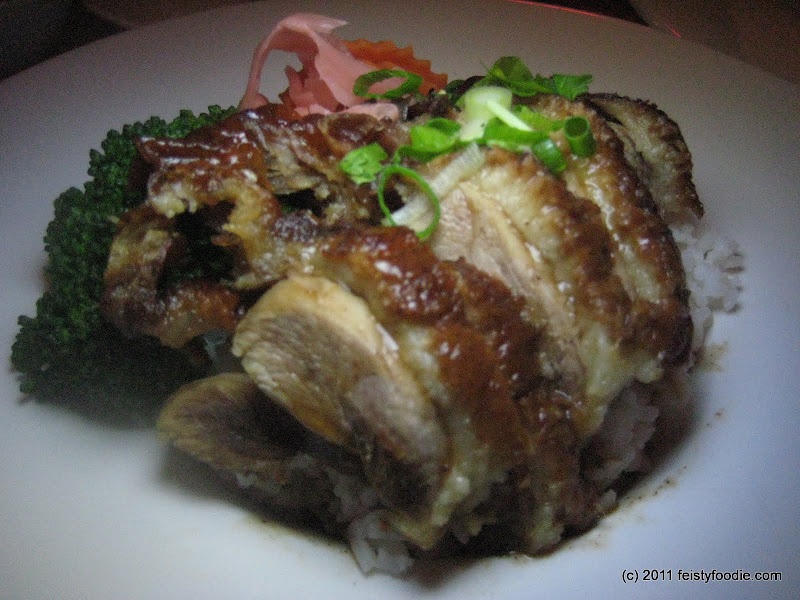 CT says: Agreed again. I thought the flavor of the duck was good, but just too fatty and not in a good way. I previously had the duck wraps and those were fantastic, so I thought this would be good too. However, I think the wraps benefited from having select pieces of duck placed into each wrap instead of a whole portion with all the fatty pieces. Next time, I’ll stick with the duck wraps.

Finally, some Massaman Beef. This was ok. The sauce was able to mask the quality issues of the meat. I have become a fan of Massaman flavors since the goat we had at Kin Shop. The side of rice was helpful in sopping up some of the tasty sauce. 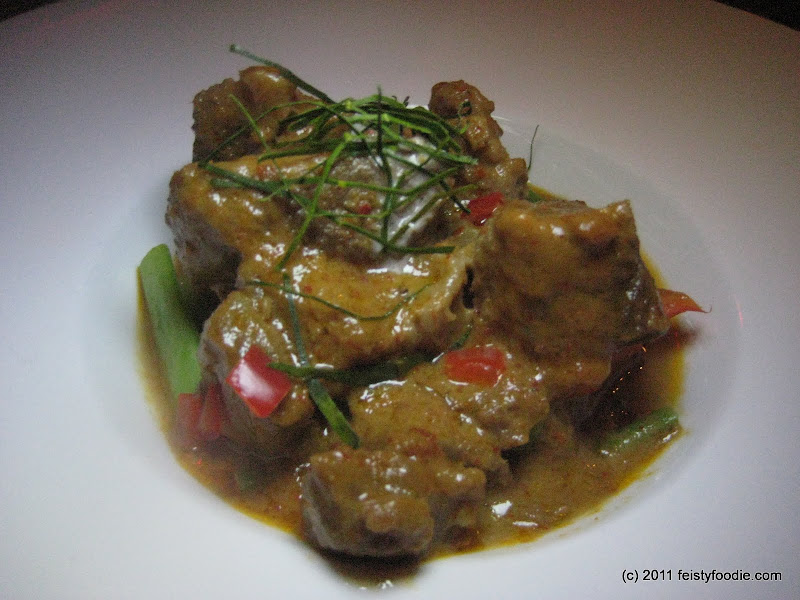 CT says: The beef was terrible. I got a huge piece of fat and almost no meat. The curry was ok, but I was already incredibly disappointed. I had been here twice before and always had delicious food! I was so excited to finally bring TT here to experience it and then the meal was not even close to expectations. Maybe it was an off night or the wrong dishes or maybe the restaurant just went downhill in the last couple months? Whatever the case, I was disappointed. I would like to go back again one night to try the original dishes that I had, to see if those are still good, but I have a sneaking feeling I won’t convince TT to join me again.

All in all, I was disappointed in the restaurant. It was basically small versions of mediocre Thai dishes. At least it wasn’t expensive. CT felt bad because when she went on two previous the food was much better. If you are looking for a reasonably priced glass of wine in the area, be sure to stop in, but skip the food.