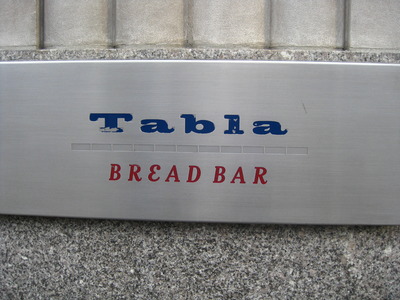 Oh, Tabla.  You are connected to Eleven Madison Park, which I adored earlier this year.  You are also home to what has been derided as “overpriced Indian food” constantly.  I have an Indian place I love to go to, so I had no interest in trying you.  But now, you are closing.  At the end of the year, you will close your doors forever, and still I hesitated.  Should I go?  Should I pretend you never were?  I enjoyed a tikka masala dish I once had from you via Fresh Direct, and I do enjoy Danny Meyer’s choices regularly. 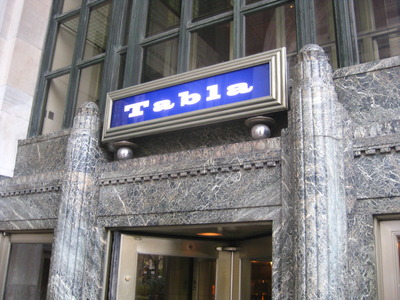 After a bit of debate via Twitter with fellow food bloggers Gary of Foodie Call and Steve of Law & Food, I decided that yes, I should at least go once before it closed.  So it was one windy Friday, as I was shopping in the area (at Bed Bath & Beyond: BEST AUNT EVER, don’t worry my nephews are too young to know what the internet is much less be able to access my food blog), I decided to wander over and see if they could accomodate myself (and a friend I dragged with me) for a late lunch.  Unfortunately, it got to be later than I anticipated before I wandered into the huge space, and they were serving only a limited menu.  Ah well… my fault for dawdling. 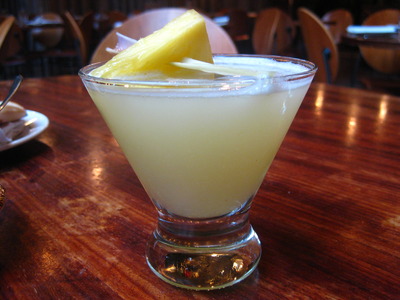 I’d briefly read about their amazing cocktail menu, and decided I should order a cocktail to make up for my missing the lunch prix fixe menu.  I felt foolish ordering a Tablatini, but I do remember choosing it for its fresh pineapple juice.  It also had Skyy Citron Vodka, and perhaps lemongrass, since I recall being happy the third ingredient didn’t overwhelm; what I enjoyed about this cocktail, as I continue to explore my cocktail tastes, was that with each sip, the very fresh and ripe piece of pineapple sitting atop the drink, its aroma would waft into my nostrils, enhancing the sensation of drinking pineapple juice, muting the alcoholic burn, making the overall drink very refreshing.  Even more enjoyable was its unassuming position accompanying my meal; it never fought with the flavors of my food, but simply enhanced them.  Unusual, I thought, not just for a cocktail in general, but for a cocktail with Indian food, a cuisine I’ve always had trouble pairing with alcohol.  Lovely. 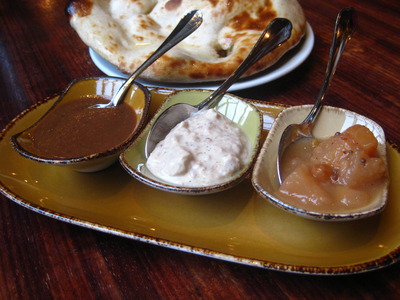 BBE considered the menu and decided we should have a trio of chutneys.  I obliged, and allowed him to choose all three, because I was busy trying to figure out what I wanted to eat; the dish I’d been looking forward to trying, rice-flaked hamachi, was not on the limited menu. 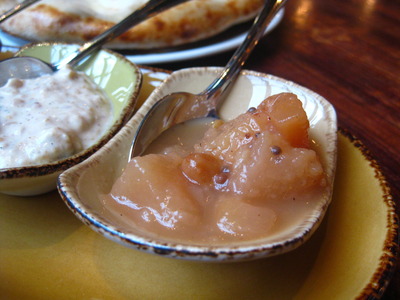 Pear chutney, which was interesting enough… but not to my taste.  BBE said it was too chunky to work with, though the flavor was fine. 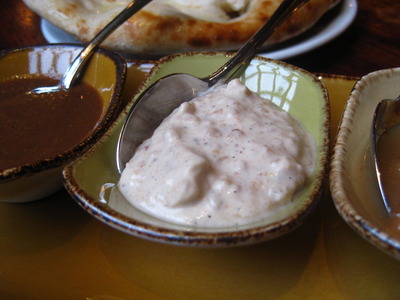 Peanut chipotle raita, which tasted like peanut sauce but better.  I was trying not to lick the spoon here.  REALLY quite delicious.  BBE graciously allowed me to eat most of this one. 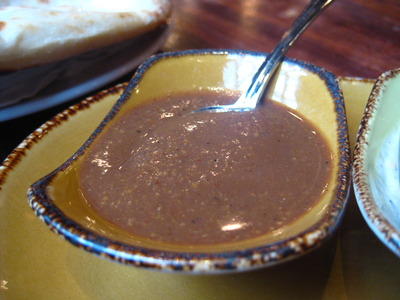 The third and final was tamarind-jaggery, which I left alone mostly.  It was a bit sour, and a bit… well, not to my liking.  BBE, however, really enjoyed the sourness of this one and dipped much of the other foods in it as well.

When I asked what made him choose those three, he said they were the most unusual of the choices, so they made the most sense.  Fair enough. 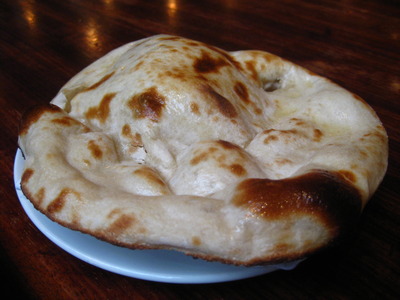 Our pillowy garlic naan arrived along with the chutneys. 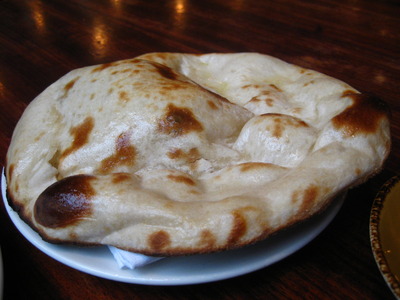 Gloriously and generously brushed with what I think was ghee, it smelled amazing. 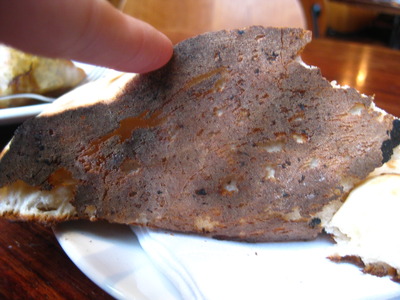 The bottom was crackly, the top was puffy, and this was devoured quickly.  I’ve heard before that this is the best naan many will ever eat.  I can’t say I agree – I look for a different quality in my naan – but this was pretty good.  I just like my naan ever so slightly more bready, less cracker on the bottom… but that’s personal preference, I make no comment on what’s authentic or not. 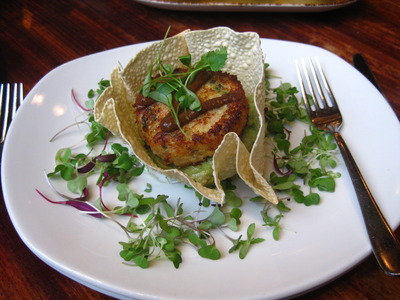 I wound up choosing the crabcake with Goan guacamole for my appetizer.  The presentation was very cute. 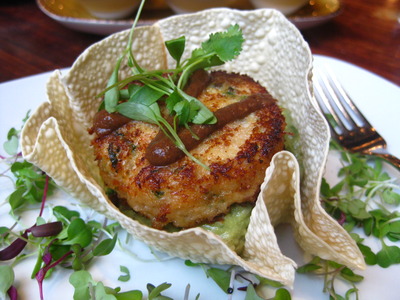 The crabcake sat inside a pappadum that was less spiced than I’m used to, but just as crackly. 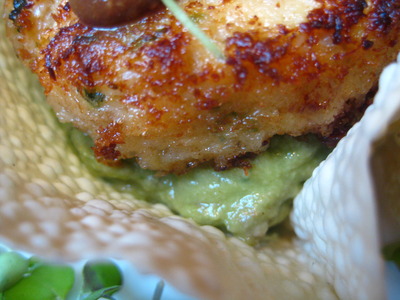 I wasn’t sure how to take this as an Indian dish.  Again, perhaps it’s a misconception on my part, but it didn’t seem very Indian to me. 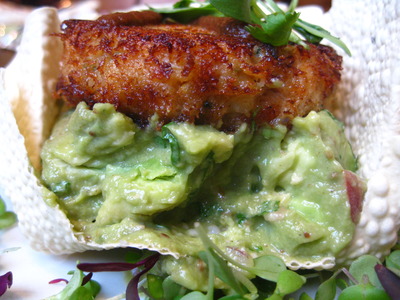 However, as I ate the dish, I marveled at how well the flavors mixed together.  The thin crisp crack of the pappadum with the fatty creaminess of the guacamole, and the powerful burst of crabcake – and it was all crabmeat, hardly any filler – was absolutely wonderful.  I savored each bite and only grudgingly shared a small bite with BBE (thankfully he is neither a fan of crab nor avocado, so he ate the bite without much remark nor desire for more), and just enjoyed immensely the way it all came together.  I was truly sad when I looked up from inhaling the plate to discover there was no more left in front of me. 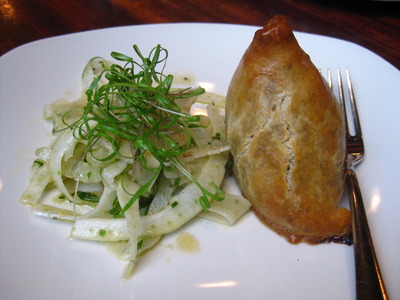 BBE chose the duck samosa for his appetizer. 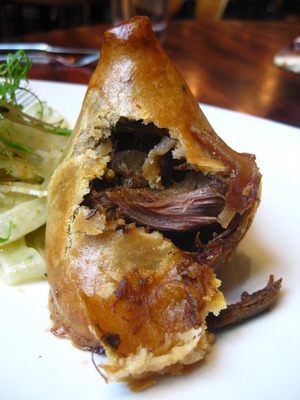 I was allowed to poke a hole in it and eat some of the duck.  I tried a bite, but got bored and returned my attention to my crabcake.  BBE, however, said decisively that it was rich, dense with duck, no stringiness or gaminess of which to speak. 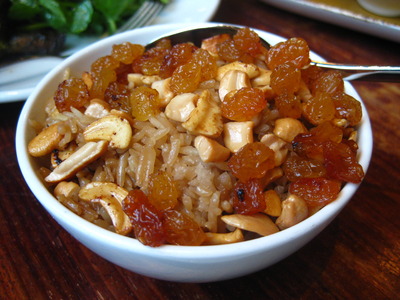 And then it was time for our main course.  Having ordered what we both presumed to be a saucy dish, I’d suggested ordering the black cumin pilaf, for soaking up the sauce that was to come.  The rice was laden with sultanas, cashews, and really pretty. 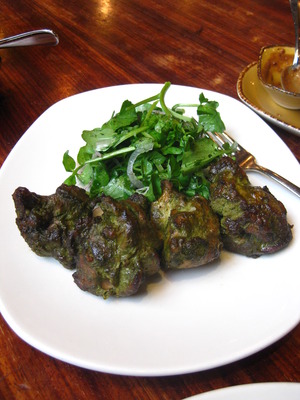 …and this was placed in front of us.  Our chicken tikka. 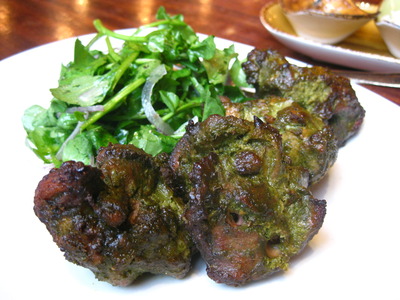 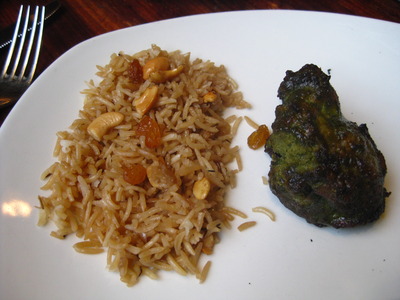 I initially took some rice and a piece of chicken, before BBE reminded me that there was more on the plate. 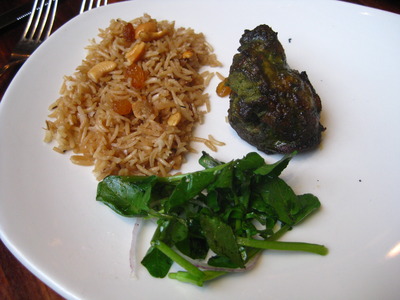 Right, some green stuff.  The rice was lovely; I really enjoy dried fruits in my rice when mixed with saucy curries.  And the chicken, though it wasn’t quite what we were expecting, was tender and flavorful… just not saucy.  The greens were peppery and a nice contrast to the rest of the dish.  We both liked this dish, though we agreed that had we known there was no sauce with the chicken, we’d just as soon not ordered the rice. 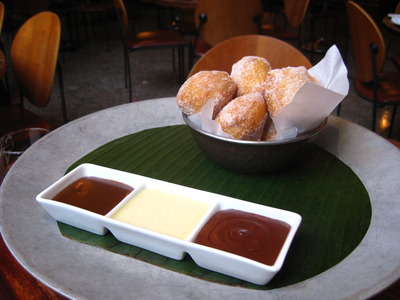 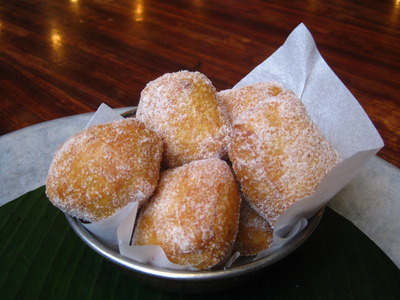 Still hot, with a nice crunchy dusting of sugar. 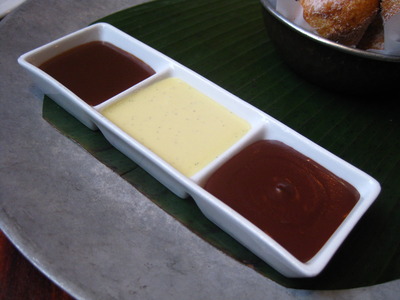 But even better: trio of dipping sauce; bittersweet chocolate, vanilla, and caramel.  One guess which I commandeered?  If you guessed caramel, you guessed right.  The chocolate was too bitter for me (I like mine dark, but not that bitter), and the vanilla was fine, but the caramel stole my heart.  The doughnut holes were excellently fried dough; dipped into the caramel, OM nom NOM.

(And because it’s a Danny Meyer establishment, you want to know about the service: it was good, we switched servers twice, but it was an awkward between-lunch-and-dinner-time.  Our first server didn’t know what he was doing or what he was talking about, so he may have been training – a bit odd since the place is closing in a few weeks; our second one was excellent; and our third was friendly, but we had her for only a few minutes at most, so I can’t really say.)

Yvo says: While I quite enjoyed the entire meal, even with its missteps (in my eyes; perhaps more like misunderstandings?), I’ll say again: this didn’t feel or taste like an Indian meal.  Perhaps that’s a matter of perception, but I didn’t come away with the sense that I just ate a fantastic Indian meal, just that I just ate a really good meal, some dishes with Indian influences.  Which isn’t to say that’s a bad thing, but for the premium price you pay… I don’t know that’s what I want.  I’m just tossing out ideas why Tabla is closing… and price is definitely one of them.  I’ll dream about that crabcake dish for a while to come, and I’ve already learned how to make that Tablatini… but it’s with a mixture of relief and sadness in my heart that Tabla will close, leaving me confused – much like how I view the menu.  Confused about what it is – Indian, or American?  American, or Indian?  How about American with Indian influences?
recommended, not that it matters; closes on 12/30/10