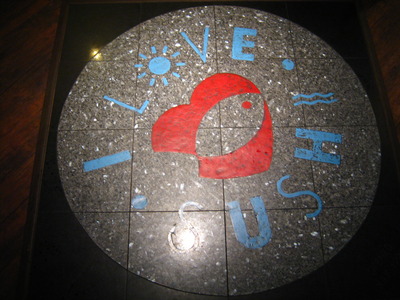 With a name like “I Love Sushi” I admit I was pretty skeptical as to the deliciousness of this place.  But my friend HB said it was so good and she liked it so much, she’d visited more than once (I’m not sure if it was the same trip out there, or if it was two separate trips to Seattle).  So I figured I had to give the place an open-minded shot… even though it took a very long cab ride to get there 😉 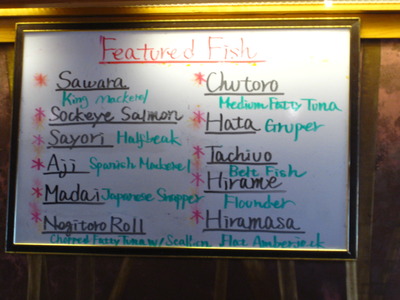 I chose the Lake Union location for its proximity to where I was staying – much closer than the other locations.  A list was posted with what’s ‘featured’ for the day – I’m going to take that as what’s freshest… 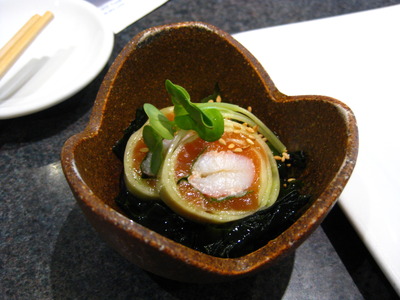 I chose to sit at the bar, enjoying the interaction between chef and customer at the bar… and this amuse was served to me.  A big chunk of crab meat wrapped with salmon, then cucumber, atop a bed of seaweed.  I was excited already – off to a great start. 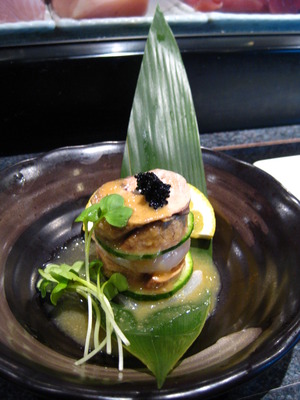 Having read about monkfish liver being the foie gras of the sea, I really wanted to try it.  An appetizer was listed as being monkfish liver, scallops, caviar, in a miso reduction, 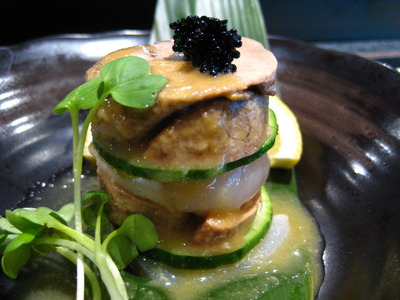 and was abso-fraggin’-lutely delicious.  Creamy, fatty, delicious…. the citrus in the sauce really played nicely against the monkfish liver.  I’ve already been looking for monkfish liver at other places since then, but thusfar have been unsuccessful.  I will have you again, my delicious!  🙂  Though not quite the same 🙁 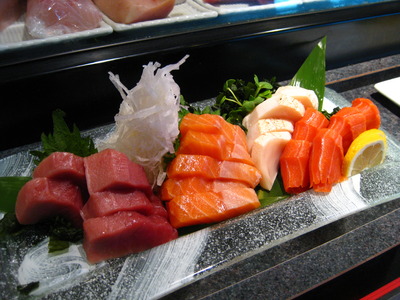 I wanted a decent variety, so I opted for sashimi… though later, seeing other people ordering, I probably could have offered the chef more creative license.  However, he was very friendly and knowledgeable.  I chose, from left to right, tuna, King salmon, escolar (like white tuna, but almost better!), and sockeye salmon.  The tuna was pretty standard; the King salmon, tasty.  Escolar was, as I’d hoped, even better than at Hana, very buttery, creamy, and tasting faintly of the ocean… mmm.

But the real surprise was the sockeye salmon.  I’d ordered two kinds of salmon because I knew instinctively that one was the salmon I know and love back home, and I wanted to compare firsthand to the other kind.  Sockeye is the kind of salmon I don’t get back home (or perhaps I don’t order it here).  I’ve had it smoked, but I’ve never had it raw like this.  And oh my stars.  Slightly lemony (I realize in the picture it’s up against a lemon slice, but I assure you that even the slices in the back had a faintly lemon taste to them) and this dense meaty texture to it… heavenly.  So… good.  I tried looking for some at Pike Place Market to ship home, but t’was not to be. 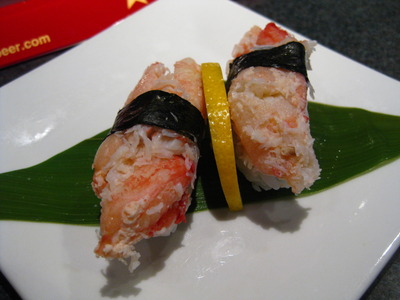 Going on a hunch from my experience at Hana, I also ordered crab nigiri.  Yup – fresh, real crab.  I decided that’s just how it was in Seattle – krab? not really their thing.  I respect that.  My stomach loves it.  Swoon. 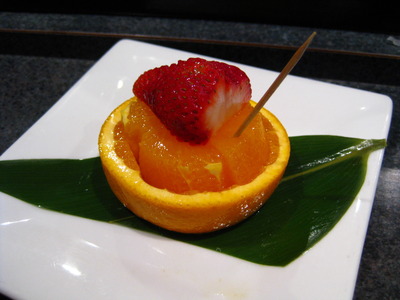 And finally, the check came, something reasonable, and I patted my belly and sat back.  Lovely, wonderful sushi, from a lovely, wonderful place.  This is why I trust my friends to not steer me wrong…

Yvo says: The sashimi was super fresh and I’m sure, had I bothered to explore the cooked foods menu, I’d have found even more delightlful goodies to partake in, but it was just me and sooo hard to eat so much when it’s just one person.  I would totally go back the next time I’m in Seattle (and yes, there will be a next time, since there were so many places I had to pass over due to time constraints, boo.
Highly recommended