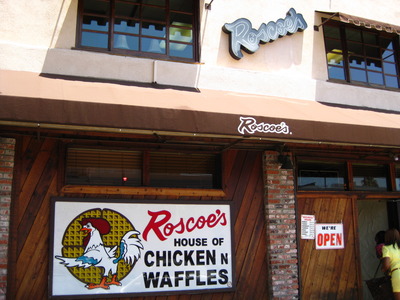 I have had limited experience with chicken-n-waffles – that singular experience being once, a friend ordered it in front of me, but I didn’t really partake.  I just watched in awe as the entire platter was destroyed in a matter of moments.  Suh-wee!  I have, however, heard of Roscoe’s before as amazing chicken & waffles – most notably in the movie “Be Cool” when Dwayne “The Rock” Johnson (yes, of “CAN YOU SMELL WHAT THE ROCK IS COOKING!!!” fame) says he loves to get the drumsticks from Roscoe’s, because the meat is so fallin’ off the bone tender, that you can put the entire thing in your mouth and just suck the meat off.

Vince Vaughn “appropriately” responds with something homophobic (Dwayne Johnson’s character is unapologetically and comfortably gay in the movie, and works for an equally unapologetic homophobe, Vince Vaughn), we laugh, everyone moves on.  Unless you’re me: you file away this bit of information about amazing fried chicken in LA, a city you never planned to visit in the first place, and remember that The Rock also comments about which location to visit.  A comment that haunts you when, 5 years later, you wind up visiting, and you can’t freakin’ figure out which location he meant.  So you go to the original because you can’t go wrong with the original, right?  Right??? 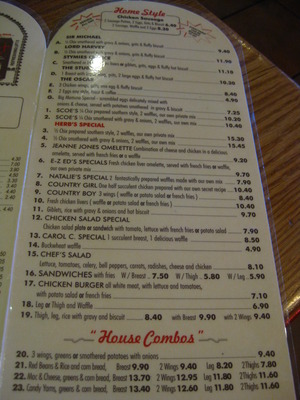 The menu – I knew it was unlikely I’d have time to return on this trip, so I decided to go a little nuts with my order. 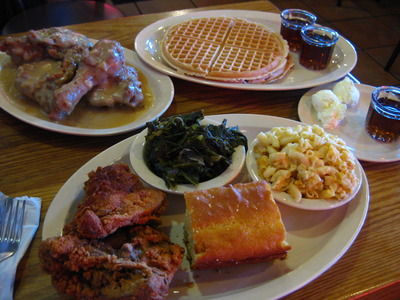 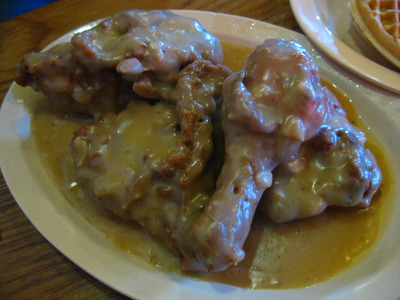 Initially, I had thought the gravy might defeat the purpose of good fried chicken, softening the crispy exterior.  Well, I’ll discuss this in a little bit. 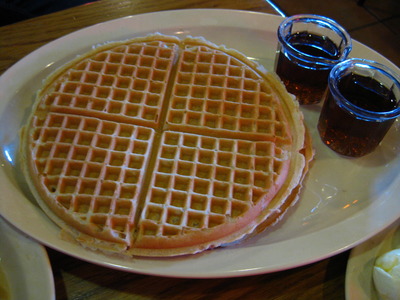 Though I’ve never been a huge fan of waffles, this was pretty good – non-Belgian-style, which is to what I’m accustomed, it was thin, almost crispy, with a nice chew to it.  It wasn’t hard, it was definitely soft enough to pick up with my hands, rip a piece off, and wrap around each piece of chicken, if I so chose. 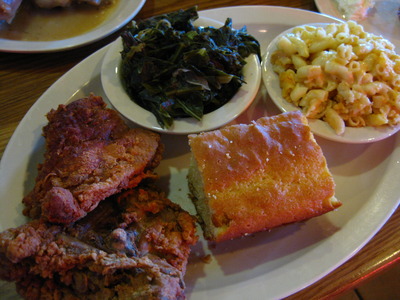 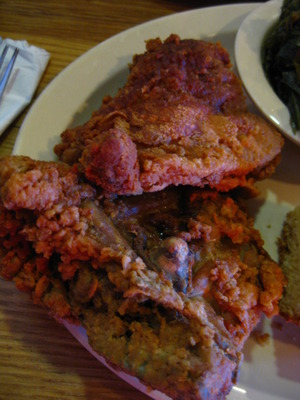 The two thighs were perfectly cooked, with a crisp exterior, and a deliciously moist interior.  As I mentioned earlier, I was afraid that being smothered in gravy would ruin the crisp exterior.  This was not true at all, however, I just kept stuffing that gravy smothered chicken in my mouth and it remained juicy, moist, delicious, and crispy skinned.  The “plain” chicken was good, too, but I found myself dipping pieces of it into the gravy eagerly and happily.  Next time, I might even get gravy on the side, just so I can slowly soak each piece in that glorious goodness the gravy was.  Delicious.  With a piece of waffle, a little dash of syrup?  Just another step closer to the grave, and another bite of heaven… 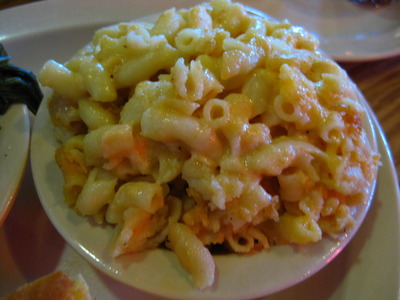 The mac & cheese was nothing to write home over, it was cheesy pasta but a little gummy, not to my adoration.  I don’t care.  If I go back, it won’t be for the mac & cheese, is all I’m saying. 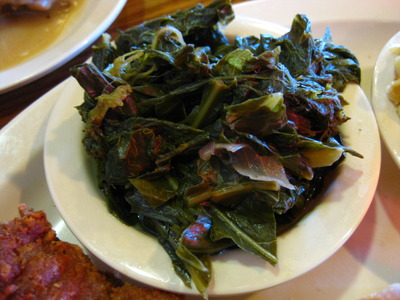 The greens were alright, cooked properly and well-flavored.  But the real stars of the show here are, plain and simple, the fried chicken and the gravy.  Even the waffles, which I enjoyed, could be overlooked in favor of amazing fried chicken covered in this delicious gravy.  Oh my stars.  What I would give to have some more of that right now.

Yvo says: Ironically, as I researched the place and its origins, it turns out I travelled across the country when Mr. Hudson, the founder of Roscoe’s, actually is a New York native.  In any case, I do not see any viable reason for anyone who visits LA to not visit Roscoe’s at least once – and if you live in LA, you should have gone at least once in your life!  It’s good stuff (unless you hate fried chicken and/or soul food, in which case, I guess not).  But seriously, try it.  YUM!!!
highly recommended

« Return to Bento… and a Giveaway!!!
Tuesdays with TT: Wan’s going away dinner »