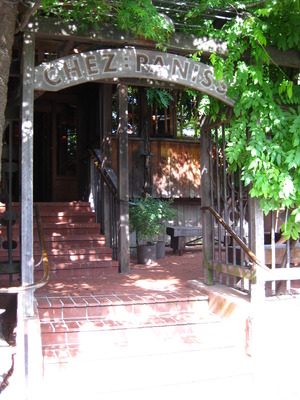 After our dinner at The Slanted Door, DP and I talked about my further plans while in the Bay Area.  When she found out that I was going to be dining alone the next day in Oakland after the baseball game, she insisted on joining me for my reservations at Chez Panisse.  I hadn’t been much looking forward to dining alone there in any case, so I agreed happily and met her there the next day.  The exterior was camouflaged almost with the greenery hanging down, but the place looks so relaxing and chill from the outside! 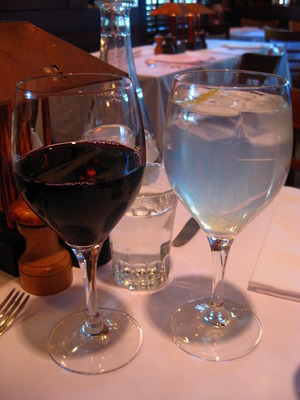 I wasted no time in exploring my newfound love of elderflower and ordered the D’Arbo fruit soda on the menu – they had a lot of flavors but elderflower obviously jumped out at me and I had to have it.  I have been casually searching for this in NYC, but haven’t found it yet – anyone know where I can get it?  I loved this.  Lightly effervescent, lightly sweet, and perfect.  I seriously wish I could have a steady supplier in NYC… mmm.  It wasn’t that expensive, either, considering that apple juice and orange juice were around $5 a glass and this was $3.75.  I don’t know what DP had – wine obviously – because I wasn’t paying attention and didn’t try it. 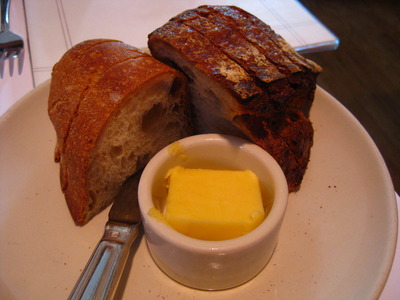 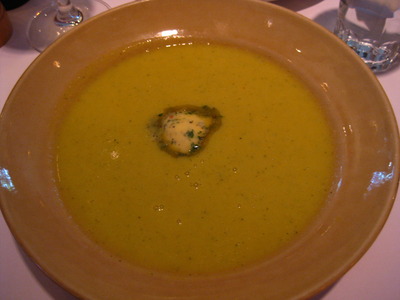 DP didn’t care much about the appetizer menu, so I chose both apps (yes DP is an awesome friend, but she also likes to eat whatever I do).  The first one that came was corn and zucchini soup with herb butter ($8).  Though the soup looks creamy in the photo, I assure you that it was light and super fresh tasting, like someone just that moment when we ordered reached outside and plucked each item from the fields, then made this amazingly vegetable-sweet soup, just for me.  Yes, you could say I liked this… but I wasn’t too sure about that dollop of herb butter in the center.  It was tasty – no question about that – but it wasn’t necessary.  It just made the dish heavier, not quite as light… I avoided that scoop as best I could. 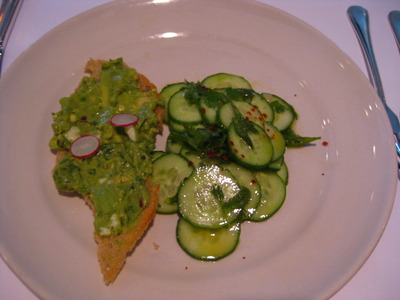 The next appetizer ordered was avocado and egg toasts with cucumber salad and cilantro ($9.50).  Again, every ingredient was super light and fresh – the cucumbers lightly dressed in olive oil and cilantro, each ingredient allowed to shine in its purest form.  The toasts were crisp, slathered in avocado and chopped egg.  Creaminess against a very hard crisp melba-toast-like-item… nom.  While I liked this, since I’d commandeered the soup, DP took over and ate the majority of this dish, so I’d say she liked it at least as much as I liked the soup! 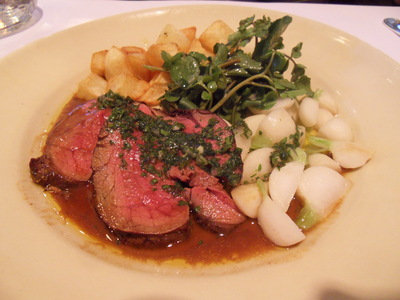 We discussed the menu briefly and discovered that nothing was quite that unique or unusual, but going in, I’d known that it was going to be more about the ingredients than about who’s cooking what in a 140 degree bath of circulating water or carbonating things that aren’t normally carbonated.  Simplicity in deliciousness, a concept with which I fully agree in my own home cooking.  So DP ordered what any good red blooded American girl would, given the choices: grilled grass-fed beef tenderloin roast with little turnips, crispy potatoes, and watercress ($28).  It looks amazing, and trying a piece of the meat proved that the meat was indeed succulent, tender, and prepared properly, showcasing each ingredient to its fullest potential with minimal preparation.

*My camera chose here to choke and die because I stupidly didn’t charge it, despite having taken well over 300 pictures by this point in the trip – perhaps more.  Thankfully, DP travels with camera, and happily took the above and next few pics for me… thus the difference in quality. 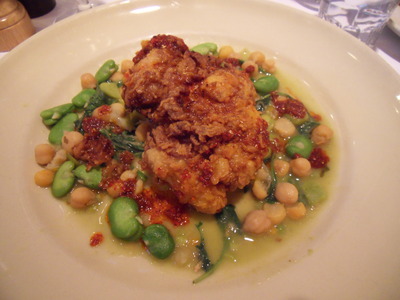 And this red blooded American girl broke her personal near-cardinal rule of eating out: I ordered chicken – I almost never order chicken when I eat out.  But not just any chicken!  It was fried Soul Food Farm chicken with fava beans, chickpeas, and sweet and hot chiles ($24).  The bottom bunch of stuff was very tasty – properly seasoned and simply prepared delicious vegetables (that I mostly like).  But that piece of chicken?  Holy! crisp skin, juicy meat, and seasoned as though I had personally directed how much salt my tongue likes, how much pepper, and everything.  This was beyond chicken, people.  This was… amazing.  It is rare that chicken can wow me – the meat itself tends towards the less-than-exciting – but WOW.  I had no regrets as I ate this. 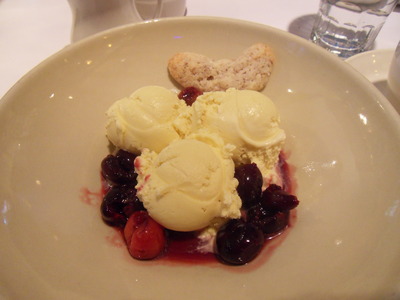 Though I was pretty full by this time, I chose to get toasted almond ice cream with roasted Bing cherries ($8.50).  Again, no regrets – this was delicious, with a lightly sweet, slightly roasted taste to the ice cream, and creamy-sweet cherries that had been roasted to perfectly delicious, oozing its own syrup.  Very happy girl. 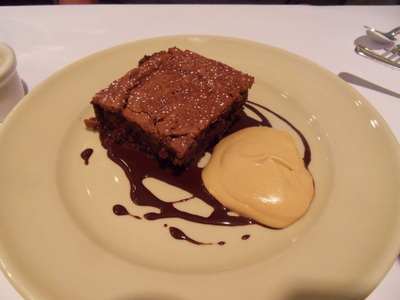 DP ordered the bittersweet chocolate pave with caramel cream ($9.50).  She must’ve liked it because I don’t remember eating a single bite and just hearing “MMmmmmm” ensue from her side of the table.  It certainly looks delicious! 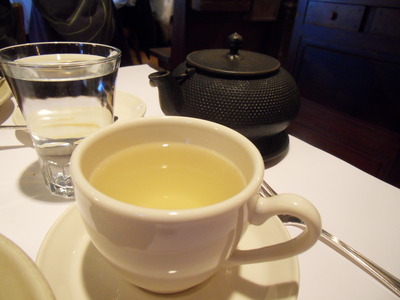 One final treat for me. solidifying my new obsession with elderflower: a pot of organic tea with elderflower nectar.  Lightly fragrant, slightly sweet, absolutely perfect way to end our fabulously fresh and delicious meal.

Note: I don’t know much, if anything about Alice Waters.  I mostly know that in the 10 or so times I’ve been to San Francisco, it seems people always ask me if I’ve eaten at Chez Panisse and then tell me I should, because it’s delicious and the focus is on fresh food.  Now that I’ve eaten there, I can attest that yes, the dishes speak volumes about the way she must feel about food: minimal preparation, let natural flavors shine through because natural food is meant to taste amazing, and it does.  No need to mask it with lots of crap to make it taste good.  However, in the past year or two, her name has surfaced a few times in the context of the local/organic and/or locavore movement.  Which honestly doesn’t mean that much to me; while I am part of a CSA (and a damn good one at that), I don’t preach about these values to people.  I’m told that Ms. Waters believes everyone should buy and eat local/organic; it’s a nice, pretty concept tied in a bow.  I’m not entirely sure what she thinks about the economic downturn and its effect on people’s wallets and as a result, their diets.  The food budget is stricter than ever now, especially for those who were never well-off but simply getting by.  I just glanced at Fresh Direct’s website and boneless skinless chicken breast is $3.49/lb or $10.99/lb for organic.  You read that right – over $7 extra for organic.  I’m not saying I agree with the practices behind non-organic farming.  I’m simply saying that as a broke college student, I would not buy organic (actually I’d just not buy meat, but that’s me).  If I had to think about feeding a whole family of 4 or 5 on a normal budget, I probably wouldn’t buy it either; that’s added cost for something I couldn’t easily justify to myself.  If you can buy local and/or organic, then yes, it’s good to do so.  But I refuse to demonize anyone who can’t or won’t, for whatever reason, simply because what a person eats is so personal, it’s almost like asking someone “Hey so how much money do you make?”  It just is none of my business, and it pains me to see people demonized for eating meat, or eating meat that isn’t grass fed, or not organic, or not local, or… It’s a personal choice.  Leave it at that.  (Yes, I’m under the impression that Ms. Waters made a speech condemning those of us who aren’t more conscious of where our food comes from, and blasted those who don’t eat local and organic.  I could be wrong.  If I am, I apologize and withdraw my statements about her, but my opinion remains the same.)

Yvo says: Food politics aside, I really enjoyed our meal at Chez Panisse, and DP glowed happily.  (Despite living somewhat in the area, she’d never been.)  We were both more than satisfied with our respective dishes and really appreciated how everything was allowed to really shine in a natural preparation.  Not one thing disappointed, which in and of itself is amazing for such a hyped place.  I definitely recommend trying this place out if you can manage to make your way there – and make a reservation for the cafe, since the downstairs menu seems limited to prix fixe/tasting menu only, and you want to be able to order whatever you want… and however much you want!
highly recommended