Believe it or not, I have never been to Dim Sum before. Growing up in the Jersey suburbs, my family was not the most adventurous of eaters. CT made it her priority for us to go ASAP. She prefers going with her good friend Wan who speaks Chinese so she can get us the best food at the best restaurant. Wan is off to graduate school in London soon, so we were running out of time before she left. CT picked one of her favorite places, Jing Fong Dim Sum on Elizabeth Street aka the place with the big escalators. After waiting 15-20 for a table, we proceeded up the escalator. The place is enormous. It can seat a couple hundred people at one time. 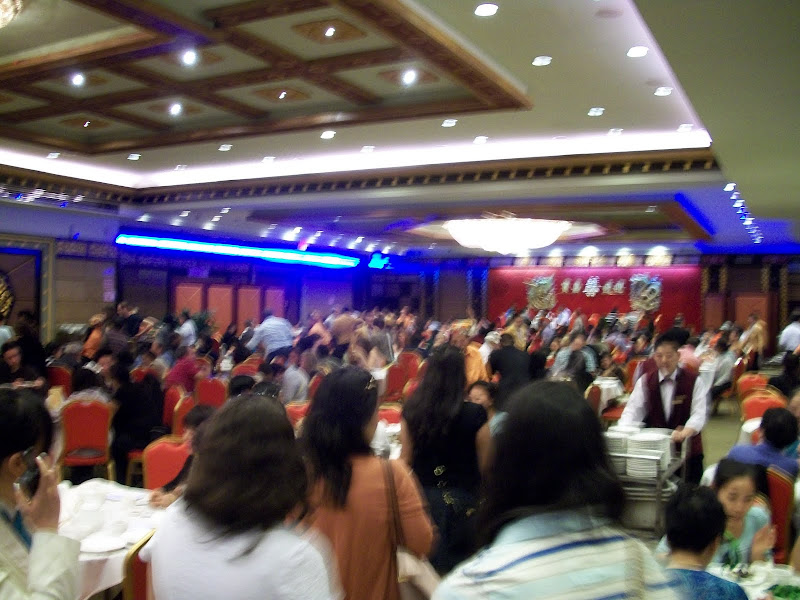 After sitting down, the food comes immediately, since it is already prepared and being passed on the traditional dim sum carts. Simply point at what you want and the server will mark your card and present you with the item. Talk about instant gratification. We let Wan go nuts and choose what she felt was the best items. 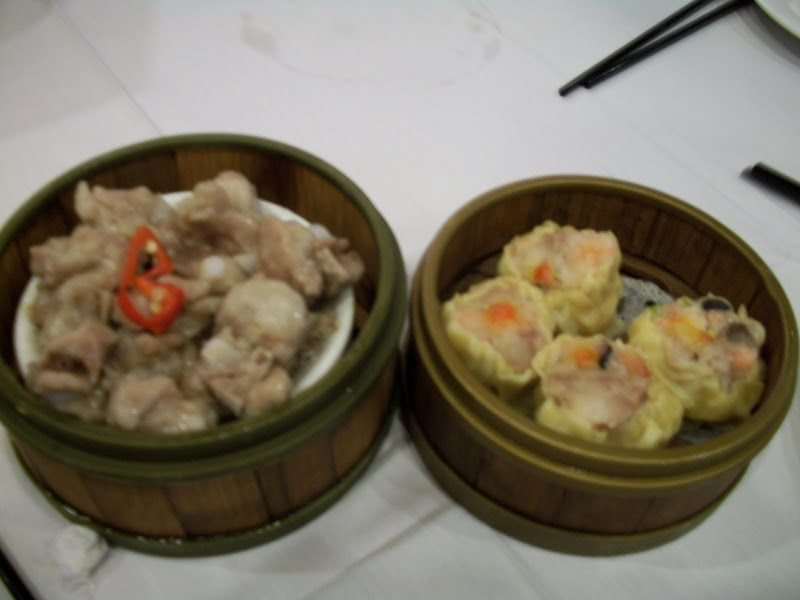 On the left- steamed pork ribs with taro roots, garlic, and red pepper. Very tasty, somewhat gelatinous from the cartilage.

On the right- seafood and pork shu-mai. Good seafood flavor. 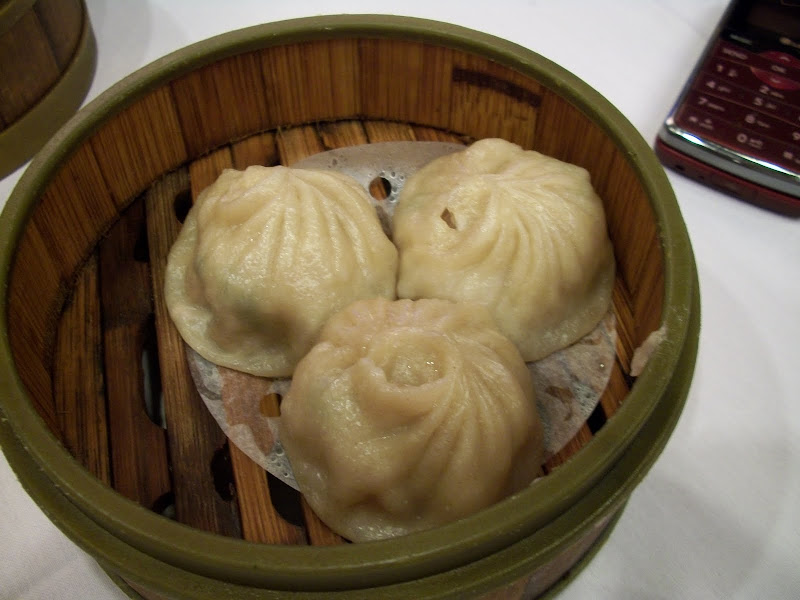 Pork buns. They look like soup dumplings, but alas they were not. These were just ok. 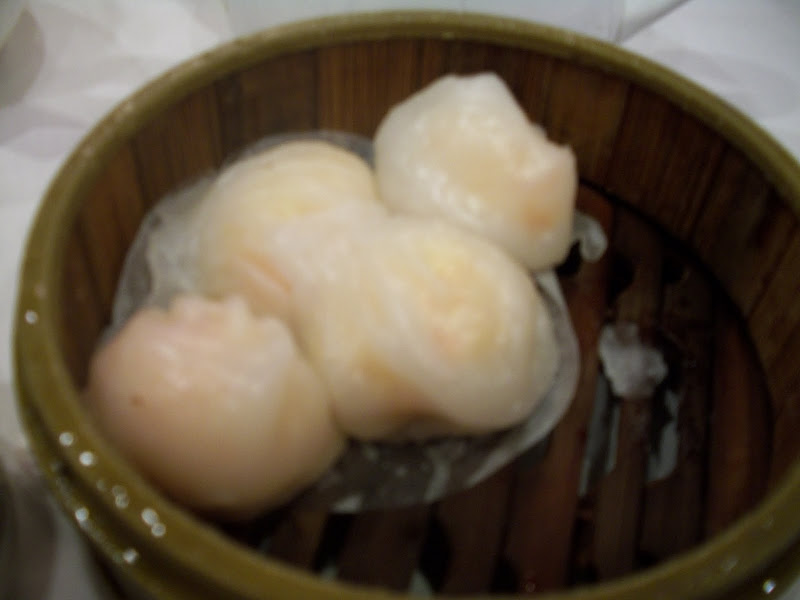 Clear shrimp dumpling – in Chinese it’s sometimes called “crystal dumpling” because of its clear wrap & chewy texture. The wrapper was a fail on this because it became too sticky so the dumpling fell apart when grabbing it with chopsticks. The shrimp inside was tasty though. 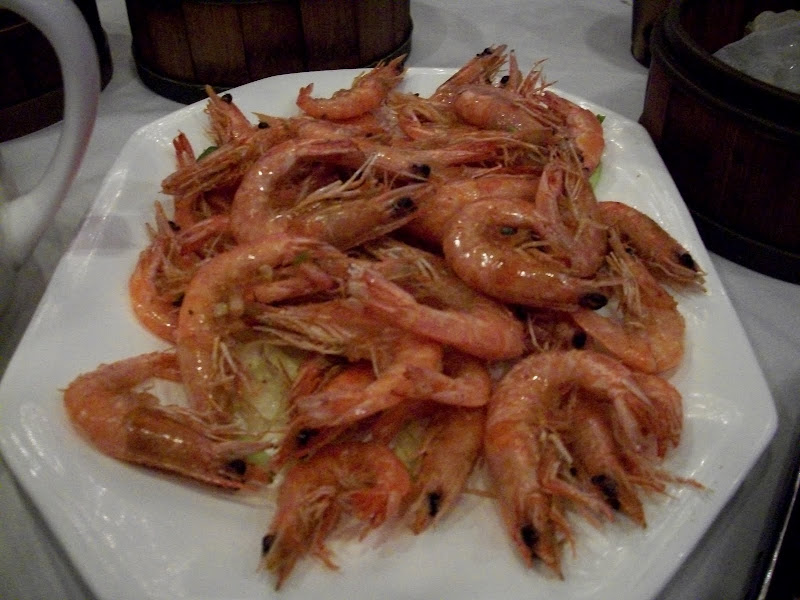 Fried shrimp! These were very good. I ate these like potato chips. Heads, shells, and all! 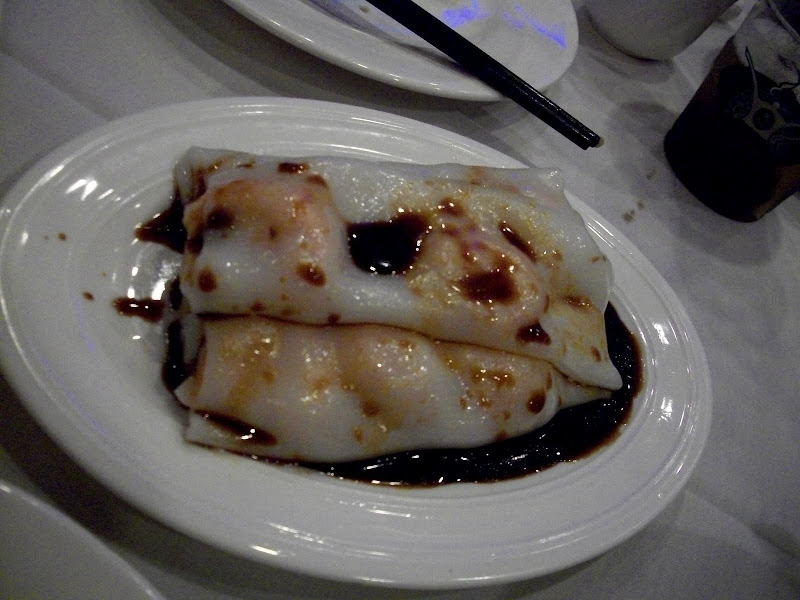 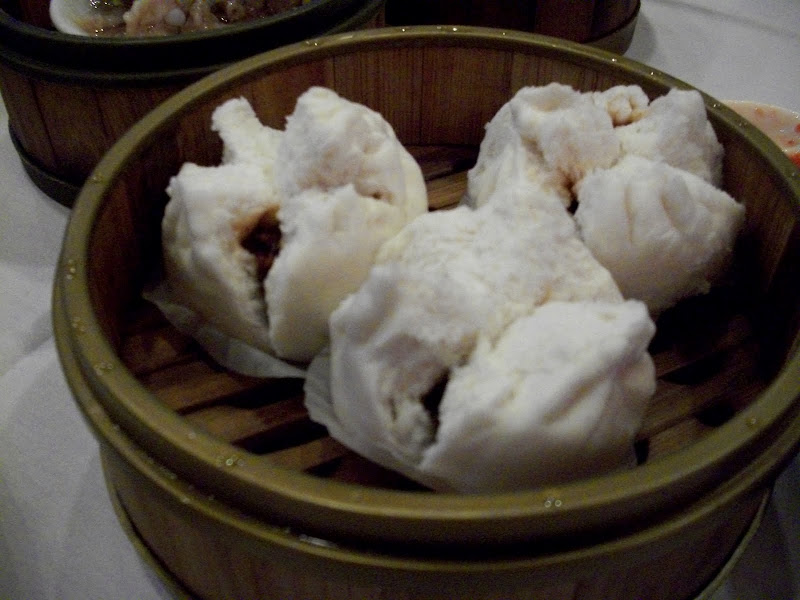 Roast pork buns. MMMMM. These were probably the best roast buns I have ever had. Very fresh and the meat inside was still pretty hot. 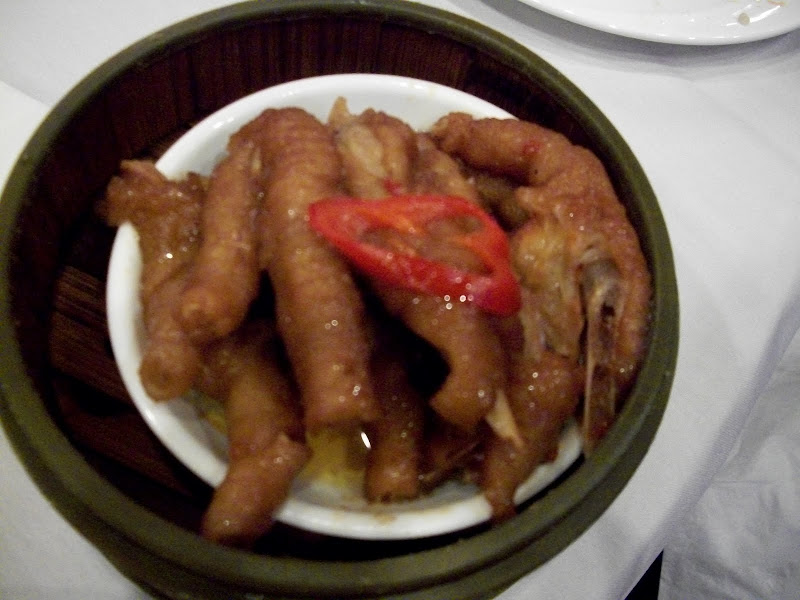 Chicken feet. The one item I knew I wanted to get before arriving. Zimmern and Bourdain eat them all the time, so I really wanted to try them. They were very tasty. Very similar to the buffalo wings you would get at the bar, but a little harder to eat with less meat and more skin. 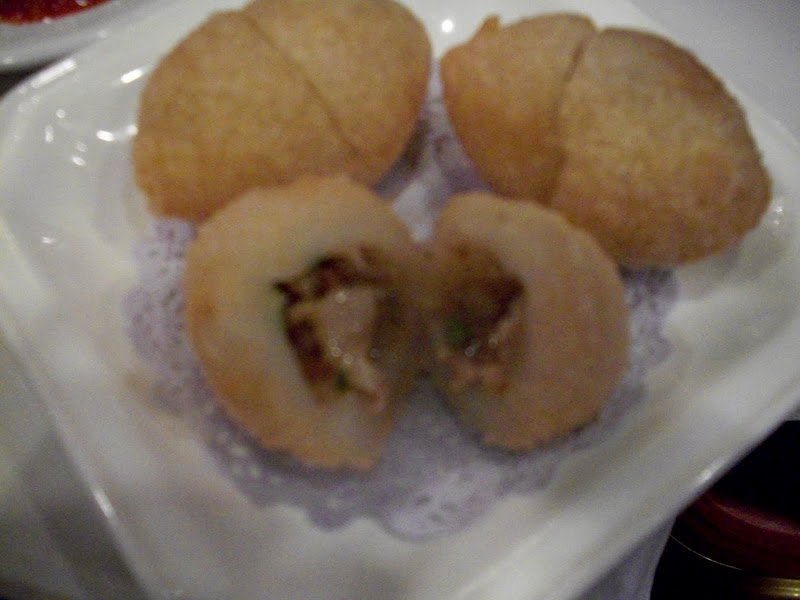 Savory Dumpling- fried sticky rice paste/dough(?) with pork stuffing. These were good in that they were sweet and savory at the same time.
Yvo’s Note: Fried mochi filled with savory ground pork. Growing up, my brother and I called them footballs for their shape and our inability to pronounce the Chinese name (ham sui gok, or ‘salty water triangle’ I think) 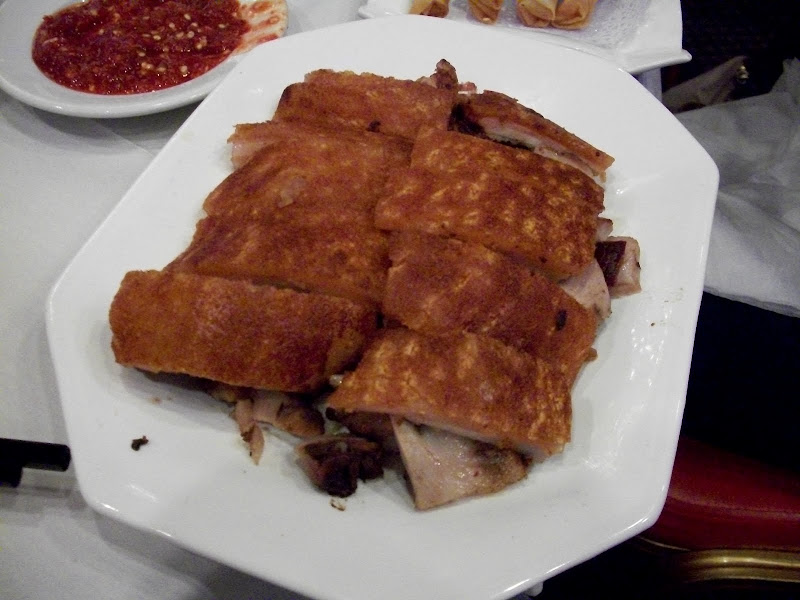 Crispy Duck with Hoison Sauce. I saw this dish and had to have it. It was amazing. The skin was so crispy! Dipped in hoison was the perfect salty/sweet combination. 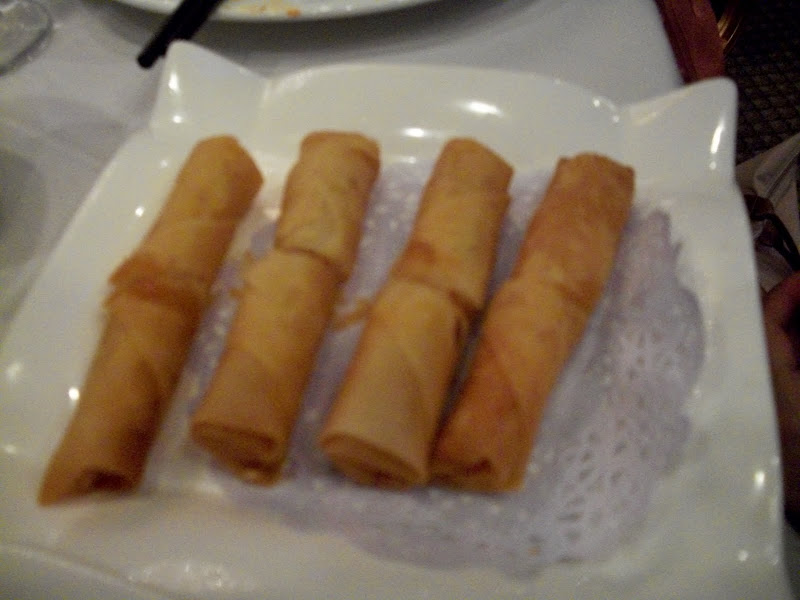 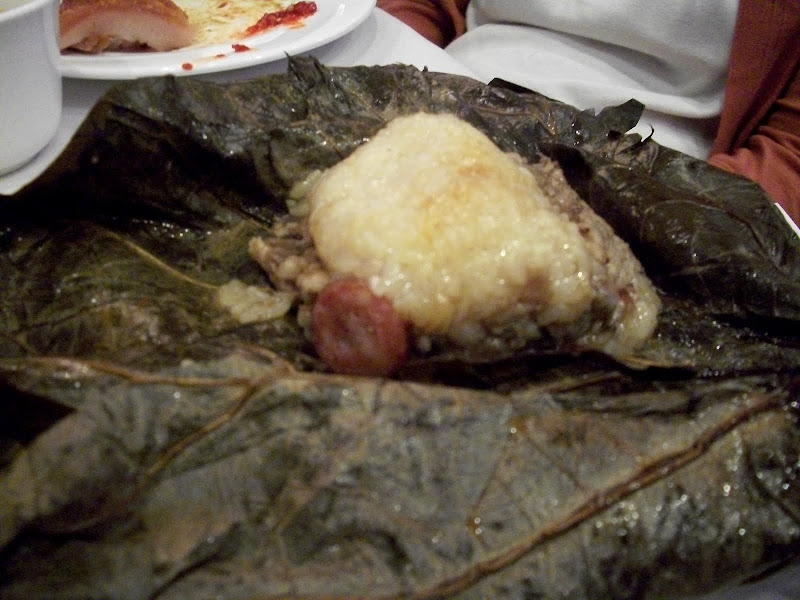 Lotus wrapped sticky rice and chicken, ground pork and Chinese sausage. CT says this dish is mandatory. It was very tasty. Lots of different flavors all mushed together.

For the 5 of us, all of this food was $15 including tax and tip. Apparently that is considered expensive for dim sum. I thought it was a great deal. Navigating Chinatown on the weekend can be a little hairy, but well worth it for this. It was a great meal and look forward to returning again. Thanks Wan!