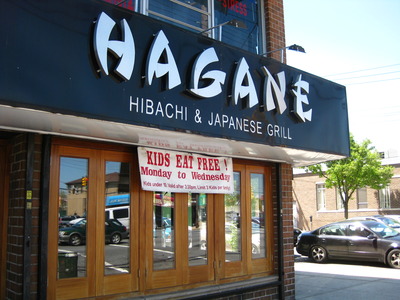 Recently, on a slow Friday, I headed over to the BF’s to hang out.  With school and work (food writing) being so intensely busy lately, I haven’t had much time to spend with him and I really missed him.  He decided he wanted Japanese food; I told him we should try the new place that had popped up on Cross Bay Boulevard.  I wanted sushi, but to my surprise, when we walked in, it was a hibachi place!  I was surprised for a number of reasons; one being I was already surprised that a small Japanese restaurant had opened so close to another one (which I’ve yet to review, but we go to quite frequently), and another being, well, Danny’s Szechuan Garden has been there for quite a while, and… people in Howard Beach can be pretty territorial.  Seems like a recipe for disaster… but in any case, we went in, and initially I was hesitant when they told us there was no sushi, but I decided to stick around for the heck of it and give it another go.  Afterall, according to that post, it’s been 2.5 years since I’ve had hibachi, and probably about the same for BF… 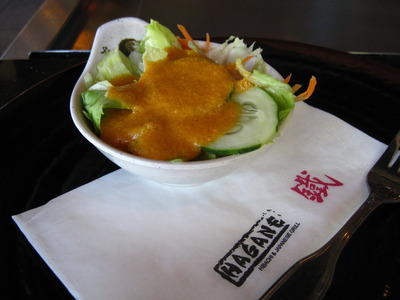 Plus the lunch specials were cheap.  The most expensive lunch special was filet mignon, $12.95, which BF ordered (that’s what he likes at hibachi).  The cheapest one, vegetable, was $7.95; chicken is $8.95 and steak, shrimp, salmon, scallops or tuna all clock in at $9.95.  For that, you get soup OR salad, noodles, vegetables, and white rice.  $1.25 extra for hibachi fried rice; this is valid from 11:30am-3:30pm, Monday-Saturday.  Honestly?  That’s a pretty kick-ass deal for hibachi, I think. 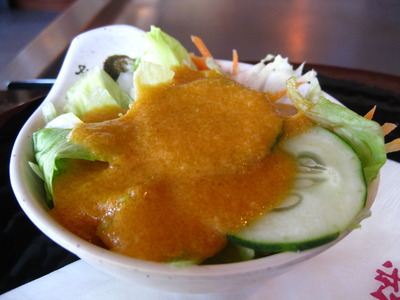 We both got salads… the dressing was average, but WAY TOO MUCH on this little bit of salad.  I seem to have this problem a lot at Japanese places, though… way too much dressing for a teensy bit of salad.  Eek. 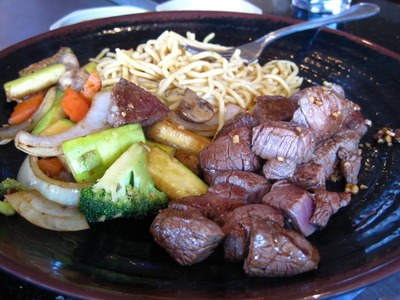 I almost wanted to tell the chef to not bother with the show, but I felt bad.  We were two customers in a nearly-completely-empty restaurant (on a Friday afternoon; it’s true that the area isn’t really conducive to a mad lunch rush, but there should still be people in there!), and the other table(s) were all regular customers.  We were the only two even seated at the hibachi area, so we politely watched… I laughed at the jokes (which I won’t ruin for those of you who haven’t had the pleasure of watching the corny display, cuz it’s cute and fun) since it’d been so long, and it was good fun.  Not a big deal at all to pay attention for a few minutes, since we were the reason they turned on the hibachi to begin with.  The guy also clearly needed the practice; he was good, but some tricks were a little rusty.  BF and I both enjoyed the display though.  The above is his plate… he also added on the fried rice, while I kept with the white rice.  (There was so much fried rice, the chef gave me some anyway.) 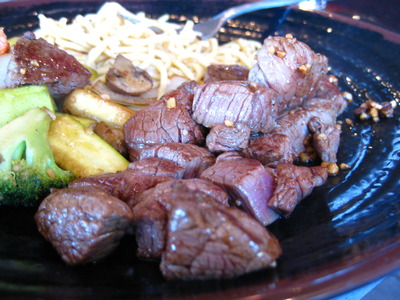 A close up of the steak, which was super, super tender (I tried a few pieces, hehe).  It could have used a bit more marination or flavoring, but BF didn’t seem to mind at all… and remarked to me how cheap it was since there was a decent amount of meat there. 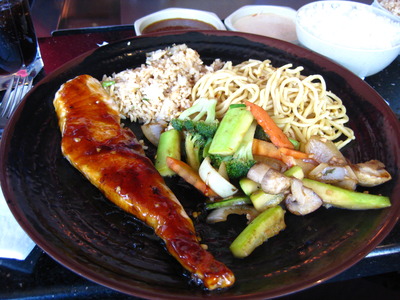 I’d ordered the salmon, curious how it would be cooked.  Several times while it was on the grill, I’d wanted to say “Oh you can take it off now (it looked like it was overcooking)” and I cringed when he tore it accidentally, but hell, let me see how someone else is going to do something before I criticize, right?  Well, he didn’t season it with anything until the very last minute, when he lifted it from the grill briefly with his spatula, took out a squirt bottle, then drowned it in teriyaki/hoisin sauce.  I am pretty sure I turned completely white because BF glanced at me and started cracking up.  I stayed silent but I’ll admit, I was completely horrified.  I mean, the fish looked pretty dry as it was cooked completely at this point, but… to cover that up with an excess of sauce seemed … cruel to my tastebuds.  See it drowning?  (And the small but sufficient scoop of fried rice at the top of my plate?) 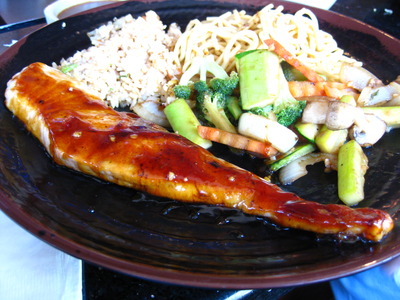 COMPLETELY DROWNED.  But in all fairness, once I started eating it, I was fine with it (and wiping some of the sauce discreetly off to the side, or on the veggies, noodles, rice).  It tasted pretty good, a bit oversweet perhaps, but had a good crunch/sear on the edges, and the fish wasn’t overcooked to dry-hell.  It was cooked a shade more than I eat my salmon, but still in the moist range.  NOM.

Yvo says: Totally welcome addition to the area; this lunch special is hard to pass up.  For under $30, BF and I were well fed, entertained, and with pretty good food.  I would do this again – the lard used for the hibachi was, per usual, a bit much, and my tummy did feel weird later, but BF of the super sensitive stomach was fine.  The veggies were properly cooked (except the carrots, which were nearly raw, and I gave them all to BF), very nommy, and the noodles were good too, if a bit greasy from sitting on the grill.  I liked the place overall, and the very casual atmosphere is perfect for a lunchtime treat.  Also, the menu boasts some interesting offerings (considering the area) – yakitori, noodles in soup, fried ice cream, … Yeah, I’ll be back 🙂
recommended