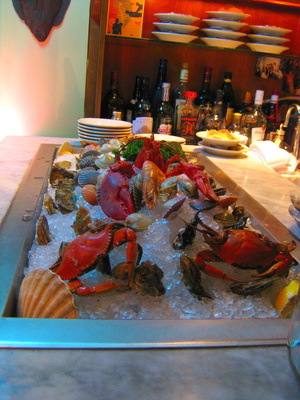 Recently, post-class, I snagged a friend and off we went to Blue Ribbon.  It wasn’t quite late enough to catch the chefs as they came off shift, but it was late enough but still packed, so we sat at the bar right in front of this lovely sight: the yummy seafood display.  We even watched as the guy put together a seafood tower that looked awesome, but alas, two people cannot justify eating all that.  (Well… we could… but I had eaten dinner and just wanted a light bite.) 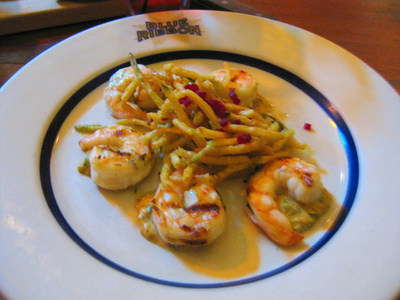 CL opted to get the shrimp remoulade; I believe happy with the choice.  I don’t remember trying any (maybe I did?), but I am not a big fan of shrimp in general, so… 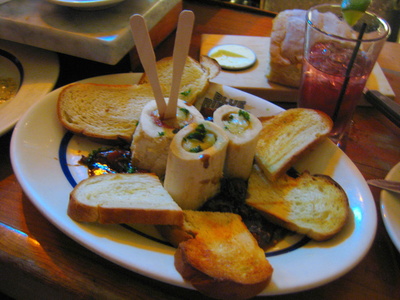 The whole reason I really wanted to go was for the beef marrow appetizer.  OMG.  Oxtail marmalade – I’m not sure you can get beefier flavor than this combined; I spread some of the marrow over a piece of toasted bread, then scooped some of the onion & oxtail marmalade atop it and happily munched myself into bliss.  PURE.  BLISS.  I think a return visit just for this dish is in order… SOON.  (I’m literally drooling a little right now.  Doesn’t help that it’s lunchtime right now, but still.  It was that good.)  Oh, and sprinkled with a bit of crunchy sea salt… transcendental.  But you know, so many people have raved over this dish before, it’s nothing new that I’m saying.  Just go get it.  Because it’s wonderful.  Sigh. 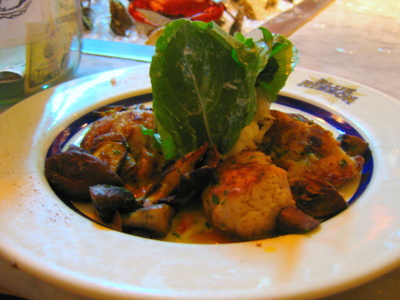 Sweetbreads.  I like sweetbreads, I really do, but I didn’t like these.  Not a good example of sweetbreads, sadface.  Thusfar, the only place I’ve had amazing sweetbreads was at Regate, which is now closed, ugh.  These were also a bit chalky, and just not flavored well.  I was sad because I’ve really enjoyed the vast majority of things I’ve eaten at Blue Ribbon (having only been there twice, that’s pretty easy, though).  I wanted to like this dish, but much of it remained untouched.

Yvo says: Blue Ribbon takes normal dishes to another level.  But it’s also at a price point that might not be the most comfortable for everyone – for the above, plus a few drinks, tax and tip, the total was $91.  I’m not going to say that was expensive (although it was the sweetbreads that boosted the price the most – $30!)… but considering this was just an after school snack, it definitely wasn’t cheap.  Definitely yummy though.
recommended