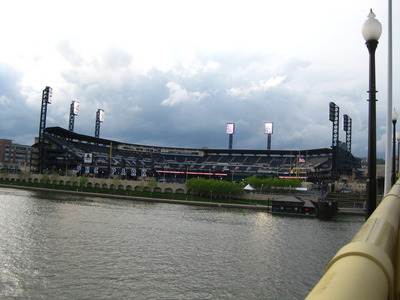 The big reveal… the most solid reason I can offer people who ask why we went to Pittsburgh!  (Even though that’s backwards logic, because Pittsburgh was chosen first, then I said, “Oh my god! We can watch a baseball game while we’re there!” as it is a goal of mine to visit all MLB baseball stadiums at least once in my lifetime and eat the food available at each one…)  We went to a Pirates game!  Scheduling being what it is, we didn’t care who they’d be playing against, although it happened to be the Cincinnati Reds, whom I believe to be their division rivals.

One of the cool things we discovered about Pittsburgh that we didn’t know before (well, we didn’t know a whole lot about Pittsburgh to begin with, which was also the point of the trip – to just look around elsewhere) is that it straddles the Ohio River and there are a million and one bridges crossing back and forth (so if you miss one, just go another few blocks, you can probably hit the next one.  Kind of like Boston but not as sucky.).  One of these bridges, the aptly named 6th Street Bridge, crosses from the theater district on one side directly behind the stadium on the other, so on game days, about 2.5 hours before the game starts, the bridge is closed off to vehicular traffic and you can walk across the bridge to get to the park.  So we parked on the other side (though Parador Inn is actually walking distance to the stadium) and walked over, where I was able to get the above snapshot.  Very pretty park, no? 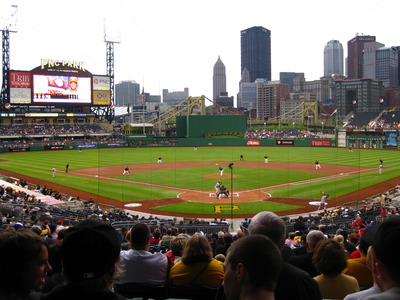 Not only that, but being the kind of girl I am (a planner, I like things set in place months ahead of time; I can be spontaneous, but I like reservations, a set schedule), we purchased tickets months ahead of time.  Above is the view from our seats.  About 15 rows back from directly behind homeplate.  Dude.  Just.  Dude.  I’m not sure I’ll ever sit in those seats at Citi Field or Yankees Stadium, because at Yankees Stadium, I believe they go for $900 a piece (you read that right; $900 each, and currently, those seats are still very much available – a change from last year when you couldn’t get those seats even if you were willing to pay for them).  I don’t know the prices at Citi Field, but it’s probably still out of my budget.

Can I get a HELL YEA?  These seats, before taxes and fees, clocked in at $27 each.  After?  $35.  Yup, it came out to $70 for both of us to go to the game and sit in these friggin’ amazing seats.  AND.  Even better?  It happened that our seats were directly under where the overhang just begun – something I didn’t know when we bought the tickets, but the night of the game, came in handy as it poured for a few innings.  We were safely sheltered from the rain, while the people rows ahead of us had to put up their umbrellas (it was umbrella night).  That was just an unexpected bonus, but I’m not sure I’ll ever get over how damn cheap it was to sit where we sat.  I mean, come on!  Dude!  And it gets better.  (What, you thought I was only going to talk about baseball?  Do you even know me???  Baseball always = food!) 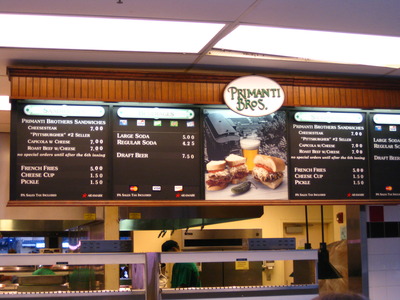 Of course when we walked in, we noticed Primanti Bros. – it was one of the most popular stands, actually, as we saw people chowing down on these at their seats (and lots of half eaten sandwiches underneath the seats…).

Actually, cute story, about two weeks before our trip, I went to Williamsburg with StB to wander around and check out foodie haunts.  We stopped by Marlow’s (the butcher shop), and it just so happened that there was a guy, trimming a big flank steak (I think?), wearing a Pittsburgh Pirates hat.  So I asked him, “Excuse me, are you an actual Pittsburgh Pirates fan, or are you just…” trailing off, because I didn’t want to sound like I was insulting him or anything.  But let’s face it.  The Pirates are a terrible team, so why would anyone wear the hat unless they actually like them?  (Or they like the colors, but the colors are black & yellow, so it’s not like … yeah.)  Anyway, it turned out that Brent moved to NYC recently from Pittsburgh, and though he didn’t seem to have too many suggestions for what to eat at PNC Park, saying “Well, there’s Primanti’s, but you can get that right outside the park for half the price, why get it inside?” he had a ton of suggestions for other stuff, and actually wound up writing up a huge list of places to check out for good food, dive bars, and stuff to do.  We wound up not using any of his food suggestions (sorry!!!), but we did do a lot of the things he recommended.  Thanks again, Brent!!!

Initially, BF was going to get a sandwich from Primanti’s, to see if there was a difference, but the menu selection was severely limited – 3 sandwich choices, and we’d had 2 of them already.  So… 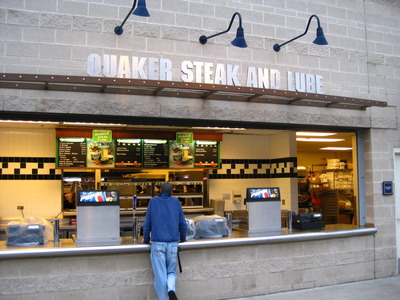 we walked around to the back of Smorgasburgh, an area of the park with picnic tables shaded by umbrellas, a great view of the river, a strong breeze, and… not a single TV.  SERIOUSLY???  Why is there not even a TV or SOMETHING so people enjoying the weather or the scenery or just eating can keep up with the game?  One giant screen like in Taste of New York maybe?  Pretty please? 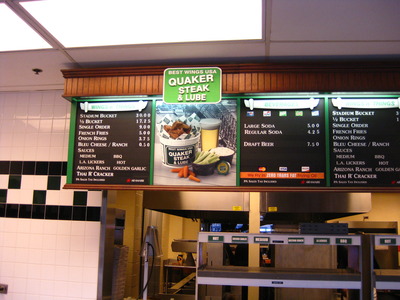 We quickly decided on Quaker Steak & Lube.  You know, I love wings.  BF was game and we ordered quickly from this woman who was so friendly, chatting with us, but clearly could give a crap less about her job as she yelled out orders to people in the front (since we were in the back and the stalls were double ended? the back was EMPTY, no lines whatsoever) and didn’t budge herself. 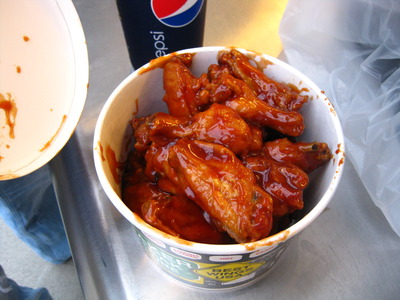 BF surprised me by deciding to order a small bucket (30ish wings) instead of a single order (9-10 wings).  He said just in case it wasn’t enough, and look at the price.  This is usually my job, to buy more of something to reduce the per-item cost while not needing as many as we wind up getting!  We chose BBQ since neither of us is all spicy fans.  Saucy, meaty, pretty good actually, I liked them, though I was hating the wind off the Ohio River, because my hair dipped into my mouth quite a number of times as I ate these.  Grrr.  BF thought they were okay.  One of the things I didn’t like, however, was when I asked “How many blue cheeses does a bucket come with?” and the woman said, “None.”  What???  I had to pay for each one, so I only got three (it could have come with at least one, I mean, come on!), which was definitely not enough in the end.  Oh, and I think we only ate a total of 10 wings… 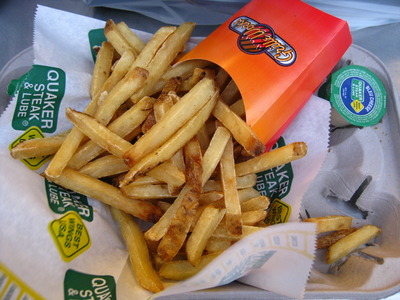 BF also opted to get fries (you can see the blue cheese next to the fries, top right of pic – think it was half ounce?).  Some of these were super crispy and yummy, but got cold fast.  Not bad though, I guess – but not garlic fries or box frites by any stretch of the imagination…

We went back to watching the game (I shoved the leftover fries into the bucket of wings and yes, I wound up eating them eventually, no wasting for me!), as the game progressed scoreless through the rain. 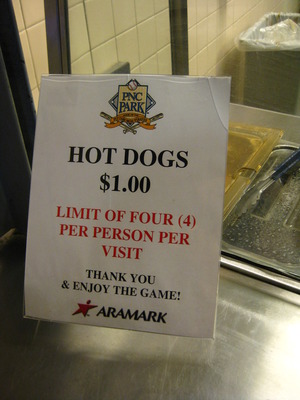 However, I’d heard about Dollar Dog Nights – one of many ballparks around the country’s efforts to keep the recession in mind as people trek out to ballparks to enjoy the game – and had to see if the hot dogs were anything yummy.  I saw a lot of people getting the maximum 4 – not sure if they were eating them all by themselves, but the hot dogs weren’t that big! 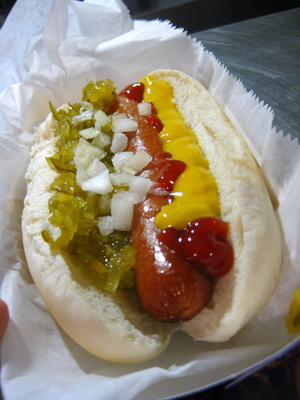 I like my dogs with relish, mustard and ketchup.  It’s one of the few occasions I eat yellow mustard (and the only time my boyfriend will – he’s a ketchup fiend, so it really confused me when he wanted only mustard on his dog, the first time we had hot dogs together).  But they had such a nice toppings area, with raw chopped onion, relish (which the old Yankee Stadium didn’t have – not sure about the new one, ask me again in a few weeks), mustard and ketchup… so I took a little bit of everything.  The verdict?  The dogs had no snap, and were a bit floppy, sadly.  The bun was super fluffy but that equated too much bread; I wound up picking some of it off to eat it to better effect (full disclosure: I often find there to be too much bread for the hot dog in an average bun, though, so that might be a personal preference sort of thing). 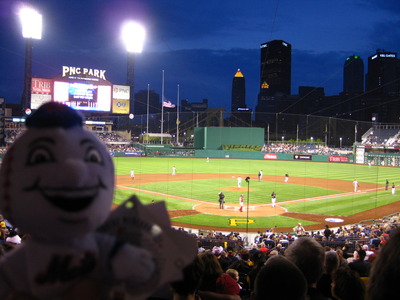 Yvo says: This was actually my first non-New York ballpark – I thought it was really pretty, though SO much smaller than either of the New York ones.  Like, a whole tier or two lower.  As I mentioned before, it doesn’t seem like many people in Pittsburgh even like baseball, which I found to be a little sad, but ah well, I live in a town rooting for the team that is less well-liked by the city – yes, the city plays favorites.  There seems to be a decent food selection – there were also a few stalls offering potatoes (I didn’t understand that?), pierogies, and other items that pay homage to the cities working-class immigrant roots.  Very cool.  There’s even a running of the pierogies race – Green Pierogie sucks btw, like 3 wins to everyone else’s 9-10 wins a piece! – and the whole ballpark feels very family friendly/oriented.  I definitely recommend catching a game if you go to Pittsburgh during baseball season – the seats are not expensive, and there are food options for everyone… and deals.
recommended (though I can’t imagine a ballpark I won’t recommend… that may change as I hit more and more!)