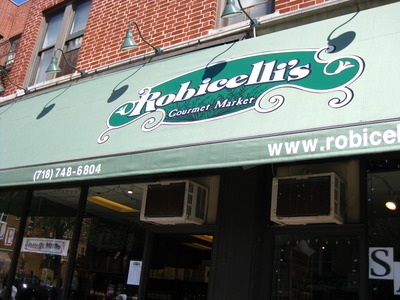 As I mentioned recently, there was some Cupcake Wars and cupcakes to be had down in Bay Ridge!  I snagged the LTS BFF and we headed down… yes, we’re both nuts, 2 hours on the train each way to see about some cupcakes!

It turned out that we were both super glad we had~ before I even get to the cupcakes, I have to reveal – no, wait, I’ll hold off.  Wait, no.  Wait, yes.  Wait… sigh.  You’ll have to wait.  It adds to the suspense. 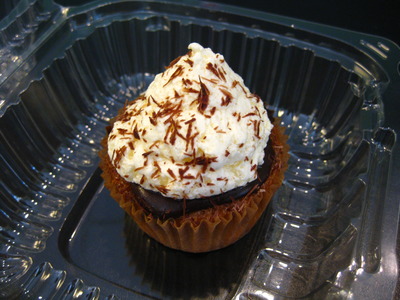 I was incredibly eager to try the tiramisu cupcake, since tiramisu is one of my favorite desserts.  While this cupcake was delicious, it wasn’t my favorite.  That’s probably because I’m somewhat of a purist and prefer tiramisu to be actual tiramisu… but it was still yummy! 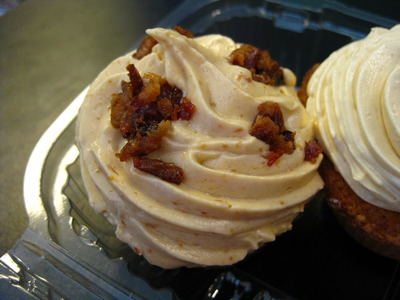 The Elvis cupcake – I’ve heard so much about bacon on cupcakes, I was really excited to try this one.  Salty sweet smoky bacon bits on top, a peanut butter frosting, a banana cupcake base that didn’t fall into the heavy banana bread territory… this cupcake was friggin’ delicious.  The frosting wasn’t the dense kind you usually see on cupcakes – sorry, my cupcake knowledge doesn’t extend that far! I think it’s usually buttercream and these were French cream? (someone correct me if I’m wrong) – but do you really care?  Just know that this was amazing to my tongue. 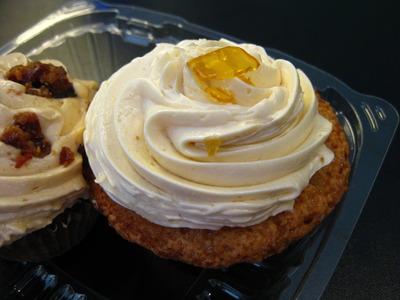 The third cupcake?  Last and so not least?  Tres leches cupcake with a dulce de leche frosting.  OMG.  OMG.  OMG…!  I talk often about textures in food because I am all about textures.  Most cupcakes taste like miniature cakes; the benefit of miniaturizing them has always been, in my mind, to increase the amount of ‘crust’ you get (like those weird shaped brownie pans that make sure every piece is a corner piece).  Sure, fine, whatever.  Cake is tasty.  Cupcakes are good.  But this went beyond the cupcake norm.  The cake part itself had a chewy texture – in the best possible meaning of that word.  The top was slightly chewier, like the edge of a brownie (without that chocolate taste, hah), and the rest of the cupcake was just delicious.  It was slightly sweet, with a fluffy frosting that went so well with the cupcake base.  I was truly in awe.  And I don’t say this lightly – but these were the best cupcakes I’ve eaten in all of my cupcake eating years.  I was seriously blown away by the texture; the flavors were great, don’t get me wrong, but what sets this cupcake apart was definitely the texture.

I had the chance to talk to Allison briefly about the cupcakes, so to those who want to replicate them, ummm… well.  15+ hours of labor for a batch of cupcakes.  She makes them in small batches (which I’m sure helps a lot to prevent overmixing, one of my big issues when I bake, well, anything) and puts so much time, effort, and love into each one, it’s truly amazing.

In the interest of full disclosure, I will mention again that Allison and I attended high school together.  However, we weren’t close, only had a few classes together, and we lost touch after graduation.  Talking to her that day though, I was truly blown away by her journey from math & science nerdy high school to owner of a gorgeous mom&pop shop in Bay Ridge.  I had to ask how it all happened, and her story really touched me.  She gave me permission to share this story with you.

While Allison was in college, she was unfortunately diagnosed with Hodgkin’s disease.  Needing to take a year off to get treatment and recuperate from said treatment, she found herself going stir crazy in the house.  She finally decided well, I’m here, let me make the best of it, and began cooking.  On good days, she’d devour cookbooks and taught herself how to cook; on bad days, well, she stayed in her room.  Thankfully for all of us, there appear to have been many more good days than bad days, as she emerged from her time off with a newfound deep appreciation of food, cooking, baking.  After she felt well enough to continue her life, she walked into a local bakery and said “I want to work for you for free and learn everything,” and they hired her.

You could say the rest is history, but what intrigued me was her husband, Matt, having a similar story.  He was set in his career as an EMT, but unfortunately became incapacitated during 9/11 and had to leave that position.  Eventually, through sheer serendipity and fortuitousness, Allison & Matt met, fell in love, and decided to open Robicelli’s, much to the rest of the world’s good fortune.

The rest is history.

(Please correct me if I got any of the finer details wrong!  Sometimes I’m really spacy.)

Aside from wonderful cupcakes, Robicelli’s has a wonderful deli counter with many luscious looking prepared foods (they have an amazing in-house chef), waiting to be your dinner.  The entire store has a friendly neighborhood feel to it, and it almost makes me wish I lived nearby.  The next best thing is one of my close friends just bought a house in the area, so you can be sure everytime I visit her, I will be stopping to pick up cupcakes first… and maybe do some grocery shopping for myself as well 😉

Yvo says: Were you not reading?  Best cupcakes I’ve ever had!  Best.cupcakes.everrr.  $2.50 each and you’re still reading?  Get out of here!
highly recommended