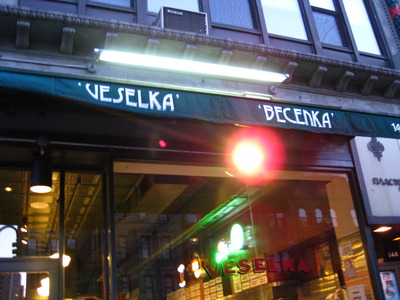 SpB occasionally likes to call out themed food nights.  A few Fridays ago was burgers & fries (we’ve done pies & fries before, actually, though I can’t find the post… I KNOW WHAT IS WRONG WITH ME?  I blame the lack of red meat… haha), but because my friends are just cruel enough to invite me to a burgers & fries night but not cruel enough to make it at a place that only serves (meat)burgers… we wound up at Veselka, a pretty famous Ukrainian joint in the East Village, which offers up quite a large selection of food, and, as it turns out, is really vegetarian friendly.  (You’ll see why I say this in a moment.)

I have to say that the hostess was extremely accommodating; at first, since we were only 5 people, they squished us at a tiny table, but AB alerted us that she was on her way, so they wound up making room for us and pushing two smaller tables together which wound up giving us PLENTY of room.  There was a decent sized crowd waiting, but the hostess and our waiter ignored the glares and just smiled at us merrily while moving the tables for us.  Bonus points (and a bigger tip) for a pleasant attitude and accommodating us nicely. 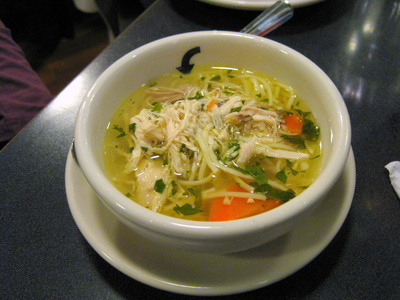 BB chose to start with a chicken noodle soup, which I didn’t try and unfortunately, did not get her opinion, but she seemed to like it well enough. 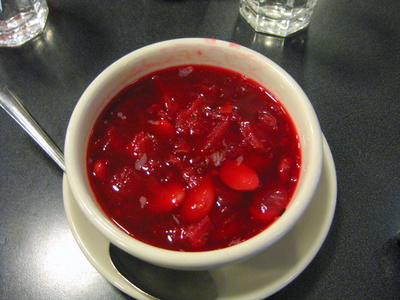 Both HB and I chose to start with borscht (included with our entree orders), though, to my surprise, the waiter asked me “With or without meat?” which surprised me.  First because I hadn’t known there was meat in borscht and second because I thought that was a great thing to ask – since I hadn’t known there might be meat in it, it would never have occurred to me to ask for it without, and then I would have accidentally eaten meat.  I had to remark on this to my friends, to which another girl at the table snarkily responded, “Because he just knew [you’re not eating meat].”  Hey, it’s my blog, and I’ll talk smack if I want to – but being in a pleasant mood, I just kind of looked at her and then ignored her.  Maybe he knew to ask because of what I ordered (more on that later), or maybe he knew to ask because some people just don’t like meat in their borscht.  Either way, bonus for him asking, and more.

As for the flavor, both HB and I were surprised.  She remarked that it didn’t taste like beets so much as it tasted like a tomato soup, maybe like beef vegetable, but I thought mine tasted like beets… just not quite as good as I remembered it to be at Uncle Vanya’s (I remark that I don’t like beets in that post, but I do now like beets).  SpB, having had final say as to the location of burger & fries night, had mentioned this was the best borscht she’d encountered, so maybe I shot my expectations super high.  I guess it boils down to personal taste – I enjoyed it, but I can’t say it was awesome. 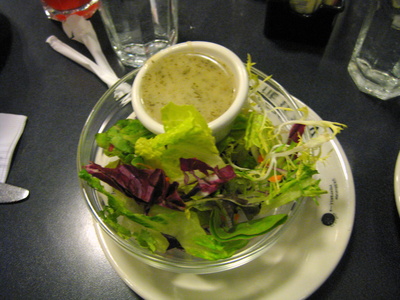 The salad that was also included in my & HB’s specials.  The greens were fairly standard, but the dressing was a lemon dill vinaigrette that I really enjoyed (and want to attempt to recreate at home!).  Slightly thick, very lemony but elevated with dill’s fresh “green” taste – I love dill, though, so if you’re not a fan, you may not enjoy it as much as I did.  Yum! 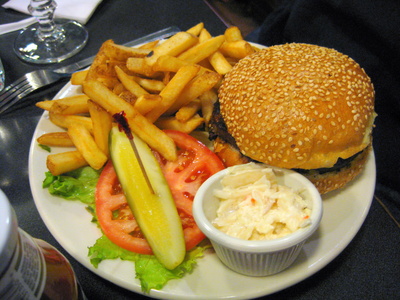 Funny enough, SpB wound up being the only one to actually have burgers or fries ($9.45)!  I actually have a direct quote of her opinion on the burger, which makes me sad that I couldn’t eat it: “Charbroiled grilled joy.”  She really enjoyed her burger quite a bit.  I think I would have too – it looks pretty good.  (It was also cooked properly; I didn’t take a shot but I did get a glimpse of the inside and it was pink enough but not too pink.) 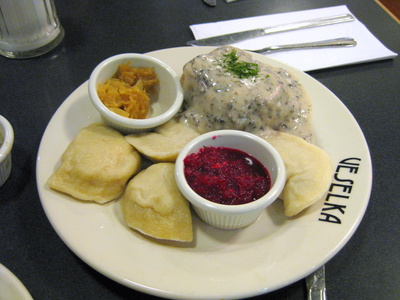 HB ordered the meat combo ($13.25), which included some pierogi and a stuffed cabbage roll.  I didn’t hear her say anything about it actually so I’m not sure if she liked it. 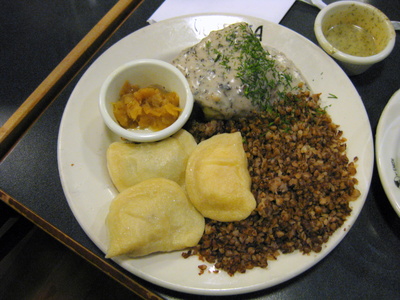 As for me, I ordered the vegetarian deluxe combo ($13.25), which came with kasha (buckwheat groats), a stuffed cabbage roll (rice, onions and mushrooms), and three pierogi: cheese, potato and cabbage.  The pierogi were interesting, but a little too dense and mushy for me – I may prefer them fried or filled with lighter options.  The cabbage roll was quite good, with very yummy mushroom gravy (the waiter made sure to ask me if mushroom gravy was okay to put on top when I told him meatless borscht)… and the kasha?  Well, this was my first time eating it, so maybe it takes some getting used to.  AB actually said “I thought you were eating corned beef hash, but I realized you’re not eating meat…” as she sat at the other end of the table from me, I guess that’s what it looked like.  I assure you that it did not taste like corned beef hash.  It had a dry consistency and tasted better mixed with mushroom gravy, but not so much by itself.  I don’t think it’s my type of thing… SpB mentioned that if I didn’t like brown rice, I probably wouldn’t like this, since the texture is similar.  Maybe that’s it.  Or maybe it’s the … smell.  I won’t say it smelled BAD, per se, but not appetizing to me (I eat a lot of things that don’t smell appetizing to my boyfriend, but that’s a matter of personal experience and preference)… so I had trouble eating much of it.  I ate everything else happily though and was thoroughly stuffed!

Yvo says: At less than $20 for everything I ate with tip and tax included, I would say this was a great place to learn about Ukrainian food and eat well for cheap.  The service was great, the location is awesomely convenient for me (I hang out in the area all the time), and we all had a great time yukking it up.  I definitely recommend it, especially as apparently their non-Ukrainian fare is delicious and cheap as well!  (A burger deluxe platter for less than $10 without tip & tax – cheap!)
recommended