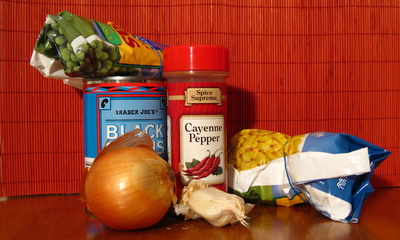 So you probably already know, I started this whole meatless thing this past Saturday.  I had to quickly come up with something to make for bento, and you know, to keep me from thinking I wouldn’t have anything to eat.  I brainstormed, I flipped through a terrible vegetarian cookbook I picked up at Strand – first, I’m an idiot for not looking more carefully before I bought it, but it was my first time really shopping there and I was so excited to find out everything is 50% off cover price unless otherwise listed.  And it was titled something like Vegetarian for Working People (I left it at home, I might edit this later to reflect the real name) – I really wish I had the name on me so I could link to it and tell everyone NOT to buy it.  It was a giant advertisement (this is the second point) for various vegetarian brands of prepared food, and the very few recipes it gave were vegan, which don’t help me that much.  I just did NOT like that cookbook.

Anyway, somehow I decided to make a “burger” out of mashed beans (I literally wrote in my notebook, “mash beans fry in patties – bean burger?”), not even having a clue that this is something that exists in many forms.  Instead of looking up a recipe – I don’t always like to be influenced, you see – I winged it.

Usually, this is fine for my purposes.  I’ve discovered lots of new dishes this way that are delicious and great.

Of course, with my recent “um, duh” moment – not realizing the egg in ricotta is important as a binder – I should have known it wouldn’t be that easy. 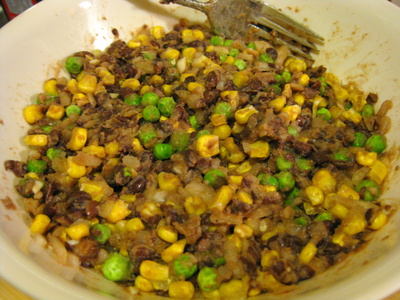 I took the above ingredients, drained and rinsed the black beans, mashed the beans with a fork and then stirred everything together.  I used frozen corn and peas cuz that’s what I had, but I wouldn’t have minded some fresh veggies or whatever, you know?  I began to get worried at how wet everything was, but I still didn’t think about an egg.  I thought about how I was going to fry an egg on top of this “burger” patty later, but I did not consider adding an egg.  Minced garlic, chopped onion, salt, pepper, cayenne pepper as well… this looked and smelled really good. 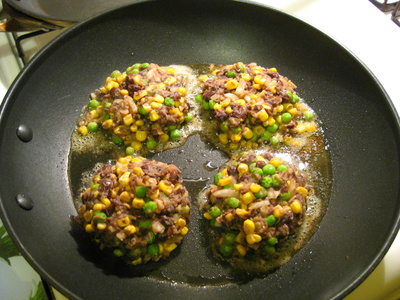 Look how perfect the bottom left patty is.  Well, as soon as I put them into the pan to fry, I knew something was wrong.  I watched as the edges crumbled a bit and realized there was no way I was going to be able to flip these.  So I stirred them around and let them become a relish or hash of sorts.  Very delicious.

In my defense, I didn’t grow up adding an egg – OR breadcrumbs – to ground beef to make hamburger patties.  Maybe my mom did it while I wasn’t looking (she also rinsed raw chicken parts when I wasn’t looking, a habit I didn’t pick up until I was um, 24 or 25).  Whatever the case may be, “egg as binder” is not – or WAS not – part of my vocabulary.  BUT IT FOR DAMN SURE WILL BE NOW.  So if you want to make awesome tasting black bean veggie burgers, do the above, just add a beaten egg to the mixture, and maybe some breadcrumbs, to bind it all together.  OK?

Or you can suck it up and do like I did.  When life throws lemons at you, you can pitch a hissy fit or you can make lemonade.  I like the second option, though I usually throw the lemons back.  (You can do that after you’ve squeezed the juice from them, too, so double win for you.)

I made black bean “relish” tacos.

It was a real stroke of luck that I’d happened to pick up corn tortillas from the store the other day; a huge pack for like, 99c.  Not the super pre-processed crap, either, these are the real deal (I want to say I saw a Mexican woman buying the same pack, but I don’t know if that’s racist and it isn’t entirely true, either; I saw some Latino-descent-looking-people pick up a package and buy it without a thought, so I figured they can’t be that bad, but hell, maybe people see me pick up dried noodles in the store and think they’re OK when half the time, I have no idea wtf I’m buying and am silently praying they are an OK brand).  They smell like corn, too.

The directions on the tortillas say to heat them on a hot griddle or skillet for 8-10 seconds each side, but at high flame in my heavy bottomed skillet, it’s more like 20-30 seconds until they char just a little and smell SO good, then flip, then do it again.  I just scooped some of the black bean relish on top, then sour cream and some cilantro (which you can feel free to add straight to the relish if you like when you’re making it!). 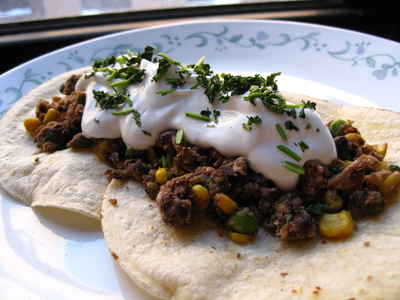 They already taste great like this, but I had to take it a step further. 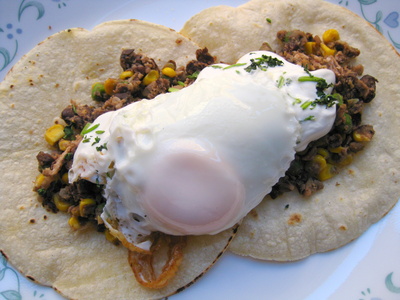 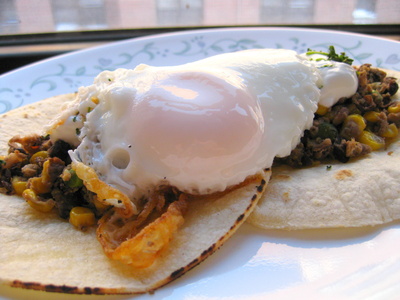 I added a fried egg.  And hey, don’t do what I did (which seems to be the recurring theme here – I think I’ll name this post that) – I used the same small skillet to make my fried egg that I’d heated the tortillas in, only the skillet was screaming hot and the bottom of the egg burned almost immediately (I even turned off the flame first, waited about 30 seconds to a minute, THEN turned the flame back on and added oil for my egg!).  Luckily it didn’t fall apart when I tried to scoop it out, but I did leave a little bit in the pan.

Wow, let me tell you, that was one freaking delicious breakfast.  Yum, yum, yum.

So, in a nutshell, if you’re looking for a real recipe, run along now, there isn’t one here.  I just gave you a guide to what you can do with this particular mixture.  Take it and do with it what you will: make the veggie burgers I intended to make, which I’m sure would be delicious properly “binded” (I know, it’s bound, but…) with an egg and patty-fried.  Or make the taco relish above, which looks just like ground beef (in fact, while looking at these pictures, I was thinking “No one will believe me that is beans” but it really is and it’s SRSLY good).  I don’t even really miss the meat when I’m eating these!!!  It’s versatile and delicious.  Go on.  Make it if you don’t believe me!

PS You can mix up the seasonings anyway you’d like, this tasted good with a slight kick.  You could add cheese on top which I clearly forgot to do, oops, even though I have, you can mix in curry powder instead, or you can use Italian seasoning, or chili powder… whatever you like!  Play with it a little and come up with your own, share with me if you’d like 🙂 Oh, I also rolled them up a bit – I need to practice my rolling skills! – and brought them for lunch.  Twice.