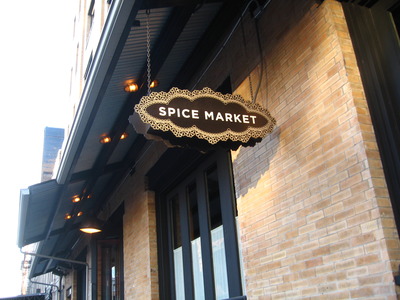 I had the good fortune to attend a Foodbuzz Featured Publishers dinner at Spice Market “recently” (October 18, if you must know! – I’m catching up!).  Stacy graciously put together the event, and I had a wonderful time sampling everything that was proffered. 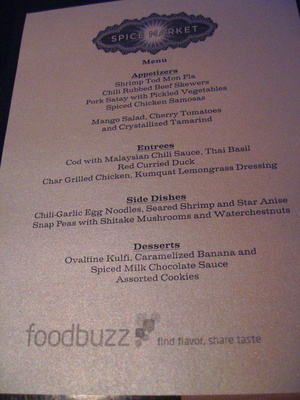 When we sat down, a menu was at each of our place settings.  I was surprised when we weren’t asked what we wanted, but instead brought each dish for the tables to share (multiple servings for our large group), which was a great way to try everything on the above menu.  Nice!  I also made it a point not to sit next to my usual partner-in-eating, StB (click for her thoughts of the night), so I could properly mingle and make new friends.  I wound up sitting next to Nichelle of Cupcakes Take the Cake (whom I’ve met a few times and is lovely!), Shoshi of Kosher Soul Food, Ewen from Comestiblog, and Adriana from What I Made for Dinner, and we had lovely if meandering conversations about all sorts of topics, including all the big no-no’s like politics and religion!

Before I get to the food and my thoughts (I lost my notes – this is what I get for scrawling it on my copy of the menu, which I now cannot find, doh!), here’s a list of who went and what they wrote about the event:

Stacey, our lovely hostess
StB, my buddy
Ewen
Christo
Adriana
(Did I miss anyone?  Please speak up if I did, I’ll add your link here!)

It was great hanging out and talking about food! 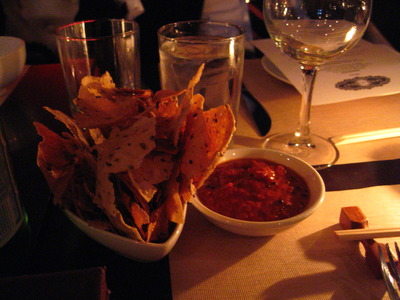 They started us off with pappadums and a spicy tomato-chutney.  I couldn’t eat too much of the spicy sauce, but the cracked pepper crisps were lovely. 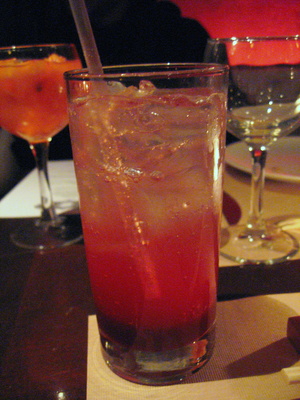 We were told that included in our set menus was a cocktail a piece; while the menu had a number of delicious sounding mixtures, I was unfortunately feeling a bit under the weather and decided to avoid most alcohol (I admit to having a glass of wine later!) and instead ordered this non-alcoholic concoction: cherry yuzu lemonade.  And oh my gosh, this was really quite fantastic; I tried to make StB try a sip but thankfully she remembered that I was feeling a bit sick so she declined.  But my stars it was GOOD.  I had to remember to pace myself! 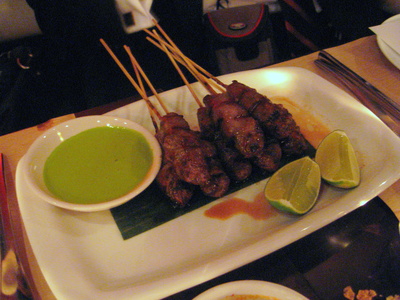 The first appetizer to arrive: the chili rubbed beef skewers.  I have had a lot of beef skewers in my lifetime.  I like beef and I like satay; the chewiness of the beef with the usual peanut sauce… yum!  But these – these were a whole other level.  I mean, I put one in my mouth and immediately I was blown away by how tender and soft these were – similar to kofte, the Turkish meatballs I often talk about because they were so soft and unlike most skewered and grilled meat.  I mean, wow!  The cilantro (I think) dipping sauce was a nice complement as well – I uhhh, wound up having 3 of these skewers.  (In my defense: we had a lot of extra food because a LOT of RUDE (no advance notice that they were bailing!) people didn’t show up, and it was offered to me.  I made sure no one else wanted the last one!

Hey, this was already looking promising, although I was trying to curb my enthusiasm at this point lest I bias the rest of the meal (in a bad way: first dish so good, and everything else a big let down). 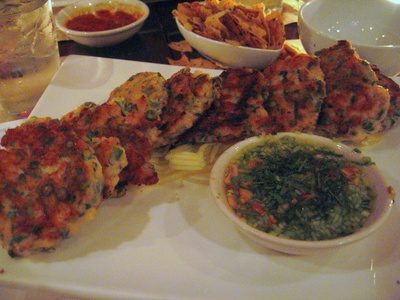 Next came the shrimp tod mon pla, served with what tasted suspiciously like “fish sauce” from Vietnamese cuisine.  A few fellow foodies commented that these tasted salty; I tend to like salty or savory items, so they tasted okay to me.  Aside from that, if memory serves, I thought the dish was alright, but not mind blowing.  Of course, a bit later, thinking back on this meal, I likened it to the fish cakes at Sripraphai, and of course, they couldn’t hold a candle.  Overseasoned, too much going on in each little cake, when really, the star of the dish should have been the shrimp – let the freshness and sweetness of the shrimp shine through!  Pass! 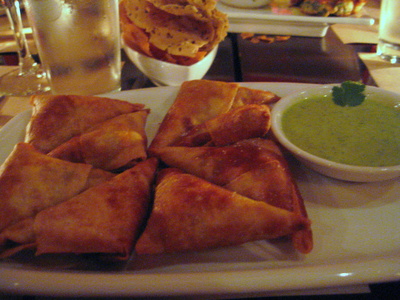 Spiced chicken samosas – I know quite a few of the other food bloggers loved this dish, but I was very much lukewarm on it.  There wasn’t anything special or unique about it, and while the flavor popped, I just didn’t find it intriguing.  It was very… ordinary.  (I’ll refrain from using the ‘p’ word for this dish.) 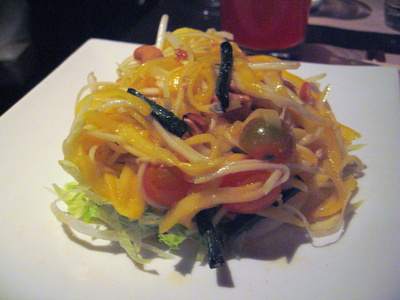 Mango salad, cherry tomatoes and crystallized tamarind – not very memorable.  I know I tried to eat some of this but found the plate being whisked away time and time again, so I imagine it was really quite lovely 😉  I’m sure it didn’t hurt that this was our only non-meat based appetizer, and while I’m a meat-fiend and will take it in any form – in fact, I rarely can have an entirely vegetarian meal without feeling a bit off – I find that a lot of fellow foodies are borderline vegetarians, eating meat in less-than-moderation.  Oops, one more way that I’m so not a “real foodie” teehee. 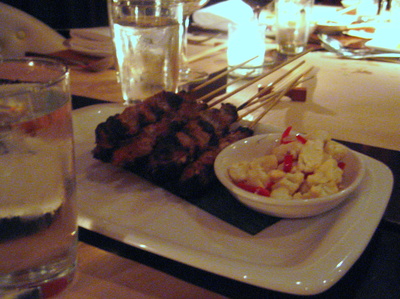 Pork satay with pickled vegetables – I somehow missed out on the vegetables, which I heard were delicious, and I don’t really remember much about the satay itself, which means it probably wasn’t anything special either. 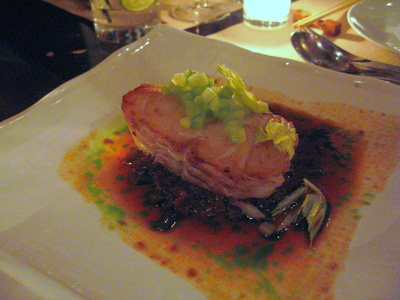 Cod with Malaysian Chili Sauce, Thai Basil – this dish was a lesson in being nice/eating with others/why my family says I’m too meek.  (Hehe, me!  MEEK?!)  We passed the dish around and I believe I was second to take; I took a small piece, thinking if I liked it, I’d take another piece.  Except the last person to take decided to take the rest of it, seeing that everyone had taken some.  I don’t blame the person who did it – it’s my fault for not taking a bigger piece – but it wasn’t a big deal, as once again, I didn’t find this dish to be particularly special.  It was very typical of many fish dishes found in Asian fusion restaurants – tasty but nothing exciting or new. 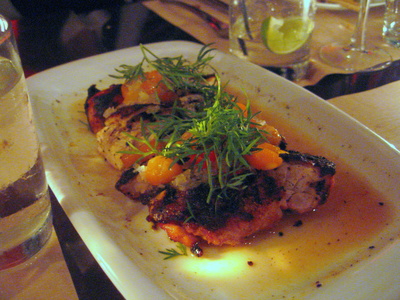 Char grilled chicken, kumquat lemongrass dressing – I do, however, remember this dish very well.  The first thing I tasted when I put a piece in my mouth was carcinogens.  I like grilled foods as much as the next person, but the outside of my piece was a bit overwhelmingly charred.  Otherwise, everything wasn’t bad – the dressing was pleasant to dip my chicken in, and the meat was tender and succulent.  Just ease up on the charring there, kk? 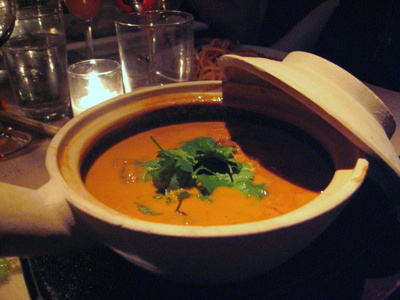 Red curried duck – now, obviously, the name clearly tells you that it’s based on a Thai dish, red curry.  Of course, I dipped in anyway, and immediately two things put me off: it was too spicy for me (yes, I’m a wimp!), and it was clearly made with coconut.  No coconut for this allergic girl, so I quickly stopped eating that dish.  Everyone else seemed to like it, though. 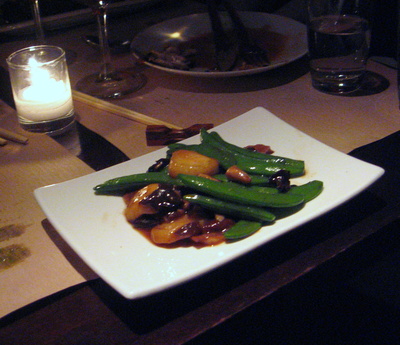 Snap peas with waterchestnuts and Shiitake mushrooms – how can you mess this dish up?  You can’t.  Yum, but I wish the portion had been larger.  I would have eaten a lot more – I love snap peas. 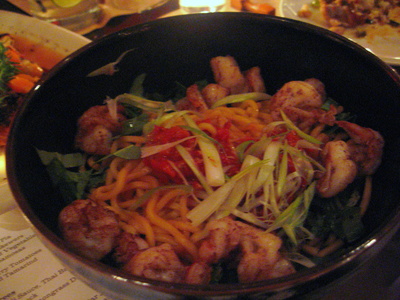 Chili-garlic egg noodles, seared shrimp and star anise – I had some of this and found it really yummy, but then I had another small scoop and my mouth lit on fire.  I don’t know what it was; maybe I got a bit too much chili in that 2nd scoop?  I don’t know!  But I had to stop eating.  Before the fire was lit, though, I enjoyed it quite a bit. 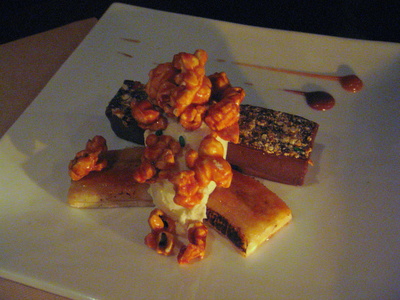 Ovaltine kulfi, caramelized banana and spiced milk chocolate sauce – this dessert was shunned by my sharing partner, who deemed it too rich or too sweet.  I really loved the banana, and mixed with a bit of the ovaltine kulfi was really good.  The textures were nicely played on each other as well; though I can’t imagine eating the whole thing (I ate between 1/4 to 1/3 of it myself), I could see splitting this with a few girlfriends and having a grand time doing it. 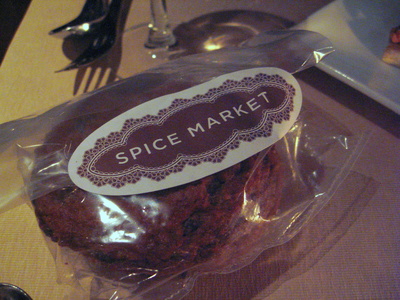 We also received “assorted cookies” in individual bags, which led to some confusion, as we received enough for everyone at the table but one.  Yes, I was the one left out (MEEK!) but Ewen kindly requested another for me.  The waiter said “Oh, those are just for sharing,” but then told us he’d go get us another bag anyway.  Which he did, squee!  When I got around to eating these cookies, the first two were awesome – dense, chewy, delicious, one oatmeal raisin and one chocolate chip.  The third cookie, which had the same texture make up – dense, chewy, perfect – was unfortunately a crystallized ginger cookie.  I detest ginger and found this one to be overwhelmingly ginger-y, with little bits of ginger getting stuck between my teeth, and the spicy flavor coating my mouth and throat.  BAHHH.  But the first two were delicious, and I suspect if you like ginger, you’d like the spicy cookie as well.

Yvo says: Overall, it was a wonderful event, organized and attended by lovely people.  I had a fantastic time, eating and drinking to our hearts’ content, and everything was lovely.  While I can’t truly attest to the restaurant overall since this was an event hosted by Foodbuzz (ie, paid for by them as well), I can tell you that our service was impeccable – we were constantly swarmed by so many waiters, I lost count after a while – and they were nothing but courteous and helpful, describing each dish as it came and bringing us drinks as we needed.  Awesome.  I could see going back but mostly for drinks and appetizers – definitely not for entrees as nothing was really standout for me, and I’d prefer to have a wide array of stuff versus one or two mediocre dishes!
recommended for drinks and appetizers