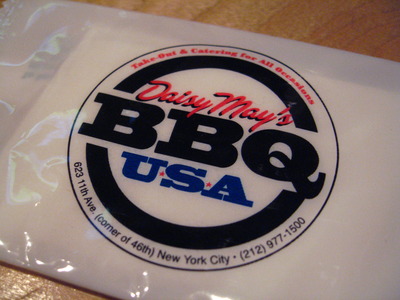 Though she makes fun of me constantly for having a social calendar that is booked up months in advance, RotaryGirl sent me a meeting request for October – the week I returned from San Francisco – back in late August, something I can’t help but make fun of her for.  She said, “What do you want to eat?”

Everyone around me had been asking me for weeks the same question: DT asked me; Robyn asked me; LTS asked me; Rochelle asked me… So really, all I had to do was pull out the same list I’d been rattling off to people of potential places and let her choose.

Happily, she chose Daisy May’s BBQ, a place that has been on my radar for ages.  It’s been mentioned on Midtown Lunch a few times, and I even tried to get to their Wall Street Cart a couple years ago, much to my dismay, right after they’d stopped appearing.  I searched in the cold for 3 whole days, completely confused and wandering up and down Wall Street in search of this elusive cart… 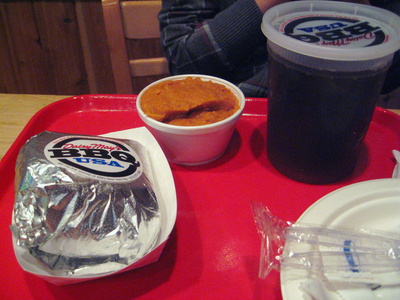 RG’s order of a pulled pork sandwich, mashed sweet potatoes, and sweet tea.  She convinced me I should try sweet tea, even though I’m highly sensitive to caffeine.  Apparently, she is, too, since the latter half of our evening was filled with our rapid fire chatting, something that terrified our fellow diners and forced them to flea… I discovered a side to her I’d never known (I still can’t believe you actually flung it at/on him!!!). 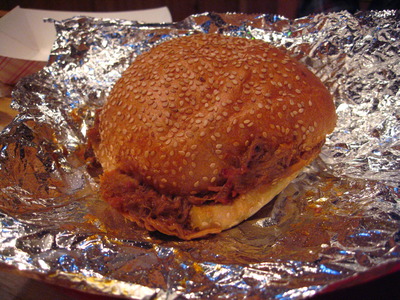 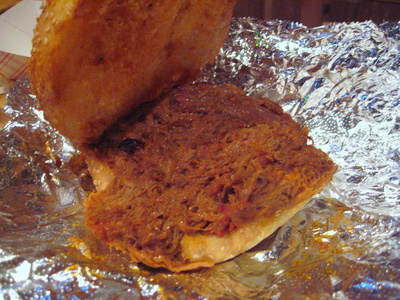 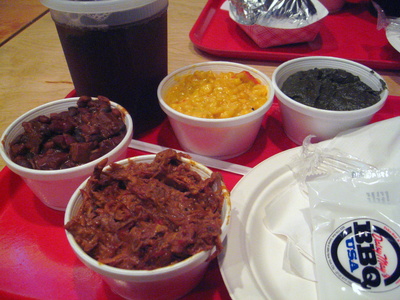 Meanwhile, for $14, you get an entire cupful of the pulled pork and two sides!  Why does anyone get the sandwich? 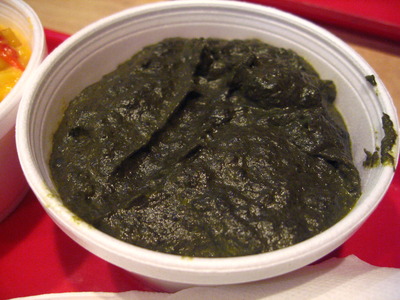 The creamed spinach is really creamed.  In fact, it’s um, baby food.  Did they puree it?  I really like textures in my food, especially my creamed spinach, which I have, on occasion, derided other places for using chopped spinach instead of whole leaf.  I know it’s messier to use whole leaf (when you’re scooping it, as it tends to clump), but let’s be honest, it makes for a hearty, hardier mouthful.  It’s my preference, maybe I’m the only one, but anyway, I can’t imagine anyone besides the toothless (too young or too old) enjoying this creamed spinach.  Giant, giant FAIL. 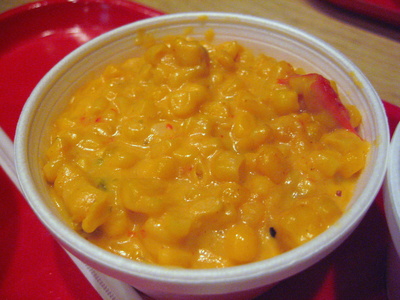 However… on the very far away other hand… this “rustic creamy corn with NY state cheddar” – not really like any creamed corn I’ve had before – was mind-bogglingly delicious.  Red peppers mixed in, cheese – CHEESE, are you listening to me, people?! – and overall just absolutely outrageously delicious.  Probably one of my favorite parts to the leftovers. 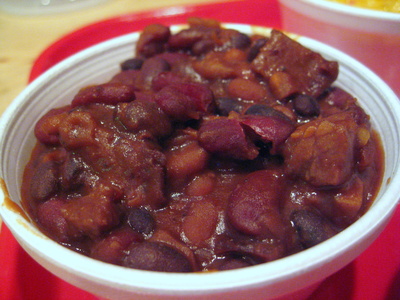 I opted to add on another side – baked beans with burnt ends, something I absolutely love.  (I should have just not ordered the creamed spinach, darn!)  There was a nice mix of beans, different kinds but I don’t know enough about beans to tell you what kind.  The taste was just right – not too smoky or burnt – though I prefer my beans to have a little more ‘liquid’ or ‘looseness’ to them.  I still thought this was quite yummy, and I liked how there was a lot of burnt ends in there, not just a hint.  YUMMY, extra beefy goodness?  OKAY! 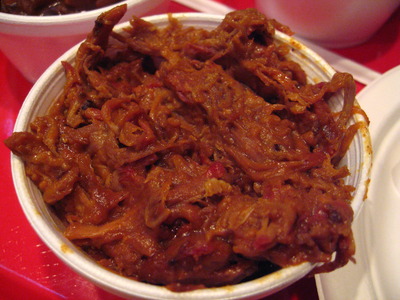 As for the pulled pork.  We know, Yvo loves pulled pork.  Like, LOVES it and would MARRY IT or BATHE IN IT – well, no, that’s just disgusting – but really does love it with a passion.  I’m always on the search for slightly-more-accessible pulled pork-liciousness, more accessible than Dinosaur BBQ and even though Daisy May’s is crazy far from the train station, it’s still slightly more accessible.

generous amount of meat.  I like my meat a little fattier, creamier/softer.  Flavor good-molasses? in the sauce – very tangy, yum.  Dinosaur still better.

That’s straight from my notes.  Can’t deny what I wrote, can I?  Having said that, though, I do know that I ate my leftovers the next day happily, without complaint, and that it was delicious regardless and appreciated. 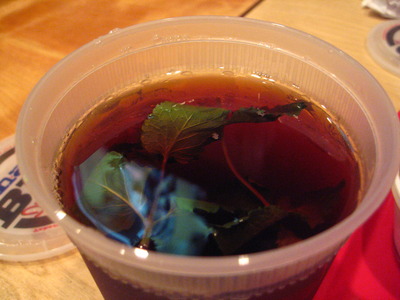 As for the sweet tea?  I was a little disappointed that I was still charged $4 for it even though no mason jar appeared.  When I asked the guy behind the counter (who seemed like the owner or manager) about that, he told me, in all seroiousness, tha Wal-Mart buys them all and he has a hard time getting any for the store.  I asked him if he was making fun of me, and he swore he wasn’t, but he could put my name down on a list and they’d send me one when they got them in.  I said, “Okay!” because I want a mason jar! and he went into the back, but never took my name or information down.  What the heck?!  😛

The tea was delicious actually, not cloyingly syrupy sweet like I thought it might be, but just right.  The mint sprigs floating in there made me wary – I’m so not a fan of mint in any application aside from “with chocolate, the darker the better” – but it really added a subtle nuance to the tea that took it to another level.  Even though I was wired for hours from it, I really did enjoy the taste.

Yvo says: Overall, a pleasant experience, with fare that tastes pretty good.  With tax, my meal came out to $25, and it stretched to just over two meals (I had enough for bento the next day, and I think just a little bit more than that which probably rounded out my dinner the next night as well), so it’s not cheap per se, but it’s not exactly expensive, either.  I liked the place enough to return, though I wouldn’t say it’s an absolute must-go-right-now.  (Though I’m heavily craving pulled pork now!)
recommended