Still seeking our all-you-can-eat restaurant, upon our return to Buenos Aires (and the same hotel), our concierge directed us to Rodizio, of which I looked up the meaning once back in the States and discovered that Rodizio is the style of cuisine (where the Brazilian restaurants keep bringing you more and more meat), not churrascaria.  Oops! 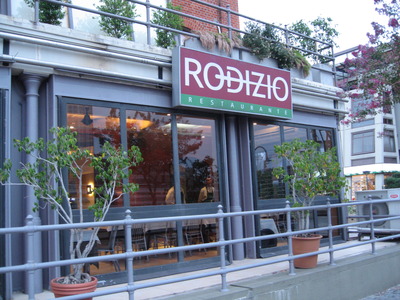 This is going to be a picture-intensive post, so bear with me.  Also, keep in mind while looking at these pictures, this entire meal cost us $27 USD. 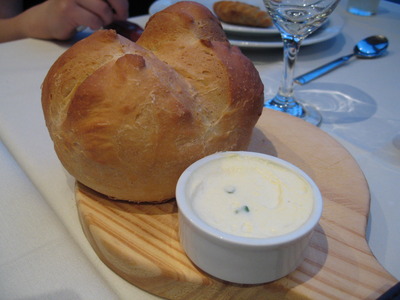 Bread with tangy butter spread on the table 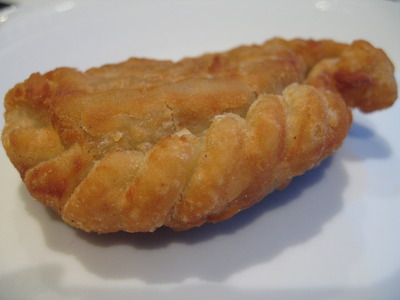 As soon as we sat down, they served us this, which we thought was an empanada but might have been a salgadinho, Brazilian snack that is like an empanada… 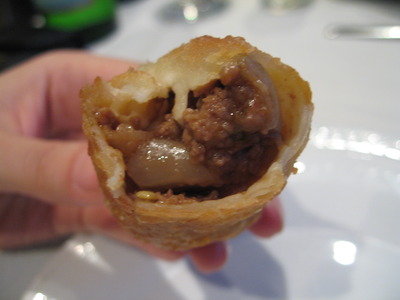 Now, for pictures of the accompanying buffet, which are many and wow, speak for themselves.  Excuse the blurriness, I had to take them quickly since the waiters were looking at me uncertainly, possibly wanting to stop me, and people were starting to crowd the place. 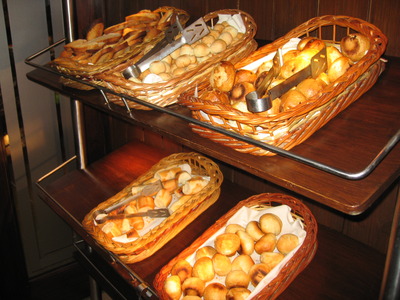 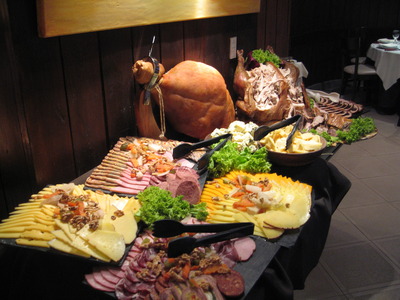 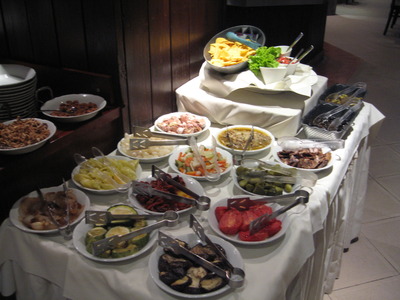 The pickled/antipasto section, with marinated veggies, olives, … yum.  I am getting so hungry right now! 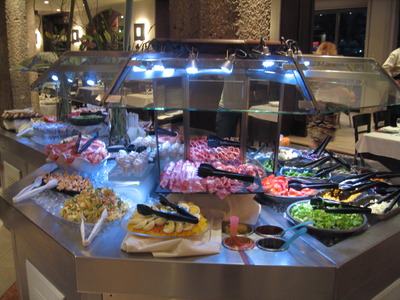 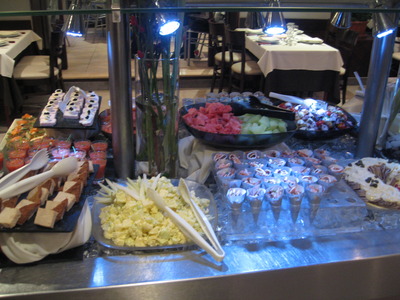 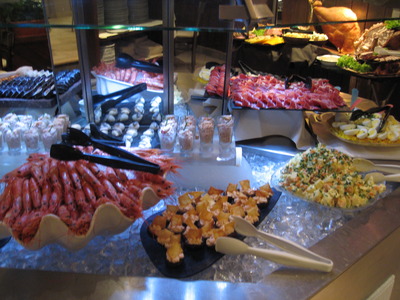 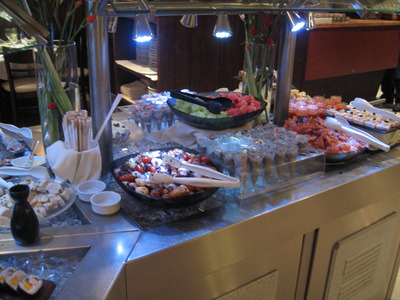 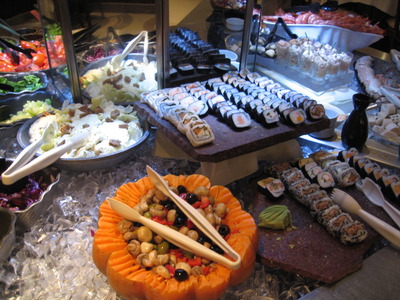 I guess I foreshadowed when I said, “I’m worried; places like this, if the buffet is really good or has a lot of awesome stuff, sometimes it’s because the meat isn’t that great… or it could be everything is really good,” I offered lamely when everyone turned to look at me.  Haha, oops. 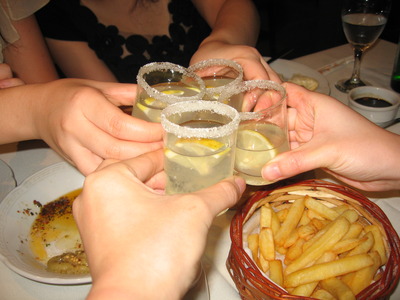 When we’d sat down, they’d presented us with the bread, the empanadas/salgadinhos and lemon drop shots for some reason… 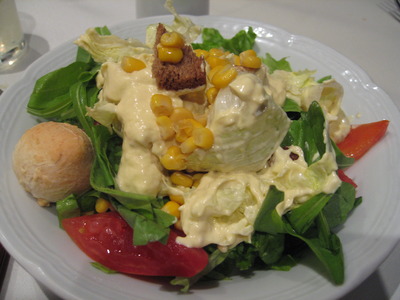 The salad I started off with – yummy, lots of greens to choose from. 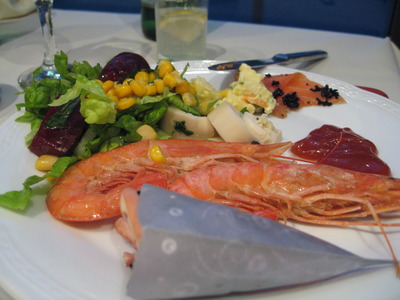 HB’s first plate- look at the size of those shrimp/prawns!  As big as my hand and tender, sweet.  We all agreed the hearts of palm were too soft, however. 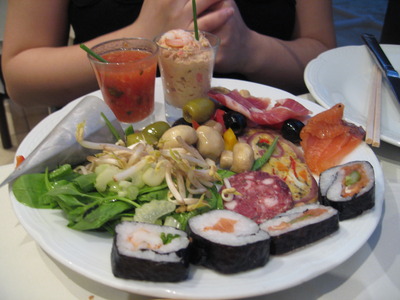 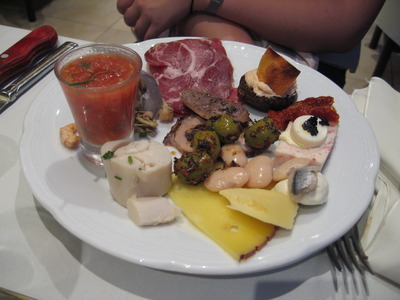 My first plate : I was pleasantly surprised by the little cup with a shrimp on top; I’d thought “Oh, shrimp with tuna salad underneath” but it was lobster salad and quite tasty!  The salmon with roe was only so-so, but the little cone was filled with octopus and quite tasty as well.  The sushi pieces were weird: the rice not quite done properly, smashed down and not the right taste to it; and the fillings were just odd.  The stuffed mushroom cap was good, though.

And then the meat began. 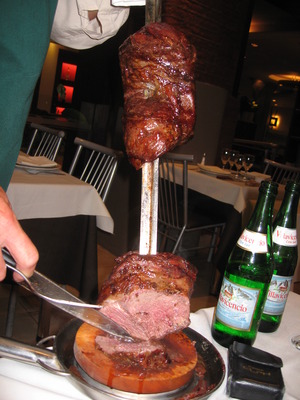 Perfectly cooked!  The slicer wanted to take a picture with me.  I obliged, happily waiting for the succulent meat to enter my mouth and astound my tastebuds. 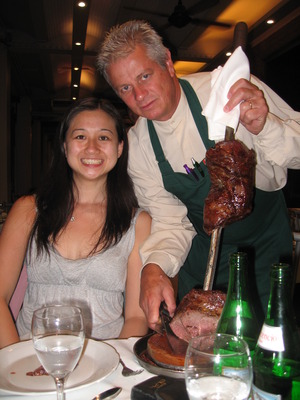 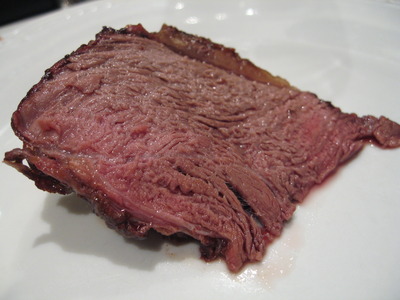 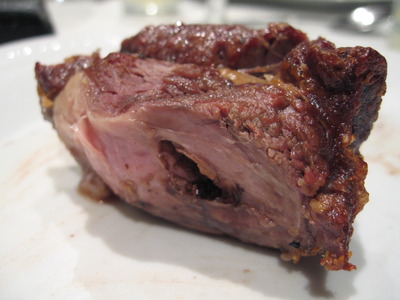 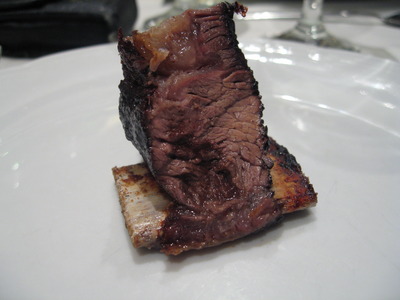 Three different cuts of meat; oh, the meat.  Terribly disappointing because despite the glorious way it looks, despite all that, it was completely flavorless.  We’d read that the national “spice/seasoning of choice” here was salt; salt hadn’t seen these pieces of meat at all!  I doused my meat in the chimichurri from the salad bar, which of course was delicious, but the meat would have been so much better had it seen some salt before being cooked.

We were pretty full at this point, but of course had to partake in dessert! 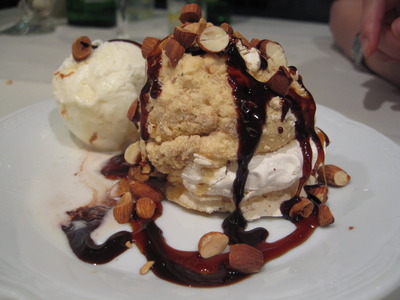 HB’s something or other – she thought it was alright. MD/PB’s something or other, that she liked very much (flan? with dulce de leche and crema on the side). And last but not least, my something or other.  I’m sorry!  It’s been almost two weeks since this meal happened!  And I tried to get through these reviews as quickly as possible.  I’m looking at this picture right now, and I’m amazed by how good it looks.  The fruit gently spilling over the top, the walnuts on one side… but the dessert was good, not mindblowing, and I was too stuffed to finish it all.

Yvo says: At the total price of, with a generous tip, $27 USD per person, I can’t deny that this is a great value.  The buffet alone is worth that price, but if you do go, go knowing that the meat will need generous salt and that it is not the main attraction here.  The buffet is definitely worth a go, and go hungry!
middle of the road, more recommended than not