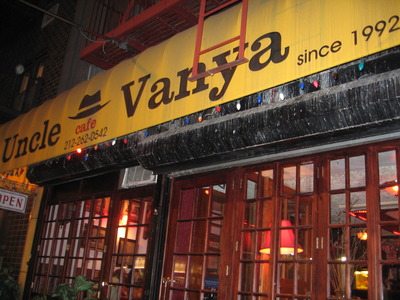 I’m not sure how we started out looking for sushi and wound up with [cheap] Russian food, but that’s where we found ourselves on Tuesday night- on 54th between 8th & 9th Avenues, on a dark & deserted block (I arrived late and alone, and was a bit creeped out walking up the block towards this place).  It proved to be a good choice by StB, though. 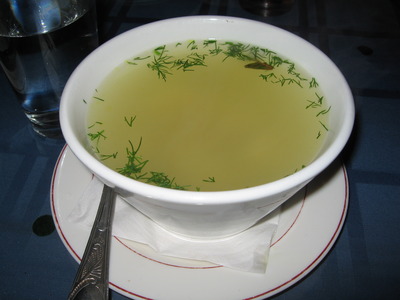 StB started off with the chicken & pelmeni soup.  You can’t see it, but there are a bunch of pelmeni at the bottom of this bowl; pelmeni being the Russian equivalent of a dumpling.  She said she liked this, the soup was very clear and not loaded with a bunch of other crap.  I actually ordered one of these to go, and when I had it later, it was surprisingly very fresh tasting and not thick or goopy, loaded with fresh dill and almost crisp.  The pelmeni had a thick dough, but were tasty nonetheless, though I vastly preferred the soup to the dumplings. 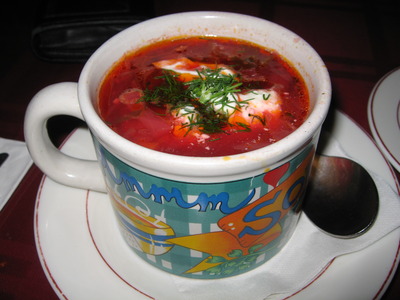 I ordered just the borscht (I wasn’t very hungry), hot.  This was very hot when it arrived, but delicious.  Loaded with beets, onions, tomatoes, the entire thing was more veggies than broth, but it was really quite yummy.  It got to that part of you, were it a cold day, that nothing else could warm up.  I really enjoyed my borscht, despite generally not liking beets (I grew up eating borscht sans beets, so I didn’t really know there’d be beets in it).  The gently sweet overall taste complimented the dill nicely, which added a fresh taste to the whole cup. 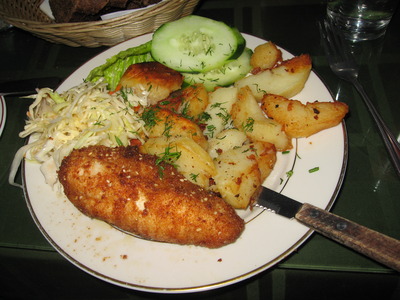 SpB ordered the chicken kiev, which she said she liked, though the potatoes were a bit too salty. 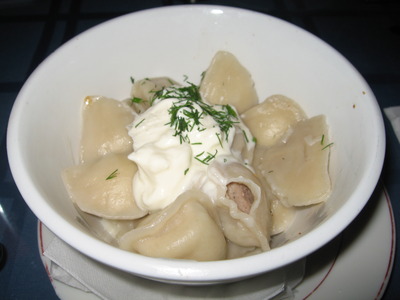 BB‘s chicken pelmeni (what StB had eaten in soup) were also appreciated, though she had to push all the sour cream off as she’s not a fan of sour cream in general.  I believe she enjoyed her dish. 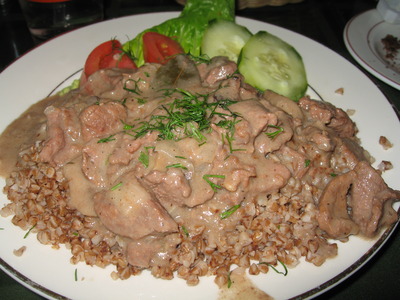 ShB had the beef stroganoff over kasha (instead of what we’re used to as egg noodles), which she said was enjoyable, definitely yummy, though next time she’d prefer it over rice or, the favorite, egg noodles. 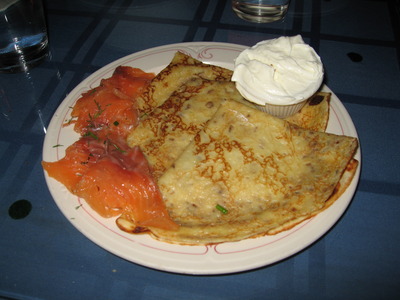 Yvo says: I would definitely go back.  The entrees were all fairly cheap and my borscht was only $5-6, and I was satisfied afterwards.  There were other things I’d like to try on the menu, and though it won’t any points for location, atmosphere, the servers were friendly enough and I thought it matched the overall feel of the restaurant: no frills.
recommended