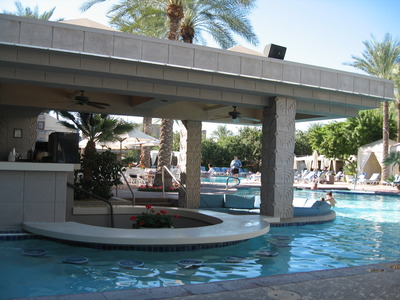 The Arizona Biltmore boasts a few restaurants to its name.  Unfortunately, we were unable to sample the high end restaurant they boast: Wright’s at the Biltmore (named thusly after Frank Lloyd Wright, who had a hand in designing the resort).  We did, however, get to eat at the Cabana Club and the Biltmore Grill (pictured above: the Cabana Club, located on Paradise Pool). 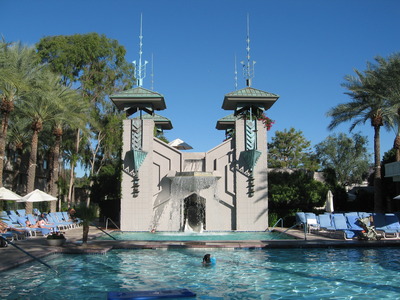 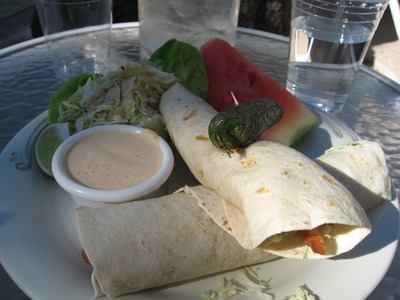 I ordered what basically boils down to a soft fish taco.  I really liked this dish (I actually had it twice)- the fish was crisply fried, the remoulade on the side was delicious with a hint of a spicy kick, and overall it was very tasty.  I would definitely order this a third time were I to stay at the Biltmore again. 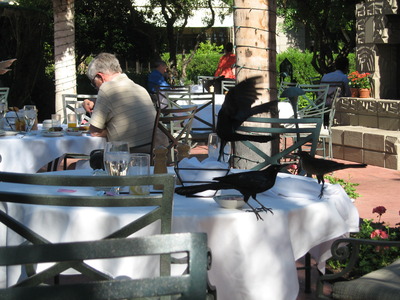 At the Biltmore Grill, where we had our last meal before leaving for the airport, indoors looked like a kitschy-retro diner, but the weather was so beautiful, we opted to sit outdoors, where the birds circled us, waiting for scraps.  In fact, the menu even said specifically not to feed the birds, that they were aggressive and very bold/friendly. 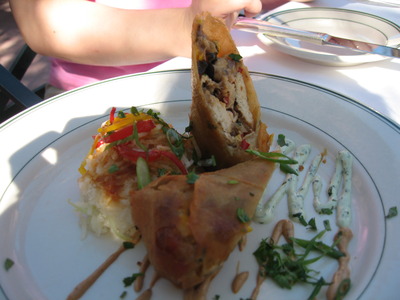 We started off with what the menu labeled as “Southwestern Eggrolls.”  I’m not even really sure what an eggroll is anymore, but these were pretty good- the filling was, I believe, chicken, but not too dry nor overcooked, and the dipping sauces were tasty accompaniments.  The outer shell of the eggrolls were very crunchy, the way they should be. 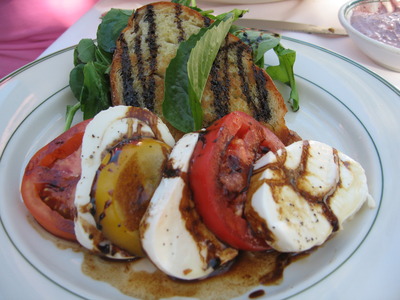 The tomato/mozzarella salad was decent, though not the best I’ve ever had – good cheese is very hard to find.  The tomatoes were sliced nice and thick, a bonus, but something just was missing and didn’t wow me.  Perhaps they could have added the traditional basil accompaniment, I’m not sure. 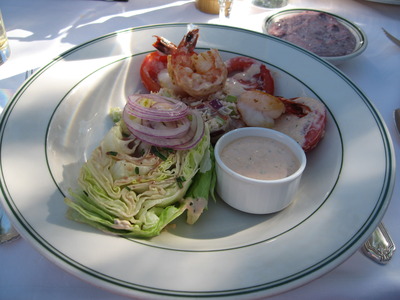 I didn’t sample my dining/travel companion’s crab louis salad, but she mentioned that the crab was good, not canned, and the shrimp were fairly sized.  I believe she was pretty happy with her choice, as she ate her plate clean. 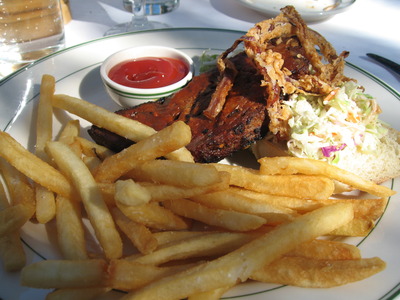 Having read about this Dr. Pepper BBQ sauce, I opted for the buffalo meatloaf glazed with Dr. Pepper BBQ sauce.  The French fries were good, but lacked salt.  As for the buffalo meatloaf… well, buffalo meat is known to be dry (or at least the few times I’ve had it, it was desert dry), so I wasn’t expecting too much.  The glaze over it was tangy, with an effervescent taste to it- like many things that you cook with sodas- and pretty nice, but I had to request extra sauce to mask just how dry the meatloaf was.  When I dipped it into more sauce, the sauce was basically BBQ sauce with an effercesvent tingle to it but not much else that made it stand out.  I wouldn’t order this again, but I might attempt to copy and improve the BBQ sauce with soda (I’d use root beer because I love root beer!).

We also ordered two sandwiches to go- a grilled chicken sandwich and a Biltmore burger- for the plane ride.  I really enjoyed my half of the chicken sandwich, but the burger was only so-so, a regular burger with some stuff slapped on top.  (No pictures, sorry.)

Overall, the food at the Biltmore was decent to good- a few hit and miss items really.  If I were in Phoenix again, I’d like to try Wright’s, but I don’t think I’d want to stay at the Biltmore again.  The facility was beautiful, but I felt there wasn’t enough attention paid to detail, which is important to me.  Small things that aren’t that big of a deal by themselves, but when you add them all up, the result is the feeling that too much is put into an overall impression rather than actually making you feel like it was a worthy experience.

Yvo says: If you’re staying at the Biltmore, no fear, there is definitely food to be found that will sate nearly any palate.  If not, I wouldn’t bother to go out of your way to eat at these two restaurants.  OH, there is also Afternoon Tea at the Biltmore, which was booked up when we tried to go, much to my great disappointment.  It’s on the pricy side- $32/person- but many women were dressed up, with hats even, to have tea, so it looked like it might be fun to try if you live in the area or if you’re just really that into tea.  (I’ve paid that much for tea- Lady Mendl’s– but I find it generally not worth that much, when I can get good tea for much cheaper at Alice’s Tea Cup or even Podunk.)  In any case, I say pass unless you’re staying at the resort, which I wouldn’t stay at again (unless it were for free).  The spa was only so-so, not as well kept as I’d have liked, and though there were 9 pools all over the resort, it seemed like most people hung out at the Paradise Pool (pictured above).
middle of the road