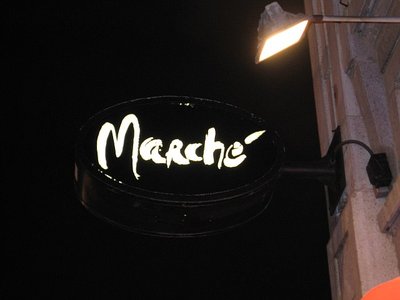 As soon as we walked into Marché, I was pleased.  The only word to describe the space is “open”, because the restaurant sprawled lazily about a large area.  Despite being fairly crowded, the noise was not overwhelming- we had no problems hearing each other over dinner, a problem common in NYC restaurants- and we were not sitting on top of people next to us.  In fact, we had an awesome table, on a slightly raised platform, in a corner, so we overlooked the entire restaurant, with the open kitchen directly to our backs.

Our waitress, who interestingly enough was Asian (interesting only because I feel like it’s rare in NYC for me to come across an Asian server in a non-Asian restaurant) and dressed completely like a patron, not a waiter (as were all of the servers), was friendly, attentive but not overbearing or in our face about things. 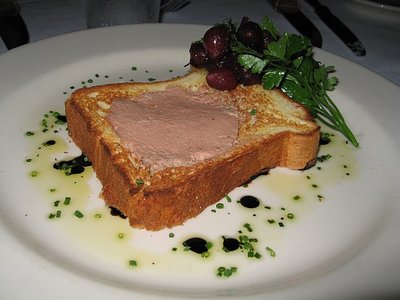 We decided to start the night off with only one appetizer: duck liver mousse, served with toasted brioche and pearl onion marmalade.  I pointed out here the irony that a French restaurant would call foie gras “duck liver” when foie gras is duck liver.  I thought perhaps that was the point; however, several days later, I discovered that foie gras isn’t simply duck liver, it’s fattened duck liver, which means they actually force-over-feed ducks in order that their livers are fatty and delicious.  Apparently, it is an animal cruelty issue (akin to veal, in my mind).  Also, a week after our visit, Chicago passed a ban on serving/selling foie gras within city limits, a crime punishable by fine.  Perhaps that is why they did not have foie gras…

Interestingly, while we were eating it, still under the impression it was foie gras, we all commented on the distinctly liver-y taste (as opposed to foie gras, which is much smoother and less organ/crumbly tasting).  From the picture, as was my first impression, I thought it was just a smear of pate on a thick piece of toast, which really irritated me.  However, it turned out to be a hollowed out piece of brioche, we were pleased to find out.  The accompanying complimentary bread basket also went nicely with the duck liver pate; but the real star of the dish was the pearl onion marmalade (hidden under the greens in the top right corner of the picture).  These delicious little pearl onions mellowed out and really brought the entire dish together with a sweet and lightly tart flavor.  Otherwise, the duck liver tasted just too much like liver to me. 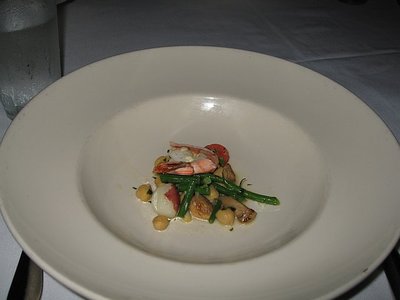 While we were waiting for our next dish, they brought us a small complimentary dish, shrimp provencal.  Are we too cynical?  We noticed no one else near us received the same, so we believed it was because they messed up one of our dishes (we still aren’t sure whose, though mine came under scrutiny) and wanted to make up for it.  I, along with all of my dining companions, actually really enjoyed this dish.  The herbs provencal really brought out all of the clean flavors of the artichoke, chickpeas, and potatoes, making this a hit.

Part of the reason we thought something may have gone wrong in the kitchen is that there was a long lapse between this complimentary course and our main courses.  Despite this, since the music wasn’t loud, we had a fine time looking around and chatting. 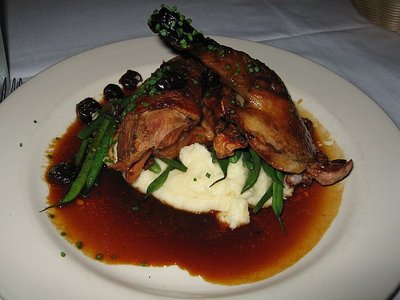 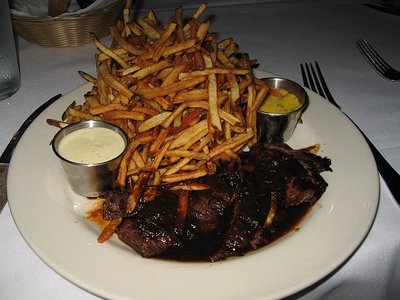 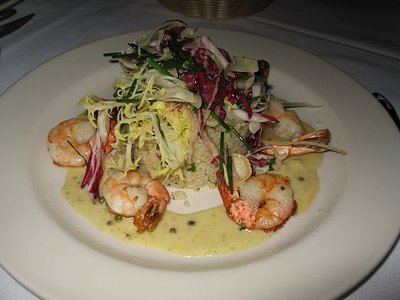 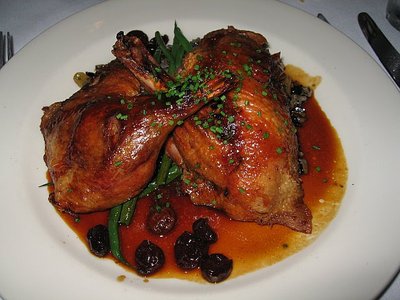 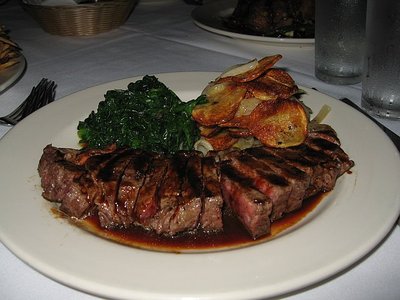 The first dish, my dish, was an entire 1/2 duck.  The duck was, at first, very tender and yummy, moist and juicy.  But as I got more into it, the duck became overcooked, dry, and chewy, tough to swallow.  The sauce was good, the potatoes super creamy, and overall I liked my dish, but I could not eat about 1/2 of the duck (which, I guess, would be about 1/4 of a whole duck).  I have to say, though, my overall experience was not ruined by this: I would still go back, were I in the area.

The dining companion who ordered the steak frites enjoyed her steak being cut up for her, and the mound of fries was tremendous.  I believe she said that the steak was just “okay” – it was a skirt cut – but nothing horrible nor wonderful.  Passing.  The garlic mayo that came on the side for the fries was deliciously garlicky, but if you’re not a garlic fan, it is very overwhelming.

The girl who ordered the shrimp madagascar enjoyed her dish, though she said the cous cous was a bit harder than she expected.

Another girl also ordered the duck, though she stuck with what the menu said and got wild rice (I detest wild rice).  She really liked the wild rice- she even said I should try some since it wasn’t like other wild rices she’d had- it had sliced walnuts and other things mixed throughout that she said was yummy.  She didn’t have as much trouble with her duck as I did, though she did say parts of it were overcooked, as mine had been.

The last girl, who ordered the bistro steak, said hers was just okay, not that great.  The potatoes were yummy, and the spinach was good, but the steak fell flat of her expectations (I feel the need to note that this is one of my friends who has made a point to visit all of the top steakhouses in NYC…).

We actually skipped dessert because nothing on the menu particularly stood out, and we were pretty stuffed at this point.

Overall, I think we had a pleasant experience and despite most of our dishes only being mediocre, the ambiance and atmosphere more than made up for it.  Most of us said we’d go back (particularly if it was in NYC), the true test of a restaurant, because the prices weren’t outrageous, the food was good, though not great, and the service was above average.

Yvo says: Seriously, try this place.  I liked the food, and I would totally go again, and I’m not even a fan of French food (though I’m slowly developing an appreciation).  I say… somewhat recommended, particularly if you’re in Chicago and enjoy French food.  The décor reminded us of Cirque du Soleil: a French circus.  Very nice.