Reservations do need to be made in advance.

The Special Omakase Bar is an area where Chef Masaharu Morimoto himself prepares your food while you look on.  It’s amazing to see such a master at work, and none of the items served can be found on the regular menu.  This is not a traditional omakase in that the traditional meaning of omakase is a tasting menu, a showcase of the chef and restaurant’s finest in order that the diner get a feel for the cuisine of the restaurant.  This type of omakase can be ordered at the regular tables at morimoto nyc, starting at $120, a fairly reasonable price for generally around 10 courses of superb food.  I’ve had the omakase at the morimoto in Philadelphia, which was excellent, including many dishes also on the regular menu in a tasting size.  Ten courses sounds like a lot, and it is, but they usually reduce the size in order that you don’t throw up on the table from overeating.

At morimoto nyc’s Special Omakase Bar, pricing starts at $200, but you can go up as high as you like, in increments of $50.  You do not get more food, you get “more luxurious ingredients” as the waiter explained.  We opted for the $250 set, since most of us did not expect that we’d be going back anytime soon, and perhaps eventually this special seating will no longer exist.  (Chef Morimoto does three such seatings daily- 6:30, 9:30, and midnight; I can’t imagine him continuing this for years and years.)

Now, without further ado, my meal in pictures.  A picture is worth a thousand words… these are priceless for the memories they recall in my mouth. 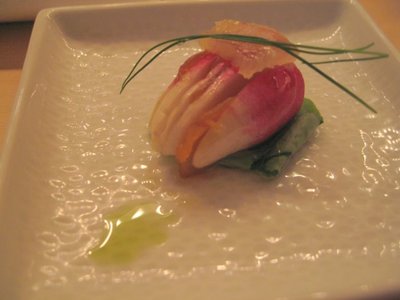 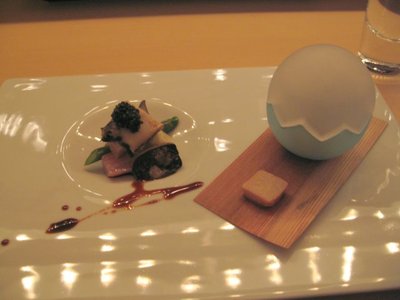 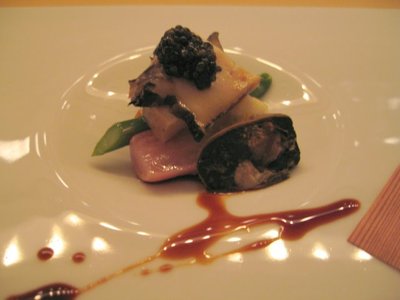 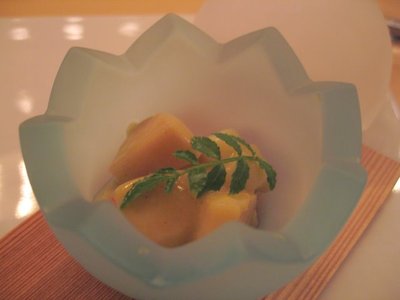 awabi with steamed winter baby vegetables in soy reduction with osetra caviar // live ika and fresh bamboo shoots in kinome miso
on the left: was very tasty and fresh, good start; on the right: love this presentation and really enjoyed the flavor as well.  it was sweet and yummy- this is one of my favorite choices from the night.  one of my dining companions hates bamboo shoots but enjoyed this.  i tried fermented tofu for the first time- see large picture, under the egg was a piece of it.  this was too strong for my taste. 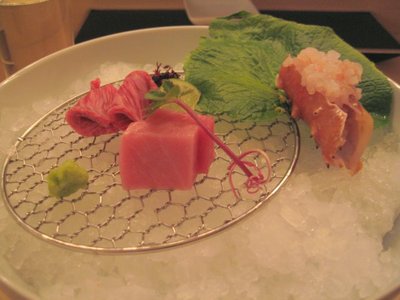 sashimi assortment, from top left: wagyu beef; hokkaido king crab; chu-toro (fatty tuna belly, top cut)
i’ve never eaten completely raw beef slices before- various beef tartares, but not this, nor any raw shelfish (minus shrimp).  the fatty marbling of the beef was great, and the dipping sauces on the side with chef’s recommendations as to dip which in which, was perfect.  the crab was sweet, interestingly so, and the toro was of course more fatty goodness. 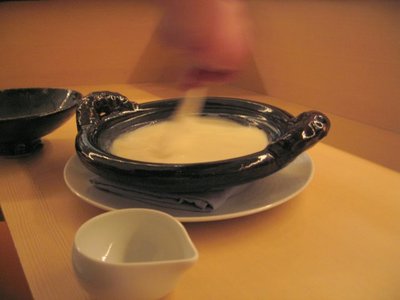 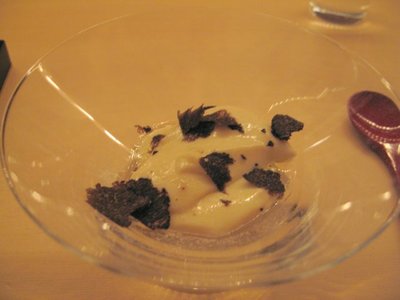 top: soft tofu made table-side; hot soy milk with sea/salt water being mixed in.
bottom: yosedofu with black winter truffles, truffle oil, and bolivian rock salt.
watching morimoto-san scrape the rock of salt against a metal board was interesting, and the salt itself was extremely tasty.  i hadn’t thought one salt could really taste better than another- salt is salt, right?  wrong.  the tofu itself was extremely mellow.  as i am not a fan of tofu, i can only say that it was awesome to have such fresh tofu. 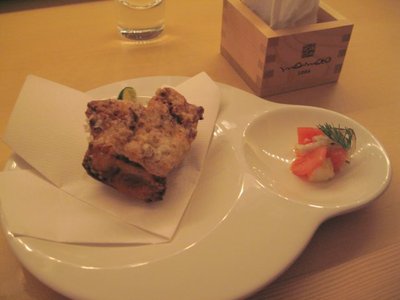 fugu two ways: karage (crispy bones) and fugu caprese
fugu is blowfish.  yes, this fish is actually extremely poisonous; if not prepared properly, expect to die within minutes of ingesting even the smallest micron of poison.  i’ve actually been interested in trying some, but did not realize that it was available in nyc and was thinking when i’d have the time to go to japan.  the crispy bone version wasn’t my thing: it was almost entirely eating against fish bones, something i’m very adverse to from numerous incidents as a child.  the fish itself was fairly bland- moist and tender, but lacked its own distinct flavor.  the breading they used, however, was flavorful enough to more than make up for it.  the caprese version was yummy, since i adore tomatoes and the buffalo mozzarella was a very mild accompaniment. 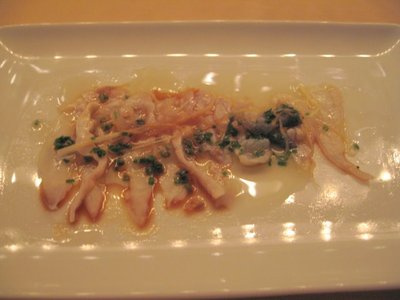 fugu carpaccio: ginger & scallions, yuzu soy, seared with hot oil
yes, more blowfish.  in japan, it is traditional to serve fugu three ways (generally one raw, one fried, and one poached in broth is my understanding).  this was really quite delicious- fugu is known to have little of its own taste, and the appeal for the diner generally lies mainly in the danger associated with eating a possibly deadly fish, but served this way, there was no lack of flavor.  despite clearly being an imported fish, there was no fishy or icky taste to this. 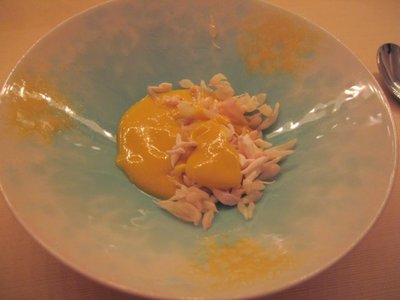 intermezzo: pomelo flashed with liquid nitrogen served with a mango-coconut puree
this was the most interestingly prepared dish all night.  we watched while he took a strainer and dipped pomelo into a metal contraption apparently containing liquid nitrogen.  this created a taste almost like ice cream, with the mango coconut was truly remarkable and delicious.  we were all duly awed by this dish.

not pictured: sushi: oto toro, sima-aji
oto toro is the second highest cut of fatty tuna.  the other piece was striped bass, though with the fresh taste and the sweetness, i highly doubted it was one and the same as the striped bass my b. fishes for every summer. 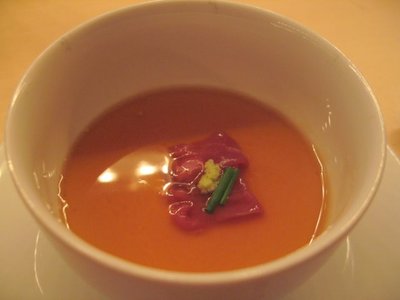 foie gras chawan mushi, fresh wasabi gratings
this was one of my dining companion’s favorite dishes.  the only way i can describe it is like creme caramel, but savory, with foie gras on top.  the whole dish was very mellow, with the fattiness of the foie gras countering. 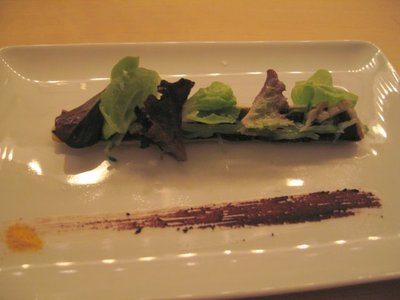 rock trout with olive paste and yuzu sauce
though you can’t really see it, the rock trout was one long strip, not unlike a piece of king crab leg that’s been de-shelled.  dipping it in the powder and taking some of the olive made for a very interesting contrasts of tastes, as yuzu is citrusy and olive is very salty.  the rock trout itself was very meaty; if served in a larger portion, i would call it steak, that’s how dense the meat is.

i asked him during a lull if i could take a picture.  ever serious, he didn’t smile but raised his hands up in the double fob salute.  i should’ve said ‘say sashimi!’ to him! 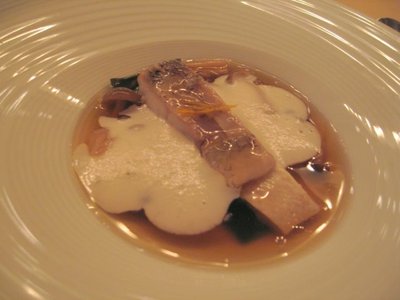 kuru-mutsu nabe with exotic mushrooms and kabu cream
i almost expected to be disappointed by this dish because it almost looked like a fish my mom cooks.  however, after one bite it was clear that this was no ordinary fish- nothing else had been, i don’t know why i expected this one to be so.  this had a very good bite to it, with delicious mushrooms underneath.  we were not yet full, though. 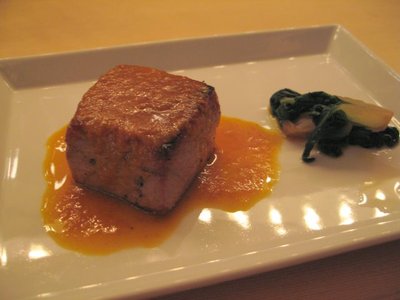 “ochu” toro with a spicy yellow pepper sauce and bok choi
amusingly, when the waiter asked morimoto-san for the type of fish, the waiter first said, “chu (best) toro?” and morimoto-san shook his head.  next the waiter tried, “oto (second best) toro?” and again morimoto shook his head, finally shrugging and laughing, “o-chu toro” as a compromise of the names, which leads me to believe this was an in-between cut- not quite the top cut, but better than the second best cut.
i do not like overly spicy things, and was almost afraid to try this from the scent wafting up from the fish.  it looks like beef, doesn’t it?  when i finally braved it and put a piece in my mouth, i literally left this plane of existence to float to another one.  this was heaven, happiness, in my mouth.  it melted smoothly and went so perfectly with the sauce, i couldn’t believe it.  yes, it was spicy, but not unbearbly so; the sauce did not mask the flavor of the fish but instead brought it to a new level previously unattainable.  this was seriously the best dish, in my opinion, of the night.  i would go back for this again and again… and again. 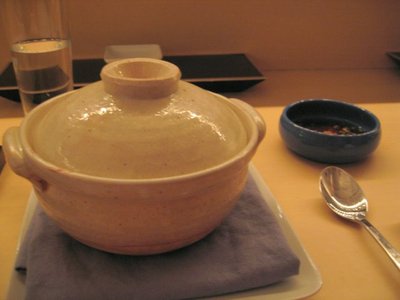 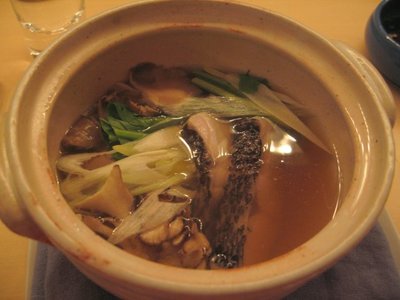 white tilefish with shumeji ankanke and abalone shabu shabu in a hearty broth, various veggies
the fish had little of its own flavor, though the broth was extremely subtle yet wonderful to the palate.  the abalone and duck interspersed throughout lent another dimension to the dish, and though i normally do not eat scallions like so, they were tender and sweet, bringing the dish together perfectly. 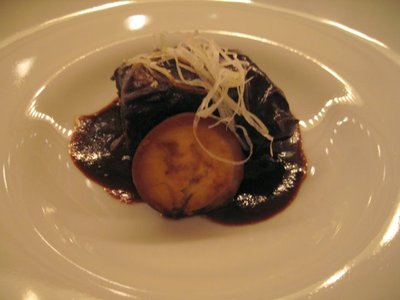 wagyu beef shortrib with red miso reduction and a poached egg
i’ve been told that wagyu is the new kobe beef.  i’d actually had kobe beef shortribs in a similar style at morimoto philadelphia, and found this dish to be extremely similar, but better.  the meat was fork tender- we didn’t need the knives provided- and the sauce an excellent complement to the texture of the beef; soft, juicy, with a strong sweetness of a sauce to go with it. 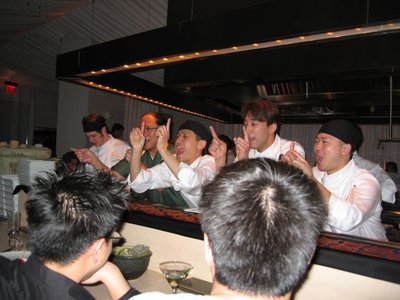 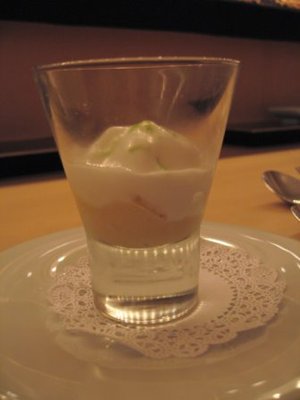 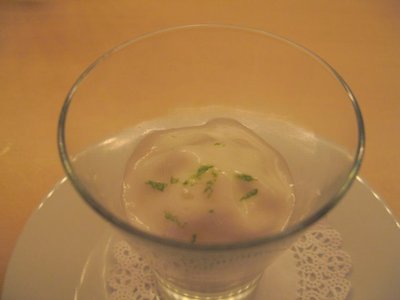 fizzy lime sorbet with lemon meringue
cleansing of the palate- our pre-dessert.  the fizzy sorbet was really interesting. 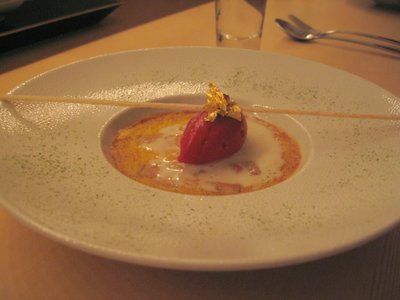 rhubarb clafouti with strawberry sorbet and 24k gold flakes
we came to the conclusion that morimoto was trying to poison us; first with fugu, then with liquid nitrogen (which is not an FDA approved food substance!) , and now with rhubarb, which, when raw, is extremely poisonous.  of course, this was fully cooked, and an intriguing end to a fantastic meal.
**clafouti is like a thicker crepe/thinner pancake, made from a batter, not a dough, despite its tart or custard like appearance. 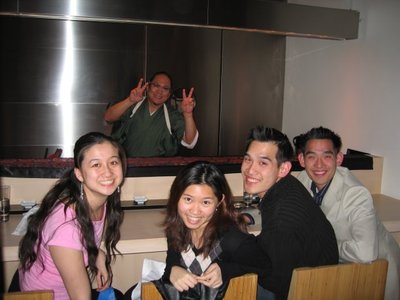 us sitting at the special omakase bar.  we had the best seats, right in front of him.

bliss.  if you can afford it, hightail over there before he gets tired of doing it and/or opens a new restaurant!