Although it’s been a year since I took my best friend to Norma’s to celebrate a milestone in her journey to becoming a doctor, I have thought about returning to this place many a time; particularly to bring my b., who adores orange juice and drinks it as though it were free flowing out of the faucets, and who would certainly appreciate the tall and very freshly squeezed glasses of juice at Norma’s.

I must note here that in the numerous reviews I’d read, they say that the OJ is delicious but $7 a glass.  Our waiter swung by to refill our glass a number of times, but I do not recall being charged for more than one glass each.  As I’ve only been here once, I can’t say if that was a mistake or the norm, but if I do go back, I will definitely update this to reflect (since I’m sure my b. will have something like 5 glasses of the OJ, and if we get charged $35 for it, I will be very pissed off). 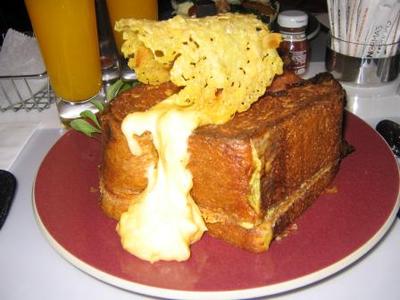 The first thing to note is that Norma’s is in the lobby of the Parker Meridien Hotel.  One might say that creates an atmosphere conducive to people watching; personally I found the space a little to open and inviting of spectators to watch the diners eat!  It was a noisy space, very breakfast-diner-like, but not necessarily in a bad way; it took the place from snooty to casual. 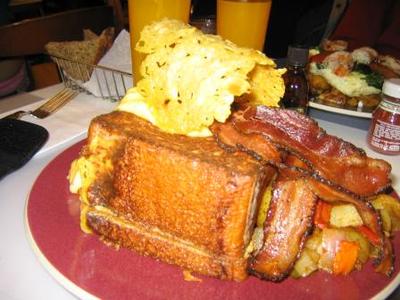 The menu is a bit overwhelming at first, and I finally settled on an awkward choice- Super Cheesy French Toast.  Only awkward because I normally do not order French toast, and my first time at (breakfast) restaurants (or places I intend to go to more than once) I like to stick to classics/things I’ve ordered at other comparable places so that I can compare more easily/fairly.

When they say Super Cheesy, they mean super cheesy.  I like cheese and this was way too much for me.  My best friend hates cheese; I wish I’d gotten the look on her face on camera!  So, at a casual glance, clearly this is just a really thick piece of French toast with cheese melted on top (and a fried piece of it curved neatly over) and a thinner piece underneath, right?

WRONG.  I was merrily eating my way through this (the applewood smoked bacon and potatoes were really good, actually) with the hot maple syrup they provided, when I realized that each bite was getting progressively cheesier.  I’d wondered briefly about the thick slice and the thin slice, but now I realized their purpose. 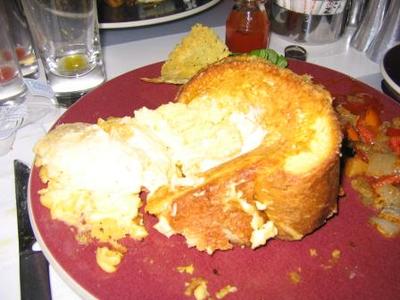 The thick slice was actually hollowed out and stuffed with cheese, with the other slice acting as a stopper or base.  If you take a look at the picture on the left, the mushy looking stuff is cheese that I pulled out of the center.  I enjoyed this, but the very center is way too much cheese.  I almost threw up when I saw how much cheese there was, and stopped eating.  It was pretty disturbing.  Don’t get me wrong- it was delicious, but at some point, your arteries start crying and begging you to stop the abuse.

I washed this all down with a few glasses of the terrific OJ, myself.  I wouldn’t order this dish again, but I did enjoy it and I suspect anyone who really likes cheese would like it as well.  But come on- a center completely of cheese, dipped in hot maple syrup- how can you not feel guilty and/or disgusted with oneself??? 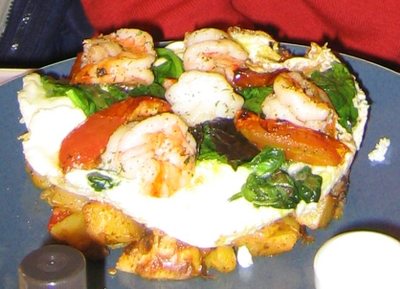 My best friend opted for something much healthier: an egg white frittata, shrimp and roma tomato and spinach.  She really enjoyed her dish; she said it was fresh and very healthy tasting.  She cleaned her plate, unlike myself.

Yvo says:  Brunch for two people topped $70 with tip.  I think that’s a little excessive regularly, but for a special occasion, it is well worth the price.  The service is rushed, though not rushing the diner, just that the servers seem in a hurry all the time.  There are plenty of servers with pitchers of OJ (and coffee pots) coming around- I think that’s their sole job- so you rarely have to ask for a refill.  I didn’t like that it was in such an open area off the hotel lobby, but that might be your thing.  Definitely get reservations, because while we were waiting for our reservations (we waited maybe 5 minutes?) there were tons of people coming in trying to get a table, and the wait was an hour.  Norma’s is only open for brunch- no dinner, no lunch.  Enjoy!