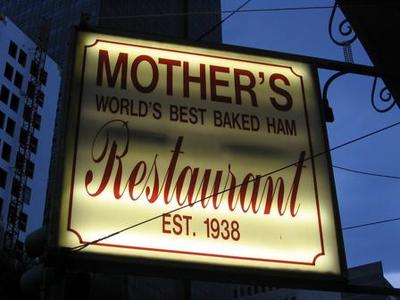 Mother’s isn’t exactly- ok, it’s not even in the tourist district.  It’s on the edge of the business district, which, lucky for us, meant it was only a block or two away from our hotel.  Walking distance.  Which was good because we went our first day in NO, and by the end of the trip a few days later, we had enjoyed it so thoroughly that we were craving it and went back again. 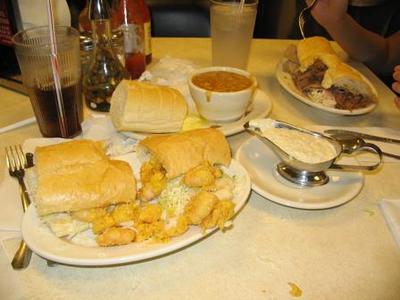 Either way, we were luckily prompted to go there by a friend who’d been to NO a few times before and had thoroughly enjoyed it.  We’d probably not have found the place on our own without some research or talking to the locals, but thank god it was suggested!

No matter where your hotel is, Mother’s is worth the cab ride and the long wait.  A word of advice; if you go for an early, or late, dinner, you will avoid the rush.  I believe we went the first night around 8 or 9, perhaps the same again a few nights later, but I do remember not having to wait too long, though there was a line, and pictures found through Google will tell you that sometimes the line stretches around the block during peak times. 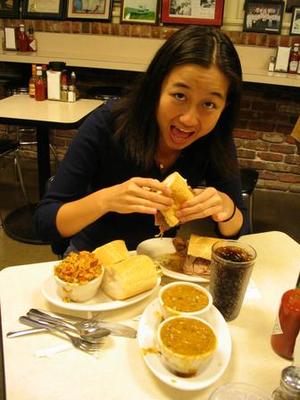 Notably, we had Ferdi po’boys, which were fan-f*cking-tastic even though I don’t like and don’t eat HAM.  We also had (these are seen in the picture of me pigging out) jambalaya or gumbo – which both of us discovered, to our dismay, well, we both don’t like (andouille) sausage, and we overordered so we didn’t even eat that, actually, and wound up chucking it out- bad, wasteful girls!  That is the dish directly to my right, with the hunks of bread on the plate.  The dual bowls of yumminess is etouffe (crawfish) which is basically a gravy/stew type dish served over a portion of rice, completely covered, and damn, this was delicious.

In the top picture, from our second time, I opted, despite adoring the Ferdi, which was what all the reviews suggest ordering, for a fried shrimp po’boy, since Nawlins is pretty well known for its deep fried seafood as well.  I ordered the etouffee again because I liked it that much, and if you look closely enough at the picture, you’ll see that I took a bite before I realized that I wanted to take a picture.  And my travel companion is already eating her Ferdi po’boy in the top right of the picture, without regard to my flashing camera, hahaha. 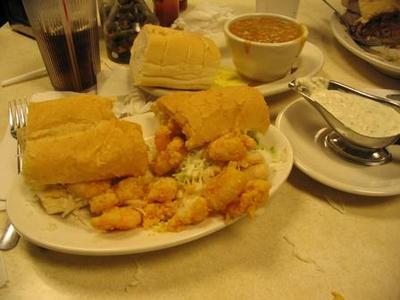 I have to say, in the time that passed between our first day and last day, I’d eaten both etouffee and shrimp po’boys at other places and I did NOT like the etouffee at other places, and the shrimp po’boys were only alright.  Mother’s did a good job with the po’boy but I prefer their Ferdi much more.  Their etouffee, however, was excellent and my mouth is watering thinking about it right now, even though I just finished lunch and am really full.

Yvo says: DEFINITELY GO HERE.  I don’t even want this review to end.  It was really good, I recommend it with full marks for Nawlins distinctive food.  You CANNOT get this level of Nawlins food anywhere else; all the places in NYC that supposedly ‘taste just like NO’ come nowhere near this place.