This should probably be filed more under my personal blogging site, but hell, let’s have some fun with food, writing and my life.

Those of you who know me – or follow me on Instagram, or Twitter, or Facebook – know that I love Bobwhite for fried chicken. And that I consider myself a fried chicken expert, having sampled it around the country and everywhere that I can around NYC (yes, I’ve been to Birds & Bubbles, but I haven’t yet posted about it — it’s coming). Bobwhite hits all the right notes for me, and I visit somewhere between once a month to twice a week, depending on how life is going. By right notes, I mean it’s in the right price range, it’s near a lot of other places I like for before or after drinks, the place is super casual and laidback, and though sometimes it’s too crowded, most of the time I can squeeze in at the bar and be perfectly happy eating delicious fried chicken, alone or with a friend or two.

I’ve taken a number of dates there, entirely because how a person eats fried chicken will likely tell me everything I need to know about how we’ll get along. Use a knife and fork? Hold it delicately and eat gingerly so as not to make a mess?

It’s not a match.

Yes, I use my hands and eat with gusto; there’s only one way to enjoy life, and that’s full force, all up in your face. Smear some chicken grease on your face on a date? So what? It’s fried chicken. ENJOY IT.

In late December, I agreed to a date with someone and we decided to meet for oysters at Upstate (which has a great oyster happy hour). Unfortunately, the wait was upwards of an hour, so as we mulled over options for our next move, I said excitedly, “Can we go to my favorite fried chicken place? It’s a few blocks away.”

Shimono, as we’ll call him, agreed readily, and we walked over.

After we were seated at Bobwhite, snagging the very last available seats in the restaurant, he looked over the menu, flipping the single sheet over several times as I sat quietly. I already knew what I wanted. I was here for one thing. He looked over the menu a few more times, then turned to me and said, “I don’t really eat fried things… is that all they have here?”

*deep breath* I am not a generally patient person. I know this is something that I should probably improve about myself, but I looked back at him blankly. Honestly, I’d asked if we could go to my favorite fried chicken place. The time to ask me if there was anything else on the menu was probably then, not after we’d been seated and given water.

I paused and finally said, “I’ve heard the salad here is really good, but I’ve never had it. Their sandwiches are pretty good – I’ve had the pork chop sandwich and really enjoyed it.” 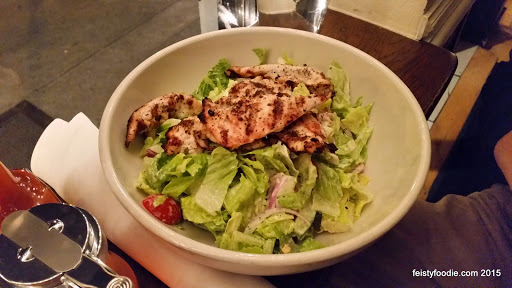 The salad comes with your choice of grilled or fried chicken. The answer is obvious what he should have chosen, but the photo tells a different story. He also waited until the server came over before questioning, “what’s green goddess dressing?” and “no cheese, please.”

Did he not think to ask me – the food writer with whom he was on a date – what the dressing was? No.
Also, no cheese? Seriously? If I was at all a more self-conscious eater, I’d have been crying inside and switching my order from fried chicken to a salad myself. Thankfully, I don’t order anything I don’t want to. That’s not how I roll. 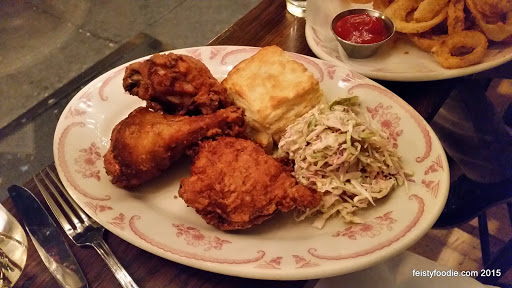 I was not deterred from ordering a fried chicken supper for myself. Nope. I happily nommed away, though he picked at his salad so slowly that I just wanted to go home. So I ate one piece and packed the rest to go – no worries, Bobwhite is so delicious that it’s still good cold (duh) or re-heated the next morning for breakfast. Seriously. It’s delicious. There’s a reason it’s my favorite place.

And NO ONE is going to ruin MY fried chicken place for me. Bad dates or not. 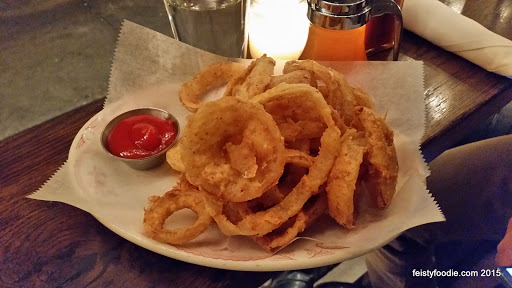 The onions rings here are legit delicious, and a special that’s not always available. When I saw them being offered, I quickly added that on… only to find that Shimono doesn’t just not eat fried things, he doesn’t like onions.

I ate half of these myself, and Bobwhite will tell you that they don’t travel nor pack well, but I stubbornly took them home as well. Whatever, they were crispy, delicious, and onion while at the place… and a little soggy when I got home. YUM. Either way.

I was so eager to leave that I paid while he was in the bathroom, surprising him. As I walked quickly away from the restaurant towards the subway, he tried to pull me into an alley to kiss me. I mean, literally, what? I yanked my arm away from him and said “What are you doing?!” and he said, “trying to find a quiet place to kiss you!” I responded by telling him I was going home, and he said “Oh, I was going to ask you to come home with me,” and when I said “no, thank you,” he replied – lord save me – “I wouldn’t make you do anything you weren’t comfortable with!”

Thanks for telling me you weren’t going to rape or assault me.

I’m still not certain we were on the same date. I don’t know of anything I did or said that could have made him think either of those things was at all a possibility. In fact, several times while I struggled through conversing with him, I actually asked, “Are you high?” which, if you know me, is my current favorite way of telling someone politely to shut up or pay attention to what they are saying because it doesn’t make sense.

This was laughably awful by this point, but it gets better. I cannot make this up, though I wish desperately that I was.

He texted me that night and asked when he could see me again, to which I did not respond. I don’t know if he was high when he asked, because he clearly thought he’d get a positive response to that text.

You see, when we originally met, he’d told me that he was visiting from Vegas, deciding whether or not to move to NYC. During our date, he’d said, while looking at me dreamily, that he’d made up his mind to move here. I’d gotten extremely uncomfortable and told him not to make that decision based on me. (Though it’s true, two different people have moved across the country at my urging – one to NYC, one to SF – I don’t want that responsibility anymore.) Though he lived in Vegas, he had a 646 number, which I found odd and questioned him about but he said he had a few different numbers. Okay, whatever. Doesn’t have Facebook? A lot of people don’t. It’s not that weird. Right?

Well, about a month after our date, he called me. I didn’t pick up, and he called again. Nope, I had nothing to say to him. Five minutes passed, then my phone rang again from a different number that my phone didn’t recognize. I still didn’t pick up. I texted a friend who lives nearby and expressed my concern that this person kept calling me every 5 minutes from different numbers… Shimono literally cycled through 3 different phone numbers, calling every 5-10 minutes. My friend wisely said, “Pick up the phone and see what he wants, then he’ll stop calling.”

When I picked up the phone, Shimono – which is what he’d told me was his last name – introduced himself. “Hi… uh… we went out last month?”

“Yes.” Meanwhile, I’m thinking, yes I know who you are.
“So um…”
“Can I help you?”
“Well…” he stumbled through explaining that he’d sort of lied to me (including about his name, so I don’t know what Shimono is). Nothing should surprise me anymore! Apparently, he had a girlfriend. Which, after some thought, kind of made sense. Supposedly they’d been on a break when he and I met. Whatever.
“What’s this got to do with me?” I was pretty bored of all of this.
“Well… she… might be calling you.”

I have a long history of people’s ex girlfriends (by “people” I mean “guys I’m dating”) and girlfriends-after-me contacting me and causing me problems. I nearly threw the phone down to get on a subway and find this f*ckface and beat him.

“What?”
“She… saw some text messages between us and might be calling you to ask what happened.”
“WHY DID YOU GIVE HER MY NUMBER”
“I didn’t! She saw it on my phone! No!”

Our text messages, by the way, were completely innocuous. I never sent anything crazy, though he sent me a couple that were about how much he liked me and how pretty he thought I was.

“What are you going to tell her?” The worry was evident in his voice.

That was when I lost it.

“ARE YOU FREAKING KIDDING ME?”

I may have used a couple of other choice words, but… why was he asking me what I’d tell her? Literally nothing had happened between us. I pushed him off me when he tried to kiss me, and when he grabbed my behind, I shoved him. I hung up on him after a little screaming, my heart pounding with anger and agitation.

… and she never called me.

For that, I will always love Bobwhite.

***for those that don’t know me, I’m really not this judgmental about what another person eats. In general, I do not care what someone else does or does not eat, unless it negatively affects what I eat. Also, he should have been upfront about his not wanting fried foods, and I would have happily and easily found an alternative. We would never have traveled down the road of me judging him for eating a salad and asking for no cheese. However, that happened, and then everything else that happened just combined to irk me beyond hope. Ah well, c’est ca…