I cannot emphasize enough just how wonderful a hostess Jenn was; my last night visiting she planned to have dinner with her brother, of whom I’d heard a lot but had never met. He and I share a deep love of all things food, along with a rather sparky personality and an affinity for saying “fair enough” when there’s nothing else to say (something we discovered over dinner). But that’s not what made her a wonderful hostess; concerned that I was getting seafood’d out or tired of the same ol’ Louisiana cuisine, she proffered some other choices for me. Unfortunately/fortunately, the place I chose – a Caribbean/Jamaican place – had an over-an-hour wait, and I just was not going for that on that super rainy night, so we wound up going to Drusilla, where her brother had recommended quite a few times for fresh seafood.

Yes please! I should have mentioned it’s hard for me to get tired of seafood. 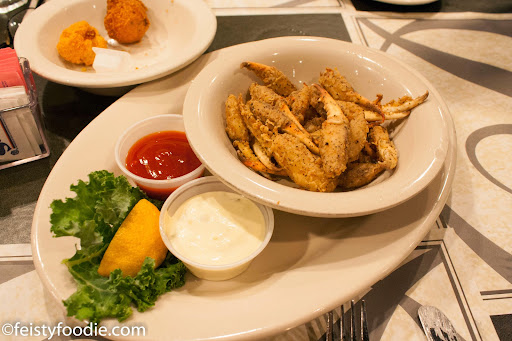 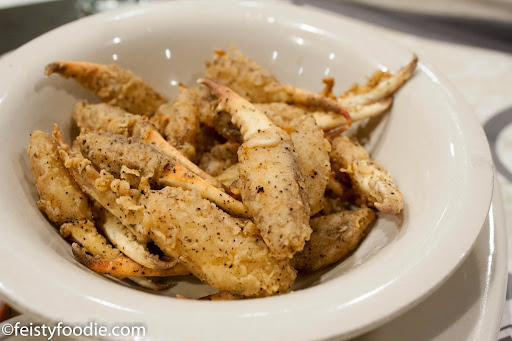 An order of “crab fingers” to start; de-shelled save half the tip, then fried, these were a nice little treat. 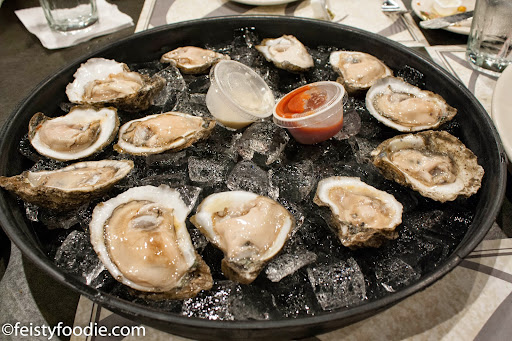 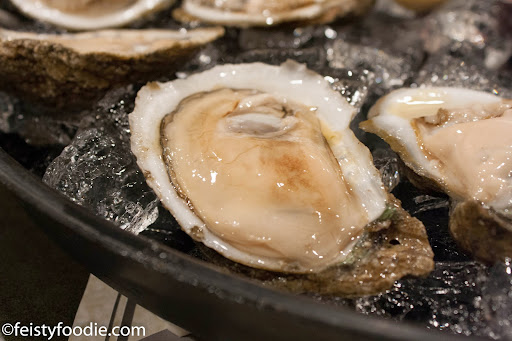 No lemon came with the dozen oysters I split with Jason, but I took them from another plate for that. Our server was totally stoned the entire time. That seemed to be a common theme while I was down in NOLA/BR. In any case, these were large, meaty, and again, shucked in such a way that I needed to use my fork to finish the job so to speak – the adductor (I think?) muscle was not loosened so I had to pry my oyster meat from the shell. The exterior of the shells were muddy, so I didn’t tip them to my mouth to slurp; nor did Jason. At this point, I assumed that was the standard – to not try to ingest the lovely oyster liquor – and c’est ca. I found gulf oysters to be tender, sweet, and huge. I tend to be a fan of smaller oysters – west coasters – but these were satisfying in a different way.

(Also: on the menu here they also offered charbroiled oysters, and listed explicitly that it would garlic, cheese and lemon butter on them.) 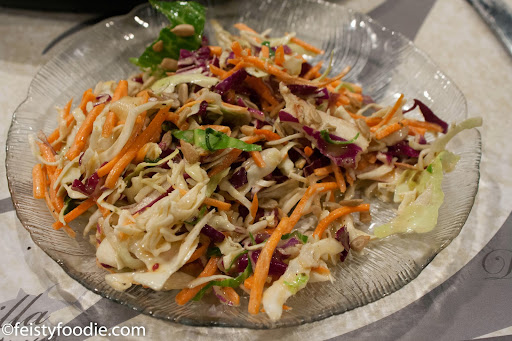 The cole slaw was very simply dressed and quite delicious. Love how big of a plate they gave, too – I need vegetables! 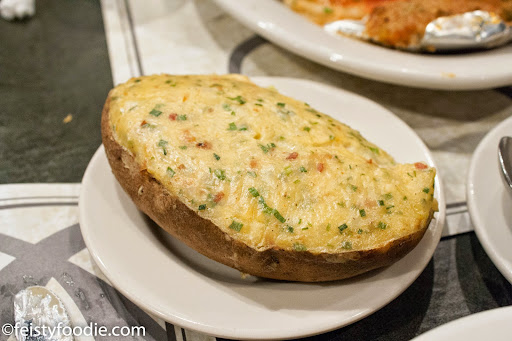 Jenn’s stuffed potato made me insanely jealous. I should have gotten that. I still regret not getting it. Hahaha. 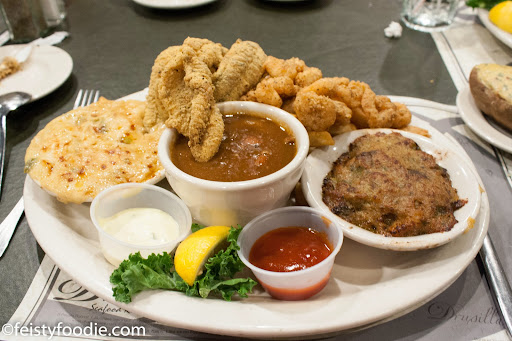 So that I could try a little bit of everything, I ordered the On the Bayou “A Taste of Louisiana” – which had shrimp au gratin, fried catfish, popcorn shrimp, seafood eggplant casserole, and a cup of seafood gumbo. 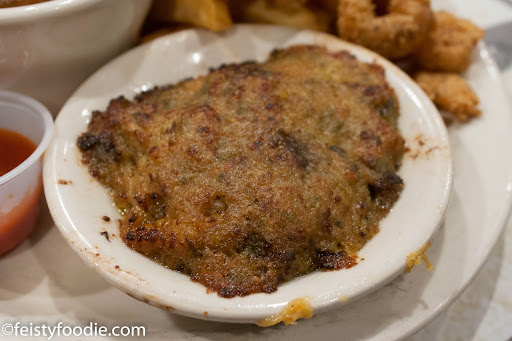 The seafood eggplant casserole was lightened by the eggplant, and quite tasty. 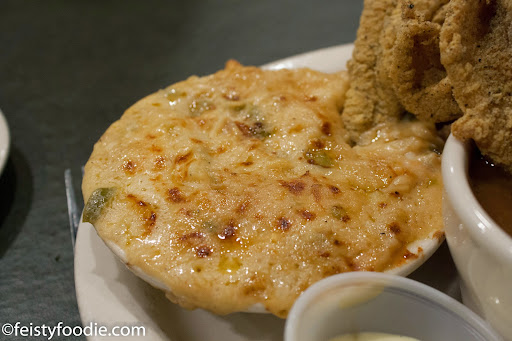 The shrimp au gratin was at the other end of the spectrum from light: heavy, cheesy, but speckled with bell peppers that lent a very good flavor to the cheese/cream mixture. I liked that combo, but should have asked for something besides shrimp since I don’t care much for shrimp. 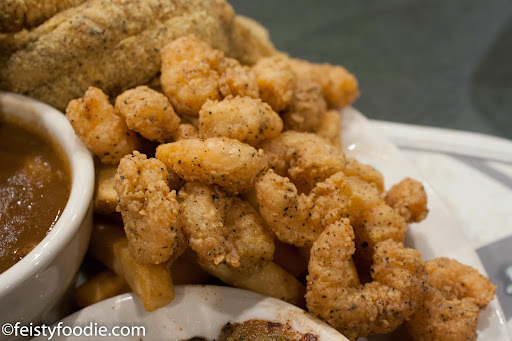 Popcorn shrimp, which were fried nicely and seasoned well. Great with tartar sauce! (When I was a kid, popcorn shrimp at Red Lobster was one of my favorite things to eat. Then I discovered fried flounder and that was that for popcorn shrimp.) 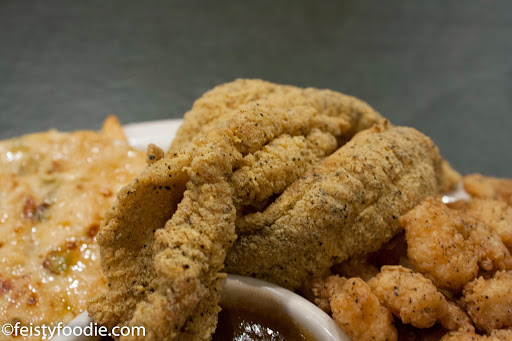 The fried catfish bore a very similarly seasoned crust to the popcorn shrimp, but I was getting really full. Haha, can you blame me? Fried foods make me hit the wall very quickly, though I will say nothing was greasy or very oily, so I had a bit more to eat than I might were they to be heavier. 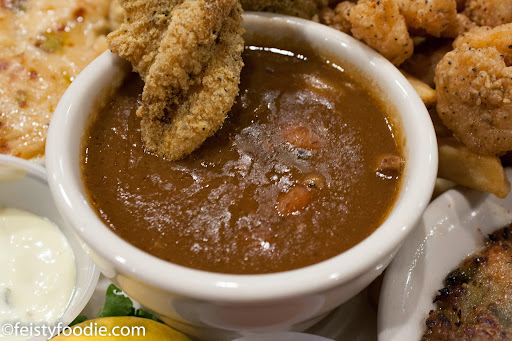 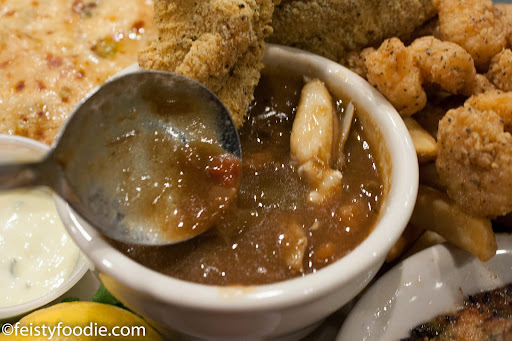 The seafood gumbo was extremely rich with seafood taste, and had a TON of seafood in there. Multiple crab fingers (complete with shell, which made for messy eating), and chunks of other seafood graced my small cup that I couldn’t eat more than a few bites.

Final tally, since people like to know: I finished the shrimp gratin and the eggplant casserole. The rest of it went home with us.

Another lovely meal with Jenn, this time with the addition of Jason. Thanks for showing me around your area and gorging on seafood with me everywhere. One more New Orleans post to go… sadface!

Point to note: at nearly every place we went including this one, servers automatically asked if we wanted separate checks, something that simply doesn’t happen in NYC. I’m not sure I’ve ever been asked in NYC if I want a separate check, actually… and I don’t recall ever asking for one within the 5 boroughs (maybe when I was younger?). I’m not sure if this is because a lot of people split appetizers or what here? but that was definitely something that threw me each time it happened. It did make things a little easier, though – no math needed!

I would definitely go back to Drusilla to try other things! The space was huge, too, like a big corporate banquet dining hall… interesting.