This isn’t explored too much here, but I love to entertain (complete with awful photos of me). So when last minute plans fell upon me and I realized I was going to have a dinner guest one night last week, I thought quickly and realized that my pantry is well-stocked enough that I only had to buy a few things and I’d have a fab spread in a jiff. 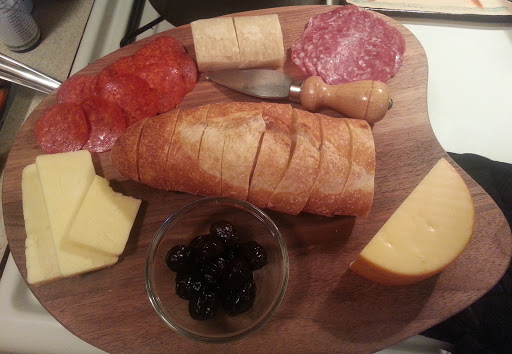 For a starter, a meat and cheese platter is generally an easy way to go (unless you’re entertaining vegans… I don’t know how to entertain vegans). The only thing I had to go out of my way to purchase was the baguette – which thankfully I have an awesome local place to get. As for the rest, …

(I’ve tweeted often about my “cheese problem” – hey, I don’t think it’s a problem – but I generally have somewhere between 10-12 different types of cheese in my fridge. (I also usually have about 8 lbs of butter.) I blame this partially on having 2-3 cheeses that I don’t like or don’t want to eat often as my baseline cheese, then 3-5 that I eat frequently and as a result, replace often, also some that I just use a lot, and then the rest on being a food writer and people just sending me cheese constantly (along with other food, it’s not just cheese!). Oh, and I count “shredded” as a type – and keep 2-3 different kinds in there as well, for quick meals.)

Though you may not be quite the same as me with cheese, it’s easy enough to start keeping a few cheeses on hand that you like and work well for the above. Just in case you’re ever faced with a last minute entertaining need… and because cheese is delicious.

Also a staple in my fridge? Pickles and olives. I happen to like oil-brined olives, and have a super cute local place where I shop on weekends (and if I’d gone more recently, I’d have also had some of their homemade dips and spreads to add to this platter, turning it into a complete meal!).

Finally, cured meats. A pack of pepperoni, some dry sausage that you can slice up when you need it, both of those can keep quite a while in your fridge. Or you can just eat them and keep replacing them…

So, on the above platter, starting from the top left going clockwise: pepperoni; 12 year aged parmesan; Applegate Farms genoa salami; smoked gouda (which I’d just happened to buy a few days prior but hadn’t cut into yet); oil brined olives; aged raw milk cheddar from Vermont; and in the center, baguette from my local boulangerie.

Not pictured – on the side, I had truffle honey and quince&pear preserves (from Eataly). SO GOOD. 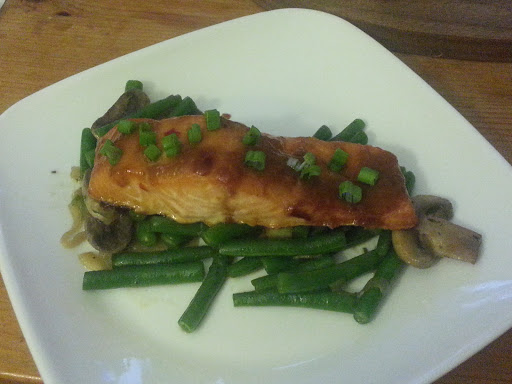 For the main course – this is a little more complicated to whip together at a minute’s notice, but still doable. I always have frozen meats and fishes in my freezer – specifically, various chicken parts that I buy on sale (chicken quarters for 69c a lb? perfect for roasting and using for chicken noodle soup when I’m sick, or roasting for chicken salad – and I always have boneless skinless chicken thighs for whatever strikes my fancy) and salmon.

Please don’t skin me alive or turn this into a food politics post – but sometimes I turn a blind eye to the origins of my food. Salmon for $5.99/lb at my Chinese supermarket is hard to pass up in favor of salmon at Whole Foods for $13.49/lb. I sometimes buy from HKS (Hong Kong Supermarket), and since they sell in about 1.5-2 lb. slabs, I cut it into pieces and freeze individually in sandwich bags.

However, the above was actually from the Saucy Fish Co., who’d just kindly sent me products from their recent launch into the US market. Two salmon filets with a packet of this glorious sweet chili glaze alongside; I took the fish out of the freezer and marinated the fish in there with some scallions for a few hours before roasting it for about 12 minutes at 350. IT WAS DELICIOUS. The scent was intoxicating and when I finished my piece, I was sad that I’d decided to share with someone else. Of course, if I’d not had Saucy Fish in my freezer, I’d just as happily roasted salmon with a bit of dried dill and lemon – pantry items – or crusted it with walnuts. Or any number of my go-to salmon recipes… so build your own repertoire of recipes you feel comfortable with 🙂 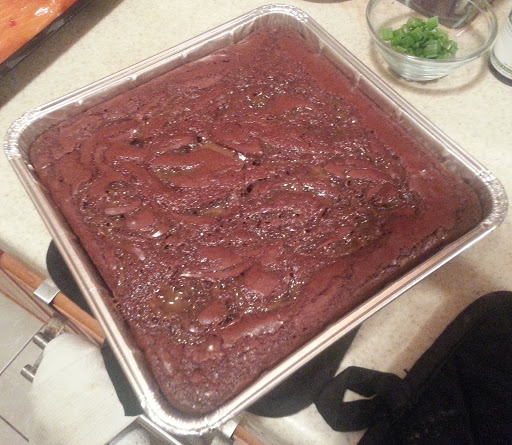 Finally, the easiest dessert in the world? A box mix of brownies. Duncan Hines salted caramel brownies! These require an egg, vegetable oil, and a bit of water, beat up in no time, and bake in about 35 minutes. Don’t be ashamed to rely on a good brand of cake mix or brownie mix if you have a favorite – these came out dense, fudgy, and were a big hit. Keep a box or two of your favorites on hand in your pantry, and it’ll make last minute entertaining super duper simple!

(Alternatively, if you’re like me and always have eggs, flour, and Nutella, and prefer making something from scratch – well, it helps to have a super duper simple literally 3 ingredient delicious recipe to rely on. Namely, Nutella cakes. YOU’RE WELCOME. Which I probably should have made as my guest is a HUGE fan of Nutella, but then he seemed to love the brownies so I guess it didn’t matter.)

So, those are my secrets to making last minute entertaining super simple. That and have a plan of action!

(Basically, someone suggested we follow up on previous plans we’d had – to watch Fiddler on the Roof at my place. Since it was a weeknight, and the movie is 3 hours long, I decided I’d make dinner… even though we discussed it at 6:30p and made plans for the following day at 7pm. So I had to scramble a little bit, but then realized I could just as easily throw together an appetizer and dessert, and decided why not?)

My plans of action lay out specifically what I need to do and in what order, so, for example, mine explained what to do after work the next day (after I’d already taken the fish out of the freezer to defrost in my fridge):

(And the part I didn’t write out – I planned on snacking on the meat&cheese platter while watching the first half of the movie, and then cooking the main course during intermission… serve, and dessert whenever after that.)

So as soon as I finished with work, I put my plan into action and took it from there. Everything came together beautifully, and when my doorbell rang, I’d already put out the meat & cheese platter and was pouring brownie batter into a pan. We started on the meat&cheese platter after popping open the bottle of wine my guest brought.

Entertaining 101 – tips to make your life easier when you’ve got a last minute guest.

Have any tips of your own for last minute guests? Share them in comments!

Though I was in no way obligated to mention them, I will say that I received the Duncan Hines salted caramel brownie mix as a press gift, as well as the Saucy Fish salmon. I don’t think either of them knew I was going to post about them.

« La Boulangerie
The First Time I had Thai »