A few weeks ago, the Stallion mentioned Little Prince to me as a cute little French bistro type place with a stellar French Onion Soup burger that he’d had, long ago, and thoroughly enjoyed. Actually, the conversation started when we were eating at a restaurant I didn’t blog, and he ordered French onion soup, and I admitted I’d never had it except that one time I made it (and didn’t care for it that much, so never made it again). So one Saturday he had off, he made reservations and that’s how I found myself at this very tiny, cramped, tables-on-top-of-each-other-wow-it-is-loud-in-here bistro. 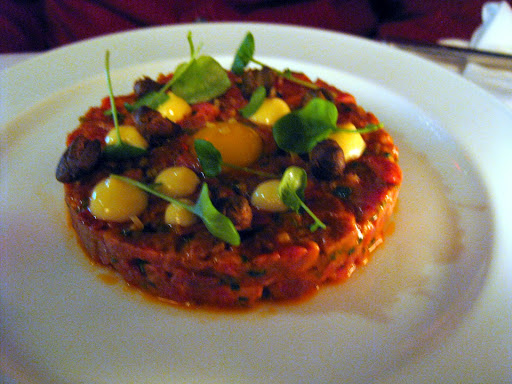 The Stallion ordered steak tartare to start; I found the whole thing extremely peppery, but he loves pepper, so he enjoyed that far more than I did. The texture of the hand cut meat was quite chunky, and pleasant… unfortunately my tongue couldn’t get past the excess pepper. But that was OK because not only was this his appetizer, … 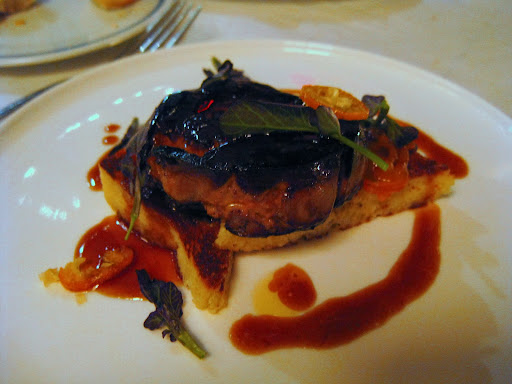 There was foie gras on the table. The Stallion had never had foie gras prior to that night, and when we heard it was a special of the night, we had to get it. I was especially excited to share in his first time as this was a piece of foie gras, not terrine or mousse which would have been far easier to get somewhere. You’ll have to forgive me – I wasn’t planning on blogging the night, but he seemed disappointed I hadn’t brought my dSLR so I took out my point&shoot (thus the low quality of the photos), but didn’t take out a notebook to write down all the details. Candied kumquats were on there though, and it sat on brioche – a slightly sweet, slightly tart syrup of sorts drizzled all around… let’s just say that cutting a bite of the foie gras with the buttery brioche, a bit of candied kumquat… this was a heavenly bite. Oh yes, it was… I was extremely happy to share this with the Stallion, knowing his first experience was going to be pretty damn good – and he enjoyed it thoroughly. Even though I only gave him 2-3 bites before inhaling the rest myself. Oops. Sorry. Ahem.

Seriously those candied kumquats were pretty ridiculously good. They cut through the rich fattiness of the foie gras without detracting or trying to take center stage… just lovely. 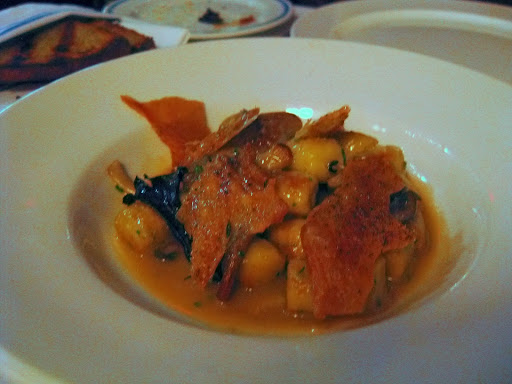 After a few minutes of waiting between courses, and pleasantly chatting about our food, this landed on our tables: gnocchi with wild mushrooms. I say “landed on” because we didn’t order this – not-our-original-waiter brought it out and said “compliments of the kitchen” – it’s still unclear whether the kitchen messed up our main courses and sent this out so we would have something to eat while we waited, or for some other reason entirely (I’ve been “recognized” at restaurants in the past; from Twitter, FourSquare, or sometimes people just knowing what I look like). Regardless, we were both happy it happened – this is a dish I would never, ever order for a multitude of reasons (gnocchi is rarely good for me; gnocchi at a French place? forget it), but the gnocchi was quite lovely… the sauce was great… and the mushrooms were insanely delicious! while the cracklings on top were awesome. I think pig skin… just added this intense crunch factor with the pillowy gnocchi… so good!

Our original waiter came over about 5 minutes into us eating this and looked down and said, “Um, why is this on your table?” and walked away without giving us a chance to respond. But more on his extremely bizarre behavior at the end. 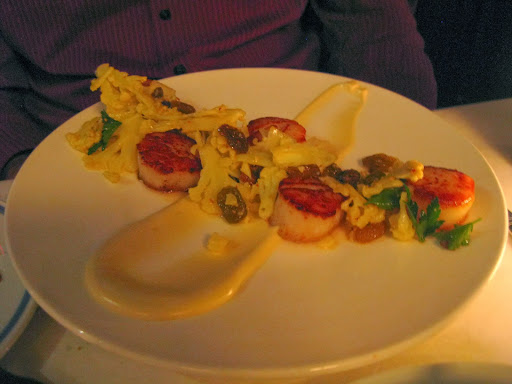 For his main course, the Stallion chose scallops, which he enjoyed. I thought it was pretty tasty – I tried the tiniest bit of one – but I was focused on my own main course… 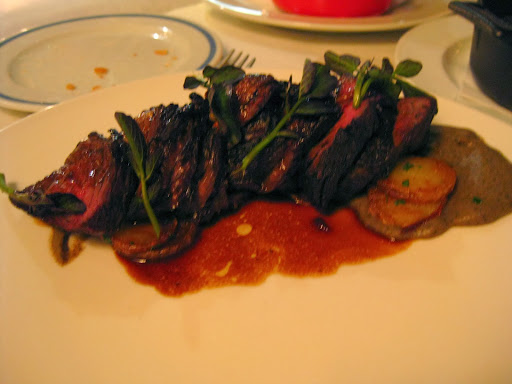 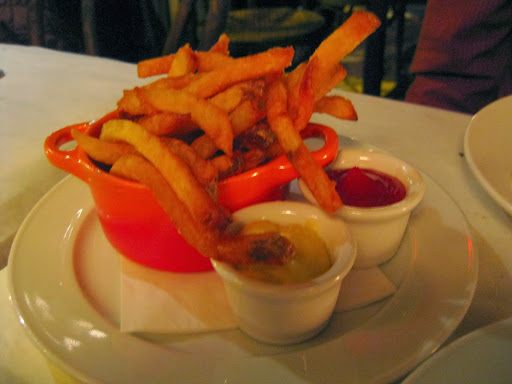 Steak frites! The steak was cooked perfectly to my specification of medium rare – and if I had to guess, was probably the reason we got the gnocchi (my assumption is that my steak was originally overcooked, so they fired a new one and in the meantime gave us gnocchi to keep us occupied). The potato slivers were unnecessary but delicious, and that bone marrow sauce was out of this world delicious! The portion was on the large side, so I wound up taking about half the steak home… waste not, want not! but I really enjoyed it. They’re not afraid of salt here – nor am I – so everything was seasoned very well.

The frites were also super tasty – crisp and delicious dipped in the aioli on the side. Yeah, I know: aioli is just a fancy pants way of saying mayo, so I don’t feel like such a horrible fatty for dipping my fries in mayo. Whatever, I’m part French, YUM. 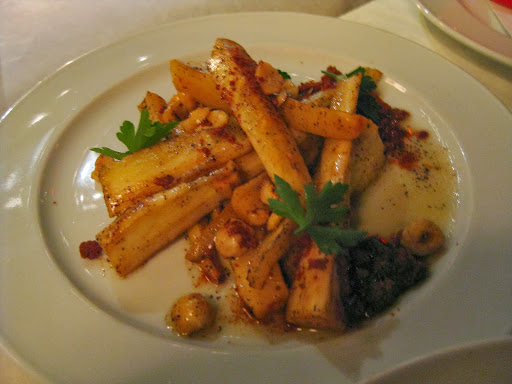 Roasted parsnips for him… which were tasty, and tossed with hazelnuts 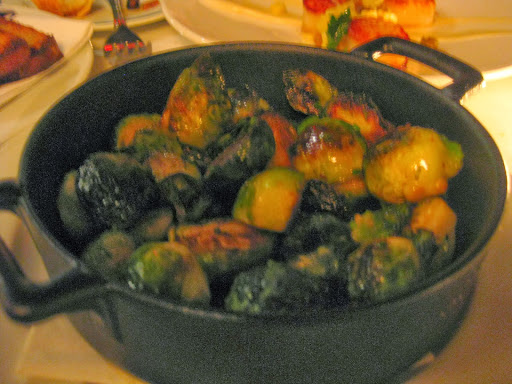 Brussels sprouts, roasted in duck fat, for me, which were also very good, seasoned liberally, and made for delicious leftovers in later lunches.

Overall, we had a very tasty dinner at Little Prince, if a little thirsty – everything was heavily salted, which I enjoyed, but those who are more sensitive to salt might not appreciate it as much. Particularly when your water bottle goes empty for most of the meal… and you’re never offered another drink…

But let’s start from the beginning regarding service. We arrived and were promptly seated against the wall, between a table of three guys and a table of two women, everyone eating dinner. Most of the restaurant at this point were tables of women, then the table of guys, and then the Stallion and I showed up. The table of guys soon left and it was all women, plus us.

Our server came over and was extremely friendly – almost a little too friendly. Almost like he was flirting with me, maybe even hitting on me – which, given that I was obviously on a date, was a little tacky. Then, while telling us the specials, he laid on the French accent a little thick – to the point where I was internally rolling my eyes hard. But neither of those is so bad as to warrant a mention on the blog, except coupled with everything else…

I ordered a glass of blanc de blancs almost as soon as we sat down, and it came rather expediently. When tS ordered a beer, our server wandered off and never brought it, and tS finally had to get up and ask the very helpful bartender (who twirled around the dining room occasionally, handing out flowers to all the ladies to put in their hair) for it. A bit later, as our server walked by with a drink for a woman sitting at a table near us – she was waiting for her date – tS asked for another beer. Without missing a beat, our server said “OK” and turned around, drink still in hand, and walked towards the kitchen – NOT THE BAR. As he walked away, I saw him look down at the drink in his hand, take a sip, and shrug.

It took another 10-15 minutes for the woman to receive her drink (I hope a new one!), while tS didn’t get his beer until he got up 20 minutes later to ask the bartender for it again. Instead, the server who’d brought us the gnocchi saw him get up and immediately asked what was wrong, and brought us the beer within 2 minutes.

During all of this, I finished my glass of sparkling wine, but was never asked if I’d like another. I guess he didn’t want to pad the bill! Also, there was a bottle of water at our table, which I was fine drinking, but he never came by to refill that, either. He didn’t ask if we wanted dessert – we had to ask for the dessert menu (which he told to us instead), and then he never came back to ask if we wanted dessert or the bill. We had to hunt him down to get our bill eventually.

I watched him interact with other customers and determined that he might have ADHD or some sort of focus problem. He wasn’t rude or unfriendly, he was just downright forgetful, which isn’t a good trait to have in the service industry. Or maybe he was just more interested in flirting with the tables full of women around us? Our service was just bizarre, though the other server/runner – who wound up bringing us most of our meal – was totally sweet and skilled at talking about our dishes with us, explaining things, and just totally great. It was just the one guy who kept disappearing on us that was weird…

And since I’d checked in on Foursquare, which tweeted that I was at Little Prince and tagged the restaurant as well, they responded “thanks for coming in!” or some such, and I responded something about the food being tasty but weird service. So they replied, asking me to message them with the service issues so they could “look into it” – which wasn’t necessary, honestly – but I tweeted back my thoughts, and they deleted their tweet asking me about it. Weird, right? Maybe it was the server who had ADHD who runs their Twitter…

Bottom line? Good to great food, and maybe it was an off night for service? Maybe it was the first time this guy smoked pot? Maybe it was his first night as a server? All I know is that the service could have made the night horrible. As it was, it just made the evening slightly bizarre and gave tS and I something to laugh over and talk about.

I can’t say that I’m in a rush to go back, but it’s nice to know a solid, cute French bistro to recommend when I’m in the mood for that style of food.