Last fall, you may remember CT and I were invited to preview the new Fall menu at Havana Central in Times Square. We got each got quite a hefty swag bag that also include a gift card to return for a meal in the future. The problem was there was no indication of how much the gift card was worth. After writing to the restaurant’s PR firm, we learned the gift card was for $50!!! Therefore we had $100 to use on some Cuban food and drink. Not too shabby!

We braved the tourists yet again and headed through Times Square to get to the restaurant. Fortunately, the wait for a table wasn’t too long. We found it pretty cool that the hostessess were utilizing an iPad with an app that takes patrons’ cell phone numbers and texts them when their table is ready. No more using those ubiquitous buzzers.

We started with a drink at the bar while waiting for our table.

I got a Pomegranate Mojito ($12) and CT got a Caipirinha ($9). Usually I don’t get fruity and sweet drinks, but since it was “free” I decided to try. I liked it too much. Fortunately it wasn’t too sweet due to the tartness of the pomegranate. CT liked her Caipirinha but forgot to ask the bartender to go light on the sugar. (Yes, she knows the drink is mostly sugar.) 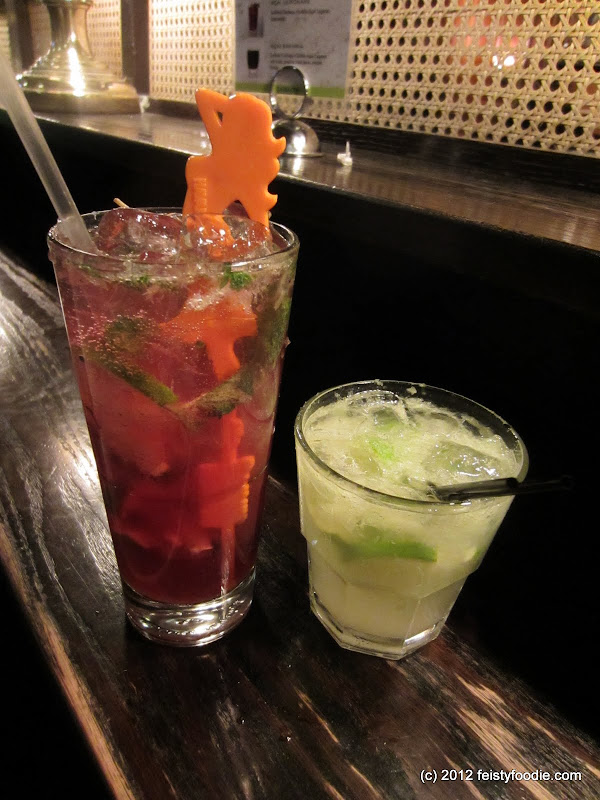 We went a little overboard with the ordering since we had $100 to spend, but figured we would just take home any leftovers.

Lobster Stuffed Avocado ($9.95). “Half an avocado stuffed with lobster and shrimp salad served with crispy tostones.” Since it was just lobster salad and not chunks of lobster, it was understandable why this was so cheap. Fortunately, this was better than average lobster & shrimp salad due to the sweet flavor of the seafood. While its providence was unknown as evidenced by the finely chopped meat, it was worth a try. As mentioned in the past, I love tostones and these were quite good even after they got cold. 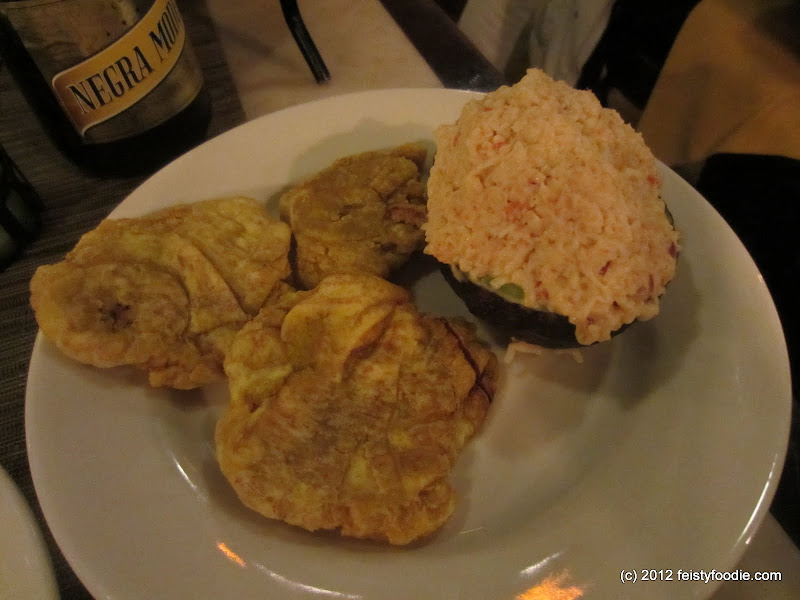 Cuban Appetizer Sampler ($18). “A selection of some of our most popular appetizers and sides:
Chorizo, Tostones, Maduros, choice of one Empanada, Havana Zesty Corn and Chicharrones de Pollo.” Yes, we probably should have just stuck to this as our appetizer. 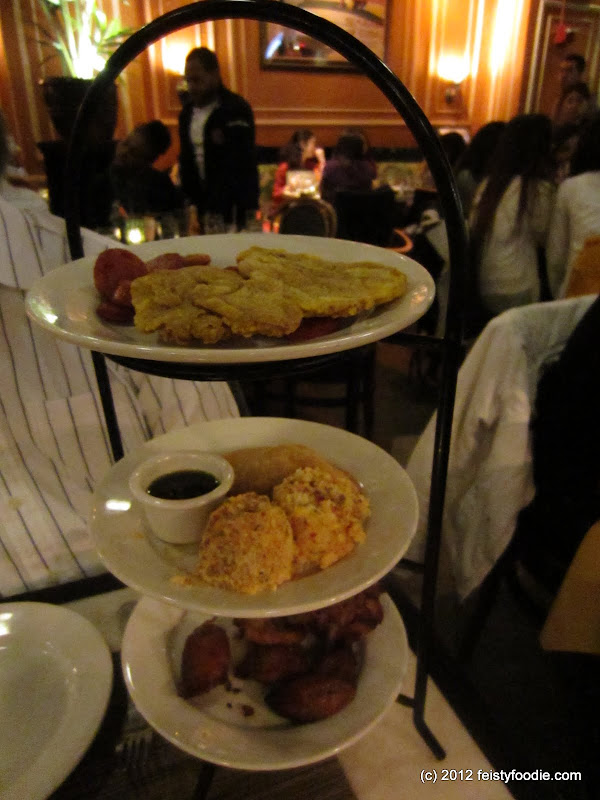 The bottom tier had some delicious fried chicken and sweet maduros. 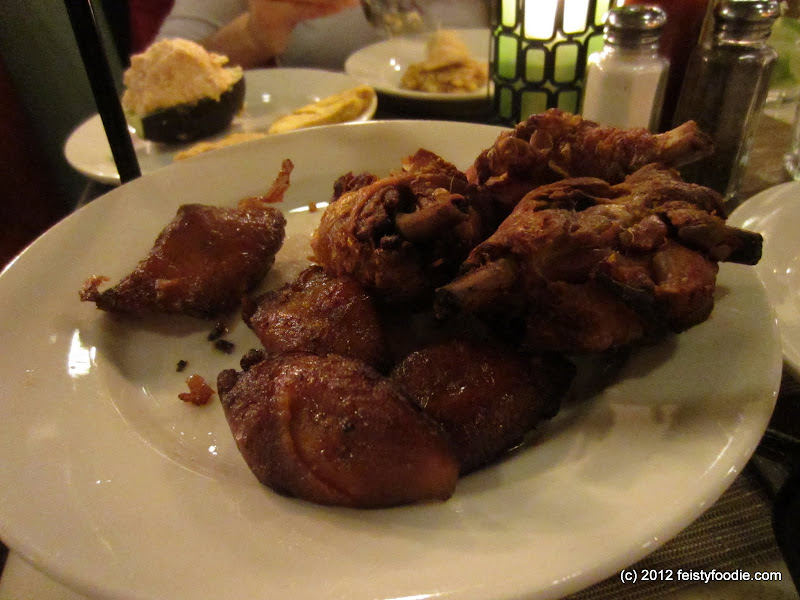 The middle tier was the corn and empanada. Our waiter suggested the beef which we liked well enough. We learned from last time that they know how to make an empanada well and were glad the quality hadn’t gone down. I wasn’t expecting a lot from the corn as March isn’t known as the time for good corn. It was completely masked in a mix of what I believe was mayo, bread crumbs and cheese. It was way too messy to be enjoyable. 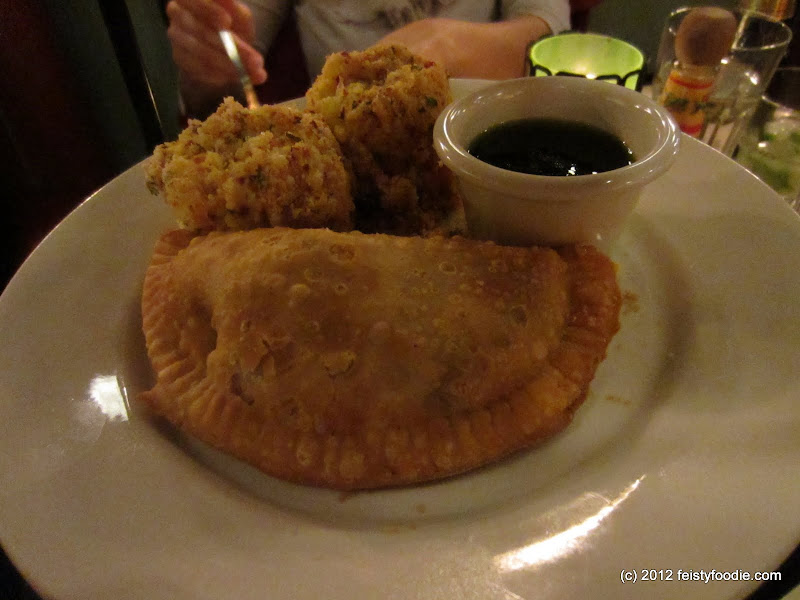 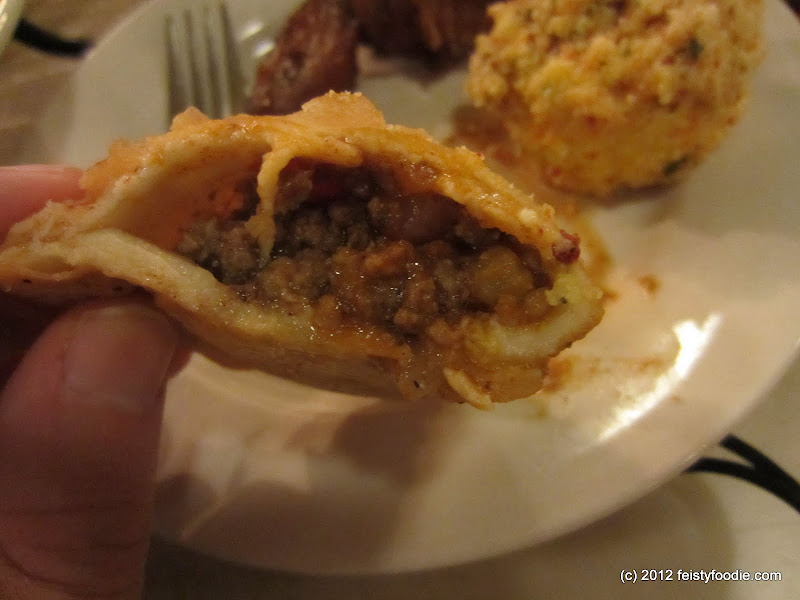 The top tier was chorizo and some more maduros. Probably my favorite tier of the three. While the presentation was lacking, the flavor more than made up for it. I can never get enough chorizo. 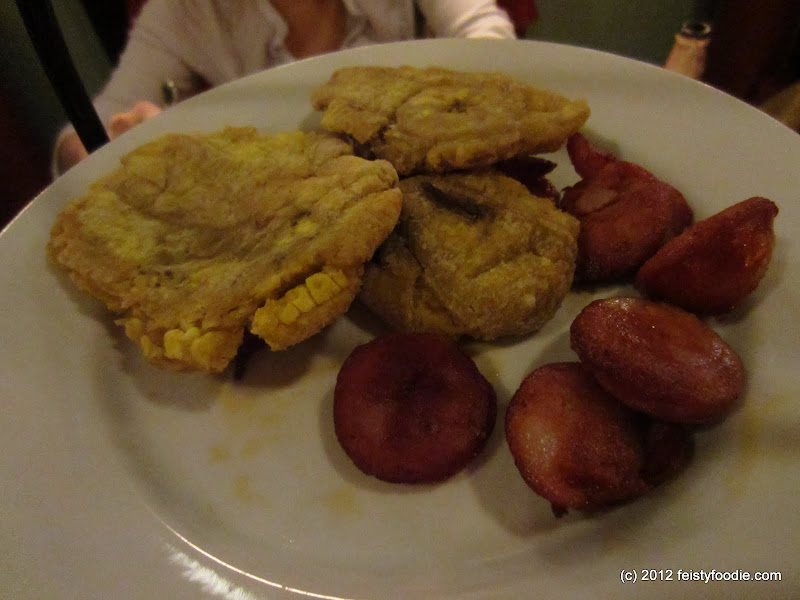 Once CT saw ribs on the menu, she knew she had to get it, especially if there were anywhere near as good as the ribs from El Parador Cafe. Guava-Glazed Havana Style Ribs (Half Rack $16.50). “Baby-back pork ribs marinated in our house adobo, slow-roasted in a guava-BBQ sauce.” She seemed to be quite happy with her choice, even if meat was not as tender as the preparation from El Parador. I had a small taste and enjoyed the glaze and appreciated that it wasn’t too sweet; however it could have used a little more heat. 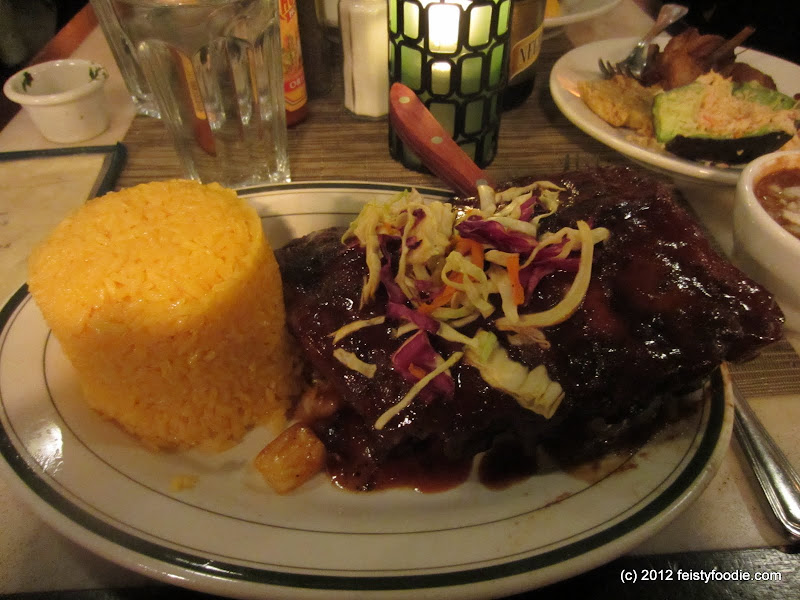 For her side, she chose the red beans, again based on the waiter’s recommendation. 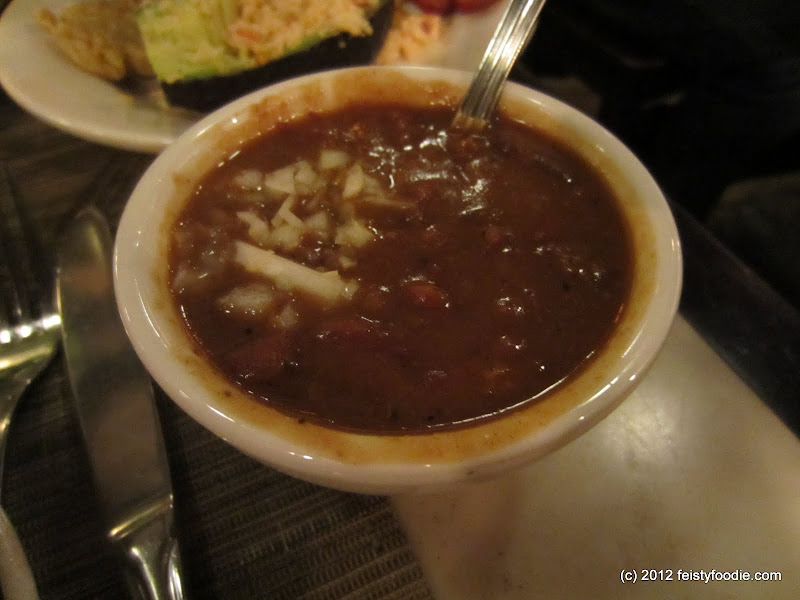 I went all out and ordered probably the most expensive thing on the menu. Skirt Steak ($24.50). “The most flavorful center-cut skirt steak grilled to perfection. Served with a cucumber, mango
and radish salad. (Comes with our Cuban version of chimichurri sauce on the side).” I hardly ever order steak in a restaurant since it is usually pretty expensive and one of the least healthy items on a menu. However, it’s good to splurge every once in a while. The steak was cooked to a requested medium-rare, however it was lacking seasoning. The “chimichurri” sauce helped; I only wish there was more of it since it was quite a large piece of meat. Unfortunatley, the mango was quite out of season so it basically had zero flavor in the “salad.” 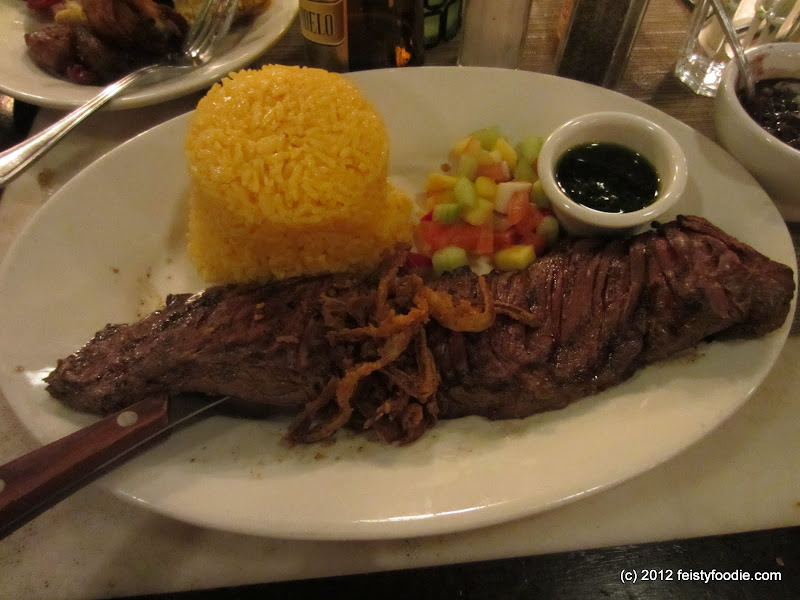 I chose black beans for my side. 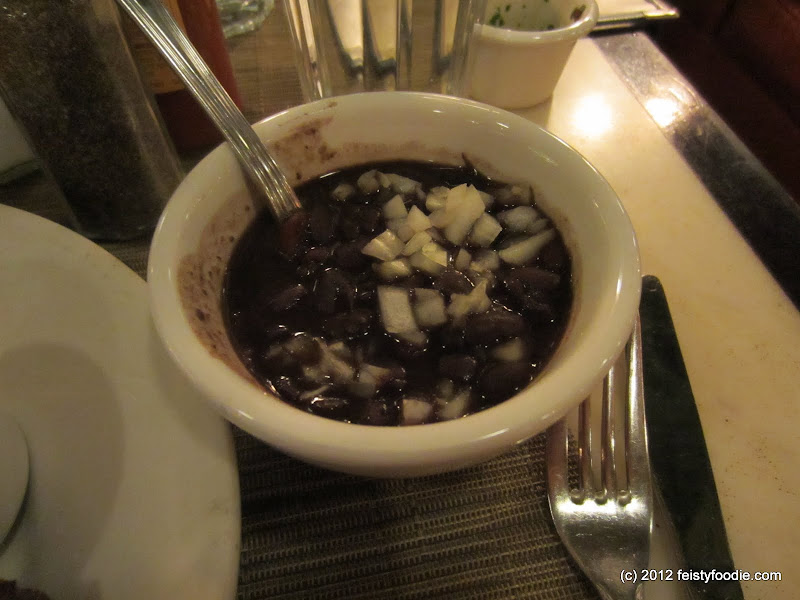 All in all, CT and I enjoyed Havana Central especially since we had those gift cards. The food was good, but the flavors were a little muted for my taste. We did have plenty of leftovers for a hearty meal the next day. I would say if you are looking for dinner and stuck in Times Square, you could do much much worse than Havana Central. Thanks again to Havana Central for “subsidizing” our meal!