During my trip to DC, I noticed on the Metro map that there was a stop called “Falls Church”. I don’t know much about the DC metro area, but I did know that Falls Church was home to a large Vietnamese population and boasted some really delicious pho and banh mi as I’ve heard… so I got really excited and suggested we drive there before visiting the National Air & Space Museum and then leaving for NYC. It all worked out in terms of proximity… 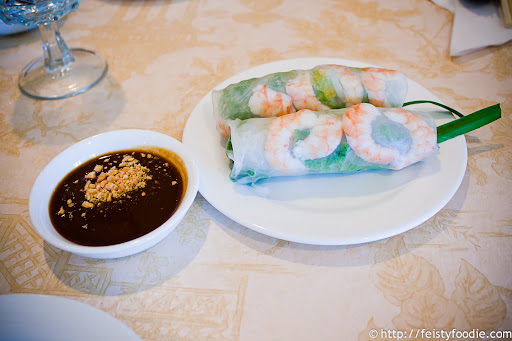 I always start with an order of summer rolls, because I like these better than fried spring rolls. These were sizeable and pretty good, with a really love price that surprised me (I forget, but it was like $3? in that range). 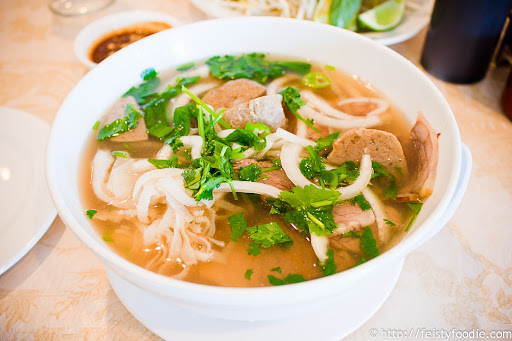 DLS and I got the same thing (though I added beef balls to mine) so I only took pictures of mine. The broth was intensely flavored, and really lovely, and while my noodles initially were clumped together, a few swipes through with my chopsticks and they separated easily.  The beef was tender, and everything was just perfect – absolutely delicious – and when I added my standard squirt of lime, I was in total heaven.  I really enjoyed my bowl of pho, despite my initial reservations as we walked into easily the largest, cleanest restaurant in Eden Center (and I wanted to go to a hole in the wall) – which wasn’t very busy at all despite it being lunch time.  Also, our bowls of pho were in the $10 range (a little bit under), which surprised me.  Since we didn’t check any other places, I don’t know how much the other restaurants charged, but I found this a little higher priced… but the service was better (our water glasses were refilled constantly), the place was more upscale and very clean, and our server was very pleasant.

Yvo says: I definitely enjoyed my bowl of pho, though when I return to Eden Center, I’ll be checking out other places to see how they stack up instead of just returning straight here.  It was definitely one of the better bowls of pho I’ve had though – surpassing most places in NYC easily, though not as good as Montreal or San Francisco.