Sometimes I just don’t feel like cooking, so it was one Friday night that DLS and I found ourselves at a local Japanese BBQ place, the recently opened third NYC location of Gyu Kaku. 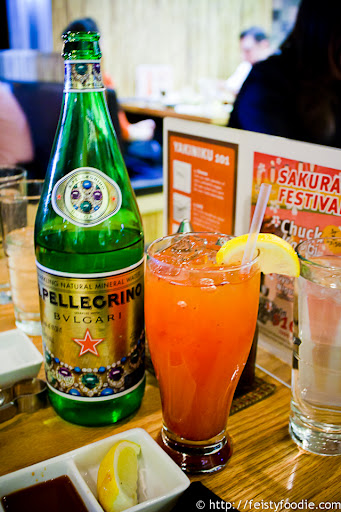 Per usual, DLS wanted Pellegrino. I opted for a strawberry lemonade, but when I’d reached the halfway mark, I added Pellegrino for a bit of sparkle. I love sparkling drinks, that’s just me.

After a lot of debate – not knowing what to get, and just wanting a large sampler of everything, we finally settled on one of the set menus for two – the Hanabi menu for $100. We also had 15% off since they were newly opened, so that was cool. 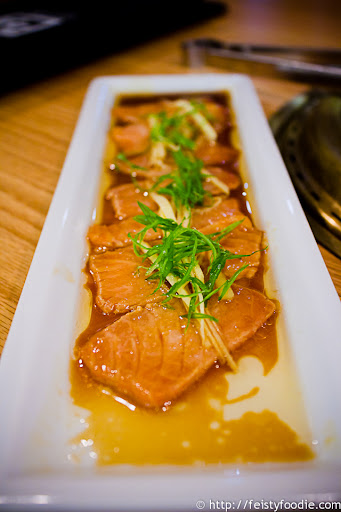 Our first dish to arrive: hot oil seared salmon, which was very fresh and tasty, though it reminded me distinctly of a Chinese fish dish my mother makes – whole steamed fish that she then pours boiling oil over the top… with soy sauce. It’s very good, but not what I expected here. 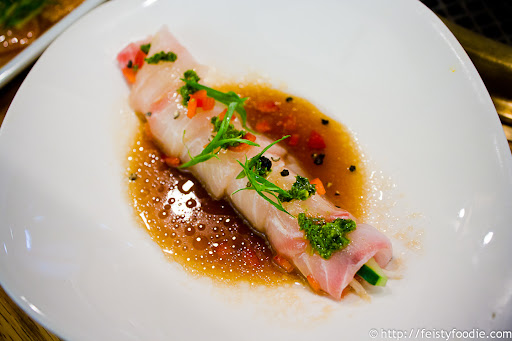 Yuzu carpaccio was by far my preferred dish of the first two: slices of raw fish wrapped around assorted vegetables, served in a light yuzu dressing, I really enjoyed this greatly. I think DLS noticed because he kindly gave up the last piece for me to eat, thanks! 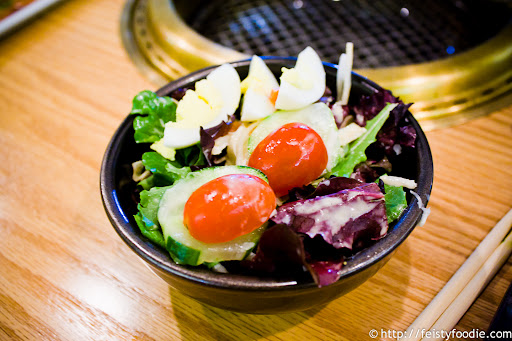 Our server came over and showed us the platter of Gyu Kaku salad, then asked if we’d like her to serve it for us. When we agreed, she left to scoop it into two separate bowls but still made it super pretty, which I appreciated. I should take a moment to note that our service was fantastic – I don’t remember her name, but our server made sure to explain everything to us, and she was extremely helpful when we were laboring over the menu and trying to figure everything out. She even asked at the end what we liked best and told us what her favorites were – really sweet.  And the salad was the perfect blend of crunchy bites, lightly sweet dressing, and just very tasty (though my friends will tell you that you don’t win friends with salad). 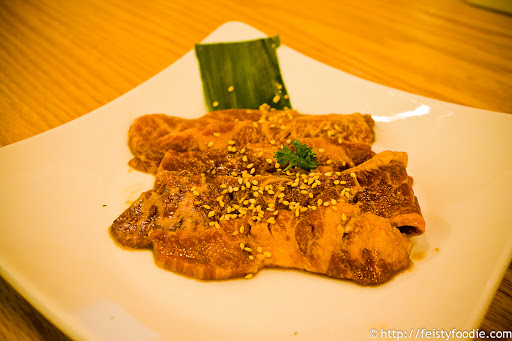 Then our meats began arriving: kobe chuck kalbi, which was super tender and very tasty. As each plate of meat landed on our table, the runner bearing it would tell us how long to cook it on each side, which was much appreciated. 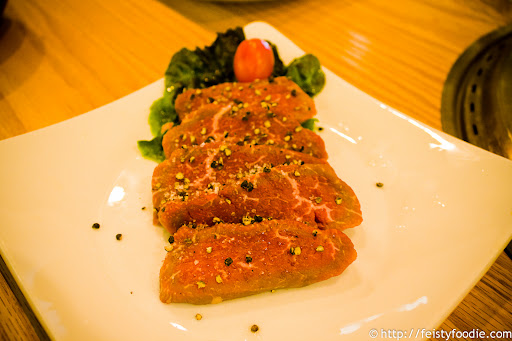 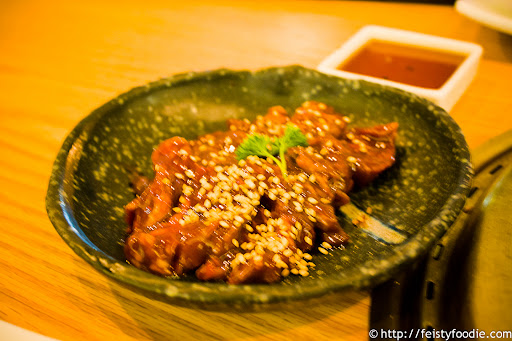 This horribly blurry picture is of the bistro harami hanger steak, one of my favorites of the night. 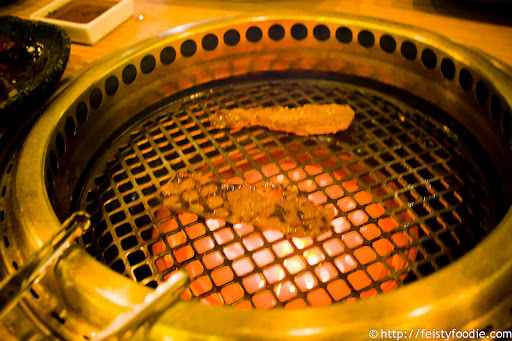 The cooking times/instructions were especially appreciated as it turned out that DLS was quite adept at following those instructions, using his watch to time each side. I let him cook everything; what is with guys and cooking meat over an open flame? Haha. 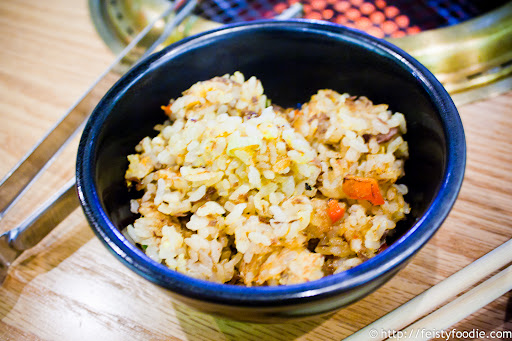 Our set menu also came with sukiyaki bibimbap, which… I can’t even explain how awesome this was. A server came by and showed to us how he stirred everything together in a hot stone bowl – asking us how spicy we wanted it – and then let it sit there while the smell tantalized us – to create a super crisp crust. Then, he came back eventually and served it into two separate bowls, so though the crust had formed, the rice was able to cool down (which is one of my issues when I eat dolsot bibimbap at Korean restaurants) a bit and I could enjoy the intensely crisp rice crust along with the well-flavored rice itself. At this point, I was giddy with delight over the food. 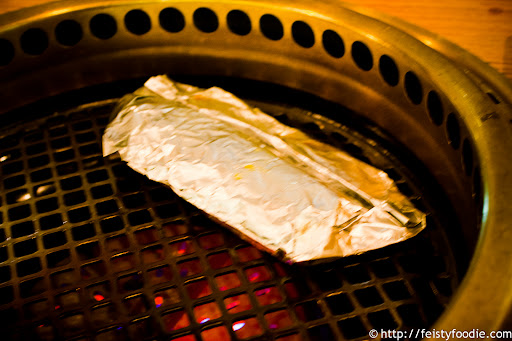 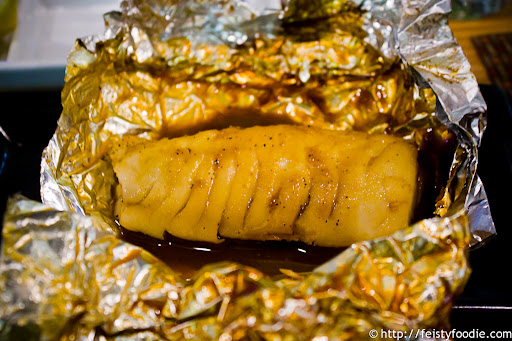 Miso cod came in a foil packet to steam on the grill. DLS asked if his miso halibut was better, and I had to say it actually was – the miso here was too overwhelming for the subtle fish and totally overtook it. I would not order this again. 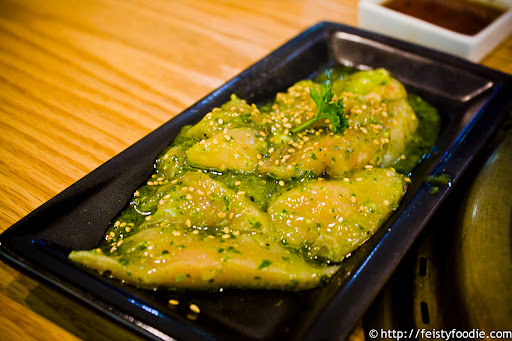 Basil marinated chicken didn’t fare better – the flavor was fine, but I didn’t think it was anything special. 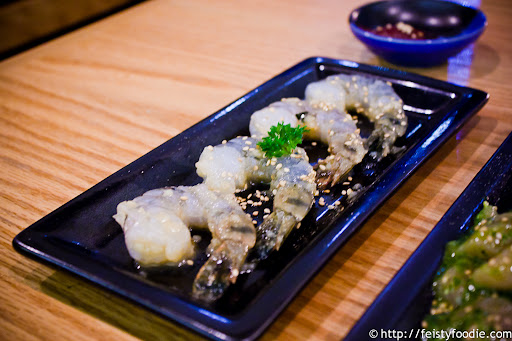 Garlic shrimp; I’m not a huge fan of shrimp and these were just eaten because they were there. 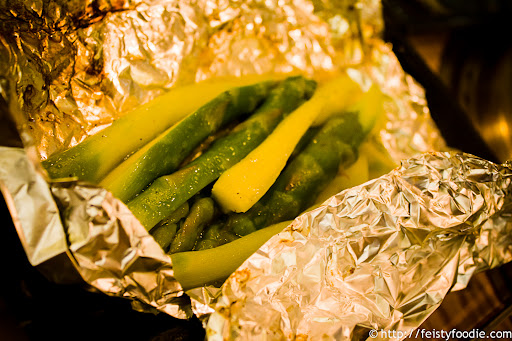 Asparagus, which both of us like, but this was in way too much butter. I’d have preferred they be grilled instead of soaked in butter… next time, I’ll pick grilling vegetables from the a la carte menu. 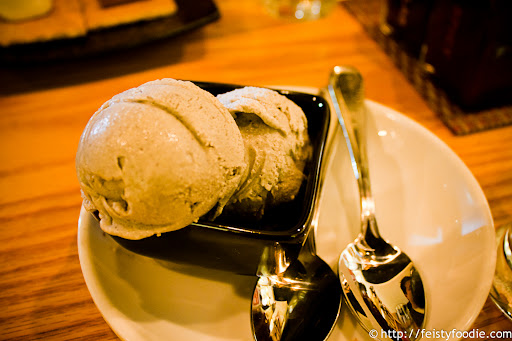 Well, here’s where I once again display my need for indulgences… One of the reasons the Hanabi menu was chosen instead of the Matsuri menu (another set menu for 2, this one only $80) was because of the desserts. Black sesame gelato, which obviously spoke to me on many levels, but DLS didn’t seem to mind when my eyes went wide and I whispered “black sesame gelato?!” – regardless, this was unlike any black sesame ice cream I’ve ever had. Denser, richer, more black sesame flavor, I literally danced in my seat with joy as I licked each spoonful clean. So freaking good. 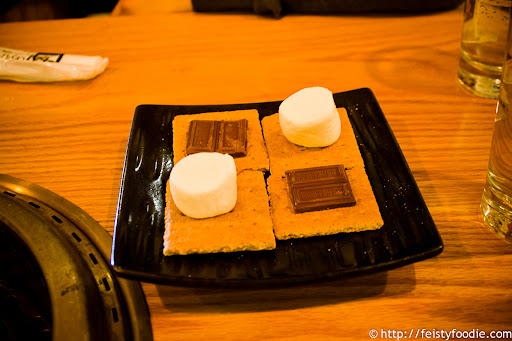 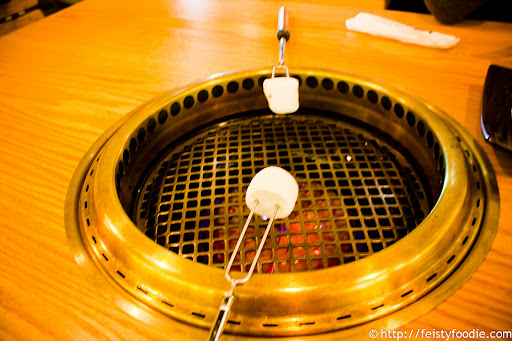 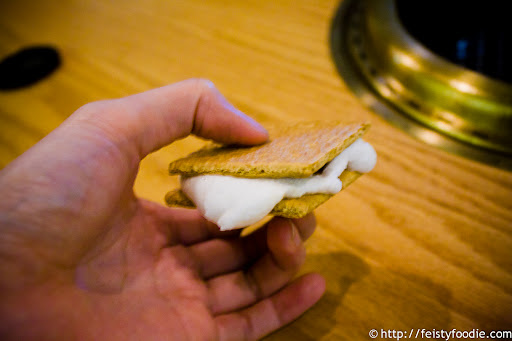 The set menus came with two desserts, and the more fun one was obviously making your own s’mores over the grill. It was a lot of fun toasting the marshmallows carefully – though I almost lost mine! – and then pressing them carefully between the graham crackers to melt the chocolate. I didn’t think I’d be able to eat my entire s’more, but I did, and it was good.

Yvo says: I thoroughly enjoyed my meal at Gyu Kaku, and I know for sure DLS did as well. He even signed up for the frequent diner card (which costs $1 but is good forever), which is also a good deal. While I definitely preferred the red meat items over the other items, I enjoyed the menu for the ability to try a lot of different things and quickly realize what I liked and didn’t like as much… and next time, I’ll be able to order from the regular menu with ease and happiness. Yum! The one negative was the lack of exhaust hoods – normally, my experience at Japanese BBQ has been that they have exhausts close to the grill so you don’t go home smelling of food, but this place didn’t have that. Oh well – it won’t stop me from returning. I really liked the food.
recommended