Sadly, as someone who eats out as often as I do, they cannot all be winners – but that doesn’t make the disappointment any less when I do get a dud. 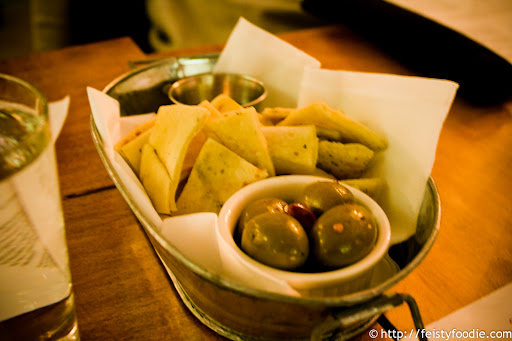 On this chilly Saturday evening in March, DLS, Lenny, FS and I headed over to L’asso. FS and I had discussed visiting a week or two prior to that, but schedules didn’t work out – and then ScoutMob came out with 50% off so obviously we had to go immediately. Small pieces of pita came as bread service, with olives, and all were fine – not standouts either way. 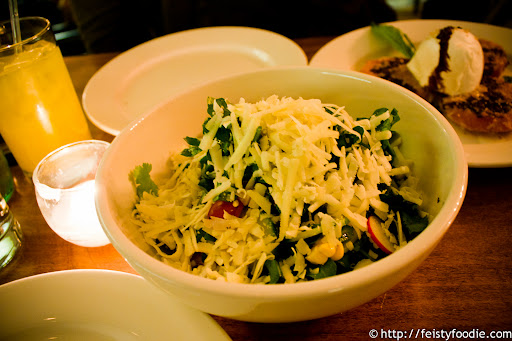 We started with the fresca salad to share. While Lenny & FS loved this salad, DLS and I were both more reserved about our feelings regarding the taste. For me, I simply don’t like watercress raw all that much (unless it’s tempered excellently by fatty items, which this wasn’t); DLS seemed to feel the same way. I just find it a little too peppery and bitter for me raw. 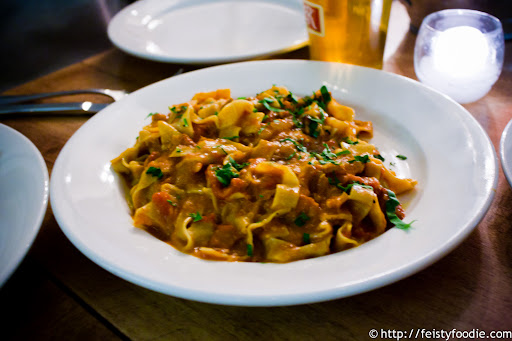 Our next dish, tagliatelle amatrice, fared much better (though my photo didn’t). Fresh wide ribbons of pasta, tossed with tomato, pancetta, onion, white wine, I liked the flavors here and the al dente pasta. No complaints about this dish. 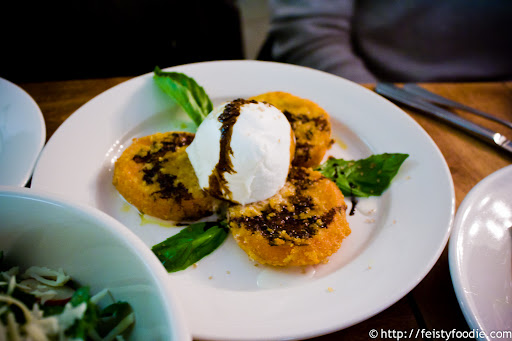 Our last appetizer, fried green tomatoes, caught my eye because fried green tomatoes (which I adore when done well) are not found on that many menus around NYC, much less at pizza restaurants. It was a cute play on the traditional caprese salad; instead of simply juicy ripe beefsteak tomatoes, the crunchy green tomatoes were a great play… though the basil did nothing for this presentation.  The mozzarella, creamy and soft, played well against the crunchy tomatoes, but I think this could be elevated to new heights had they used burrata… mmm, burrata.  And perhaps a bit of pesto instead of fresh basil leaves… 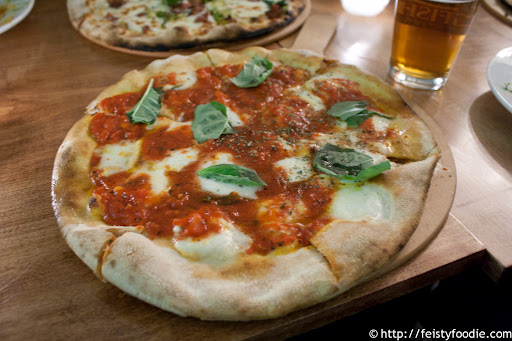 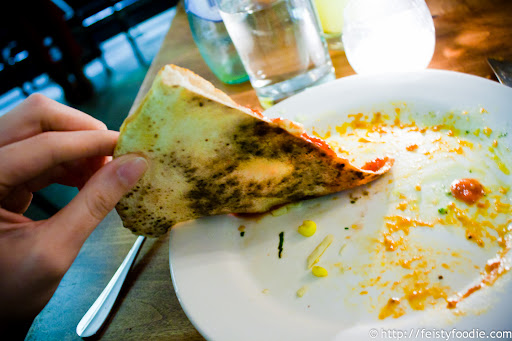 Then our pizzas began arriving. First up, the bufala mozzeralla, the pizza that made them famous. Given the style of pizza, I was surprised to feel how soft the whole slice was – soaked in sauce, and just very difficult to eat, not pillowy soft perfection as I expected. I was pretty disappointed. 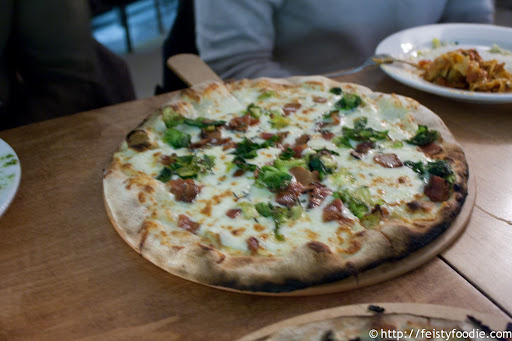 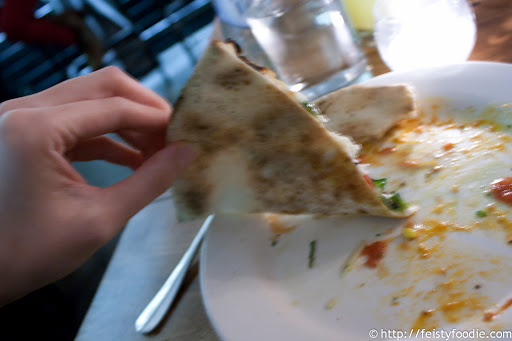 Next, the megane – which bears a similar description as my favorite pie at Motorino – brussels sprouts and bacon (Motorinio uses pancetta). This pie was both my favorite of the night and the most disappointing; while I liked the texture a lot as it suffered less from over-saucing, rosemary made its presence known very strongly. Rosemary is not a shy herb to begin with, and it is definitely one I enjoy in extreme moderation, but here someone went a little crazy with it, making it hard for me to eat at times as my entire mouth would fill with the woody herb. I was less than pleased with this. This won’t be a problem for those who love rosemary as well, but I know I’m not the only person in the world who can’t tolerate rosemary in large quantity. 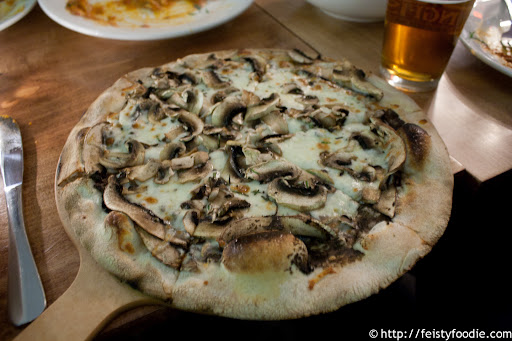 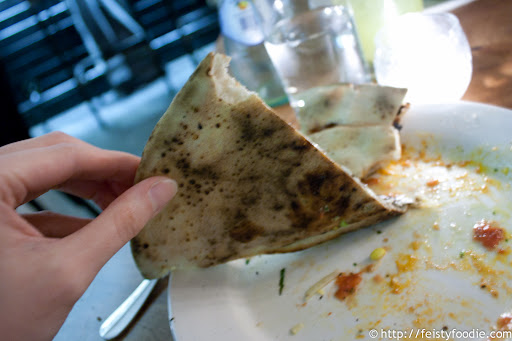 Our third and final pie – suggested by FS for DLS in his absence from the table (he went to get me Tylenol because of a monster headache I felt coming on; yes, I’m truly blessed to have such wonderful friends!) – was the tartufo. This pie never had a chance for me to pick as a favorite – boasting mushrooms (which I love) and truffle oil (which I’m iffy on), and more heavy handed rosemary. Truffle oil has this tendency to assault my nostrils, which puts me off what I’m eating, and then to taste that combined with the rosemary… I wasn’t all that thrilled.  I’m sure it was enjoyed, though. 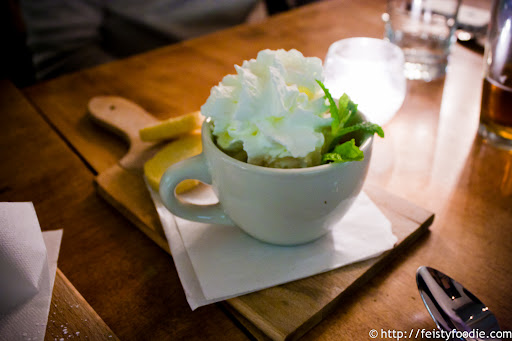 Salted caramel pudding that I thought was okay, nothing truly special. 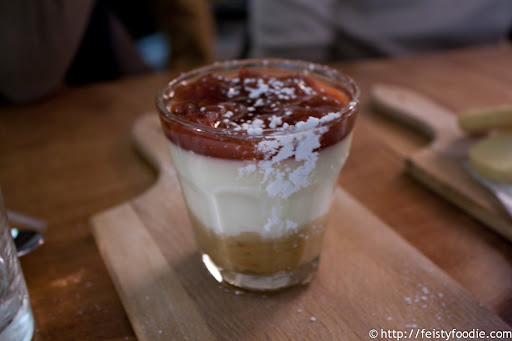 PB&J panna cotta… let’s pretend you already know how much I adore panna cotta. This one didn’t do it for me.

Unfortunately, I felt the pizzas were very blah – the texture of the crusts suffered greatly, and when they didn’t, whoever dropped the container of rosemary on the pies did us no favors.  I was extremely disappointed after hearing such good things… and even more so when the bill came. Even after using the Scout Mob deal (50% off, up to a $30 total discount), I felt it was rather expensive – I believe we each paid a little less than $40/person. With 4 people, that means our total bill without discount would have been close to $190… which is a lot for four people, no wine of which to speak (I think there was a beer in there somewhere and a soda or two), for pizza. Ridiculous, actually.

Yvo says: I definitely do not have any interest in returning – with high prices and mediocre pizza, despite the excellent service (our server was super friendly and really helpful) and some really good dishes, none of those add up to a repeat visit. I can find better pizza, more reasonable prices, elsewhere, easily. Sadly… I’m labeling this a ‘pass.’
not recommended for pizza