A couple months back, I posted about a delicious dinner CT & I had at the relatively new Filipino restaurant, Sa Aming Nayon. After reading the post, our friend TC suggested we all go out to Woodside, Queens which has a large Filipino population and hence a bunch of Filipino restaurants. Since I have a new appreciation of this cuisine I was excited to have some more that would most likely be even cheaper in the outer boroughs as opposed to Manhattan. He suggested we go to Engeline’s.

It ended up being a small group of just four of us. Unfortunately, CT was held up at work, so she’ll just have to drool over what she missed, but I made it up to her with a treat I got that night.

Beer Boor and I both decided to drink Calamansi Iced Tea ($2.50). Calamansi is a type of Asian citrus, almost a cross between lemon and lime. It made for quite a refreshing tart drink (perfect for salty meals). 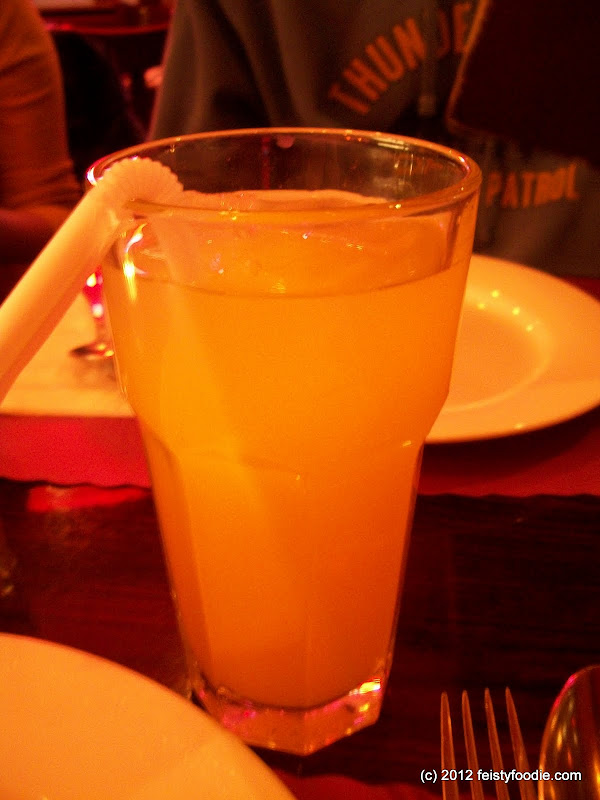 Filipinos love their pork, so we pretty much stuck to that for our meal and got a couple different preparations.

We started with the sizzling Sisig ($9) for comparison purposes. It was a very good preparation, but I believe it was mostly pork belly rather than an even mix with pig ears and snout. Any dish that involves a fried egg and pork is fine in my book regardless of the amount of different kinds of offal. Sa Aming wins on this dish, although it was $3 more there. 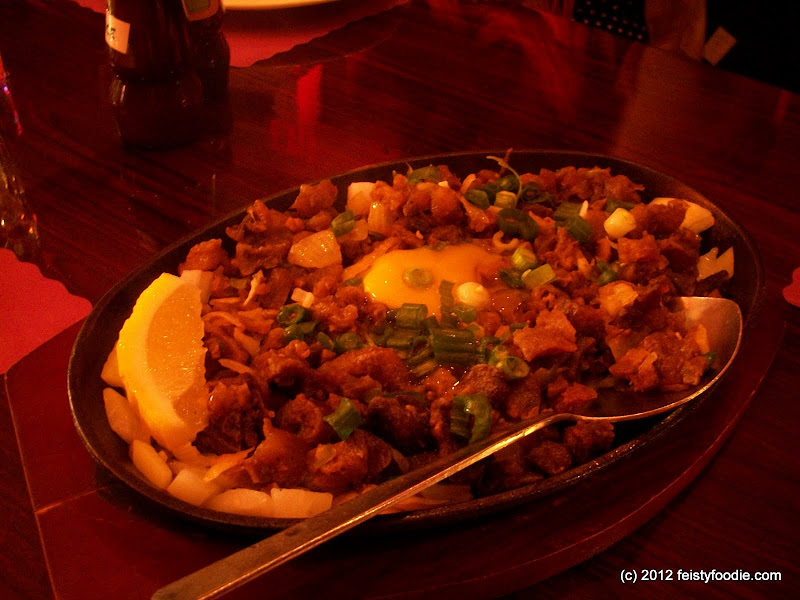 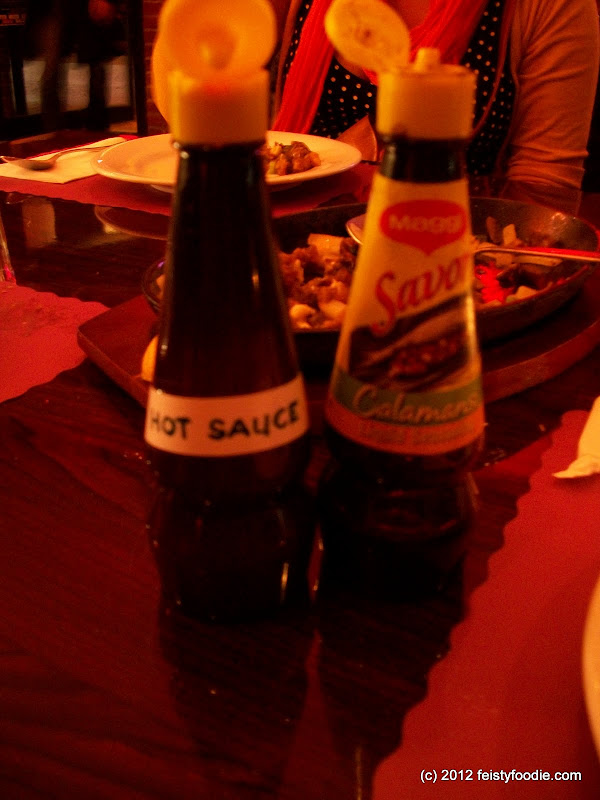 Next was the Chicharon Bulaklak ($7). Usually when I see chicharon, I think of fried pork skin as is the case with Latin cuisine, but here it was deep-fried crispy ruffle fat. I think it was sliced pig intenstines? Regardless, they were nice chunks of super crispy meat. A little greasy, but some of the accompanying vinegar mixture helped with that. These would make a great, but dangerous, bar snack. 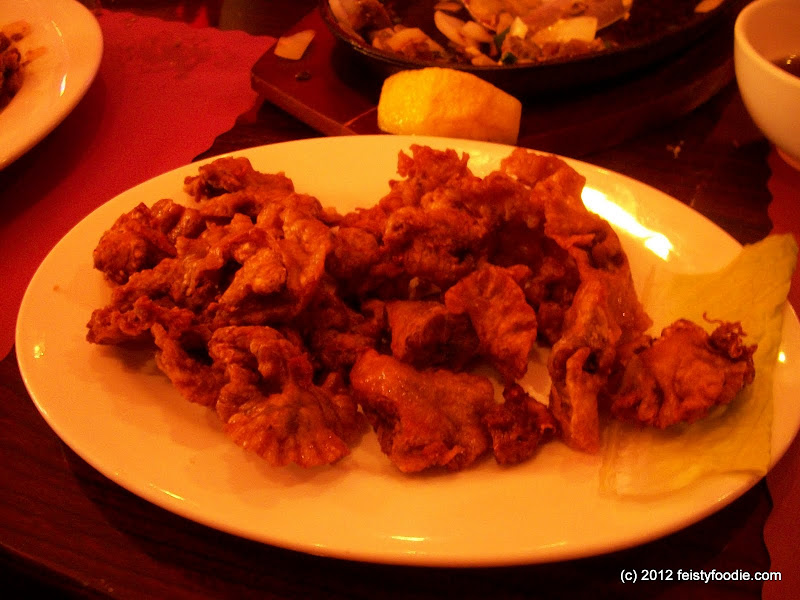 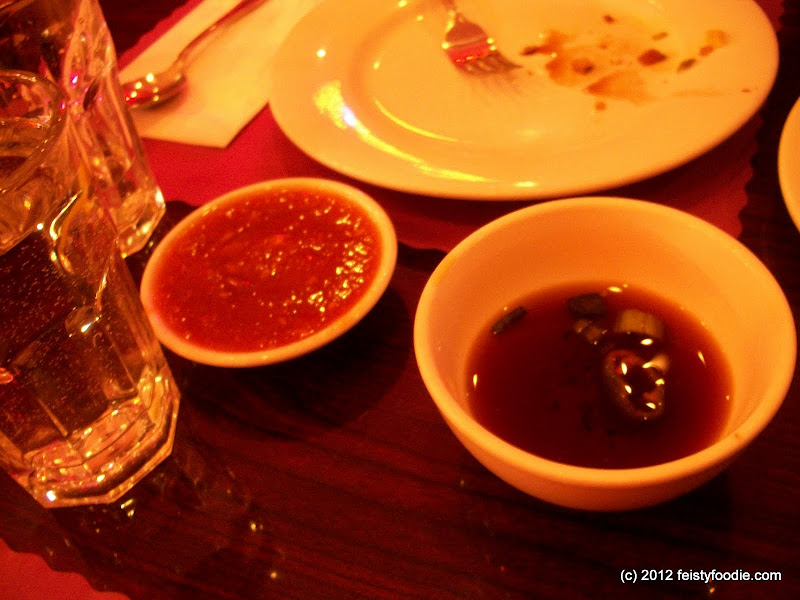 TC insisted on ordering the Lumpiang Shanghai ($7) and I for one was not going to disagree. This was shrimp and pork spring rolls and ended up being quite a large portion for that price. Nice and crispy on the outside with sweet pork and shrimp on the side. They were made even better with some of the sweet & sour sauce pictured above. 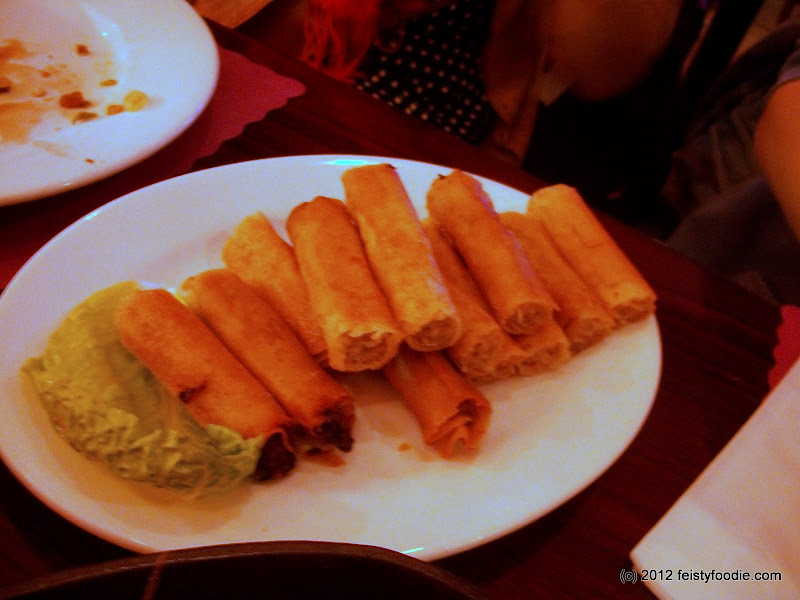 We also got some plain rice for the table, so we weren’t eating all porky fried foods ($1 per ball). 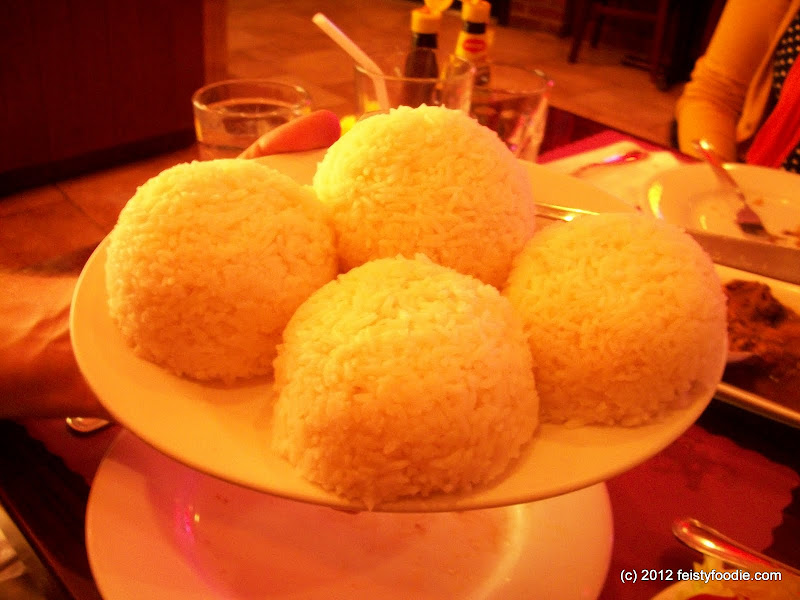 MadJac picked out the Grilled Pork Belly ($9) from the menu for us. I forget what the actual name was, but it was quite simple and good. Although it was a little underseasoned, so some of that calamansi soy sauce quickly fixed that. 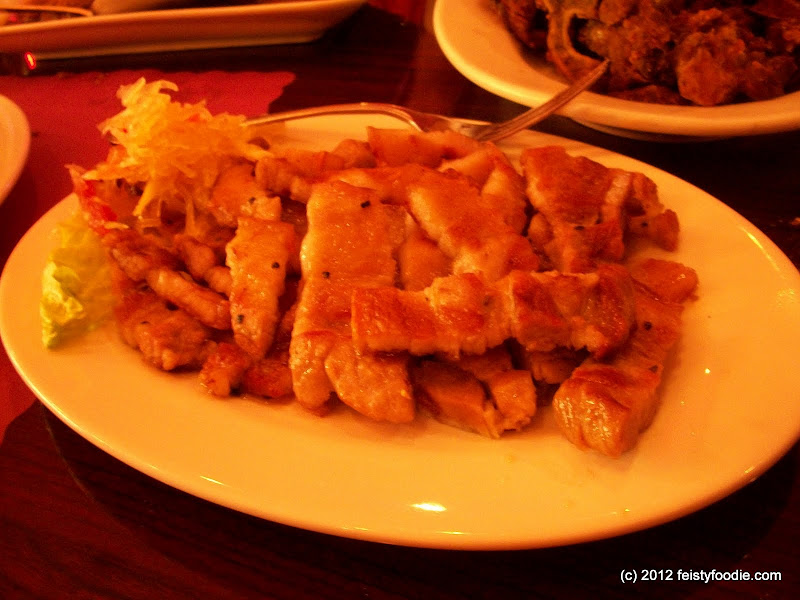 The main event, Crispy Pata ($9). This was also $3 cheaper than at Sa Aming. The Chef chopped it a little, so it wasn’t as intact as the preparation I previously had. Less scary looking, haha. This was actually much better than the one I had back in December because it was seasoned more, but on the other hand it had a little less crispy skin. Regardless, I think the whole table enjoyed the lip smacking goodness from all the connective tissue and hunks of meat. 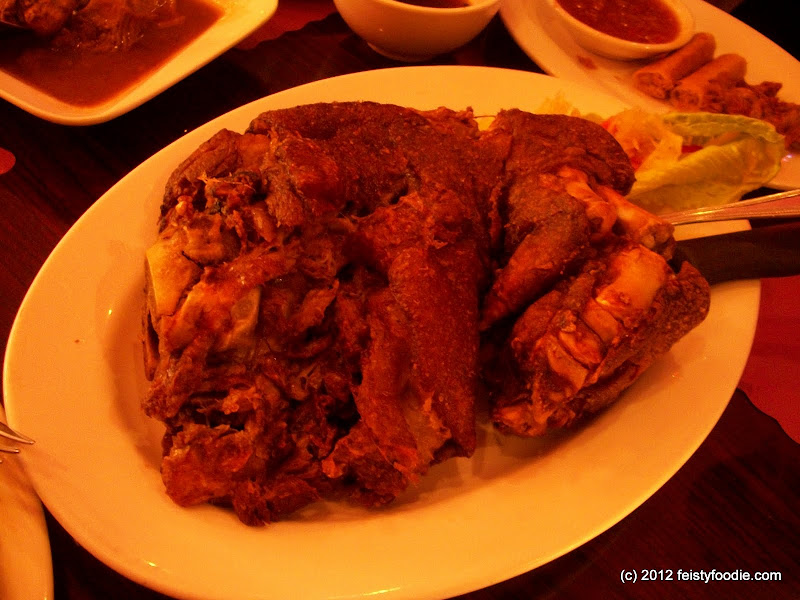 TC also suggested we get another very traditional dish, Chicken Adobo ($7). Eventhough it wasn’t pork, it was also very good. Super tender chicken in a tasty, complex sauce. I am glad we got this in order to try something new. 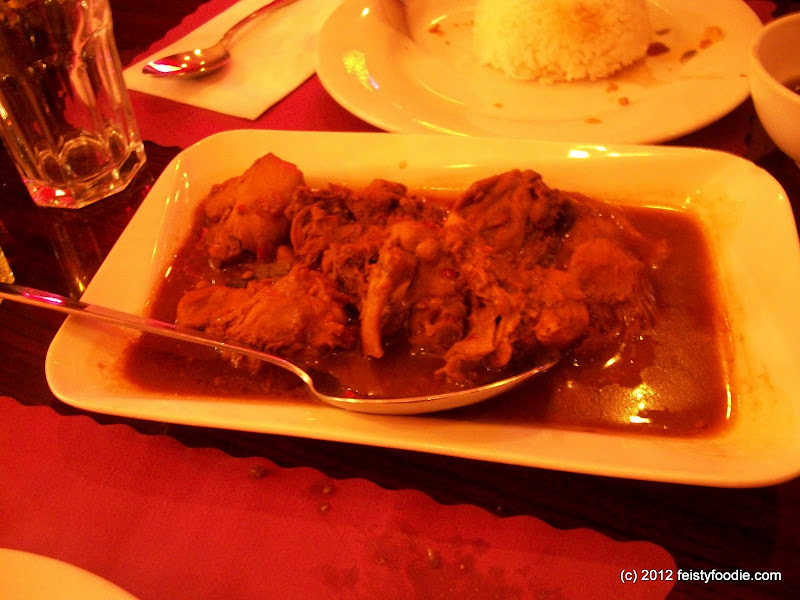 Although Engeline’s doubles as a bakery, we decided to pass on getting dessert there. I actually suggested getting dessert, which was very unlike me, but needed something sweet to counteract all of that fried salty food. I also had to get CT a treat to make up for her not making it out.

On our way to another bakery, we stopped in Jollibee, which was basically a Filipino version of KFC. They have warm pies for dessert that are very similar to the classic McDonald’s apple pie. Instead of apple though, they have more “unique” fillings; peach mango or banana jackfruit. They were $2 each. Beer Boor seemed to like his banana jackfruit pie. Although my peach mango pie was quite hot, I liked it too. 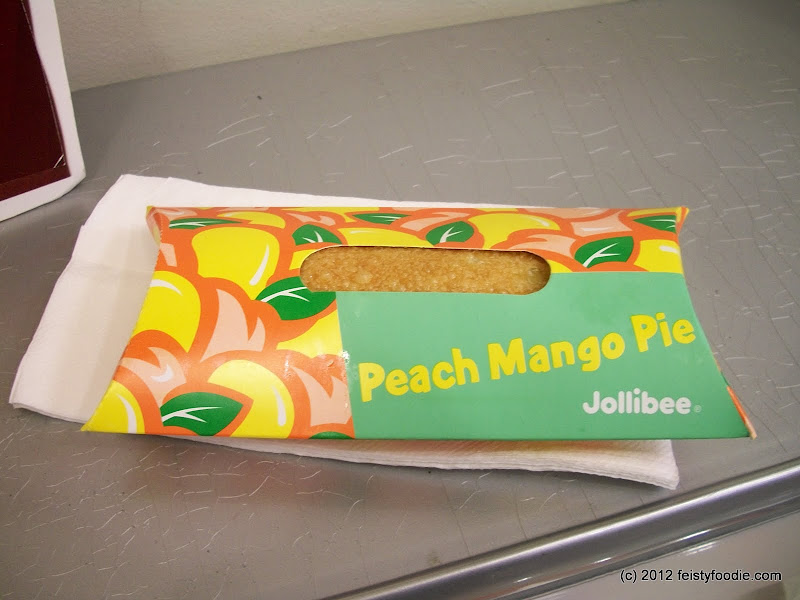 Mmmm, peach mango (and I’m sure plenty of added sugar.) 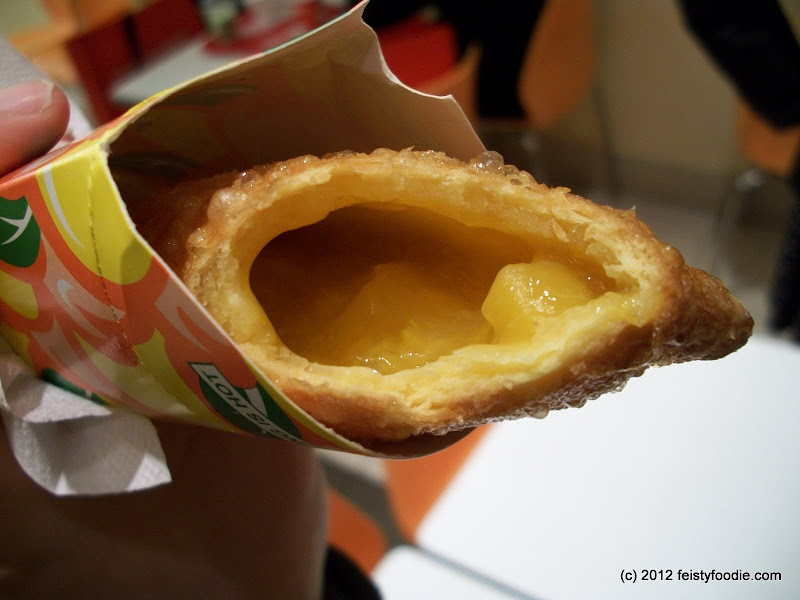 TC got a Ube (purple yam) smoothie. I believe he liked it a lot. 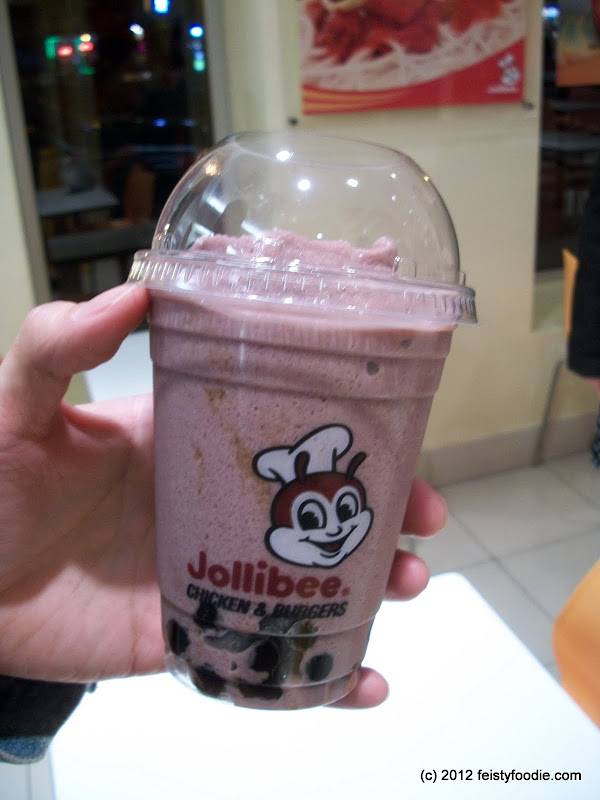 We continued on to another bakery, where I got CT a slice of ube layer cake(not pictured). I learned that Filipinos like to use purple yams in a lot of their desserts. I shared it with her the next day and enjoyed it a lot (don’t worry she sneaked a taste the night I got it.) The cake wasn’t especially sweet which is how I prefer my desserts.

All in all, I enjoyed my trip out to Woodside for some more Filipino food. While the quality was pretty much the same as what I had in Manhattan, the prices were a lot cheaper, as expected. Unfortunately, I think I need to limit myself to one (or two) of these feasts a year. Definitely not recommended by the American Heart Association. Thanks TC for organizing!