After a long day touring the Financial District (Bodies, WTC Memorial, Irish Hunger Memorial, Battery Park, and all sorts of fun things – I give a great informational/historical tour of the Downtown area!), DLS and I walked up through Nolita to meet StB and C2 for dinner.  Along the way, though, I suddenly noticed a sign and thought – holy we’re outside Dominique Ansel! so I insisted we go in and have a small bite.  Because Dominique Ansel was the executive pastry chef when I went to Daniel and I dream about those madeleines… I dream about them. 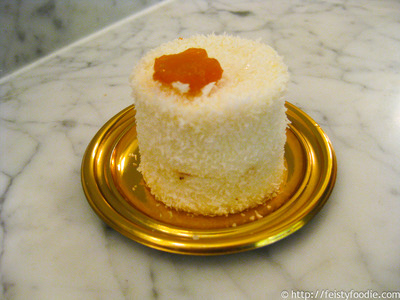 DLS looked through the case and lighted on this cake – mango & coconut. Obviously I didn’t try any as I’m allergic to coconut, but he really enjoyed it, noting how moist the cake was and how tasty. 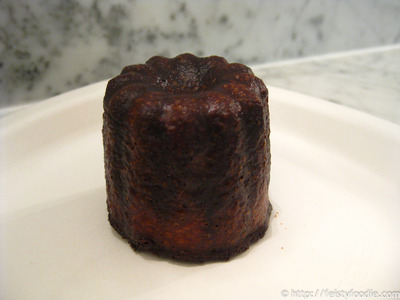 And then the cannele! I’ve heard stories about this treat, and though I’d eaten one of these at Jean-Georges, this was the one to eat. Completely crunchy on the outside (I broke two plastic forks before I gave up and picked it up to bite into it!).  The inside was wonderfully moist, soft, and slightly sweet, while the outside was hard and candy-like.  I enjoyed it, though I don’t know that I’d always get this, especially… well, you’ll see. 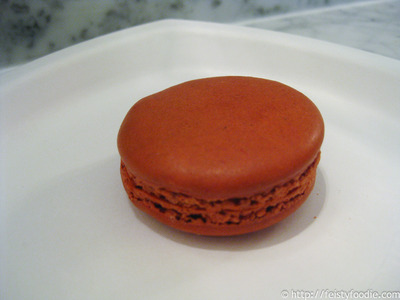 Given my love of macarons, I of course had to try one of their macarons as well.  I chose the caramel one; while this was perfectly tasty enough, I’ll stick to bisous ciao for my macaron needs…

But on this visit, as it was near closing time, I began chatting with the guy behind the counter. I wistfully asked, “Are there ever any madeleines?  I just remember them at Daniel…” and I received the incredible tip that on Fridays, Saturdays and Sundays, after 3pm, one of the chefs comes in and makes them fresh to sell in batches of 10.  When you order them, they’re baked on the spot.  Whoa…

I tried to explain to DLS why this excited me so much.  All I came up with was, “At the end of my meal at Daniel, when I was stuffed to the point of bursting, our server brought over a small basket wrapped in a white cloth napkin, then opened it… I leaned over and warm air, scented with lemon, wafted out and I just had to smile.  Inside the basket, still warm, were freshly baked madeleines, moist, tender cake-like cookies that just melted in my mouth.  Even though I was so full, I couldn’t stop eating them, and I wound up eating pretty much all of them save one or two.  I think that was the first time I ever had madeleines, and I’ll just never forget how heavenly they tasted, how happy I was, and just how delicately sweet, slightly lemony they were.”

Yeah, DLS wanted some after I said that. 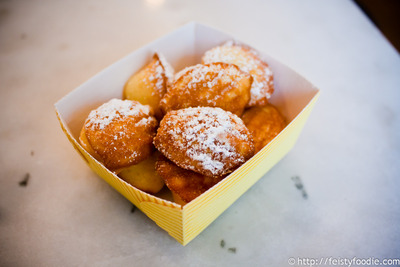 As it turned out, a few weeks later, post-lunch at Minetta Tavern (write-up to come), TC and I walked by Dominique Ansel.  I literally yelped, “What time is it?!” and happily discovered that it was just past 3 on a Friday afternoon.  We went in and TC quickly ordered a batch of the madeleines.  It took about 10 minutes, but he had a cannele while we waited – I think he liked it – and the chef baked our madeleines on the spot.  (I repeated my story to TC about the lemony scent wafting up at me, and the experience was recreated a few minutes later when I opened up the small white pastry bag to reveal this little tray of madeleines… but I don’t think he was quite as ga-ga over them as I was.  He had a few, then relinquished the rest of the tray to me – and I kindly saved some for DLS to try later (though they’d be cold by the time he got to eat them).) 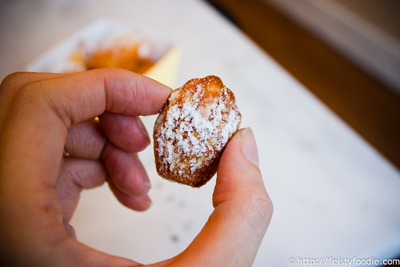 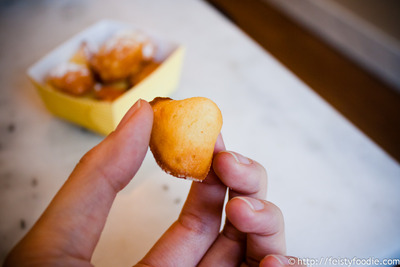 The madeleines were smaller than I remembered them at Daniel, but each cookie – with its slightly crisp , powdered sugar dusted exterior, a moist crumb on the inside, light lemon scent – brought me right back to my night at Daniel.  Magical.  I slowly savored each cookie and almost cried from being able to recreate the moment I knew madelines were my type of cookie.  I sat there and had my Proustian moment, while TC probably thought I was crazy.

DLS was able to try them hours later, after they’d cooled to the point of being regular cookies, but he also really liked them and thought they were very good. Of course, “If they’re this good cold, I wonder how they’d be fresh from the oven!” – yes, friends, I’m sure we’ll be back for more madeleines.

Yvo says: While everything I tried was very good, I’m definitely going to return for the madelines and the madeleines alone. I am sure I’ll try other things as well, but something about those freshly baked mini cookies just did it for me. Reminders of a happier time, perhaps, or just some inexplicable tie to this cookie that brings a smile to my face.
recommended – and if the time is right, you have to get yourself some of these madeleines