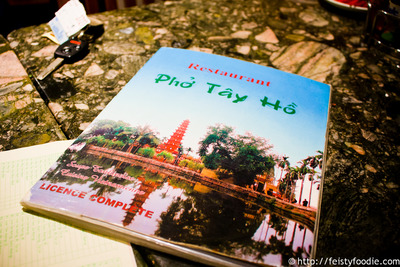 As I mentioned, my friend’s husband grew up in Montreal… but he’s also Vietnamese, so when he mentioned his favorite pho place, I knew we had to go – especially given how much I love pho. 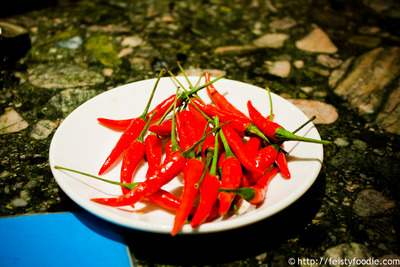 Plates of fresh chiles were on each table.  No, I didn’t eat any of these.  (Even though – exciting news! I have been eating spicy food lately and enjoying it. Flavor and heat without burning my face off!) 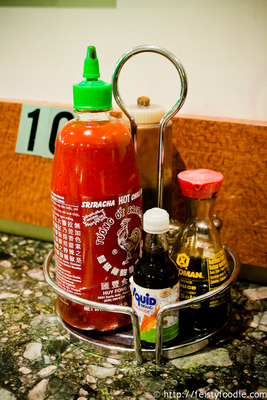 The usual sauce station, though note that there’s a small bottle of fish sauce as well! 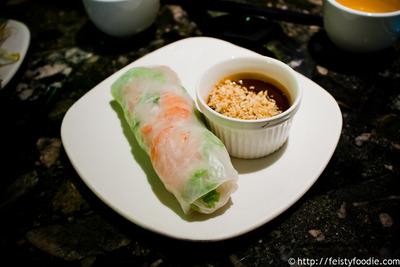 The summer rolls are ordered by the piece, which I didn’t realize.  We split this; it tasted okay, nothing amazing. 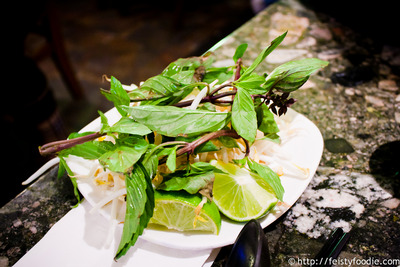 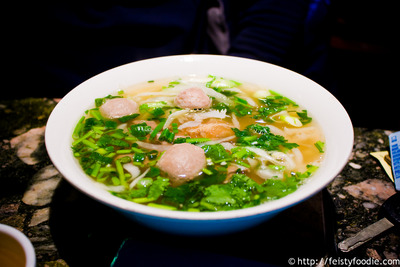 The standard plate of Thai basil, lime wedges and bean sprouts – DLS‘s bowl of pho, which I know he enjoyed. 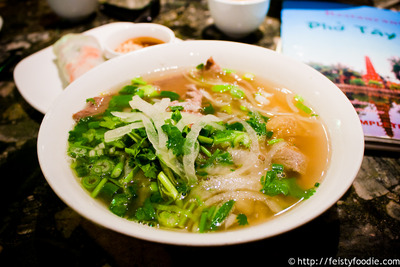 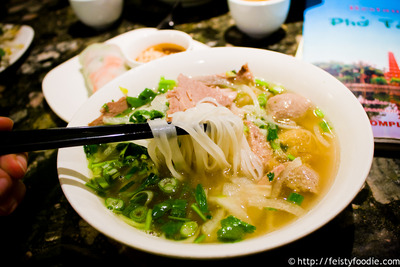 I ordered the standard beef pho for comparison’s sake and really enjoyed the whole bowl.  The noodles were perfectly cooked, and the broth was super flavorful without overwhelming.  I slurped down almost the entire bowl of broth… so good!  I was perfectly full when we finished, and very, very happy… The hot noodle soup was excellent, and even better because it was FREEZING outside (to the tune of NEGATIVE 17… I don’t think I’ll ever get over just how cold it was up there!).  Warmed us right up to our bones! 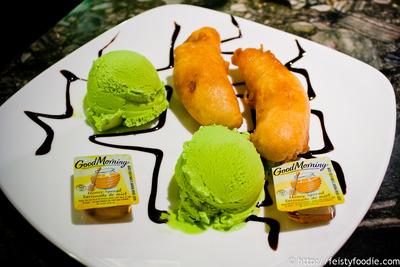 Despite all that – being full and how cold it was outside – DLS saw ‘fried banana’ on the dessert menu and had to order it.  (Never let him tell you that it’s my fault he’s fat.  Yes, I lead him to good food, but I don’t make him eat it!)  I have to say, I LOVED this – the bananas were crisply battered on the outside, while gooey and warm on the inside.  Drizzled with a bit of honey, delicious! and the super artificially colored green tea ice cream wasn’t quite as bitter as I like it, but still very good.  This was a great dessert!  I would never have ordered it, so I was glad DLS wanted it… and even gladder that he willingly shared with me, haha. 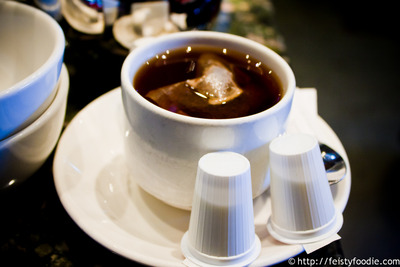 So… I liked this place so much that we went back our last day.  Since I was super cold (again), I ordered milk tea, hoping it would be interesting for $2 and change.  Nope, it was just a cup of tea.  Ah well. 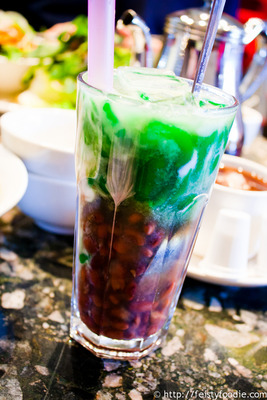 DLS ordered a red bean/grass jelly drink of some sort with coconut milk in it, so I opted not to try any.  It sure is pretty though, right?  (I think he orders things with coconut in it when he doesn’t want to share with me…) 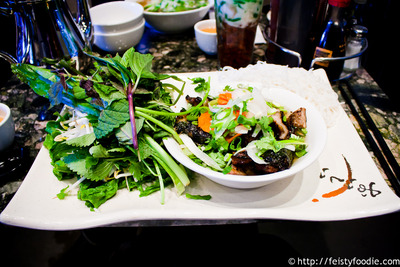 As we’d exited during that first visit, we’d noticed a newspaper article hanging in the window that showed this dish.  We ordered it by describing the article to our waiter. 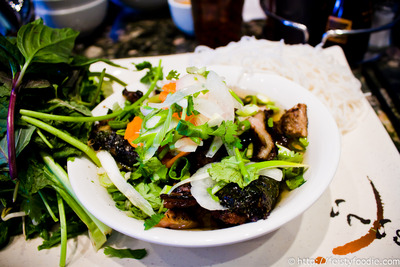 Basically a deconstructed “bun” dish – cold noodles over a salad mixture – it came with the noodles on the side, and a bowl of various grilled meats swimming in fish sauce with pickled veggies, and a bunch of veggies on the side.  DLS got first crack at this dish, and enjoyed it, commenting that the grilled meats were just like what he’s had at other Vietnamese restaurants (apparently you can have a grill at your table… but I’ve not done that, so he has to show me!).  I liked the dish, but found it hard to eat the way they had it – I prefer my bun in one big bowl so I can stir it all around and eat it like that.  Also, I didn’t like one of the grilled meats – it was sort of crumbly, like it was a meatball but not. 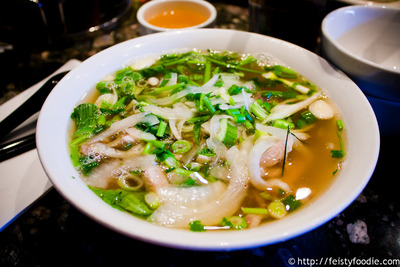 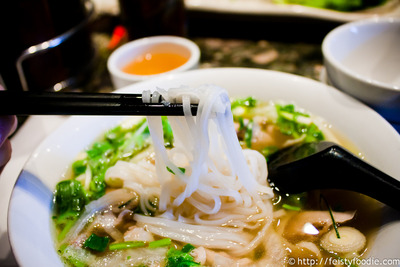 I ordered the pho ga – or chicken pho – because I’d heard it was really good.  And it was – super clean, light broth, and a ton of chicken.  Too much chicken, honestly, since I’m all about the noodles and broth when it comes to pho… speaking of which, we’d intended to split both dishes.  The pho was placed in front of me, so I ate that first, and DLS had the bun dish first.  Unfortunately, in my digging around the bowl, I totally accidentally – ACCIDENTALLY – ate all the noodles without realizing it.  Luckily, DLS was pretty full from the bun but I still felt terrible about it… whoops.  Sorry!  (This is probably why he orders stuff with coconut in it – so he doesn’t have to share and run the risk that I’ll take all of it… wah…)  I left him lots of chicken though!  It really was an accident… but that pho was so freaking good!

Yvo says: That was some damn good pho… honestly, I think this just shot to the top of the list.  My favorite pho place is still Turtle Tower in San Francisco, but Montreal is slightly easier for me to get to (hey, a quick 5 hour drive…).  Hmmm, guess I’ll just have to settle for Pho Bang when I can’t get to San Francisco or Montreal…  Why can’t we get pho like this in NYC?!
highly recommended – excellent pho

« Waffle House
All You Can Eat Hot Pot (Flushing) »