To continue our culinary staycation of 2011, we planned to go for hot pot in Flushing. It had been a couple years since CT & I last went and were waiting for winter to kick in for it to be hot pot weather. Unfortunately, we missed the FBM hot pot outing last year at Shanghai Tide, so we organized another outing during Christmas week. Unfortunately we had a smaller group than usual, but c’est la vie.

Fortunately for us, the restaurant was pretty quiet since most people were smart enough to stay home. Not only was it cold, but it was raining so hard that umbrellas were rendered pretty much useless. I was happy to see that prices remained the same as last year. $26 for all you can eat hot pot and dim sum including all you can drink Budweiser. Not a bad deal at all.

While they prepared the hot pot, we all went up to the sauce station to make our own dipping sauces. You have the opportunity to make quite a unique sauce with such items as chili oil, sesame sauce, garlic and more. 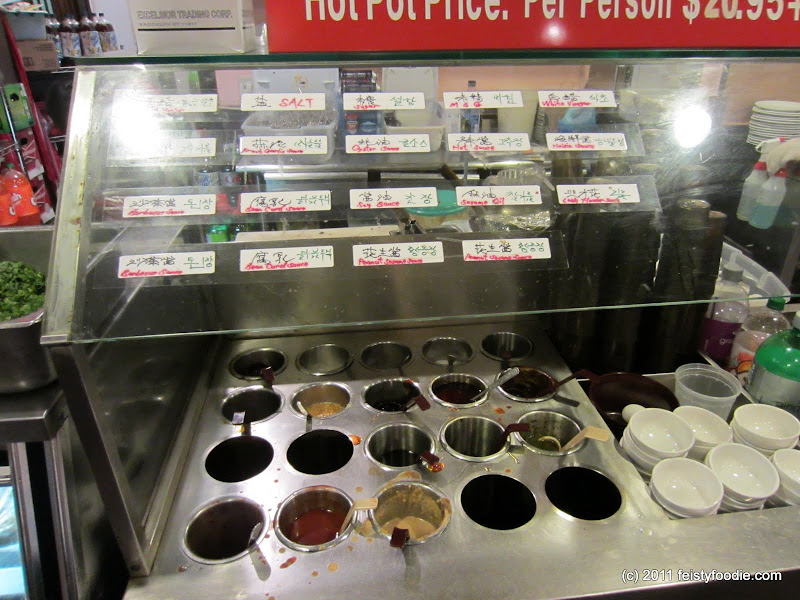 They even have some fresh chopped cilantro and green onion, if that’s your thing. 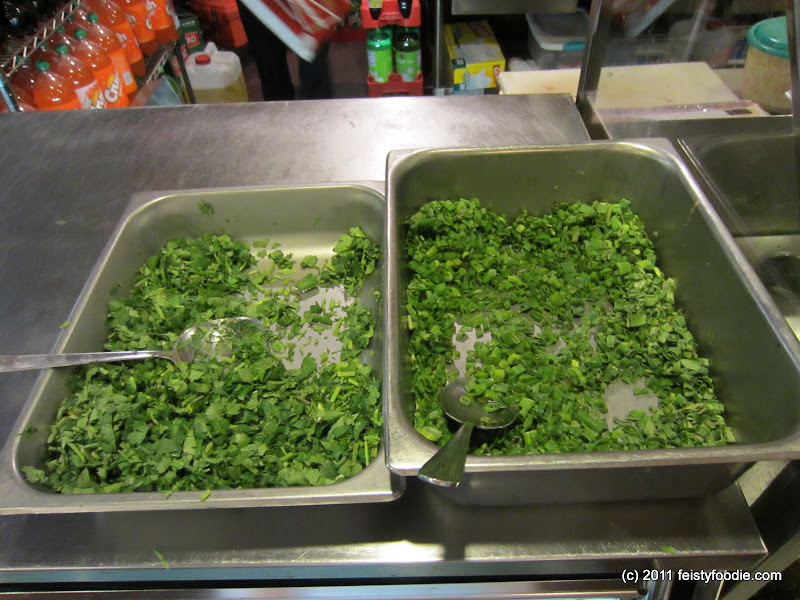 CT made two different dipping sauces. One spicy and one not. 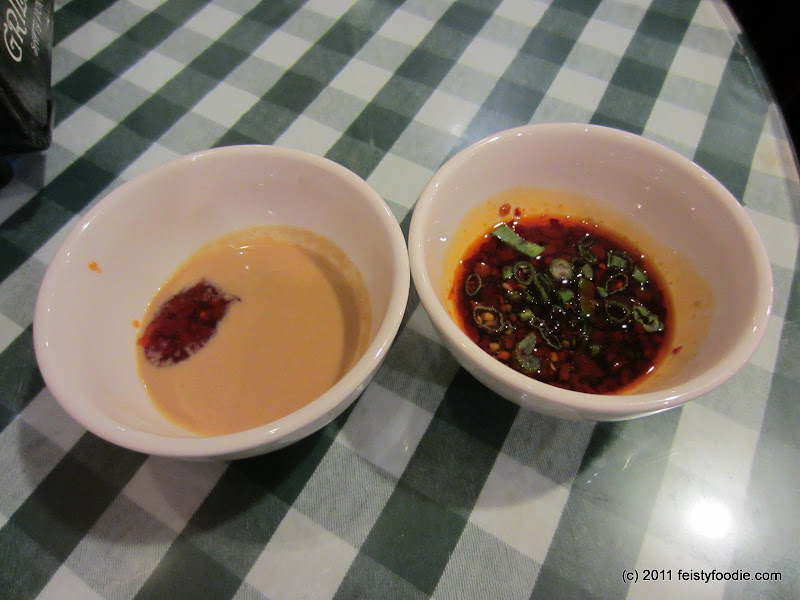 I made one sauce to start. It had chili oil and sesame in it. The chili oil had a lot of heat to it, so I used it sparingly. 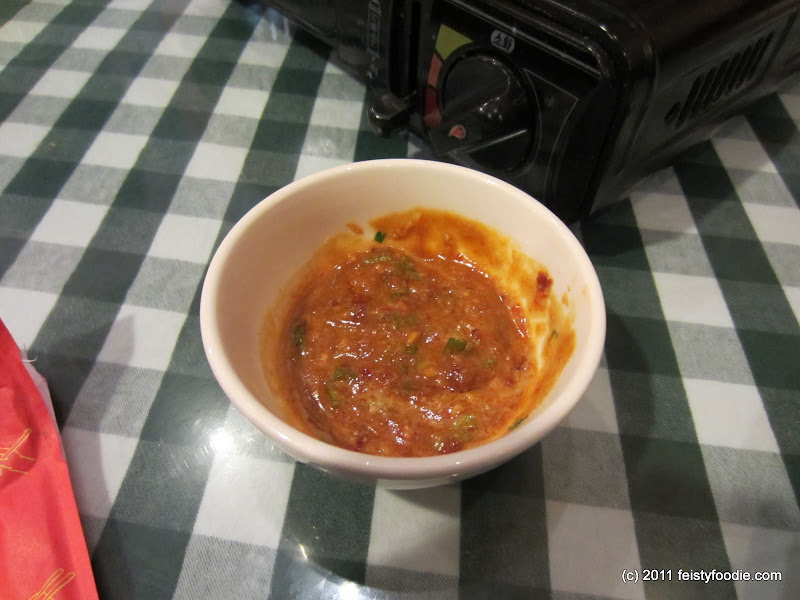 We decided to get half spicy and half plain hot pot. Although we all like spicy foods, we appreciated having the mild version to cool off with otherwise we wouldn’t have been able to eat as much meat! 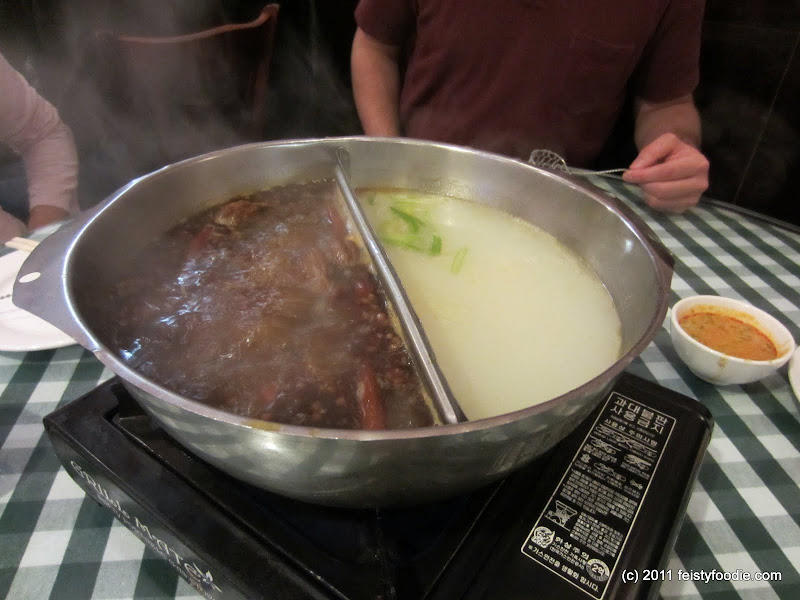 You simply order whatever meats, seafood and veggies you want off the menu and the waiter will bring back a HUGE plate.

This was our first seafood and veggie plate. There was fish balls, squid, cabbage, mushrooms and I think beef meatballs. 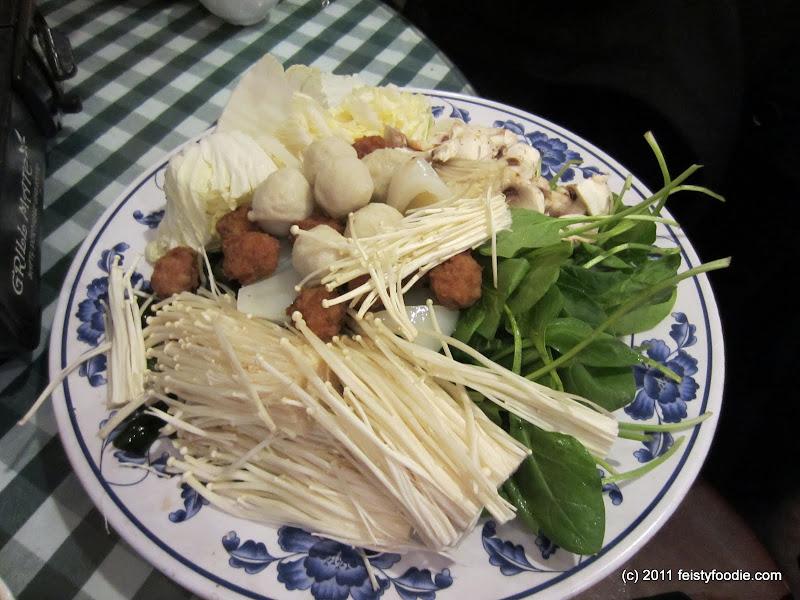 Our first meat plate had a mix of beef, lamb, and pork. They keep the meat frozen in order to easily slice it so thin. Don’t worry it cooks almost immediately in the hot pot. We never learned which meats were which, but they were all tasty and pretty good quality. 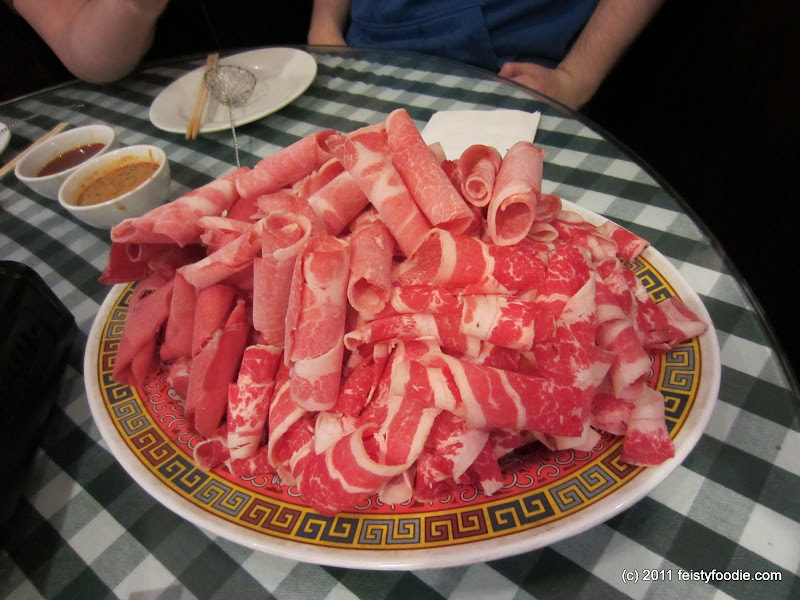 We also got an order of soup dumplings knowing full well they wouldn’t be as good as what I had at Shanghai Cafe Deluxe. They had very little broth inside and were quite sad. I should have stuck exclusively to the hot pot. 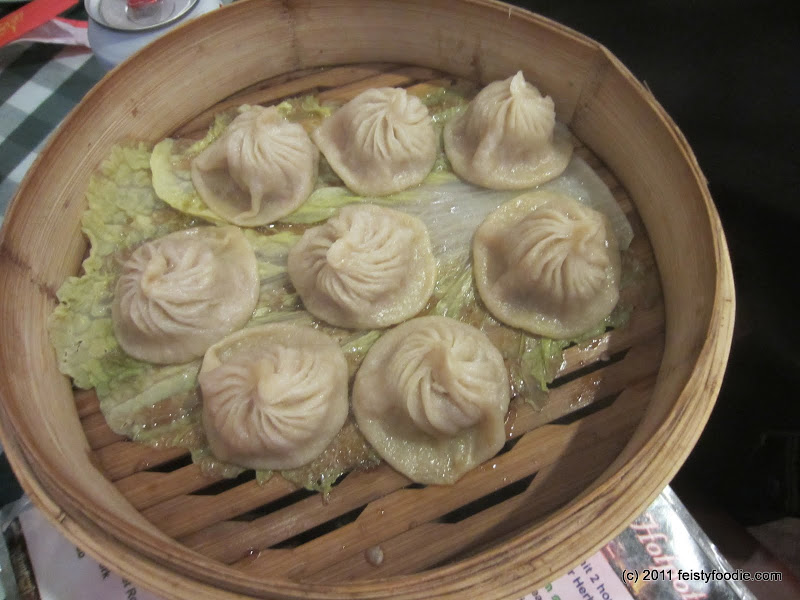 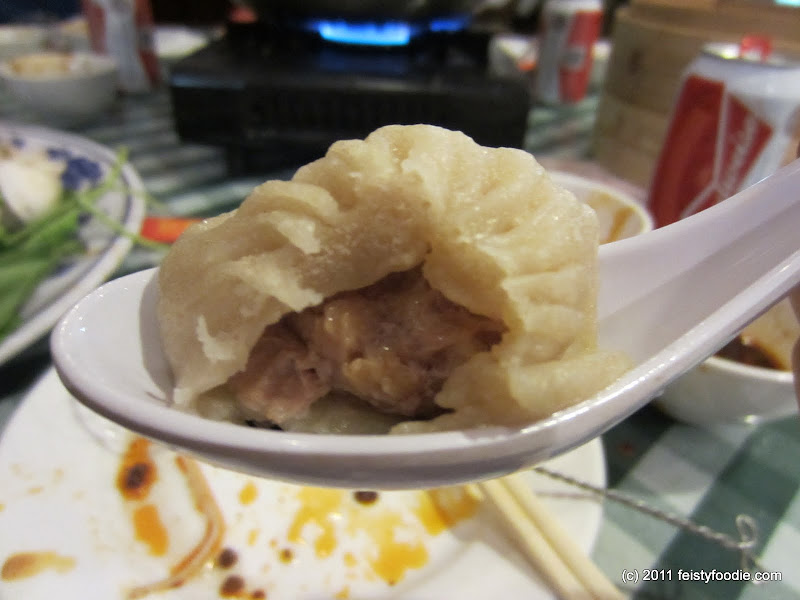 Even though we already tore through a mountain of food, we decided to order one more plate. We made sure to emphasize to the waiter that we did not want a full portion. Fortunately, he obliged. There was some more beef, meatballs and tomato. 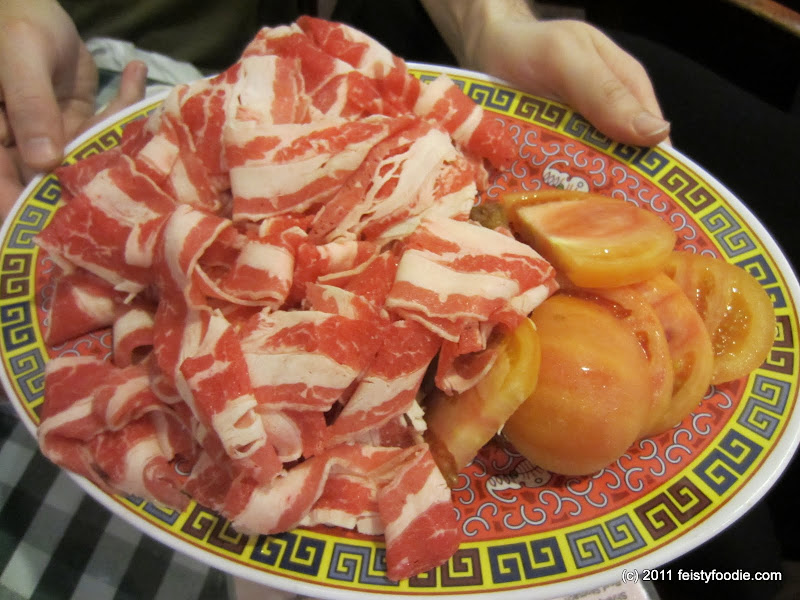 There were also some strange pork meatballs on the plate too. They had the texture of dumplings almost. Beer Boor described it as “non-descript ground pork battered and fried, more or less. Very little actual flavor.” I ate a couple anyway, haha. 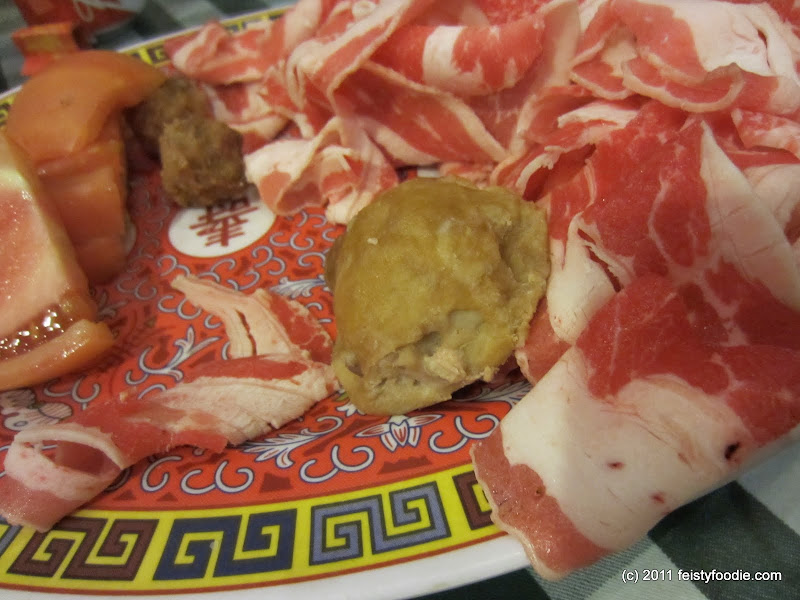 The waiter cleared away a lot of the empties before we could recreate the beer pyramid. Here is our mini version. Not bad for four people. 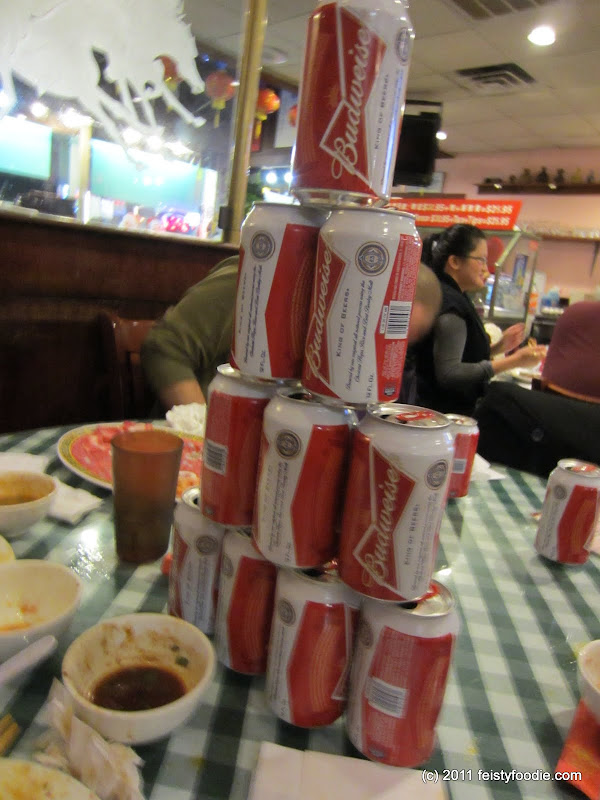 All in all, I was pretty impressed by Shanghai Tide for hot pot. I was worried that with AYCE and AYCD for such a low price that the quality of the food would be bad, but it wasn’t. Service was pretty good for Flushing and for a table of non-Chinese. I will definitely return when I have my next hot pot craving. It’s also really close to the 7 train stop, so no complaining Manhattanites.