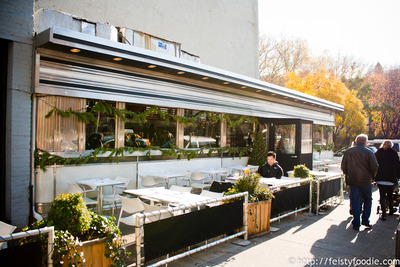 The next morning – a bright, unseasonably warm Sunday – found me really craving brunch.  It’d been a while since I’d had brunch (as you can see by that tag, which is used mostly by TT), but I’d recently read about The Highliner on Tasty Eating.  Perfect for its proximity to both DLS’s apartment and our next stop, Chelsea Piers for the batting cages!  (And I now have video of me hitting 5 balls in a row!  No editing required.  I fouled them all, but I still hit them!)  A brisk walk down the Highline and we decided to sit outside, where only a few people decided to sit.  Eh, in the sun, it was actually pretty nice – and I kept my jacket off until the very end of brunch. 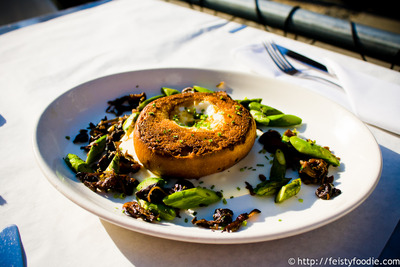 I really enjoyed Tasty Eating’s description of this dish – the toad in a hole – though I note now that hers was square, funny enough.  While I didn’t managed to get a photo of the egg oozing the way she did, this was just as glorious as she’d made it sound: crisp toast, oozy egg yolk, a delicious melty cheese on the bottom, with earthy mushrooms and asparagus balancing everything.  I found myself eating all the mushrooms and asparagus, honestly, swiped through the cheese – not because there was anything wrong with the egg and toast, but because the combination of the three was just so perfect already.

This was just our appetizer… for some reason I thought it was a small dish so we had three entrees.  Hahaha. 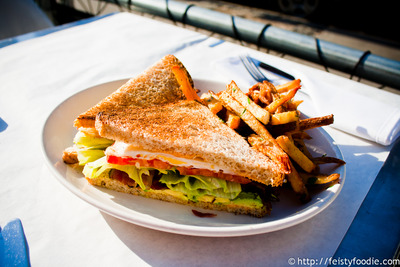 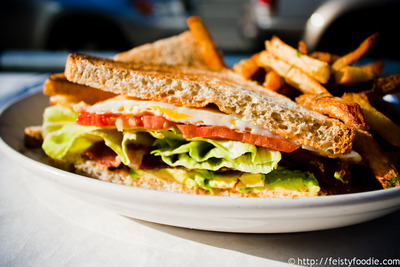 My choice was the hangover sandwich, despite not having a hangover, because I couldn’t imagine not enjoying what amounts to a BLT with a fried egg, avocado and Sriracha aioli.  While both DLS and I agreed that the Sriracha was barely noticeable, the sandwich itself was something akin to perfect.  Crisp toast with bacon providing the smoky, meaty, salty background, a fried egg to meld everything together – but wait, there’s also avocado … just glorious.  I could see ordering this again and again, though the fries were forgettable. 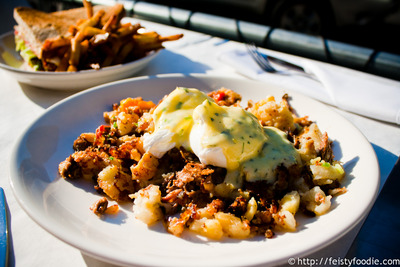 I was really happy when DLS said he wanted the brisket hash – okay, in all fairness, I said “I’m thinking of this, this, that or this” and he picked from my choices, but I really wanted this one! (we split everything) – perfectly poached eggs topped with bearnaise, roasted brisket tossed with potatoes and tomatoes… just brilliant, and perfectly executed.  Runny yolk spilling over the lovely brisket, each forkful of tender beef melting seamlessly with the bearnaise into our mouths, oh my.  It was sad that we wound up not being able to finish any dish in entirety, but this was definitely another winning dish.

Not a single thing eaten at The Highliner was bad, really – though the fries could be better, even they were good enough… just so much yum!

Yvo says: While service was pretty slow, I chalk that up to us being one of the few tables sitting outside on a slightly chilly day, so it was easy to forget we were there – I don’t think they’d anticipated anyone wanting to sit outside – overall, the food was great and reasonably priced.  Love the location (close to the Highline), and there are many other dishes on the menu that I want to go back and try – so I will definitely be back.  Yum!
recommended