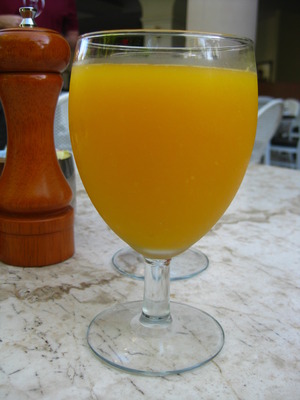 The next morning, I went to find breakfast somewhere outside of the resort before our next wedding group activity, and found myself at Longhi’s in the Shops at Wailea after the concierge said it was very good.  I was joined by the best man, EPS, and we both started with the fresh squeezed orange juice, which was pretty good.  Not pulpy which I don’t like. 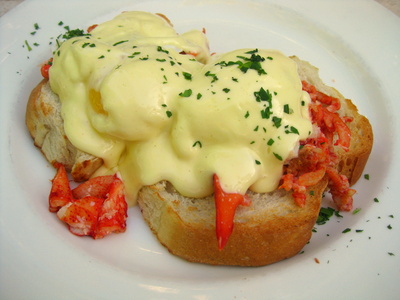 The menu was pretty standard breakfast/brunch fare, which meant it didn’t interest me all that much.  EPS and I both apparently don’t like sweet breakfast items – pancakes and the like, which is what most people rave about in Hawaii for breakfast it seems…  The only savory item that was marginally different from what I can get in NYC was the lobster benedict, so I decided to splurge and go for it. 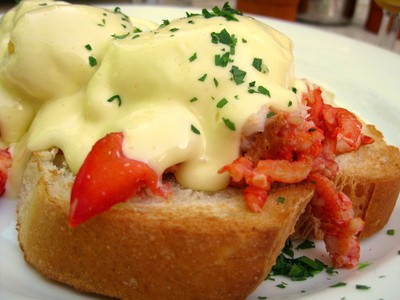 Interestingly, it was mostly body meat under that fluff of hollandaise, not the tail.  Wonder what they use the tail for… some other dish, I suppose.  In any case, the hollandaise sauce itself was impossibly fluffy – like it’d been whipped full of air! – and lemony, which I loved.  The hollandaise itself was fantastic – I really wanted to lick my plate clean, but I don’t know EPS that well and didn’t want to give him the wrong idea.  The lobster, though, was briny, and didn’t really go well with the hollandaise in my opinion… and the bread was just odd, didn’t work well – at least toast it!  It was super soft, which made it hard to cut easily with the side of my fork.  Weird.

I didn’t photograph EPS’s eggs florentine, but he seemed to like it as he ate it without comment – and if he hadn’t liked it, I’d have heard about it for sure.  We all would have.  Oh, and a few days later, he ordered it again, so I imagine he must’ve liked it the first time. 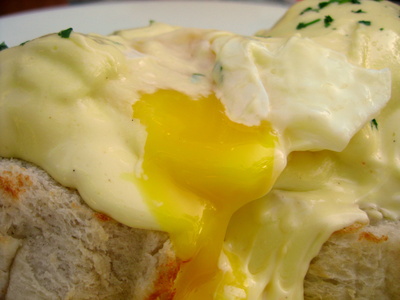 The eggs were poached properly on my plate, though interestingly, it seemed like there was hardly any egg white beyond a thin shell around the perfectly raw yolk.  The very runny yolk made me happy though!  I was perfectly satisfied and full after this, and it fueled me for our hike up Haleakala. 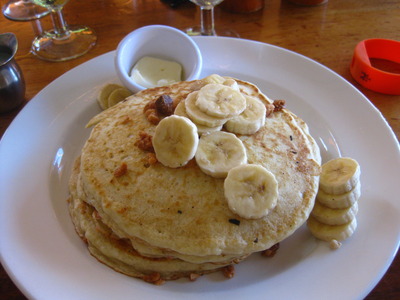 The morning after the wedding, a bunch of us met up for breakfast again at Longhi’s.  This time I opted for the Hawaiian pancakes with macadamia nuts, topped with bananas and served with coconut syrup.  I asked that they leave out the coconut syrup though.  (See my Mets watch on the table? Represent!)  The pancakes were super fluffy and quite tasty, but I discovered, once again, that if I don’t like a food, I shouldn’t try eating it because it’s unlikely I’ll suddenly like it.  I think I ate 1/3 of one pancake before pushing aside the whole plate to focus on something else.

Someone had mentioned really liking the home fries, so I added that as a side when I got the pancakes, just in case the pancakes proved too sweet.  Don’t get me wrong – these were tasty, and you know my love of potatoes, right?  But they weren’t particularly better than most places’ home fries.  Good, just not amazing, didn’t have anything to set them apart from other places really.

Yvo says: It’s really nice to sit and eat at this place, especially steps from our resort as it was, but given a choice, I don’t think I’d return.  Hands down I’d walk or drive somewhere farther away to enjoy something local, cheap and real… this felt a little touristy to me, which makes sense given that it’s in the middle of a bunch of high end shops (LV, Tiffany, Coach, Gucci, etc.).  Oh well, can’t complain about hanging out with my friends while we’re in Hawaii instead of going off by myself for better/cheaper food 🙂
eat there once if you’re staying nearby, but don’t go out of your way for this