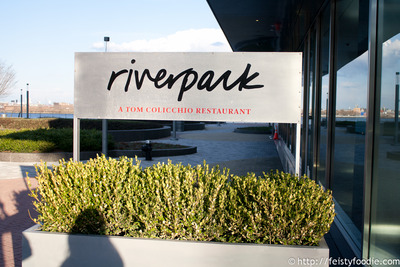 Avid readers of Feisty Foodie may have realized I haven’t been posting about the Birthday Bunch too much.  Life happened and recently, every birthday that was celebrated, I was unable to attend 🙁 so I haven’t seen my BB peeps in a while.  Thankfully, for Dr. PB’s recent birthday, I was able to go finally! though I was a little disappointed when Riverpark, Tom Colicchio’s newest restaurant, was chosen as the venue.  I’d not heard very positive things about it, plus it is on the pricey side… and I have been strapped for cash for a while.  Ah well!  It’s a birthday, so chin up and off we go. 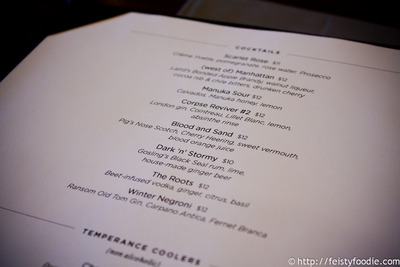 I’ve been very interested in cocktails lately, so the cocktail menu piqued my interest with its mix of classics (dark-n-stormy) with a bunch of very unusually named drinks. 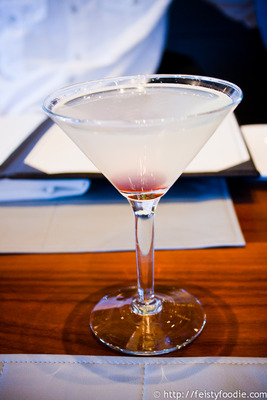 I went with the Corpse Reviver #2, whose description read “London Gin, Cointreau, Lillet Blanc, lemon, absinthe rinse” (I’ve been trying to try more Lillet Blanc drinks, to be honest).  I found the drink pleasant enough to sip, though I doubt I’d order it again. 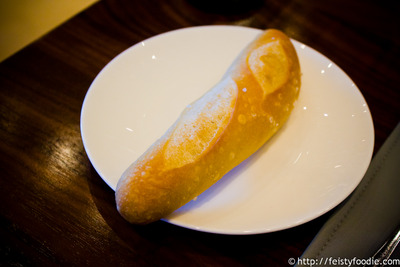 The bread they served us individually (no bread basket; a waiter came over to give us each a piece of bread, something I see far more often at very high end restaurants) was soft, warm, but very (soft) pretzel-like in texture and taste.   I thought it was tasty enough – and we were all starving at this point – though for a table of 10 people, two small dishes of butter was a bit hard to share.  Not that there wasn’t enough butter, but waiting for people to finish and then pass it down… or maybe it just bothered me because I was so hungry. 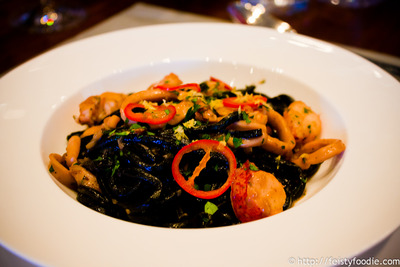 A large reason Riverpark had been chosen was the inclusion of squid ink chitarra on the menu.  When the girls and I went to Spain a few years ago, while I was obsessively ordering paella at every single restaurant (literally!) (ironic considering my general un-fondness for rice), they were discovering the joys of squid ink.  I believe it most often manifested itself as fideua, but in any case, at Riverpark, squid ink chitarra is offered both as an appetizer portion and entree portion, so most of the girls busied themselves ordering it one way or the other.  Above is the appetizer portion, I’m not sure whose plate I photographed (HB? she was sitting next to me)… but I know that at the end of the night, the general consensus was that it was only alright, nothing spectacular, and everyone was disappointed it hadn’t lived up to their expectations.  I opted not to try any. 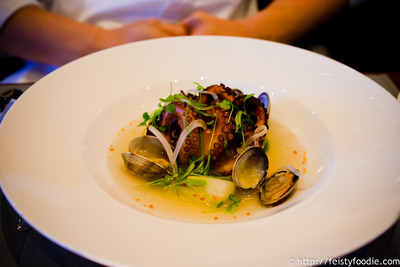 SW’s beau ordered an octopus and Manila clams dish, the exact details of which I forget.  He was sitting across from me so we chatted about the menu a little bit; we agreed that nothing on the menu particularly stood out to us, nor sounded awful.  It was just a regular menu with nothing to catch our eye. 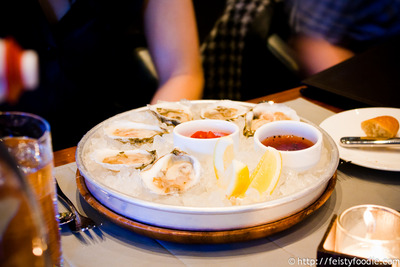 SW started with oysters; I think she enjoyed hers. 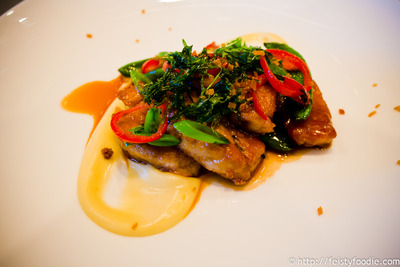 And my appetizer choice: sweetbreads.  I’m still semi-obsessively trying to find them as good as the first time I had them.  These were not.  They were sufficiently tasty, the slightest bit chalky (which has been my problem at successive restaurants since I first ate them), but nothing about the dish really stood out.  It was food. 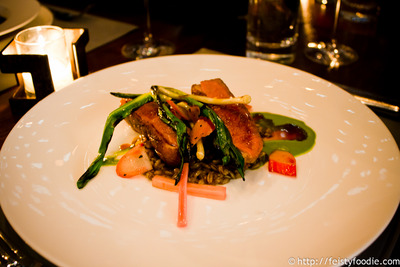 Entrees!  HB ordered the duck breast, which she said was good, but didn’t offer much other commentary. 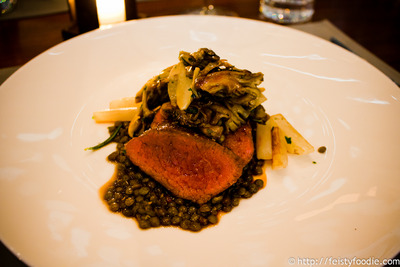 For my main course, I ordered the roasted leg of lamb.  I was surprised when it came to the table already sliced; the name of the dish had led me to think that it would come with a bone.  Tender, lacking any trace of gaminess, and again, tasty enough, but not special or unique… it was good. 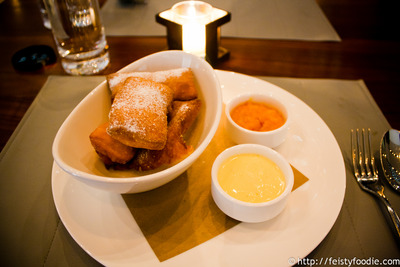 My dessert, beignets, arrived with two dipping sauces.  One of them was custard… and you know how I feel about custard, right?  Well, unfortunately, the beignets themselves – a LOT of beignets in that bowl, by the way – were not beignets.  I really hate when restaurants call something a beignet and they are just fried dough.  Sorry, it’s a pet peeve of mine; just call it fried dough, or a doughnut (if that’s what it is), or zeppole.  Come on.  These were just fried dough, which is OK, but I wouldn’t have ordered it if it were going to be just fried dough.

*So some pedants out there will say “beignets are fried dough” – and yes, they are, in the most general sense of those words.  Beignets are made of fried choux dough, or the same dough that makes cream puffs.  They are airy, light, and biting into one is like biting into a cloud of powdered-sugar-covered-joy.  Fried dough as a descriptor tells me that the dough is slightly denser, less air pockets, and I think of something more like a zeppole – heavy, dense, also covered in powdered sugar, but I eat one and I feel a little greasy.  Beignets, I can pack away 3 or 4 or 5 (I think I ate 5 in one go, one hazy morning at Cafe du Monde in New Orleans) and while I won’t feel thin, I also won’t feel covered in grease and oil.  Is this picky of me?  Sure is, but when there are multiple names to describe a dessert that is similar to others, use the right one so I know what to expect.  Thanks. 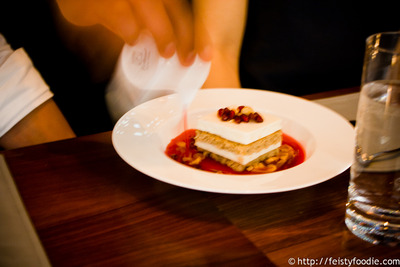 SW ordered the hazelnut financier, which she really liked.  I tried a small bite and was surprised at how creamy and light this was, and enjoyed it a lot. 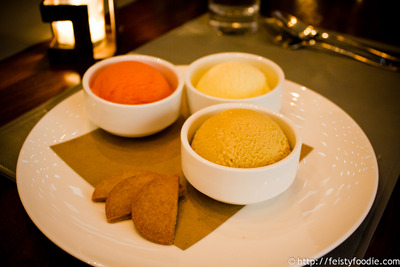 HB and her BF ordered a trio of ice creams to share.  One of them was beer ice cream.  I tried a small swipe and agreed that it tasted like Guinness, though I have limited experience with Guinness (aside from one failed attempt to chug it, and another where someone insisted it was the best accompaniment to a burger there could ever be).  (It’s not.) 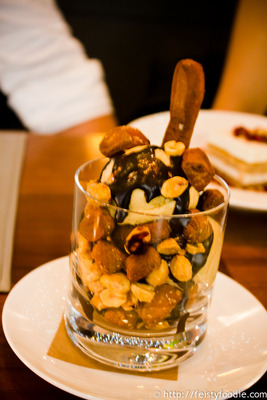 And then this appeared in front of me: the server came and said “This is compliments of the kitchen; a beer sundae.”  There was no explanation why, although I’d asked a few questions about the dish before choosing my dessert.  In any case, the description had caught my eye because aside from containing beer ice cream, it had pretzels in it!  Which wound up being the best part; the chocolate sauce was nice over the beer ice cream, but the taste of the beer ice cream wore on me after a while and I found myself digging out the pretzel bits to eat, with a small bit of ice cream and chocolate sauce.  Oh, and of course I shared with the rest of the table!  We found it a bit odd that, aside from no explanation, they brought a single dessert to a table of ten people, and placed it on one end of the table… far away from the birthday girl (and yes, we told them it was her birthday, so they put a candle in her dessert).  Very curious, though not unappreciated.

We stumbled out of the oddly-placed restaurant – in the bottom of a medical research facility on the East River – and into the lobby of said research facility.  It had been a pleasant enough dinner, though none of us were amazed, and for about $70 a person (including paying for the birthday girl, of course), well… it was just pleasant.

Yvo says: Overwhelmingly average.  The food was good, but not unique, not amazing, not even done particularly well.  I feel confident in saying that I could make food at home that would be on par or perhaps even better, since it would be catered exactly to my palate preferences.  This isn’t to say it was bad, though, just that for what we paid and got, I wasn’t impressed whatsoever and would not return.  If the prices were lower, I might be more inclined to say “Well, it was good and it was worth what we paid,” but given the prices… it was definitely not worth it, and I won’t be going back.
not really worth the price paid; the view is pretty nice though